Who’s That Monkey on Peru’s Money?

If you buy a cold beer or a hot coffee in Peru, you may get an extra treat in return. A gleaming silver monkey, right in your palm. It’s the rare Yellow-tailed Woolly Monkey, which has been commemorated on Peru’s 1 sol coin (30 cents) as part of a new endangered species series. 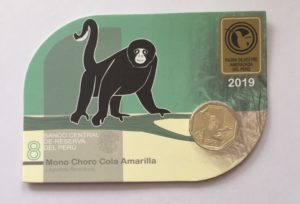 The coin has a whimsical look, almost like something you’d find in a pirate’s long-lost buried treasure. That’s fitting because it symbolizes a native Peruvian species that was “lost” for nearly half a century and could vanish forever without diligent conservation efforts. 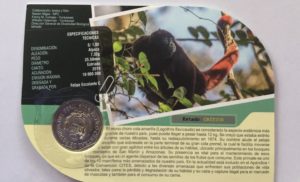 There may be as few as 1,000 individual Yellow-tailed Woolly Monkey individuals living in northern Peru today, making them a Critically Endangered species on IUCN’s Red List of Threatened Species. They live in dense cloud forests in the eastern foothills of the Andes, at an elevation of more than 6,000 feet. They eluded the scientific community’s sights for almost 50 years before Global Wildlife Conservation’s Chief Conservation Officer Dr. Russell Mittermeier and his team rediscovered the monkey in 1974, many had believed it to be extinct.

In 1971, Mittermeier graduated from Dartmouth College and headed to South America with few possessions and lots of curiosity. He trekked throughout the continent looking for primate research opportunities. In his intensive senior year studies of New World monkeys, Mittermeier had learned that the Yellow-tailed Woolly Monkey (Lagothrix flavicauda) had been discovered in 1802 by Alexander von Humboldt, the great German explorer and naturalist. But the species was not described until 1812 and Humboldt himself only saw skins of the animals being used as saddle covers by muleteers—he himself never actually saw it in the wild. From its discovery until 1925 and 1926, it had remained largely unknown since then, except for five individuals collected in the wild by two museum expeditions. In Lima, Peru, Mittermeier asked Dr. Hernando de Macedo-Ruiz, then director of the natural history museum, about the monkey.   He knew little about it, but, as a result of that conversation, they decided they should go look for it.

Their plan came together in 1974 as a quickly assembled, bare-bones expedition. The region near the Yellow-tailed Woolly Monkey’s habitat had only gotten roads two years prior, and this inaccessibility had kept the monkey secluded from humans in its remote mountain habitat. The group traversed the bumpy roads to the foothills in buses and on the back of trucks.

“A couple of times we got to villages where there were no hotels, so we just slept on the street,” Mittermeier says. “It was really low budget. The police would stop us in every village wondering what we were up to because who on Earth would be going to such a remote area looking for a monkey?”

At one point the team was on a truck that stopped to pick up some hunters. Mittermeier asked the hunters what they had in their bags, and one pulled out a monkey skin. It was undeniably a Yellow-tailed Woolly Monkey, with its thick, gorgeous mahogany fur, white nose and yellow band along the tail. So it indeed still existed!  The team  hiked up into the cloud forest, but did not spot a live monkey on that particular trip. But during their return journey, they stumbled upon a Yellow-tailed Woolly Monkey being kept by a villager as a pet.

“With great effort we managed to convince the young lady who had it to part with it,” Mittermeier says. “We took it back to Lima, made a huge fuss about it, and had a press conference that started the process of turning it into a national icon. It was kept for years at the museum in Peru and it became a real attraction.”

Throughout the 1970s and ‘80s, Mittermeier and his team worked with local organizations and communities to develop conservation strategies, raise awareness among residents and create protected areas within the monkey’s habitat. A young Peruvian researcher named Mariella Leo Luna took it upon herself to study the animals, and she has been a leader in its conservation ever since.  Mittermeier finally caught the Yellow-tailed Woolly Monkey on camera as part of a 1983 World Wildlife Fund expedition led by Mittermeier and  Mariella Leo Luna. 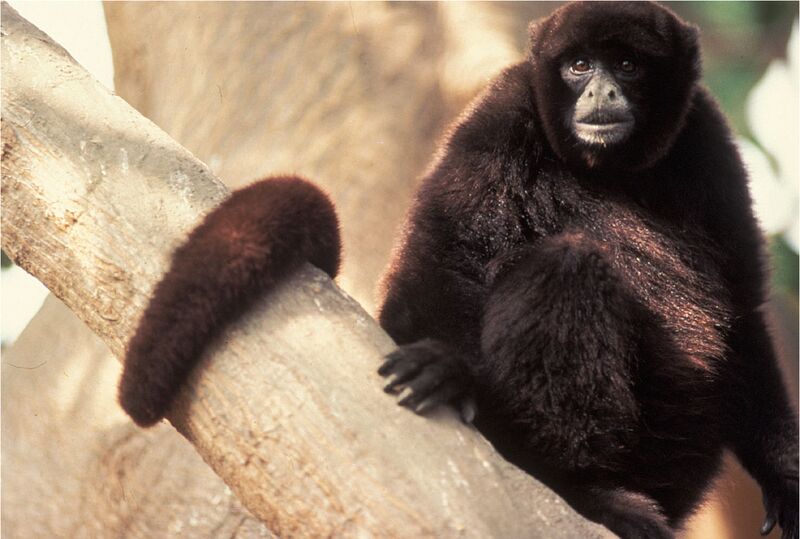 The Yellow-tailed Woolly Monkey’s habitat was shrinking due to farmers cutting down and burning cloud forest for farmland and timber. Because the forest’s soil is poor for farming, they had to carve out larger and larger plots. This threatened not only the monkeys, but also humans. Water runoff from cloud forests is a vital source of irrigation for the more fertile farmland below, and the forests prevent mudslides during torrential storms. Hunting for meat and for pets was also a major threat to the monkeys at the time.

As outlined in the 2018 study Primates in Peril (co-authored by Mittermeier), agricultural expansion and human population growth are still top drivers of primate population decline worldwide. Hunting, illegal pet trade and infectious disease are among other factors.

In Peru, the protected areas that were created as a result of these early efforts, including Río Abiseo National Park and the Alto Mayo Protected Forest, are still in good shape today. Hunting is largely under control. Leo Luna worked with local organizations to educate residents about the need to protect the Yellow-tailed Woolly Monkey, and a new generation of primate conservationists, has picked up the work—notably another Peruvian woman, Fanny Cornejo, who is now finishing her Ph.D. at the State University of New York at Stony Brook. Campaigns featured posters of the beautiful animal, and Peru issued a series of postage stamps bearing its likeness in the 1980s. Much like its current visage on Peru’s currency, this made it a symbol of the importance of conservation.

“The coin is a very good way to increase visibility,” Mittermeier says. “In Brazil, the Golden Lion Tamarin is on the 20 real note, which is equivalent to the $20 bill. These are species that we’ve focused a lot of attention on over the years that have actually gotten very nice attention in their countries of origin, with major conservation activities resulting from this visibility.”

Over the past few years, GWC has supported Yellow-tailed Woolly Monkey conservation with grants through the Margot Marsh Biodiversity Foundation and the Mohamed bin Zayed Species Conservation Fund, organizations where Mittermeier serves as president and advisory board member, respectively.

GWC also works with other partners to protect cloud forests and their diverse ecosystems around the world, through projects such as our art auctions with Christie’s and our support to establish nature reserves including Grand Bois in Haiti and Cleopatra’s Needle in the Philippines. We also created the Search for Lost Species initiative to find the 25 “most wanted” species in the world – rare and elusive animals who serve as flagships for conservation.

Learn more about our work to save cloud forests, primates and other rare species.