Wanted: Bird With an Orange Wattle, Extraordinary Call, and Aura of Mystery

Can you hear that?

The sweeping ring of a cathedral bell?

The haunting timbre of an organ?

Or is it simply a trick of the imagination, the taunting mischief of mimicry?

This is the mystery before a small team of ornithologists and volunteers on New Zealand’s South Island who are passionately committed to rediscovering and conserving the South Island Kōkako, a beautiful and ancient grey bird that has seemingly vanished from the forests where it was once widespread.

But there have been just enough clues—the glimpse of a faded old orange wattle here, the distinct haunting call breaking through the everyday songs of Tui and Bellbirds there—to keep the kōkako’s most staunch devotees out on the search for it, even as the rest of the country has seemingly given up hope on this lost species, relegating the evidence like this 2017 recording to nothing more than a red herring.

“It is not possible to read the accounts of likely kōkako encounters from authoritative observers without believing that their merit still outweighs armchair assumptions of extinction,” said Dr. Euan Kennedy, a trustee of the South Island Kōkako Trust, a small trust dedicated to trying to find the bird so that it can be saved from extinction. “While the evidence of possible survival remains compelling, we owe it to the kōkako to persist. Discovery of the bird would endow the Kiwi sense of identity with a richer connection to New Zealand’s remarkable natural heritage. What a story it would be.”

And what a story it is. The South Island Kōkako, like many other species lost to science, straddles fact and fiction, past tense and present tense. But spend any amount of time chatting with Rhys Buckingham, a retired ecologist and former New Zealand Forest Service employee who has been on the kōkako’s trail for the last 43 years, and you’ll be left with no choice but to believe.

In 1977 Buckingham was exploring Lake Monowai, where he heard a bird call that he had never heard before. It was the first of many times he is certain he heard the kōkako’s call and that first time set in motion a life-long mission to find the bird. 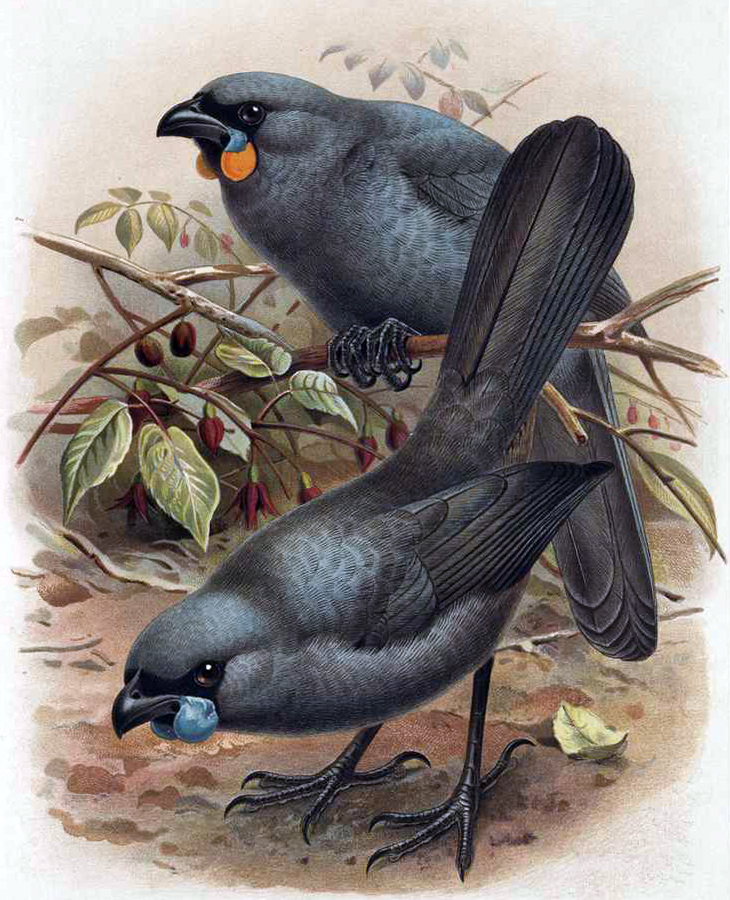 “I’d never heard a call so staggeringly beautiful as the long sequence of loud cathedral bells this bird made in the distance,” he says. “I’ve traveled in South America, the Himalayas, lots of places in the world, and I’ve still never heard a bird that has a call so remarkable. A call that hypnotizes.”

That call, which was once common, is now a relic of a New Zealand rich in bird life. Eighty percent of the country’s native bird species are at some risk of extinction, including 93 species found nowhere else. About 50 native birds have gone extinct since people arrived in New Zealand, with habitat destruction and introduced predators—such as feral cats, ferrets and rats—as the primary threats, especially to birds who never faced any predators historically. Kōkako populations, like GWC priority species Kākāpō and Kaki (or Black Stilt) and others, have plummeted precipitously.

The last officially accepted sighting of a South Island Kōkako was in 2007 near Reefton on the west coast of the South Island. The accepted record before that was near Makarora (Aspiring National Park) in 1967. In 2008, the New Zealand Department of Conservation declared the species extinct, but overturned that decision in 2013 following the acceptance of the 2007 sighting. Today the IUCN Red List of Threatened Species classifies the South Island Kōkako as Critically Endangered, while the New Zealand Department of Conservation classifies it as Data Deficient.

Part of what makes confirming the bird’s ongoing existence so challenging is that it is seemingly impossible to get a photo of one—the bird is quiet when it needs to be, blending in well with its surroundings. In fact, there is only one known photo of the bird, and that is from the early 20th century. Its call has also been in doubt because New Zealand has a number of bird species that can perfectly mimic other sounds. If the call is coming from these copy-cats, the question then is whether those mimickers are imitating the sounds of a kōkako they recently encountered, or if they have learned the song over several generations from a bird that is now long gone. 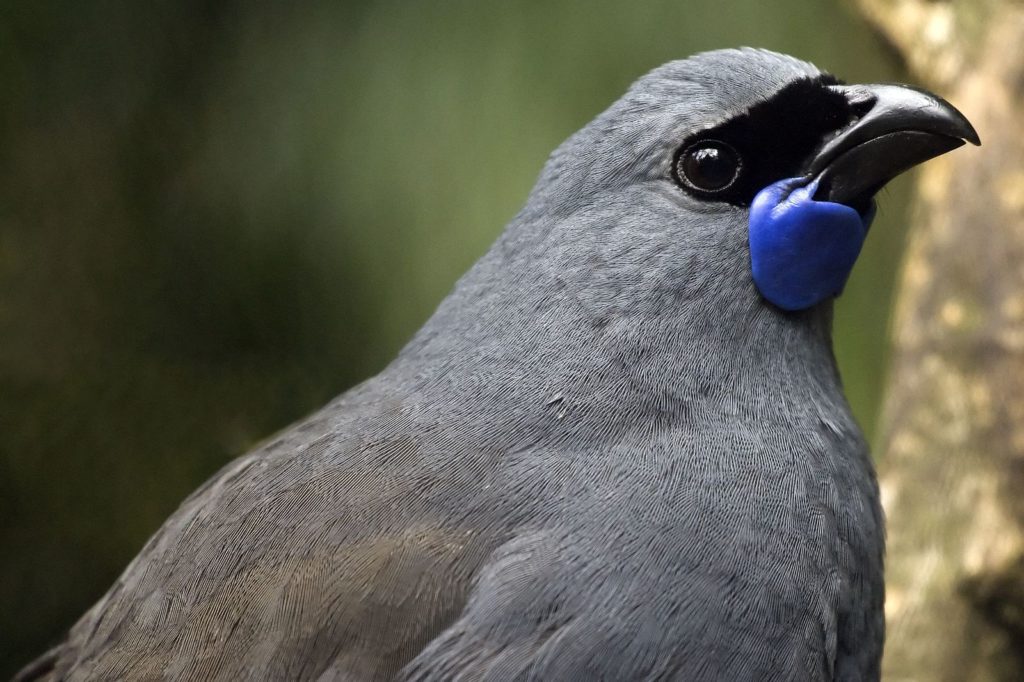 The South Island Kōkako's sister species, the North Island Kōkako, has a blue (instead of orange) wattle and a slightly different song. (Photo via Wikimedia Commons)

Buckingham recently completed a search over 20 years in a small area at Venture Creek in South Westland. While he believes there were once several birds living here, now he’s not sure if there is even a single kōkako left in the area. In the course of his more than four-decades-long search on Stewart Island and South Island mainland, he has seen what he is sure was a South Island Kōkako on at least two occasions, though he saw the distinguishing wattle only once, in a remote area of a forest toward the top of South Island. During that sighting, the bird progressed down the limb of a tall beech tree gleaning bugs or honeydew in a most unusual way, Buckingham says.

“At first it walked upright then suddenly spun upside down, continuing in that way and pace to the base of the bough,” he says. “It momentarily turned upright and paused so I got a good view of the side of its head, notably the pale straw-colored wattle and distinctive bill before seemingly vanishing in thin air. Before this sighting I heard the bird’s haunting song and found abundant disturbance of moss on the forest floor that I believed to have been made by the bird.” 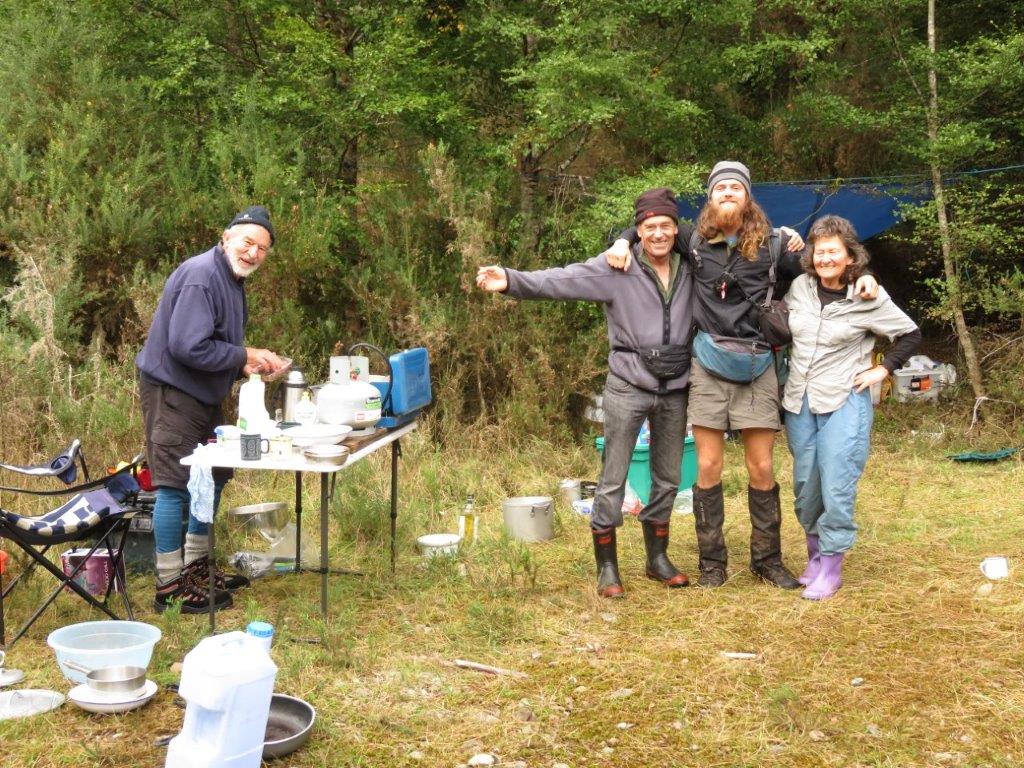 Most recently he says he is 99.9 percent sure he heard the bird just last month when he was changing batteries of camera traps he has set up in a new study area in Abel Tasman National Park, near his home. The calls were distinctly kokako-like and very loud, he says, and had an immediate effect on local songbirds that copied the calls and launched into a cacophony of song and alarm, indicating their surprise. Here is a sample of what Buckingham recorded at Venture Creek in 2010, a possible South Island Kōkako call-and-response that has been reviewed by North Island Kōkako vocalization experts:

“My main goal is to save this beautiful bird from extinction,” Buckingham says. “But I also want future generations to be able to hear these absolutely remarkable calls. As this bird becomes more and more uncommon, desperately uncommon now, it’s obviously going to be harder than ever to find it and get a conclusive photo of it.”

Since the search has only continued to get harder, in 2017 the South Island Kōkako Trust put out a call to all residents on the South Island to help get photographic evidence of the bird—for a $10,000 NZD reward. This came after years of intensive field searches that hadn’t resulted in conclusive enough evidence that the bird is still out there.

“The trust decided that we can’t just have one or two people searching,” says Inger Perkins, manager of the South Island Kōkako Trust, which celebrated its 10-year anniversary in May. “We need everybody searching everywhere, all the time. Now the public is our eyes and ears.” 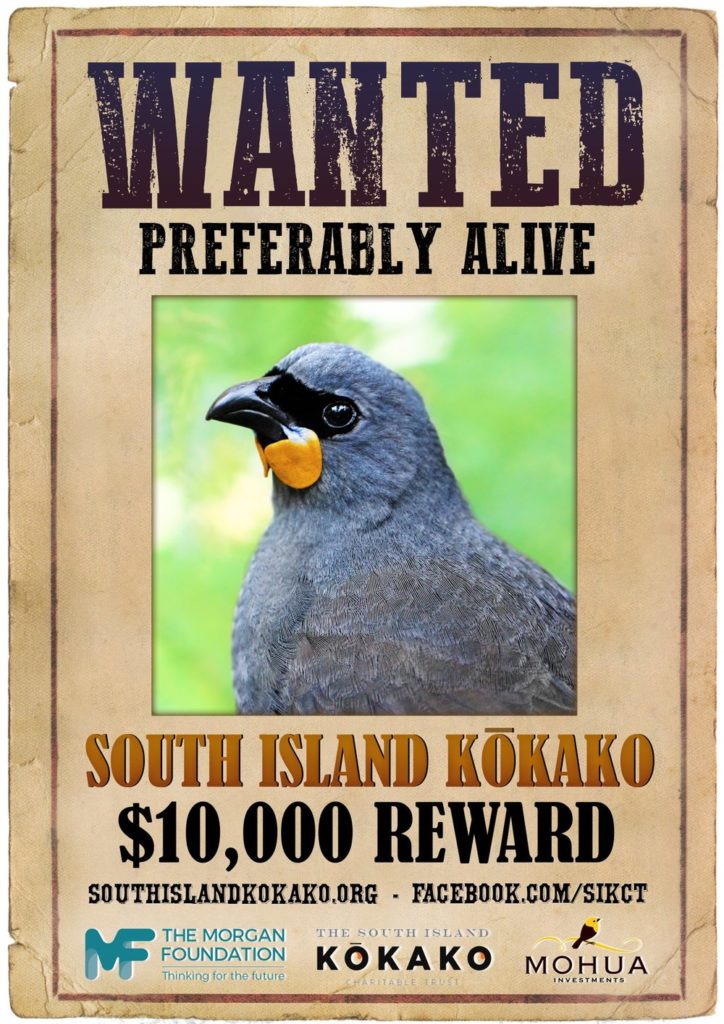 Since launching the prize, the trust has received 200 reports of possible kōkako encounters, adding to another 300 the trust received before then. In April of this year they received two reports from South Westland that they consider “probable” and another two in in May that they ranked as “possible.” They have also developed an enhanced GIS-based system to encourage and receive new reports and to prioritize these for verification. With this data, they’ve created a publicly available online map that shows the location of all of the reports they’ve received.

“Everything has a location, so to me, maps are always the logical starting point for understanding and solving a problem,” says Jordan Miller, a South Island Kōkako Trust volunteer and GIS whiz. “Maps are a great tool for encouraging public involvement in the search. GIS also helps identify trends and patterns that you might not notice otherwise. When combined with other data—like predator control areas, vegetation, elevation, etc.—the result can help inform where to focus search efforts.” 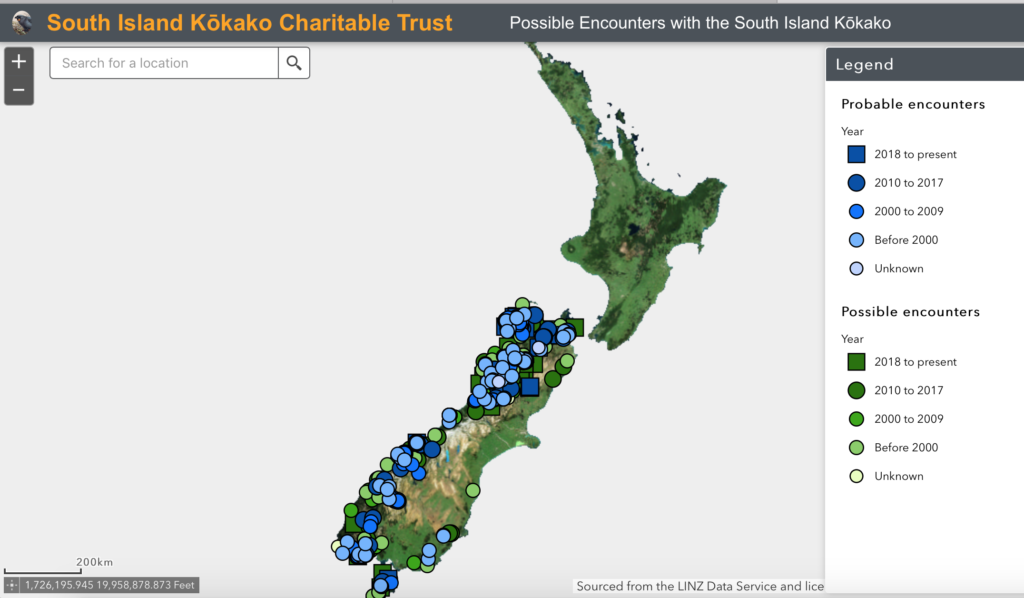 The trust is also investing in new cost-effective techniques, including remote sound and video recording to improve the chances of verifying the existence of the lost kōkako. They have proposed a strategy for systemic surveys by professionals across six priority sites based on recent reliable reports.

And if the South Island Kōkako is conclusively rediscovered? It could become the next in an impressive line of New Zealand birds that are now the focus of successful conservation efforts since their rediscovery, including the Kākāpō, Takahē, New Zealand Storm Petrel, Chatham Island Taiko, Chatham Island Black Robin, and Orange-fronted Parakeets. Often the rediscovered populations are translocated to predator-free islands and become part of a conservation breeding program that eventually results in releasing the birds back into the wild. 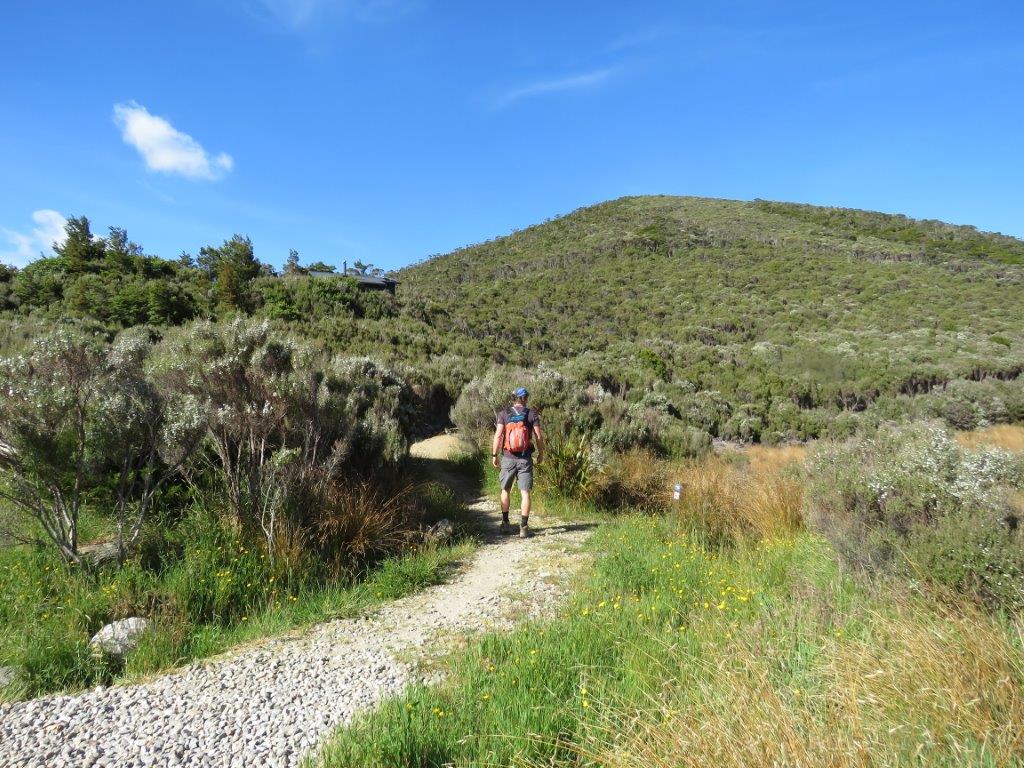 Miller, who has accompanied Buckingham on a couple of search expeditions, heading into Kahurangi National Park along the Heaphy Track. (Photo courtesy of South Island Kōkako Trust)

Kennedy tells the story of time he spent listening to the call of what was possibly the last of the once-widespread, abundant populations of New Zealand’s Kākāpō, the world’s largest parrot, before conservationists intervened.

“We had pitched our tent on a narrow ridge above bush line, not far from the track-and-bowl system of what was very possibly the last Kākāpō on mainland New Zealand. The bird (a lonely male) was booming nightly in the long-doomed expectation of attracting a female. We were each of us overwhelmed by a wrenching sense of tragedy and loss. We were touching history in the presence of this bird—the very last heart-beat of millions of years of Kākāpō in our mainland wilderness. A last glimpse of ancient New Zealand.

Standing in the forests once populated by South Island Kokako evokes in me the same abiding sense of loss. It is the silence which speaks most loudly of this.”

Yet, today there are more than 150 Kākāpō in the wild. And in the silence that Kennedy speaks of, there are still credible reports of the kōkako’s haunting call.

That call of hope?

“The kōkako’s story lives and it continues and we haven’t given up,” Perkins says. “We aren’t giving up.”