This story first appeared earlier this year in THE TORTOISE (volume 3, number 1), a publication of the Turtle Conservancy.

When catastrophic blazes tore through Australia, a rare turtle might have vanished with the river--these scientists wouldn't let that happen.

The worst fires on record had been raging across Australia since October 2019—destroying tens of millions of acres of habitat and thousands of homes—but finally, the rains had come. Torrential downpours in February caused widespread flooding, helping to extinguish the blazes in New South Wales.

But relief from the fi re didn’t mean the country’s wildlife was suddenly safe. The floods posed their own threats to animals, and Dan Rumsey, head of reptiles at the Australian Reptile Park, knew he had to act fast. He had just received a phone call from a local landowner who had spotted a turtle nest full of eggs on the riverbank outside her home in New South Wales, where it could easily be carried away by the water or raided by predators. It took Rumsey only moments to make a critical decision: launch an emergency rescue mission.

Rumsey and his team recovered the eggs, knowing that every single hatchling makes a difference in the fate of the Manning River Turtle (Myuchelys purvisi)—a rarely seen Endangered species found nowhere else in the world. Restricted to a single river system, the turtles are extremely vulnerable to habitat destruction, predation by feral foxes and pigs, and E. coli from agricultural waste. Increased drought and wildfires threaten to dry up vast tracts of their river habitat and reduce stretches of continuous river to shallow muddy pools, while other dramatic climate events bring their own challenges. 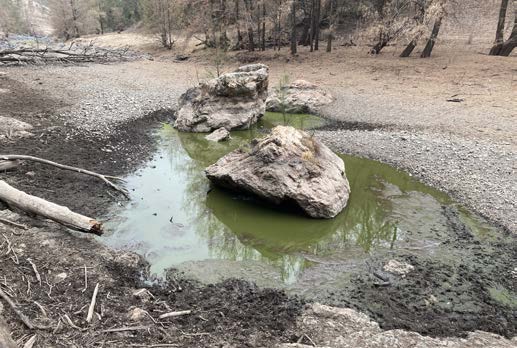 The fires reduced portions of the Manning and Hunter Rivers to muddy pools and eliminated other stretches entirely. (Photo courtesy of Australian Reptile Park)

“Manning River Turtles have been around for at least 80 million years,” says Rumsey. “They have survived past the age of the dinosaurs, through rising and falling sea levels, and through geological changes on the planet. Humans, however, are put-ting their impressive hardiness to the test, push-ing these unique reptiles to the brink in just a few hundred years.”

Ten tiny turtles successfully hatched from the nest at the park in March, 48 days later. Beginning in December 2019 when the fires were spreading, Aussie Ark, in partnership with the New South Wales National Parks and Wildlife Service, rescued more than 215 Endangered turtles. Some of these individuals came into Aussie Ark’s care while others were relocated. In addition to Manning River Turtles, they also rescued Hunter River Turtles (Emydura macquarii gunabarra), which are only found in the single river for which they are named. Some of the animals were relocated to deeper pools just as their habitat was drying up, while those in poor health were kept in human care and rehabilitated until they could safely be released back into the wild. Teams of two to five people spent more than 198 hours in the field doing turtle relocations.

“What we saw firsthand was mass-scale burn-ing across the land and tree clines that had never dried up in recorded history, suddenly dry,” says Tim Faulkner, president of Aussie Ark. “This was the result not just of drought, but also the illegal and unregulated removal of water. People pumped water out of the systems until there was none left. When the water dries up, cattle congregate around whatever water is left and end up using it as a toilet, leaving behind a reservoir of disease in their feces. What we saw was a mass die-off in turtles that were just being overcome by E. coli.”

If the world is not a friendly place to the Manning River Turtle—which was declared an Endangered species in 2017 and is only found in New South Wales in the Manning River—then the Australian Reptile Park is a temporary reprieve for the individuals who have found themselves here in recent months. In addition to the ten eggs, Aussie Ark collected six adults and a subadult Manning River Turtle during the rescue effort to start the first-ever conservation breeding program for the species. One of them, a gravid female, laid her own clutch of eggs at the end of February, and those hatched in early April. 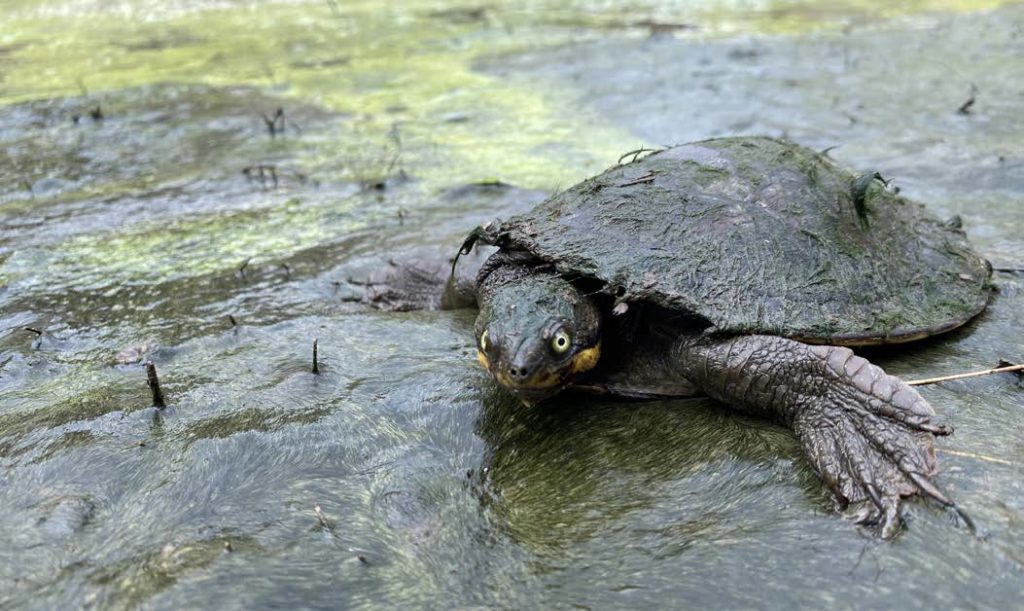 It was not mere serendipity, however, that allowed the Australian Reptile Park to take these turtles in so quickly. Aussie Ark and the Australian Reptile Park had joined forces in 2017 to write a proposal for the conservation breeding program and launched a successful month-long crowd-funding campaign to raise funds to build facilities for an insurance population of the Manning River Turtle in 2018. Both the Turtle Conservancy and Global Wildlife Conservation have supported these efforts.

Thanks to these carefully laid plans, Aussie Ark’s Manning River  Turtle conservation breeding program was ready to receive its first residents in early 2020. The specialized facility includes ponds of 1,000 gallons of water for every three adult turtles, smaller ponds for juveniles, a nursery of tanks for young turtles, and incubators for eggs.

All of the most recent hatchlings are being housed in their own tanks, safe for now from the elements and hungry foxes. Eventually Aussie Ark will decide how many of the hatchlings will stay in the conservation breeding program and how many will be released back into the wild—in the exact place they were found. Those that are returned to the wild will be fitted with radio transmitters to help the team track dispersal patterns and survivorship rates. 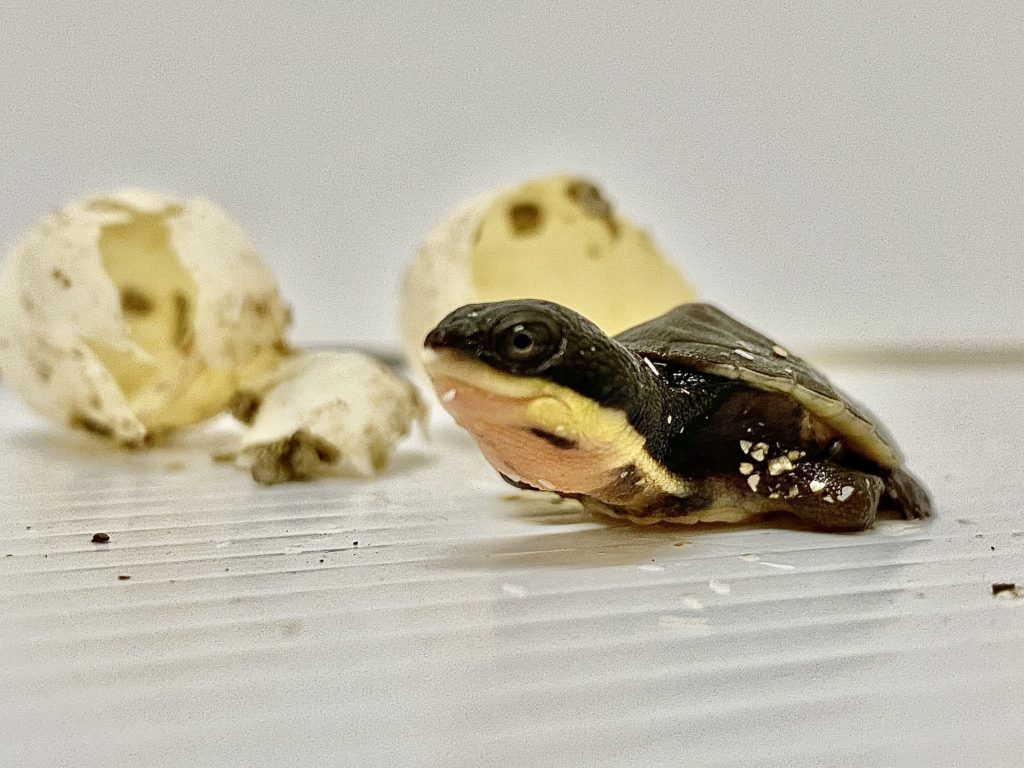 Ten Manning River turtles hatched from a clutch collected in the wild at imminent threat from flooding, invasive predators and cattle. (Photo courtesy of Aussie Ark)

Ultimately Aussie Ark aims to have a founding population of 20 turtles, and to breed the founders and return 200 to 300 turtles back to the Manning River each year as part of a strategy to help rewild Australia.

“I will consider the project a success when we’re returning hundreds of juveniles back to the river system annually, but the hatchlings mark a truly joyful way to kick off those efforts after so much heartache,” Faulkner says. “They bring a new wave of hope for the species and its survival.”

This kind of headstart insurance program gets around one of the major threats to Australia’s turtles: introduced feral foxes that feast extensively on turtle eggs, which has resulted in a population of aging turtles and few young turtles to replace them. Those turtles that do hatch successfully are then subject to habitat destruction (primarily for cattle ranching for beef) and disease, especially during drier times.

“A successful breeding program would ensure the long-term survival of the species,” says Ricky Spencer, an associate professor at Western Sydney University and a turtle champion who is providing expertise to Aussie Ark and conducting research to support the success of the conservation of the Manning River Turtle. “Continual release of juvenile turtles ensures that the negative impacts of invasive species like foxes can be averted. Foxes destroy up to 95 percent of turtle nests throughout Southeast Australia, and they also kill nesting females that emerge to nest on land.” 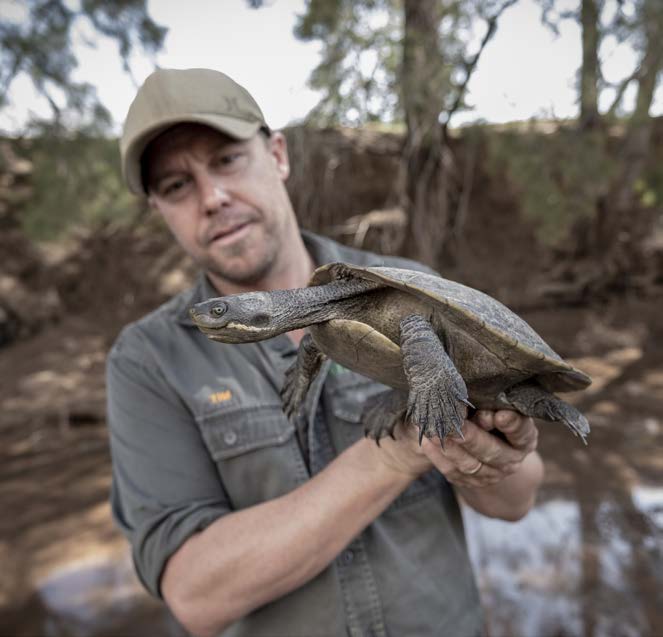 This is bad news not only for the turtles, but for the ecosystems that depend on them to maintain balance. Short-necked turtles like Manning River Turtles are the river’s cleanup crew, eating vegetation, fallen fruits, leaves, algae, and anything else that dies and falls into the water.

“The loss of Manning River Turtles from the wild would be a severe blow for the riverine ecosystems of the Manning Valley,” says Andrew Steed, a data support officer at the New South Wales Office of Environment and Heritage, which is leading the country’s freshwater turtle conservation efforts. “Their ability to clean up waterways means that if they were to disappear in the wild, water quality would likely be reduced. The removal of their role in the food chain could see dramatic changes in the number and types of aquatic organisms, possibly leading to phenomena such as growth of aquatic vegetation and outbreaks of cyanobacteria (also known as blue-green algae), which are microscopic bacteria found in freshwater lakes and streams. These bacteria can produce toxins that can adversely affect people, livestock, and pets that swim in and drink from the algae-contaminated water.”

“We want to demonstrate that we’ve been able to overcome every obstacle, including wildfires and politics, to save the Manning River Turtle,” Faulkner says. “Let’s show the community, the government, Australia, and the world that we can do this, that we must do it, that even in the face of all of the recent sadness and destruction, we can still find hope for planet’s most vulnerable residents.”