By Global Wildlife Conservation on October 23, 2018

Six years ago a conservation biologist and his friend, a herpetologist, hiked into a little-explored rainforest in northern Ecuador to conduct the first-ever survey of reptiles and amphibians in the site. On the very first night in the field, they stumbled upon a tiny toad about 100 meters from their cabin—a toad that left them perplexed.

“At first, we didn’t know what it was,” says Sebastian Kohn, the conservation biologist on the trip. “But we could tell it was something special.”

And it was. It took scientists more than six months to identify the toad based on photos that Ryan Lynch, the herpetologist on the trip, brought back to Quito. What they found delighted them: it was the long-lost Tandayapa Andes Toad (Rhaebo olallai), found in a place the species hadn’t been found before, in a region that is staggeringly remote and difficult to explore.

Until then, biologists had feared that the toad was extinct. Only the people who discovered it had ever seen it alive in the wild—that was in 1970—and it was only otherwise known from grainy black-and-white photographs and one preserved individual. But here it was, alive, vibrant, and seemingly thriving in this one small locality. 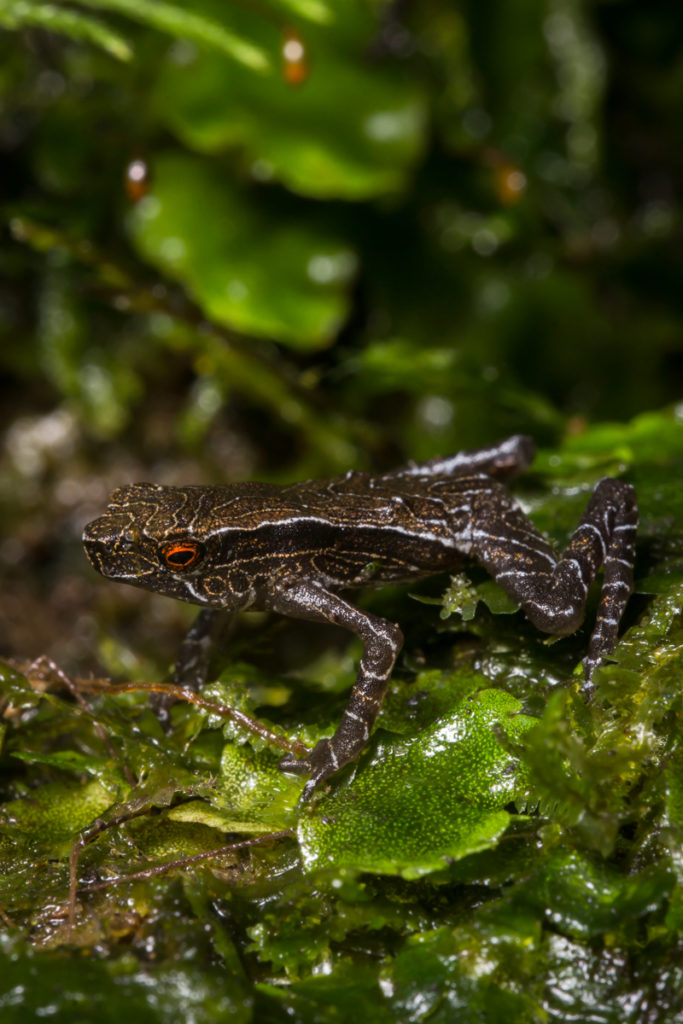 The Tandayapa Andes Toad had been lost to science since 1970. (Photo by Ross Maynard, The Biodiversity Group)

Since then, scientists have had the unprecedented opportunity to study the species; to learn about its ecology, its diet and reproduction habits, how it communicates, and how it fits into the broad mosaic of the world.

Yet the world around it is under threat. An Australian mining company, BHP Billiton, has received permission from the Ecuadorean government to mine gold and copper in the very area the toad calls home, its last-known refuge. Open-pit mines would do what Kohn calls “irreparable damage,” guaranteeing the extinction of the Tandayapa Andes Toad, without any chance of a serendipitous rediscovery.

The toad’s habitat is a special place. The protected area in which it lives, a private preserve, comprises about 600 hectares. This incredibly diverse and unique place, now owned and operated by Fundacion EcoMinga, is at the crossroads where the flora and fauna of the high Andes meet that of the fantastically biodiverse Ecuadorian Chocó. Here, Spectacled Bears share space with Endangered Jaguars, and all sorts of unusual wildlife.

Based on a recent reassessment, the toad’s IUCN Red List status will likely be changed from Data Deficient to Critically Endangered. (Photo by Ross Maynard, The Biodiversity Group)

“The area is so critically diverse,” Kohn says. “There are at least two species there that will disappear if the mining continues—this once-lost frog species, and a newly discovered species of frog that we are in the process of describing. On every large expedition, when we have several people for several days searching only for reptiles and amphibians, we come out with several new species. And we still have a lot of land to cover. Earlier this month, we had a very good sighting of a Critically Endangered Brown-Headed Spider Monkey. In every species group, we find incredible things. It keeps amazing us, every time.”

The known habitat of the Tandayapa Andes Toad comprises only two square kilometers of the area—less than 500 acres—all of which are threatened by mining concessions. At the time that Kohn and Lynch rediscovered the toad, the IUCN Red List of Threatened Species classified it as Data Deficient, meaning that there wasn’t enough information to determine its extinction risk. Based on the rediscovery, the toad’s status will likely be changed to Critically Endangered—an assessment run by our manager of IUCN Red List assessments, Jennifer Luedtke, and our program officer of IUCN Red List assessments, Kelsey Neam.

“With the imminent threat of large-scale open-pit mines destroying the area, the Red List is crucial in raising the alarm of this impending extinction,” Kohn says. “The change in the toad’s status will make it easier for us to raise funds, awareness and interest in the species while this threat looms.”

For 40 years, amphibian experts, conservationists, and biologists did their very best to find the Tandayapa Andes toad, but failed. Hope may spring eternal, but after more than 40 years of detailed, intensive surveys, representing hundreds of expert human hours of searching, biologists reluctantly concluded that the toad was Extinct. Now the hope spurred by the rediscovery is driving efforts to ensure that the open-pit mining project doesn’t move forward.

“We’re all very passionate and very desperate,” Kohn says, explaining that fighting the company is difficult, given their funding and government backing. “This is a David versus Goliath fight.”

Fundacion EcoMinga and Kohn are approaching several government offices to raise awareness about the species that will go extinct if the mining concessions go forward. They have complained about the illegal incursions that the mining company have carried out in the field and hope to provide alternatives for communities to support themselves and information for them to make an educated decision about their communities’ future.

The attention-grabbing story of the rediscovery of the lost toad has elevated the amphibian to a flagship species for all animals in the area, including those that are imperiled and little-studied.

“The Tandayapa Andes Toad is a harbinger of hope for us, not just in the extinction crisis, but as we try to combat plans to destroy this beautiful and vital protected area,” Kohn says. “The toad’s already-incredible story has become that much more important in the protection of its home and the animals with which it shares its home.”

The Tandayapa Andes Toad joins a wonderful list of lost species that have been rediscovered. Check out our Search for Lost Species program to learn the stories of other whimsical wildlife species that are still missing.