Timely Decision Making is Essential to Save Wild Rhinos in Indonesia; A Solution is in Sight

Of the five species of rhinoceros in the world, two are restricted to Indonesia and both are Critically Endangered. Both the Javan and Sumatran Rhino are on a knife’s edge, where just a slight increase in pressure could lead to their rapid extinction. With so few animals of each species remaining, it is critical that each individual is monitored for both safety, and breeding success, so that we can implement timely interventions on the individual level.

There are 68 Javan Rhinos left in the world; all of them in Ujung Kulon National Park. Such a small population is intrinsically extremely vulnerable to extinction. An outbreak of disease, a tsunami, an eruption of the nearby Anak Krakatau volcano, or a concentrated poaching epidemic could wipe out this species forever.

There are fewer than 80 Sumatran rhinos scattered across Sumatra and Kalimantan. A new initiative to consolidate all small populations and isolated individuals into a national breeding program would leave just two populations in the wild; in Gunung Leuser and Way Kambas National Parks. These two small populations remain highly vulnerable to poaching.

For both species, the number of breeding females is perilously small. This means it is imperative that every female reaches her reproductive potential and produces as many calves as possible. In the case of the Sumatran Rhino, their populations are both small and at low density, which can lead to low reproductive rates since animals can’t find each other or can only find closely related or non-compatible mates. In the case of the Javan Rhino, the small population is at high density and close to carrying capacity, resulting in reduced breeding rates due to environmental and social stresses, as well as restricted mate choice with only closely related or possibly non-compatible mates available.

Solutions exist to addressing these constraints on reproductive rates. Isolated female Sumatran Rhinos could be brought into the conservation breeding program or translocated to an area with a known breeding male. For Javan Rhinos, the plan is to establish a second population to reduce the density of animals and reduce the risk of having all animals in one population. Therefore, animals being prevented from breeding in Ujung Kulon could be used to start this second population. Animals could also be moved to the Javan Rhino Study and Conservation Area, a semi-fenced area in Ujung Kulon designed to facilitate breeding and act as a half-way house for a second population.

The theory behind such intensive population management of these rhinos is sound and presents a solution to speed up the recovery of both species. However, due to the dense forest habitat and topographic constraints of working in the three parks, the data to make such decisions is not available because the animals are rarely seen. The best data-gathering tool has been proven to be camera traps, which have helped increase our understanding of the population demographics of the Javan Rhino through the deployment of a grid of 120 camera-traps since 2013. In the two Sumatran Rhino sites, no systematic camera-trapping survey has been conducted to accurately assess population size and demographics.

Data from camera traps is currently gathered every few months and analyzed annually in Ujung Kulon National Park. While helpful, this does not provide the level of monitoring that is required for such a vulnerable species. Similarly, current patrolling efforts reactively respond to incursions after they occur, whereas real-time action and response is urgently needed across the protected areas. Carcasses, even of large mammals like a rhino, are hard to find in the dense forest of Indonesia, and so identifying missing rhinos from the population can only be guaranteed from extensive datasets of camera-trap data. If a disease outbreak occurs, or a poaching gang infiltrates a park, it is important to identify missing rhinos quickly to mobilize a timely response to mitigate the threat before it continues to remove additional rhinos from the population. This can only be achieved if data on each individual rhino is being received on a real-time basis.

The partners working to conserve and manage these three populations have therefore designed a real-time, paired monitoring and protection system that, for the first time, will provide accurate population demographics. This will enable the informed decisions required to manage and protect the populations, thus increasing the breeding rate of both species—an essential step in the recovery of the two species. We are currently testing parts of this system and fundraising for the implementation of the model across all three parks.

Camera traps will be placed every one square kilometer across the distribution of wild rhinos in Indonesia. On-camera processing will identify rhino images and transmit them automatically to the cloud via SMS, long range point to multi-point Wi-Fi, or satellite depending on the connectivity option in each park.

Once an image has been uploaded to the cloud, the rhino will be identified using artificial intelligence. The artificial intelligence will consist of a two-stage pipeline. Firstly, the image will be cropped to either the head or body of the rhino using bounding boxes generated through an object detection model. Secondly, cropped images will be input into a feature extractor consisting of a pre-trained neural network with its output and final hidden layers removed. The extracted features will be input into a shallow network that will classify the rhino’s identity.

The small size of these critically endangered populations means that the ability to gather the data required to train a complex model is severely limited. The artificial intelligence system has been designed to leverage a neural network that has been pre-trained on millions of images to overcome this issue.

The automated artificial intelligence system will provide real-time identification of rhinos, replacing a time-consuming manual identification process that could only be performed by those experienced with the rhino populations they are identifying.

Through a secure web-portal designed specifically for managing and monitoring camera trap deployments and imagery, the photos will be examined and tagged to allow queries, geospatial data layer creation, and data export for population demographic analysis by the ministry, parks, and conversation stakeholders. The secure web-portal will also push the data to SMART Connect databases via application program interfaces where the data will be available in the parks for local operational planning and deployments. 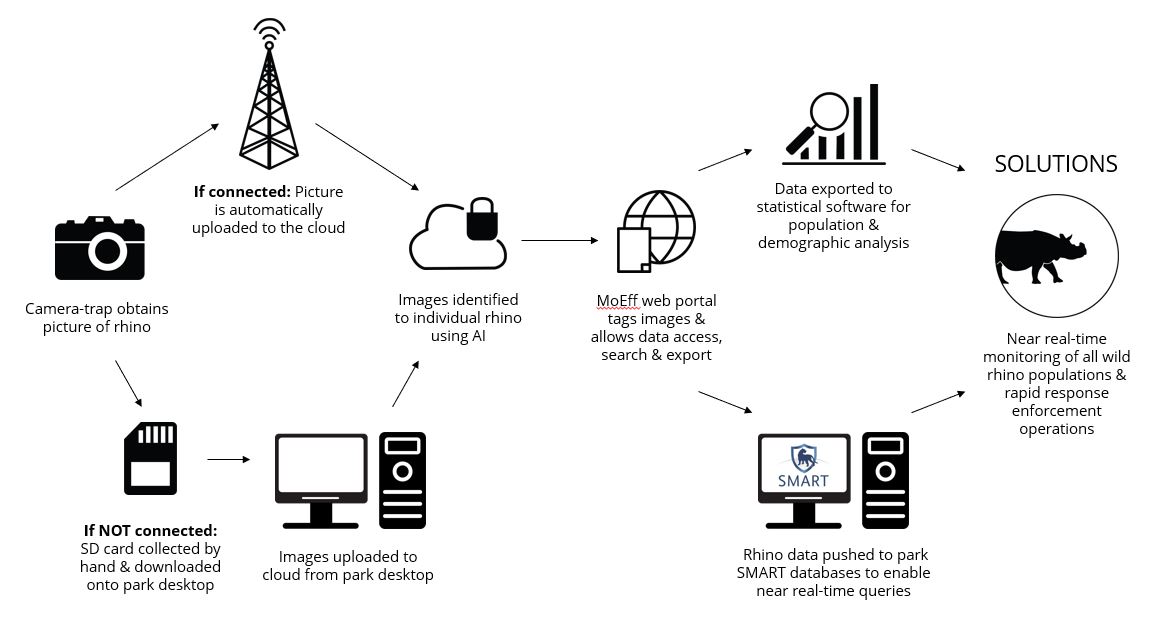 Data on infractions will be gathered through camera traps with human detection algorithms on-board, patrol interdictions, and informant networks. Data will be sent to park operations rooms via SMS, long range point to multi-point Wi-Fi, or satellite, depending on the connectivity option in each park. Here all data will be centrally managed and analyzed using the SMART database and ranger deployments made. Only through real-time data transfer can the parks have the ability to identify incursions and mount suitable responses in sufficient time to prevent incursions turning into poaching incidents.