The wild musicians of Colombia’s Sierra Nevada de Santa Marta put on a concert every night with the setting of the sun—the low grunt-like hoots of the owl monkey’s war whoop, the cicada-like call of Walker’s Sierra Frog and the cacophonous chirps of real cicadas harmonizing in a symphony of life unique to this place. So when Colombian biologist José Luis Pérez-González heard the call of an unusual amphibious vocalist in the creek beside his campsite, he suspected that he and his team had inadvertently stumbled across a frog species new to science.

“We had gone out on an expedition to survey a population of harlequin toads and on the way back decided to sleep by a creek because we were too far from the city to make it by nightfall,” says Pérez-González, the vice president of GWC’s partner Colombian NGO Fundación Atelopus. “We got bored and went to explore the creek where we found a glass frog—but the frogs’ calls were markedly different from the call of the species we already knew, the endemic Magdalena Giant Glass Frog. It was a beautiful experience to find an entirely new species just because we were being lazy. It was a real stroke of luck.” 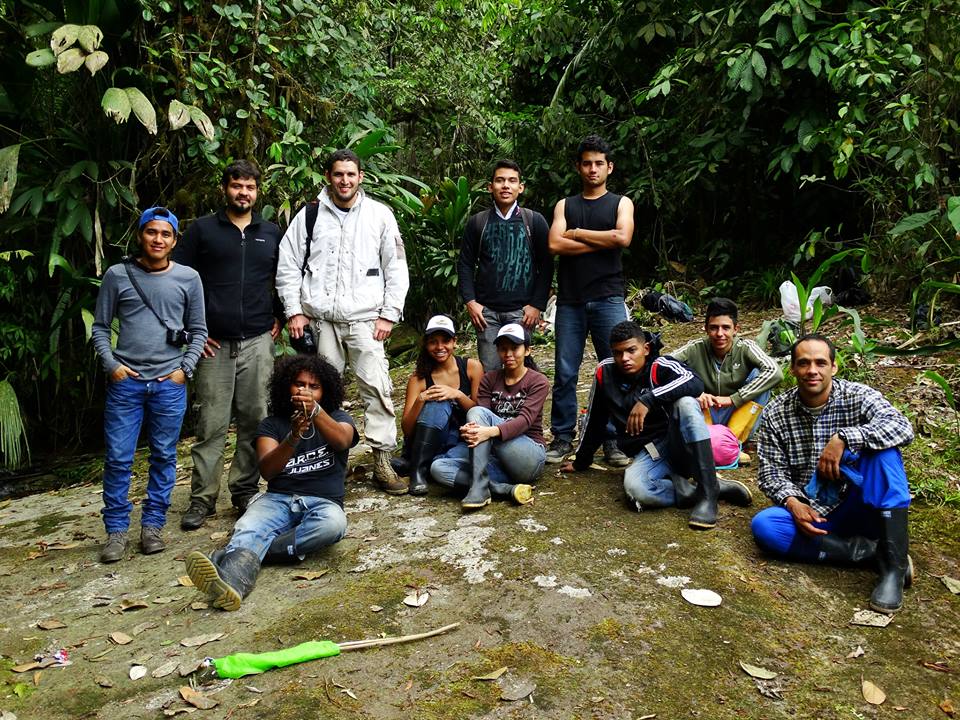 The original expedition team that discovered the Guajira Giant Glass Frog, which was just described in a paper in PLOS ONE this week. (Photo by Fundación Atelopus)

Although that trip was in 2015, Pérez-González and team weren’t able to publish their discovery of the new species, the Guajira Giant Glass Frog (Ikakogi ispacue), until this week in scientific journal PLOS ONE. The frogs’ call was certainly distinct, but physically it appeared to be the same as the Magdalena Giant Glass Frog (Ikakogi tayrona), previously the only known species in this group of Ikakogi glass frogs, so they needed more information to be sure.

It was only by going on a number of additional expeditions through torrential downpours and thick jungle underbrush back to the site that the team could determine that this was truly a new species, finding differences in tadpole morphology, confirming the differences in the frogs’ vocalizations, and finally and conclusively through DNA analysis. The discovery team included researchers from the University of São Paulo in Brazil and the Colombian universities of the University of Magdalena, University of Quindío, University of the Andes and the National University of Colombia.

“Having the fortune to discover a healthy population of a new frog species gives us hope in the context of extinction, reminding us that there are opportunities to maintain and protect our wonderful biodiversity, and that we need to act soon to secure a future for all of the wildlife around us,” says Lina M. Valencia, GWC’s Colombia Conservation Officer. “This is especially true in the Sierra Nevada de Santa Marta, which is an untouched and understudied place, a magical place of wonder and natural discovery. It holds the incredible promise of abundant opportunities for discovery and protection.”

A Tale of Two Glass Frogs

These two Ikakogi glass frog species are part of the broader Centrolenidae family of glass frogs. Glass frogs are known for having partially or fully transparent underbelly skin, revealing their innards. Their tadpoles live in muck and leaf litter on the bottom of streams and often appear blood red because their blood flows close to the surface of their skin to help them survive the oxygen-poor environment. They also have green bones and the males take care of offspring—though the Magdalena Giant Glass Frog and Guajira Giant Glass Frog appear to be the only glass frog species that have white bones and are among the few glass frog species where the females take care of the offspring (and do so for a notably long time). Biologists aren’t yet sure why Ikakogi frogs evolved these differences. 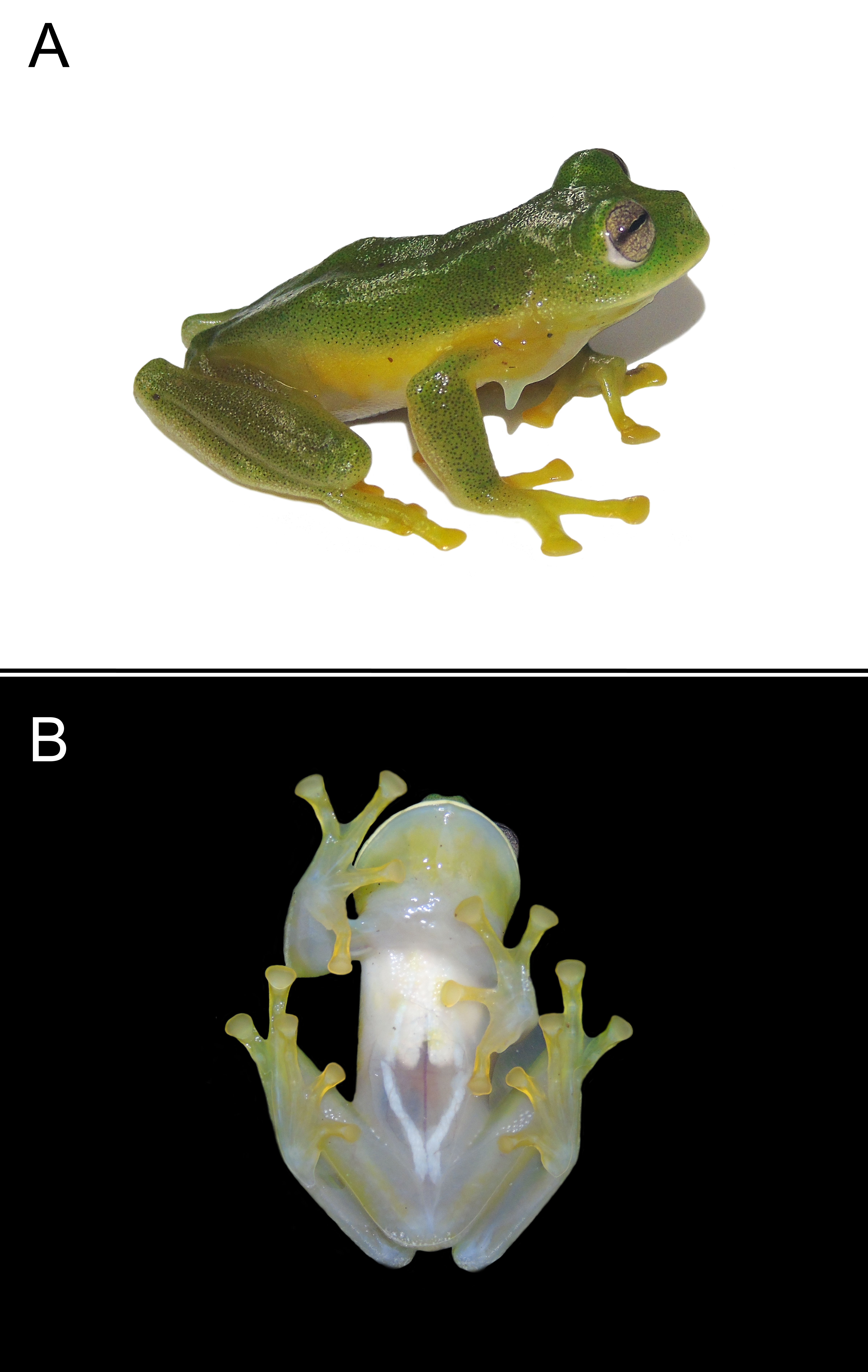 Including the indigenous community in the naming of this species—and its conservation—is imperative to the animal’s future, Valencia says.

“For many generations, indigenous communities have lived in and protected these beautiful yet fragile ecosystems,” Valencia says. “They are the guardians and the stewards of these territories, this is their home, and what ultimately threatens biodiversity also threatens them. Their traditional knowledge, practices and culture is intrinsically linked with nature. It is therefore critical that we work with indigenous people to successfully achieve conservation objectives.”

In addition, the four indigenous communities that live in the Sierra Nevada de Santa Marta—Arhuaco, Kogui, Wiwa and Kankuamos—have a deeply rooted relationship with nature, including a tremendous respect for the role that frogs play in the ecosystems that sustain all life on Earth. For these indigenous groups, frogs are a symbol of fertility and ecosystem health. 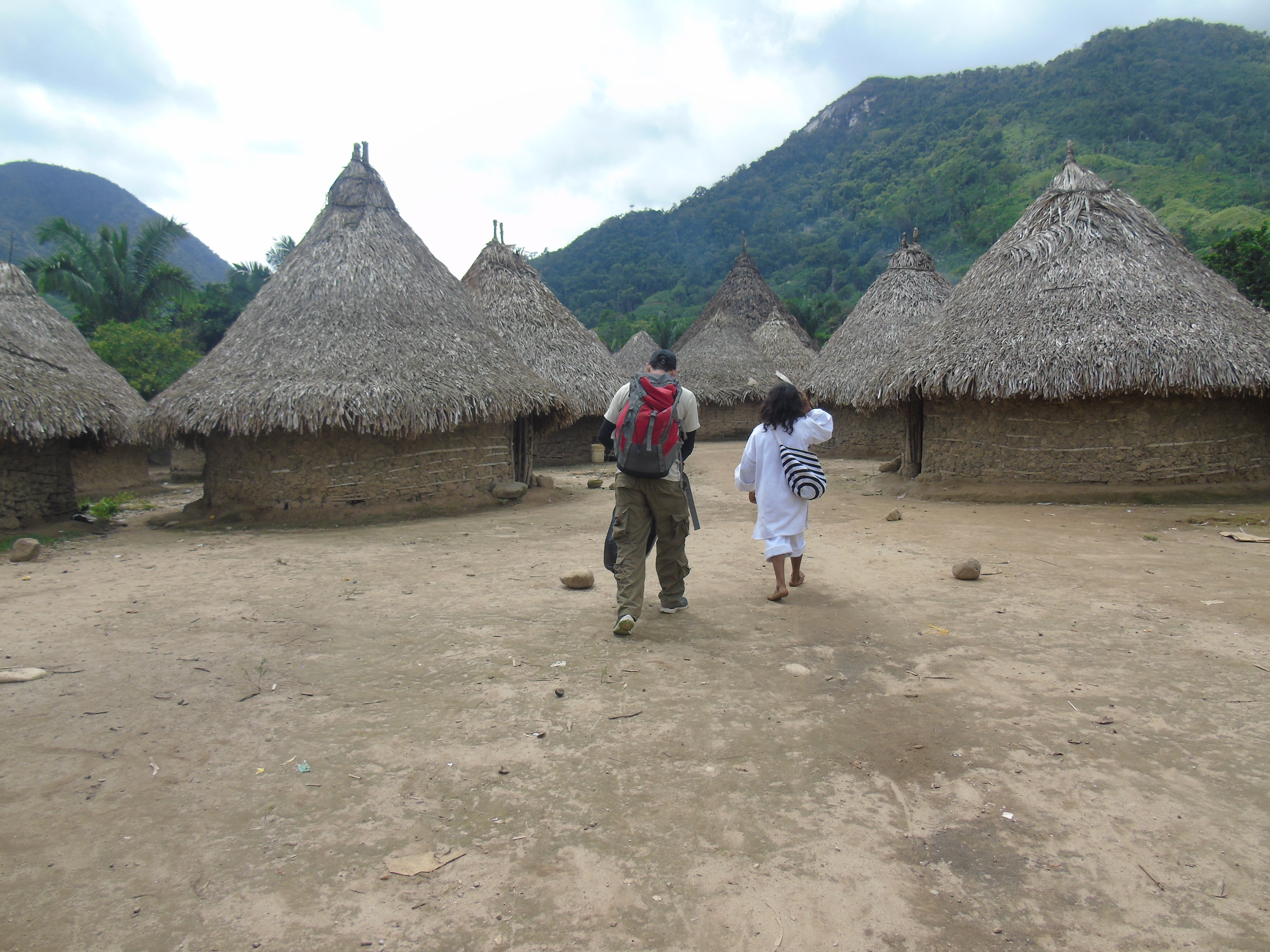 For indigenous groups in Colombia, frogs are a symbol of fertility and ecosystem health. (Photo by Fundación Atelopus).

“Nature is a living organism that produces life. It has its own history and we as humans were made to live alongside it. To do that, we need to understand nature and its stories,” says Lorenzo Gill an indigenous member of the Wiwa community. “What do we have to do to keep protecting species in La Sierra and newly discovered species like this frog? The most important thing we can do is to identify them and, with our indigenous leaders, create a story around them that helps us understand the role they play in our lives and how we can live alongside these new frogs.”

There are 78 species of glass frog species that live in Colombia—more than half of the total number of glass frogs in the world. Sierra Nevada de Santa Marta, which is the tallest coastal mountain on Earth and one of the planet’s most biodiverse and irreplaceable places (and a Key Biodiversity Area), is a notable haven for amphibians generally, with 17 amphibian species that live here and nowhere else in the world.

This includes five harlequin toad species, one of GWC’s priority groups of species. When Pérez-González and team set out on their trip, they were looking for a reportedly new population of harlequin toads. Sierra Nevada de Santa Marta is home of one of the last-remaining populations of harlequin toads in high-altitude ecosystems. 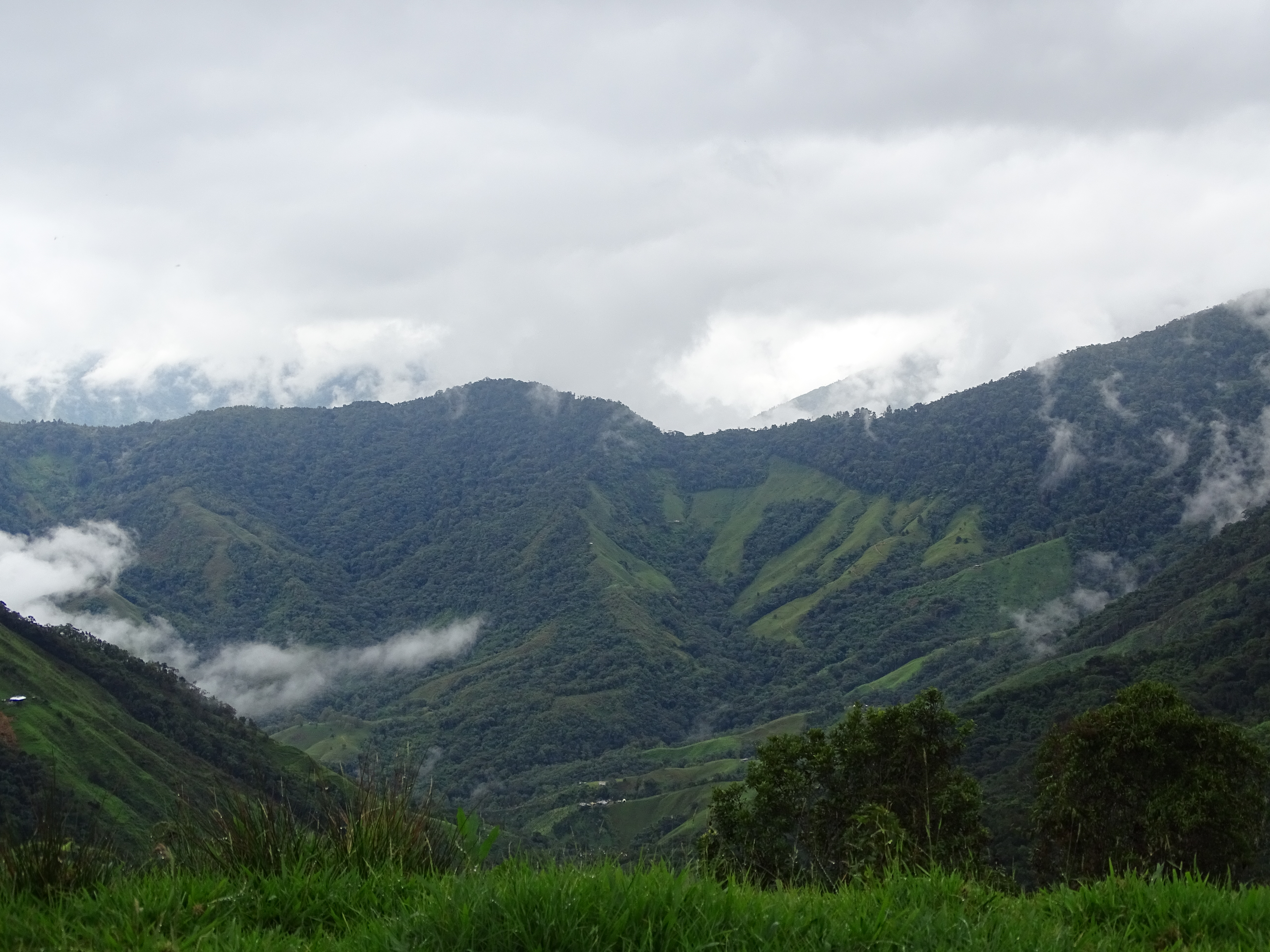 Colombia’s Sierra Nevada de Santa Marta has been identified as one of the world’s most irreplaceable places . Seventeen amphibian species live here and nowhere else in the world. (Photo by: Fundación Atelopus)

Unfortunately, even as species are discovered and rediscovered in this area, they’re also coming under threat. The peace treaty signed in 2018 with the left-wing FARC guerilla group ended the civil war, giving conservationists the opportunity to get a stronger handle on the country’s biodiversity—but also increasing the risk for rapid forest loss through development. In addition, the deadly infectious disease chytridiomycosis,  caused by an amphibian chytrid fungus, has wiped out hundreds of frog species worldwide and continues to pose a threat to Colombia’s amphibians.

“The discovery of this new glass frog is a call to action,” says Pérez-González. “We all know that this is a place of high endemism, but the truth is that few conservation actions are in place. We need management plans at the regional and national levels that allow us to invest resources and take actions to conserve the Sierra Nevada de Santa Marta.” 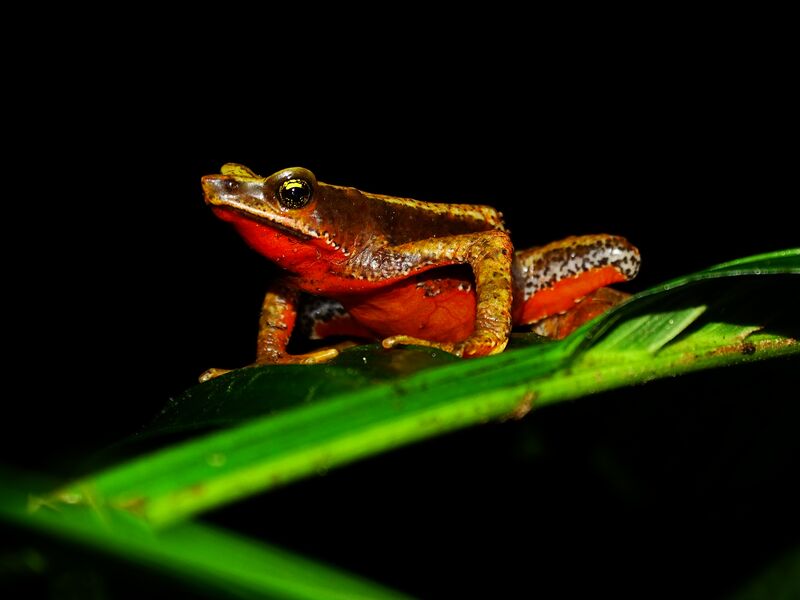 The San Lorenzo Harlequin Toad is found only in the Sierra Nevada de Santa Marta, in addition to 4 other known harlequin frogs found in this region, one of the world's most irreplaceable places (Photo by: Fundación Atelopus)

Pérez-González reports that the population of the newly described species seems to be stable, but conservation actions will depend, in large part, on an IUCN Red List assessment of how close the Guajira Giant Glass Frog may be to extinction given the threats in the area.

“The first step toward the conservation of this newly recognized glass frog will be to assess its extinction risk, on both the National and Global Red Lists, by considering aspects of its range, population status, and threats,” says Kelsey Neam, GWC’s Program Officer of IUCN Red List Assessments. “Only then can an effective conservation plan be designed and implemented to ensure that this population of unique frogs remains healthy in the Sierra Nevada de Santa Marta for millennia to come.” 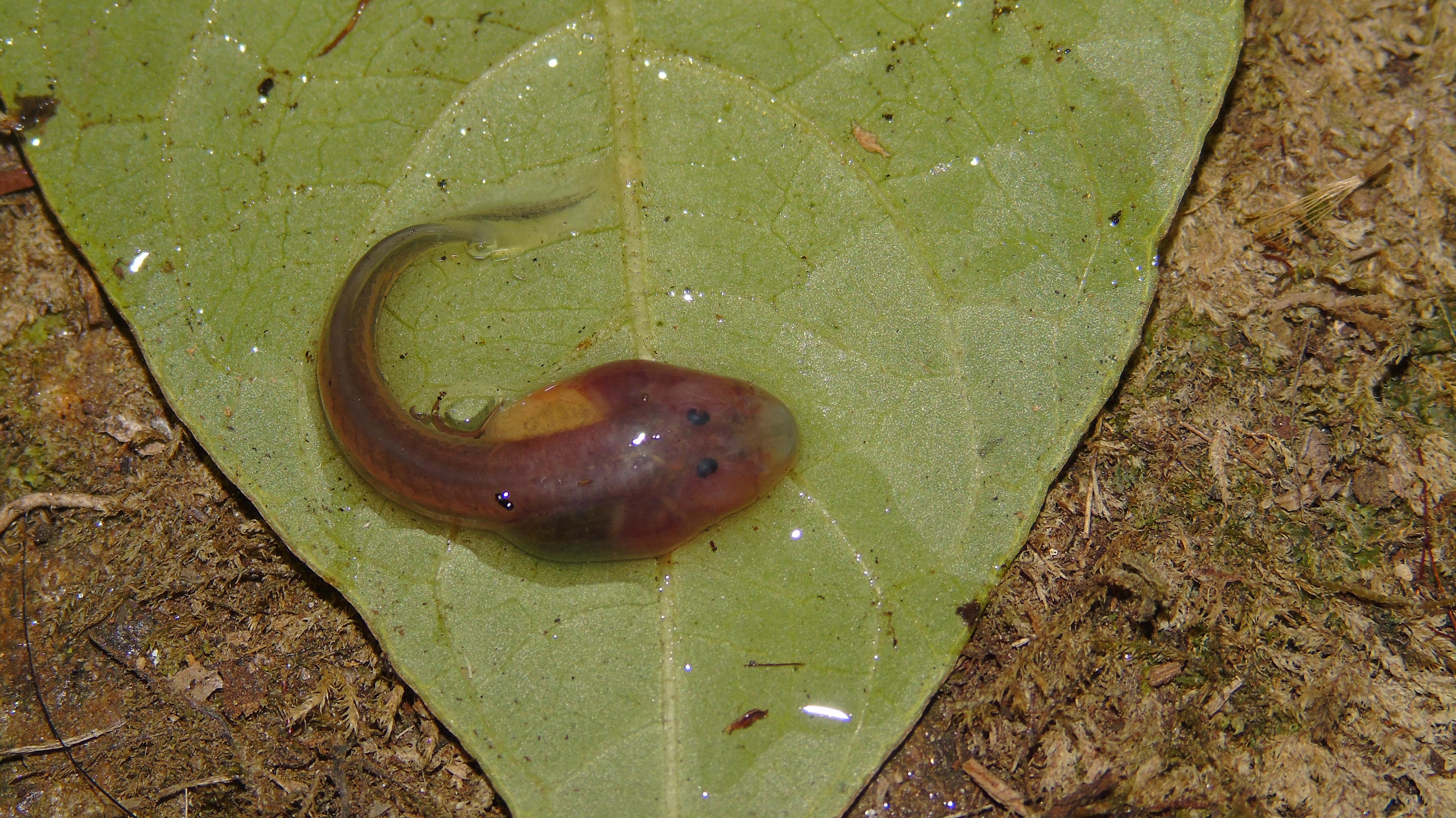 Glass frog tadpoles often appear blood red because their blood flows close to the surface of their skin to help them survive oxygen-poor environments. (Photo by: Fundación Atelopus).

The plan to conserve this species will also depend on what the researchers are able to learn about the species in terms of its diet, ecology and habitat needs, reproductive physiology and parental care.

“Finding this species is not where the work ends,” Valencia says. “Although the species was found in a pristine area, Sierra Nevada de Santa Marta is a fragile place facing many threats in the wake of climate change. We need to start working alongside local communities to protect this beautiful forest, its incredible biodiversity and the local livelihoods it supports.”