The story behind being a frontline firefighter

Forest and land fires occur in Central Kalimantan, Borneo every year, but 2019 was one of the worst years on record. Based on data from SiPongi (Karhutla Monitoring System), more than 317,749 hectares burned. One of the areas that was at risk from the fires was the Sebangau Forest LAHG - Laboratorium Alam Hutan Gambut, or the Natural Laboratory of Peat-swamp Forest, managed by the Centre for International Co-operation in Sustainable Management of Tropical Peatland (CIMTROP) at the University of Palangka Raya. A fire in the Sebangau Forest would destroy the entire ecosystem, which is home to Critically Endangered species like the Bornean Orangutan.

Peatlands are naturally water-logged and resistant to fires, but the forest has been drained as a result of logging and agriculture. Loggers dug canals to float timber out of the forest, and though the logging projects have long finished, the canals remain diverting water away from the peatlands. Other canals have been dug to control water for farms and plantations. The irrigation changes have been exacerbated by climate change, which has made the dry season longer and more severe.

"In the Sebangau LAHG, there are many causes to the fires," says CIMTROP Community Patrol Team coordinator, Krisyoyo. "One of the factors is the fires are started by people from the local area, who are hunting or fishing."

According to Krisyoyo, in the Sebangau area there are still people who hunt wild boar and several species of birds that are not protected. In addition, many fishermen spend nights in the forest looking for fish, setting fires to clear the river edge or cook their catch. The fires can quickly burn out of control if they are left unattended.

"Other factors also influence the frequency and severity of forest fires, such as El Nino," he explains. "Strong winds and long droughts make peat very dry and flammable even with only a few embers."

The Community Patrol Team was formed by CIMTROP in 2003, to monitor and prevent illegal logging, poaching and forest fires in Sebangau. With limited resources, the team has been dedicated to protecting the forest ever since.

"Firefighting equipment is available, but is sometimes quite modest, like water pump machines," explains Krisyoyo. 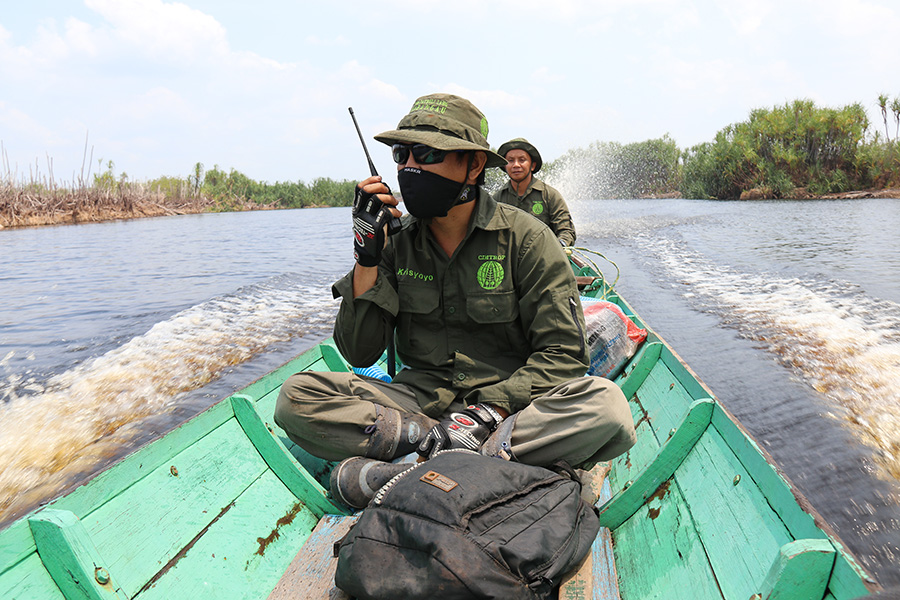 He says that, the existing water pump engines are too small for larger fires, especially if the flames are far from the bore where the Community Patrol Team can access water.

"Smaller water pumps are not able to suck up water that is far away," he says. "We often struggle because the weak suction makes the water flow very slow. We need a large engine that can help the firefighters extinguish the blazes quicker and more efficiently."

In addition to the engine, many of the team's hoses and safety clothing are damaged and are no longer safe to use. Many tools have been broken during fights to control the blazes, but despite that the teams have continued to use them for many years.

Krisyoyo realizes that the Patrol Team assisted by the Community Firefighting Teams (known locally as MPA – Masyarakat Peduli Api or Community Concerned about Fire) and other community members has a very important role in tackling fires that threaten the forest every year.

"We ourselves are not able to extinguish fires which are a widespread, so we are grateful to Borneo Nature Foundation who formed the MPA to assist us in dealing with forest fires," he says. "In addition, there are also many people who voluntarily help to put out the fires." 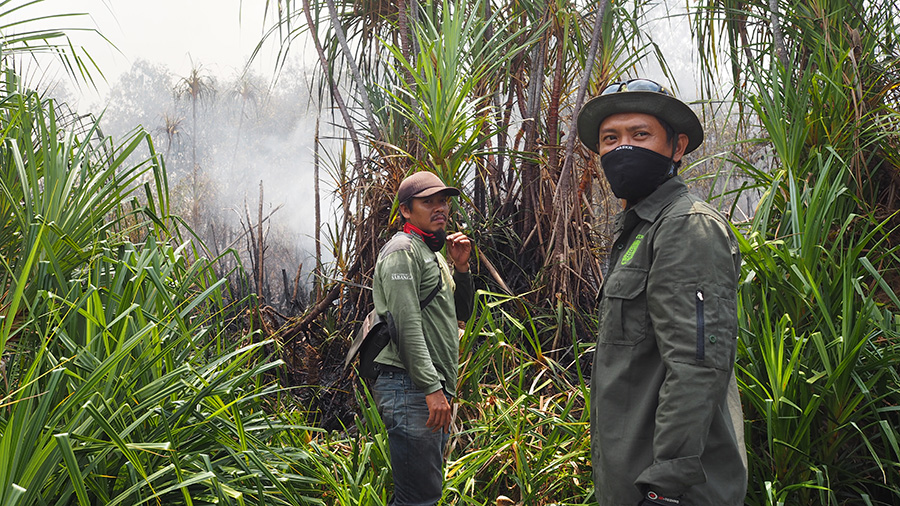 However, there are still many people who don't yet know how to properly extinguish the fires, particularly fires on peatlands which requires a specific process. Several times the Community Patrol Team has had to teach volunteers how to fight peat fires while simultaneously putting out burning areas.

"Although we are happy that many people are willing to help, many of them also do not yet know how to install the equipment correctly," explains Krisyoyo. "Apart from that they only know how to put out fires on the surface. We really want to have training for the community to be able to help us in a more effective way," he added while drinking black coffee from his glass.

Krisyoyo said, the work he and his team does is a responsibility and a heavy burden; risking their lives on the frontline and working very long hours in cases when there are large fires.

"This is a big job, besides staking my own life, I am also responsible for the safety and lives of all team members," says Krisyoyo. "We often make satellite camps and sleep in the forest when there is a fire."

If a fire has started, Krisyoyo and the team will spend more time in the forest than at home with their families. 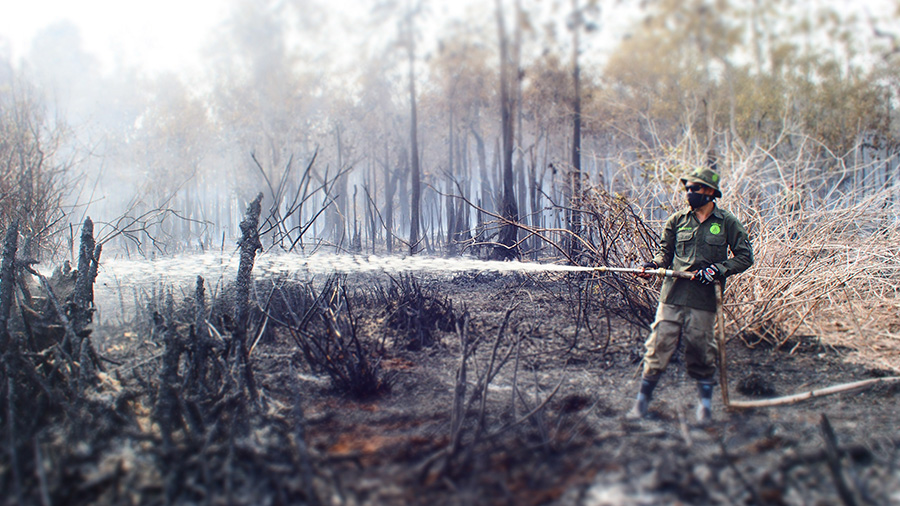 "In 2009, a large fire in the Kalampangan area, next to Sebangau Forest, burnt down the firefighters camp," he recalls. "My foot fell into a hole that was still burning and my right foot burned, some of my hands were also burned, even though I was wearing protective clothing. Imagine if the people do not want to wear boots for their safety," he said shedding tears while remembering the incident.

Krisyoyo is very grateful to BNF for helping in a real and consistent manner in supporting the Community Patrol Team operations. Without BNF, the Patrol Team would find it very difficult to maintain the security of the Sebangau LAHG area.

"We hope that BNF and their partners are still there to help us," says Krisyoyo. "The firefighters are always ready, but if there are no funds for operational costs and suitable equipment then we cannot carry out our duties."

Following a 9-year career as a journalist in Indonesia, Yohanes now works at Borneo Nature Foundation and is its Content Creator and Media Liaison Officer.