The Fight to Keep the Kruščica River Wild

In Bosnia and Herzegovina, the Kruščica River flows through mountains, bringing fresh drinking water to the villages that dot its banks and offers critical habitat for many species. Its current connects local people to each other and to a wilderness that is disappearing on the European continent.

The Kruščica River is as much a part of villagers’ lives as their families and friends--and they defend it from danger as fiercely as they would their own children.

“It makes me angry when I see rubbish floating down the river, now more than before,” says Tahira Mika Tibold, activist and chairwoman of the local community council of Kruščica. “Back in the day the river babbled, but now it no longer babbles in front of my house because people interfere with the river and redirect its flow.”

During the past three years, the river has been threatened by small hydropower projects, but a group of dedicated local activists led a year-and-a-half-long grassroots protest to protect the Kruščica River and keep it wild.

In 2017, word started spreading around Kruščica that construction on small hydropower projects on the river was about to begin.

The local community had not been consulted about the dam and were unaware that the land-use plan for Kruščica had changed to include two small hydropower projects. 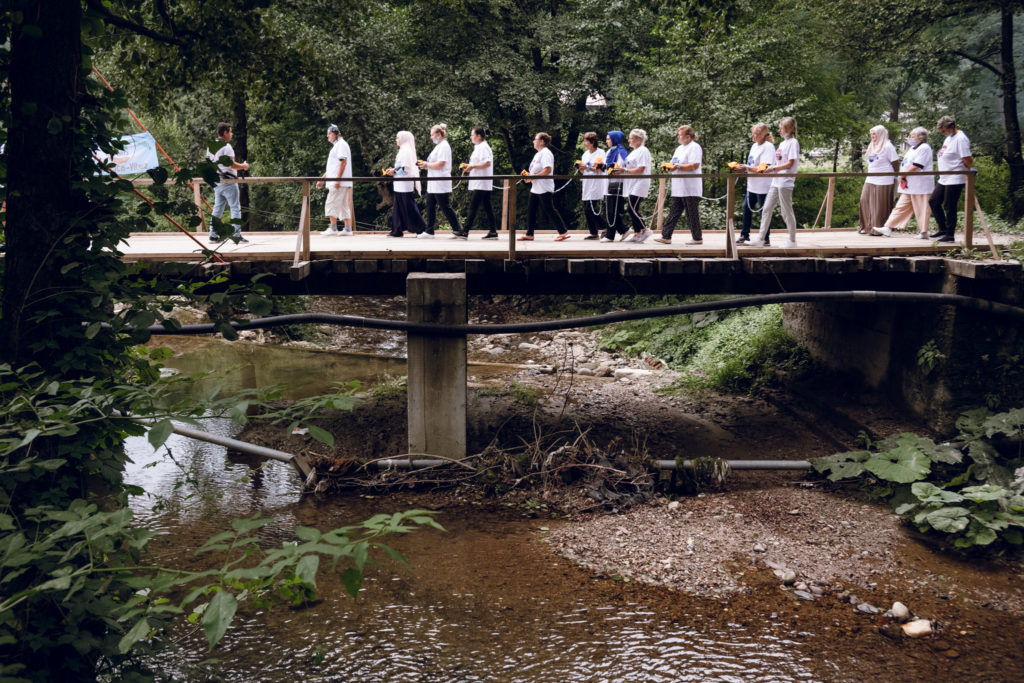 The Brave Women of Kruščica returned to the bridge they occupied for more than 500 days Aug. 24, 2020 to commemorate the protest to save the river. (Photo courtesy of Jakub Hrab/Arnika)

Where the Wild Rivers Are

The Balkans contain the last free-flowing rivers in Europe. Nearly every river in western Europe has been dammed and no longer flows unobstructed from its source to its end. Now a boom of small hydropower projects is threatening to strangle the peninsula’s rivers. Approximately 3,000 small dams are planned or in the process of being built.

Scientists and local activists argue the dams are not worth the environmental cost. Environmental impact surveys are often not completed with enough scientific rigor before construction begins, despite the projects completely change the ecology of rivers. And only around 3% of the energy that existing small hydropower projects produce is used in Bosnia and Herzegovina, the rest is exported to western Europe.

The hydropower projects are primarily built by foreign and local investors with little to no input from local communities and subsidized by local governments. The projects are also costly.

The village of Kruščica was blindsided by the hydropower projects. Kruščica has been identified as a protected area in land-use plans going as far back at the Austro-Hungarian Empire. The Municipal Council of Vitez had changed the land-use plan for Kruščica in 2016 without properly notifying villagers or giving them the opportunity to comment.

A local teacher circulated a petition to stop construction, but the local council wasn’t swayed, and construction moved ahead. During the summer of 2017, the bulldozers and construction equipment arrived and were about to cross a bridge to start irrevocably reshaping the Kruščica River.

On Aug. 2, 2017, villagers blocked the bridge that the energy company needed to access to begin building the dams. The bulldozers and trucks were forced to turn back, but the protestors couldn’t claim victory yet. A few weeks later, the energy company came back with a special police escort. 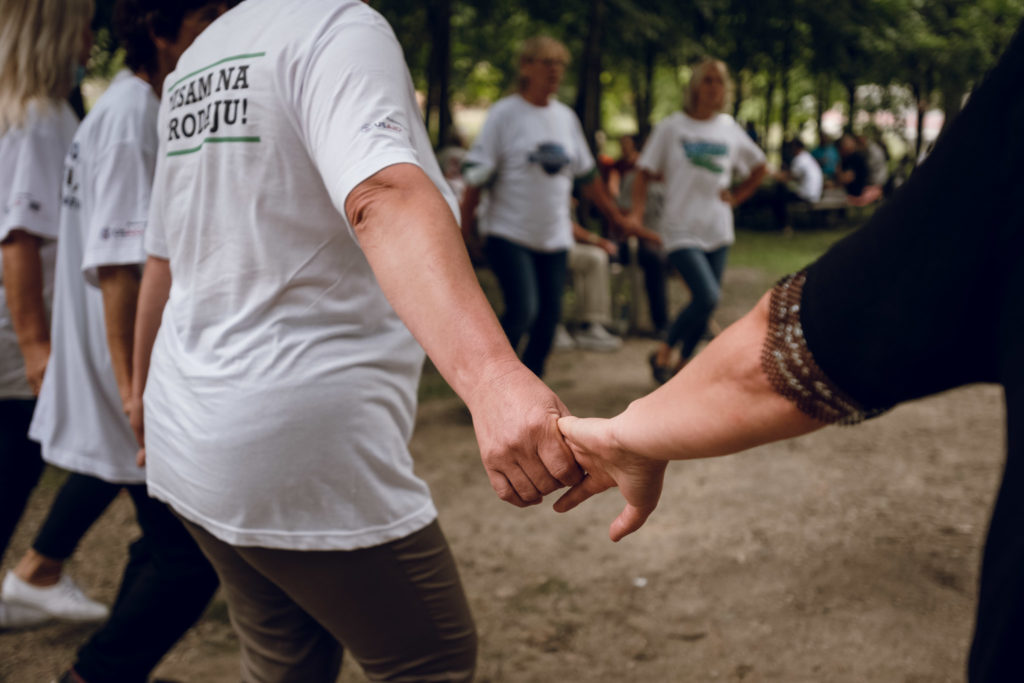 The Brave Women of Kruscica join hands at an event on the third anniversary of the morning they were attacked for refusing to let construction equipment cross the bridge over the Kruščica River. (Photo courtesy of Jakub Hrab/Arnika)

Brave Women on the Bridge

During the early morning of Aug. 24, 2017 protestors headed to the bridge after learning the energy company was going to access the bridge again.

“We agreed that women would stand on the bridge, blocking the way to prevent the machines from passing through, while the men would be on the side,” explains Enes Salkić, an activist and a core member of the resistance against the Kruščica hydropower projects. “We thought they [the police] would not harm the women, and the women would be able to stay calm.”

Fifty women formed a human blockade across the bridge, holding hands. The special police ordered the protestors to leave, saying they had five minutes to move, but the women refused. Then, the police attacked the peaceful protestors.

“I did not believe the police would go against us,” says Maida Bilal, president of the non-profit ecology association Eko Bistro and one of the activists on the bridge that morning. “I was wrong, the police attacked us, they twisted my arms, they hit me in the chin.”

The police arrested 22 women and one man. The screams from the protestors as police beat them could be heard around the village. But instead of intimidating the protestors, the incident only hardened the activists’ resolve. The story of their bravery became international news and they are known as the Brave Women of Kruščica.

Despite being beaten and arrested, the next day the women returned to the bridge embarking on a lengthy resistance. For more than 500 consecutive days, they occupied the bridge 24 hours-a-day, seven days a week. They organized shifts, erected a small tent with a stove to keep them warm during night shifts, and supported each other during the next year-and-a-half.

“That team became a family of 200 to 300 people, there were many conversations that took place there, lively discussions,” says Bilal. “And when things became hard, there was no talk of abandoning the fight.”

The protestors largely had the support of the village as well.

“The whole village became the eyes and ears of our resistance,” says Salkić. “As soon as someone found out something, they would call immediately.”

From Protests to Court Cases

The grassroots effort didn’t stop at the bridge. The activists also took on local politicians who had been complicit in allowing the dams to go forward without involving the community.

Kruščica’s local council suffered a vote of no confidence in August 2017 and Tibold was elected as the new chair.

In the three years since, the local community in Kruščica have been fighting a legal battle against the hydropower investor with the help of Eko Bistro Association, a non-profit they founded. They sued to permanently stop the small hydropower projects and restore Kruščica’s status as a protected area. After losing in a lower court, an appeals court cancelled the zoning, environmental and construction permits for two small hydropower projects. But the court ruled in favor of the investors when the activists sued to cancel the concessions for the hydropower projects. The activists appealed to Supreme Court of Federation of Bosnia and Herzegovina and are awaiting the ruling.

“This legal battle we’re fighting, that we believe we will win, should serve as an example for the whole society to get involved in the fight against corruption, the fight for justice and fairness,” says Bilal. “We’re talking about the public goods being stolen from the people by corrupt politicians. We know the best what our region needs, but they have done everything to exclude us from the decision-making process. The same people who passed those laws, rules and regulations violated them.” 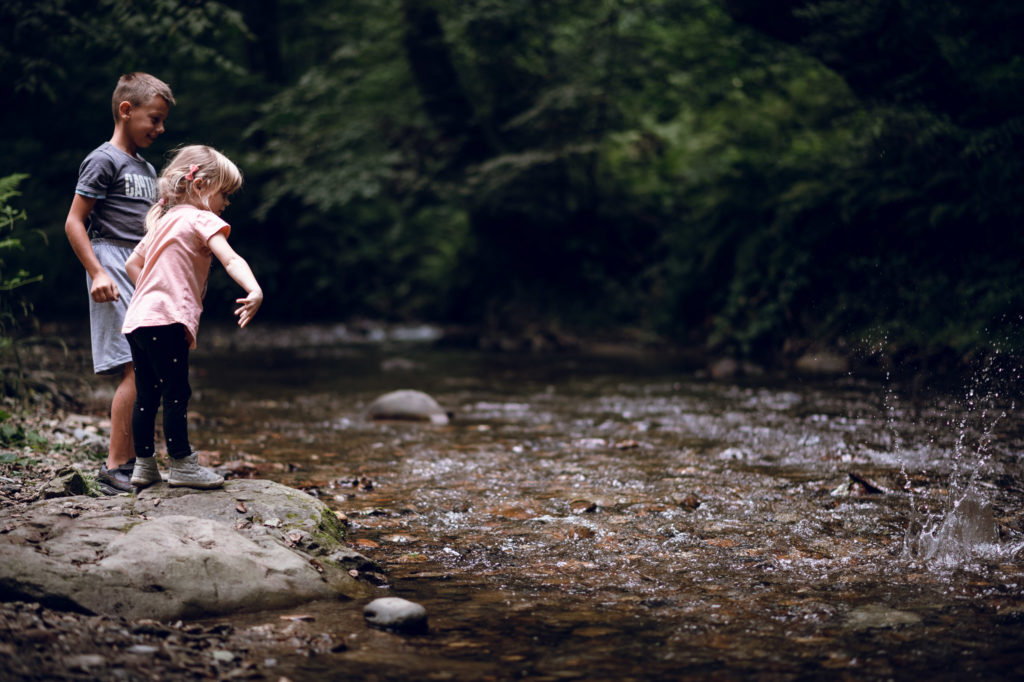 Two children playing on the bank of the Kruščica River on Aug. 24, 2020. (Photo courtesy of Jakub Hrab/Arnika)

On the third anniversary of the attack on the Brave Women of Kruščica, activists started a civic initiative, circulating a petition that calls for the local Municipality Council of Vitez to remove small hydropower dams from the land-use plan for Kruščica. They need 5% of citizens to sign--about 1,300 people. Halfway through, they already have 1,000 signatures.

“We want everyone to know that we know that no one can do well unless everyone is doing well,” says Bilal. “We have to have a good life in Vitez, Foča, Konjic, all the way to Višegrad. Our rivers unite us. Rivers connect us. The struggle for rivers erases these imposed divisions in Bosnia and Herzegovina. The fight for rivers is a fight for Bosnia and Herzegovina. We have come to this point where we have to fight to preserve our natural resources.”