An old man paces the lowland forests of Nicaragua’s Indio Maíz Biological Reserve. He’s a great swimmer, loves eating palm leaves and fruit, weighs in at around 500 pounds and can be a bit of a tease. His name is Almuk, a Baird’s Tapir who for the last year has deftly eluded a team of biologists trying to track him down to collect data from his GPS collar.

On March 5, the old man finally gave GWC Associate Conservation Scientist Armando Dans and GWC Nicaragua Programs Director Dr. Chris Jordan the chance to uncover the secrets of his movements. Dans and team briefly trapped Almuk along a trail they suspected he was using and recovered his collar before sending him off back to forage in his forest home. Almuk is one of three Baird’s Tapirs whose collars, installed in 2016, failed to automatically fall off in 2017 as programmed to do. Even with radio telemetry to point the team in the direction of the tapirs, actually catching the animals—who are experts at staying quiet in the forest despite their size and flee at any unusual noises—has proven challenging. But Dans and team were persistent, trying different capture methods and identifying the tapirs’ most likely paths with help from the local indigenous Rama and afro-descendant Kriol people.

“One of the best parts of being in the field is working with the local people, who know these forests so well and play such an important role in saving this species and monitoring for illegal activities,” Dans says. “My other favorite part is when we get a tapir, especially when its collar stores so much important information—and you’ve spent the last year looking for the animal.”

After four weeks of daily rides in a boat up Indian River, stopping to check traps, camping, then heading back downriver the 13 miles and repeating the checks the next day, the team this month recaptured both Almuk and a second previously collared tapir, Wes, with a pitfall trap. Tapirs safely tumble into pitfall traps—hidden holes dug into the ground with natural ground covering—where they await the biologists for a brief time. In this way the team also captured and collared one new adult male and one new adult female, bringing the number of successfully collared tapirs in the program to seven. The collars record the tapir’s locations every hour, every day, and are unlocking a wealth of data about the behavior and movements of Baird’s Tapirs in Indio Maíz—information that is critical to the effective conservation of the Endangered species.

The last time GWC Nicaragua Programs Director Dr. Chris Jordan spotted Almuk—whose name means “Old Man” in the Rama language—the two came face to palm-leaf-eating face on a trail in Canta Gallo. It was March of 2017, and Jordan and his team had been trying to track Almuk via radio telemetry, without success. After hours of frustration, he set off alone with a radio receiver to check one last time along a trail frequented by tourists, leaving behind the rest of his equipment and camera, thinking an encounter unlikely. 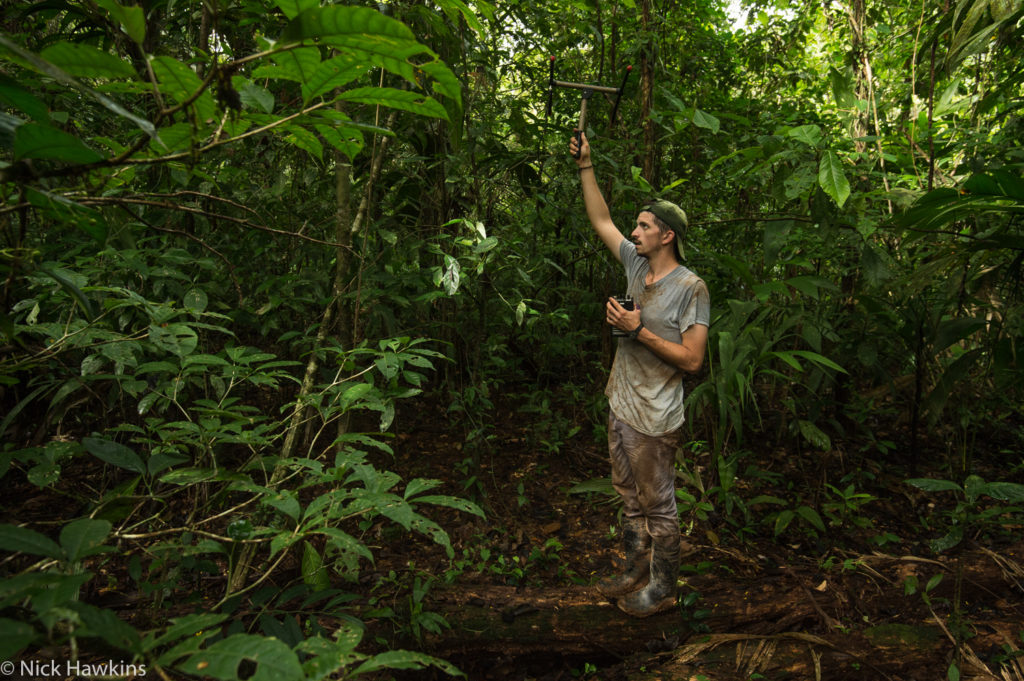 “I walked about 20 meters and there he was just standing there on the trail right in front of me, no more than four meters away, eating a palm leaf, collar on,” Jordan says. “I just stood and looked at him, and he turned his head and looked at me, and then went right back to eating. It was great to see him and to see that he was healthy, knowing that we had both spent the hurricane in the forest.”

By the time Jordan came back after leaving to collect his equipment, Almuk had moved into the forest, which was badly damaged by Hurricane Otto in November of 2016. When Dans collected Almuk’s collar this month, it was also damaged, but the team has still managed to pull all of the data from it, including Almuk’s 4,300 location points in the seven months he was collared before the hurricane, and 4,500 location points in the 10 months after.

Preliminary analysis of the data is illuminating. Before the hurricane, Almuk walked through the forest freely to get to a creek in the northern part of his home range. Like rhinos, tapirs tend to walk the same paths, creating trails in the underbrush because of their size (they’re the largest terrestrial mammal in the Neotropics). After the hurricane, however, the data indicate that Almuk stopped walking far distances through the forest, going along the river instead. Jordan believes that it takes the tapir too much energy to walk across hurricane-damaged forest and exposes him to too much sunlight where trees were knocked down. So, by walking along the river, he’s expending less energy and regulating his body temperature. These data are unique, and may be the first to show how a natural disaster influences the movement and behavior of an endangered mammal.

On the Tapir Trail

Although Wes only had his collar on for about three months before the hurricane hit, the data from his collar are also proving invaluable. How the animals move pre- and post-hurricane is only one question Jordan, Dans and team are hoping to answer. The data on the collars can also help the biologists determine how the animals move through Indio Maíz, where they are foraging, where they’re sleeping, their home range, how individual home ranges overlap and even help provide a population estimate for the tapirs in Indio Maíz. 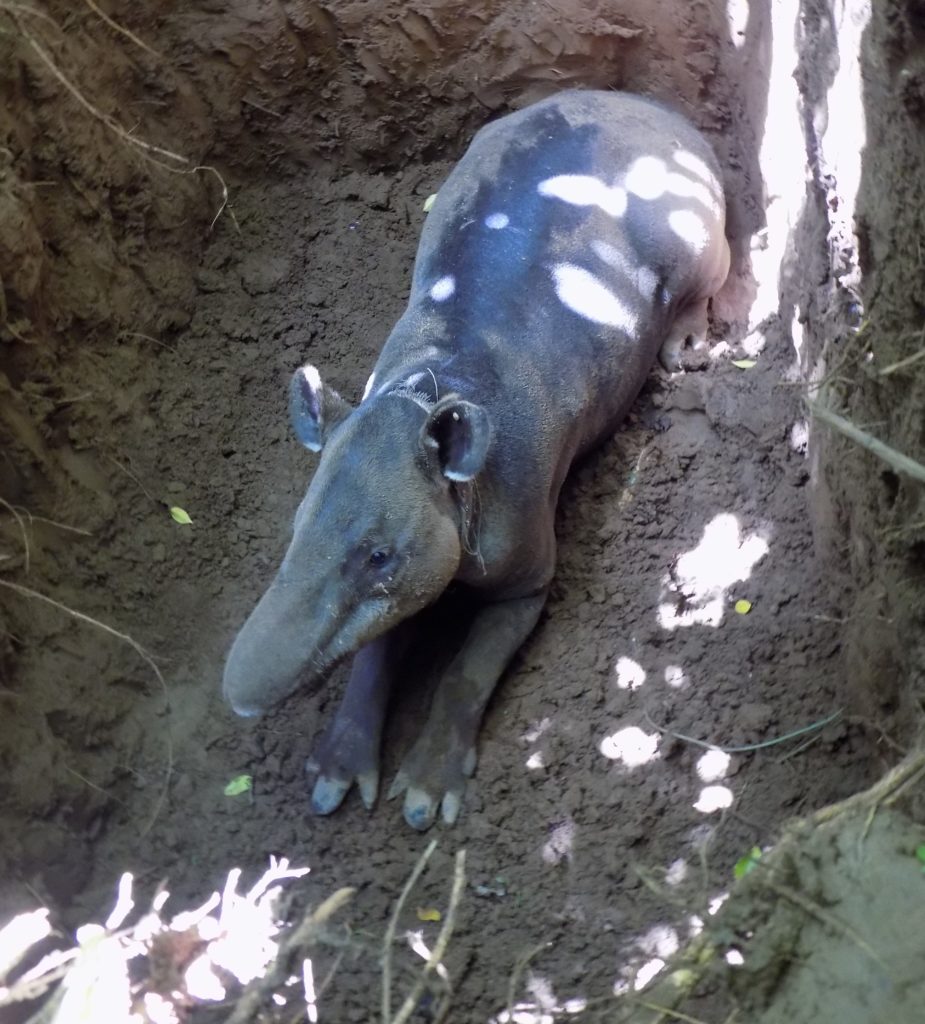 Almuk the Baird’s Tapir was recaptured in March and his collar is providing unique data showing how Hurricane Otto has impacted his movements through Indio Maíz Biological Reserve. (Photo courtesy of Nicaragua Tapir Project)

“This gives us the level of detail that we need to make sure any conservation interventions we propose make sense according to the movement ecology of Baird’s Tapir,” Jordan says.

For example, Dans says, the information can help conservationists figure out the most important areas for tapirs, with all the resources that they need to survive, and to make recommendations to the Natural Resource Ministry to create new protected areas in other places within the species’ national range. Each tapir capture also gives the team—which includes a veterinarian—the opportunity to determine the health of the animals to ensure that in addition to the threats they already face, there is no risk of disease wiping out the population.

These measures are especially important for a species that has suffered declines of more than 50 percent over the past three generations as the result of widespread hunting and habitat loss across their range from southern Mexico to northern Colombia. Only an estimated 3,000 to 5,000 adult Baird’s Tapirs are left across Central America. The data from the animals’ collars will feed into a regional tapir conservation action plan, set to be finalized later this year. 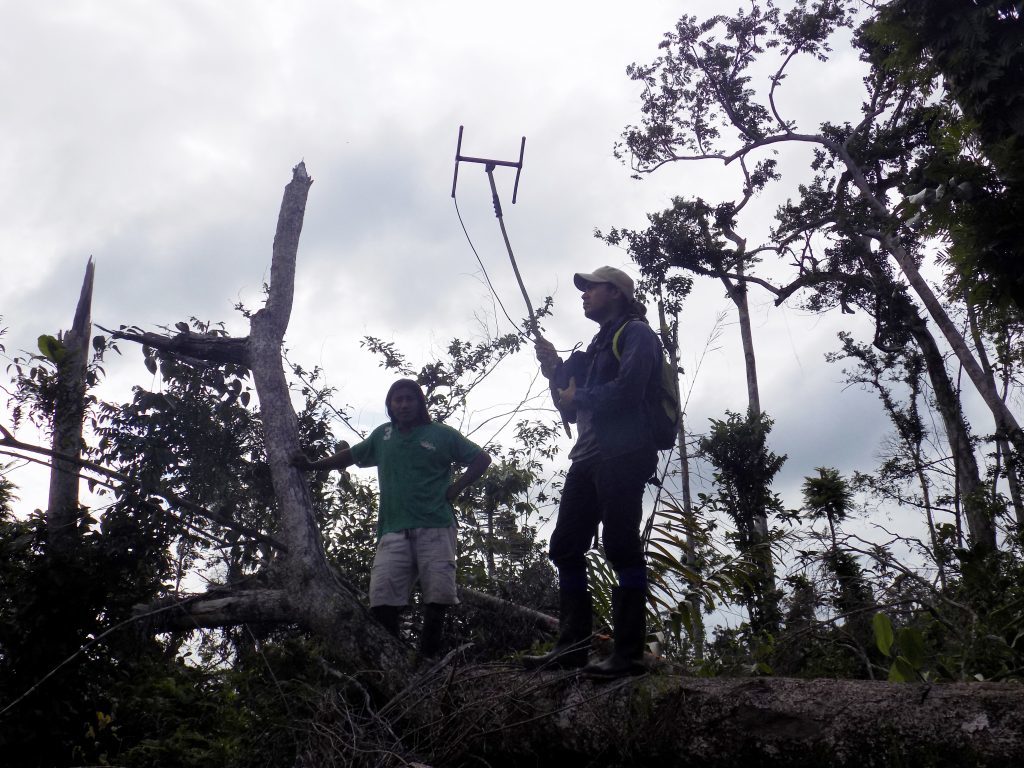 Dans in search of Baird’s Tapirs Almuk, Wes, and Suksuk in 2017. (Photo courtesy of Armando Dans)

Dans will return to the field in mid-April to try to recapture a third tapir, Suksuk, who was collared in 2016, but whose collar also hasn’t yet fallen off. In addition to comprehensively analyzing the data coming in, the team also hopes to use similar efforts to study the corridors that are key to tapir movement and how the animals use areas that are less pristine than Indio Maíz, and even more affected by human disturbance. They’ll also eventually be collecting data from the newly collared tapirs and from Almuk’s new collar, which is set to fall off in October of this year. They won’t likely try to collar any additional tapirs until next year, in their annual adventure to do so.

“Whenever I see a tapir in the wild, I feel so lucky that this animal still lives in my country, in my region, in the place I grew up,” Dans says. “There aren’t many of these animals left globally, so it makes my country’s work protecting the species that much more critical. It’s important to the country, to the people, to the forests, and to the planet to preserve this species.”