Standing With our Planet’s Caretakers on World Ranger Day

By Global Wildlife Conservation on August 01, 2018

It was mid-morning in a reserve in Zimbabwe when a senior ranger came to deliver the news. “There’s a baby,” was all he said at first to GWC’s wildlife crime prevention officer, James Slade, who at the time was senior warden of the reserve. Earlier that morning, a team of rangers had found the tracks of an aging female Black Rhino. They followed her tracks and then suddenly…the four tracks became eight.

“The rangers hadn’t realized that the rhino was pregnant,” Slade says. “The light in this rangers’ eyes as he told me about the events of that patrol will stick with me forever. This hardened veteran, on the verge of tears knowing that the rhino population was increasing, knowing that a new life had begun, was so inspiring. I knew then that there was real hope for conservation efforts, and that that hope was thanks to rangers.” 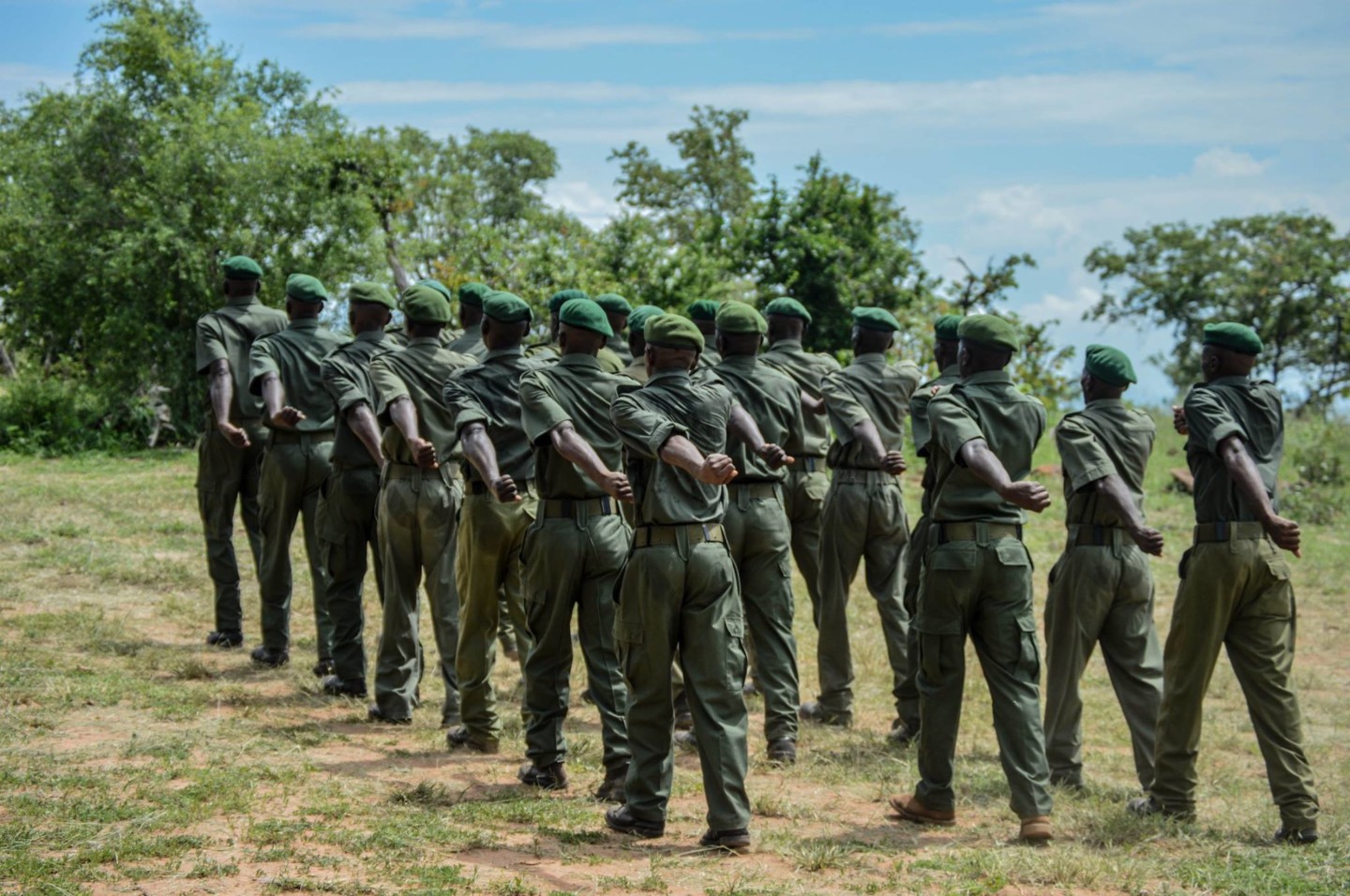 All around the world, passionate individuals like these Zimbabwean rangers are risking their lives day in and day out to protect the life support systems on which we all depend—our forests and other wildlands. Rangers, both men and women from government agencies, NGOs, private conservancies and local and indigenous communities provide the first line of defense against the serious ailments plaguing our planet, protecting our wildlife and wildlands from poaching, habitat loss, pollution, fire and other threats.

A world without rangers would be a world that simply could not sustain life.

Yet rangers in many parts of the world are chronically underpaid, uninsured, undertrained and underappreciated. More than 1,000 rangers have been killed on duty in the last decade according to the International Ranger Federation. A 2016 study conducted by WWF and Global Wildlife Conservation found that out of 40 countries where rangers were surveyed, 28 percent did not provide rangers with any access to health insurance. Thirty-five percent did not provide them access to life insurance and 53 percent failed to provide long-term disability insurance. Another survey that same year found that 66 percent of rangers in Asia and Africa were not given the equipment they need to be successful at their job.

Singing chant of ranger trainees from GlobalWildlife on Vimeo.

Not only do rangers do their job under poor working conditions and without any protection, the complex vocation itself is, far and wide, not considered a real profession even though rangers must develop extensive and diverse skills. These include knowing first aid, search and rescue tactics, tracking skills, wildlife crime prevention, species identification, ecology, visitor education, and local community engagement.

“If conservation is the planetary health sector, the rangers are the nurses, the orderlies and the technicians,” said Mike Appleton, GWC director of protected area management. “Would you go to a hospital and want to be treated by a nurse who isn’t paid, has no training and no equipment? It is unacceptable that though rangers are protecting the health of our planet, they are too often last in line for resources to do so effectively.” 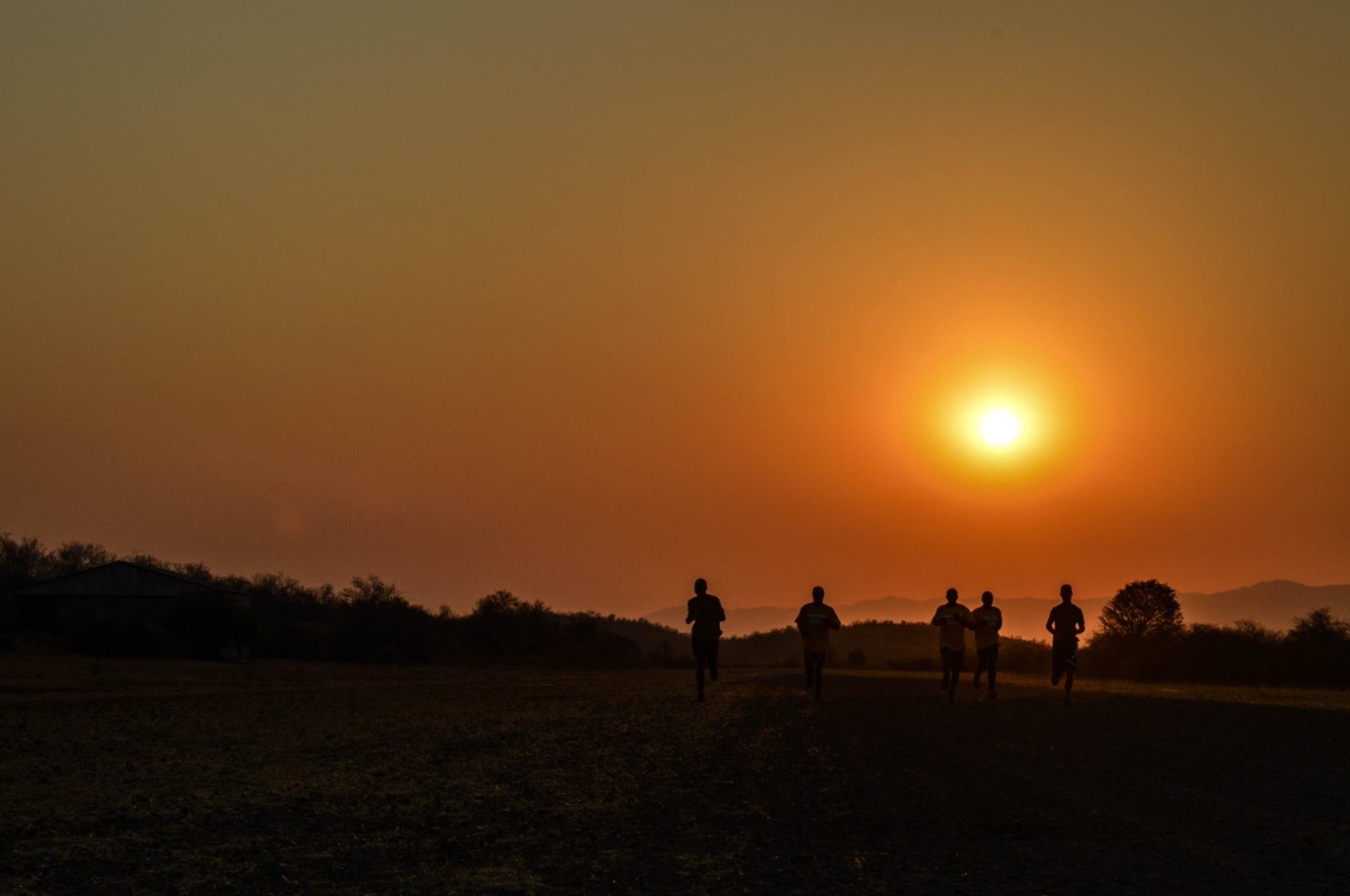 WITH SUCH A DEMANDING ROLE, PHYSICAL FITNESS AND HEALTH IS AN IMPORTANT PART OF ANY RANGER TRAINING PROGRAM. THIS STANDARD SHOULD BE KEPT THROUGHOUT ONE’S CAREER. IN ENVIRONMENTS FACED BY NATURE’S PROTECTORS, IT CAN OFTEN MEAN LIFE OR DEATH. (PHOTO BY JAMES SLADE)

In addition, unlike other dangerous service sector jobs—police, firefighters—many countries lack both standardized training programs for rangers and a clear hierarchy for advancement throughout their career. These shortfalls are evident in the fact that there is not even a standard name for the job—rangers can also be called wildlife wardens, forest guards, foresters, scouts or watchers. We aren’t even sure how many individuals are working as rangers. Global Wildlife Conservation is currently conducting a survey in conjunction with the Game Rangers Association of Africa, Asian Ranger Federation, International Rangers Federation, WWF and EuroParc Federation just to get at this seemingly basic information.

Stand with the World Rangers

So today, on World Ranger Day, we’re calling for anyone who values clean air, clean water and the diversity of life on Earth to join us in standing with the world rangers and celebrating their vital role in protecting all life. 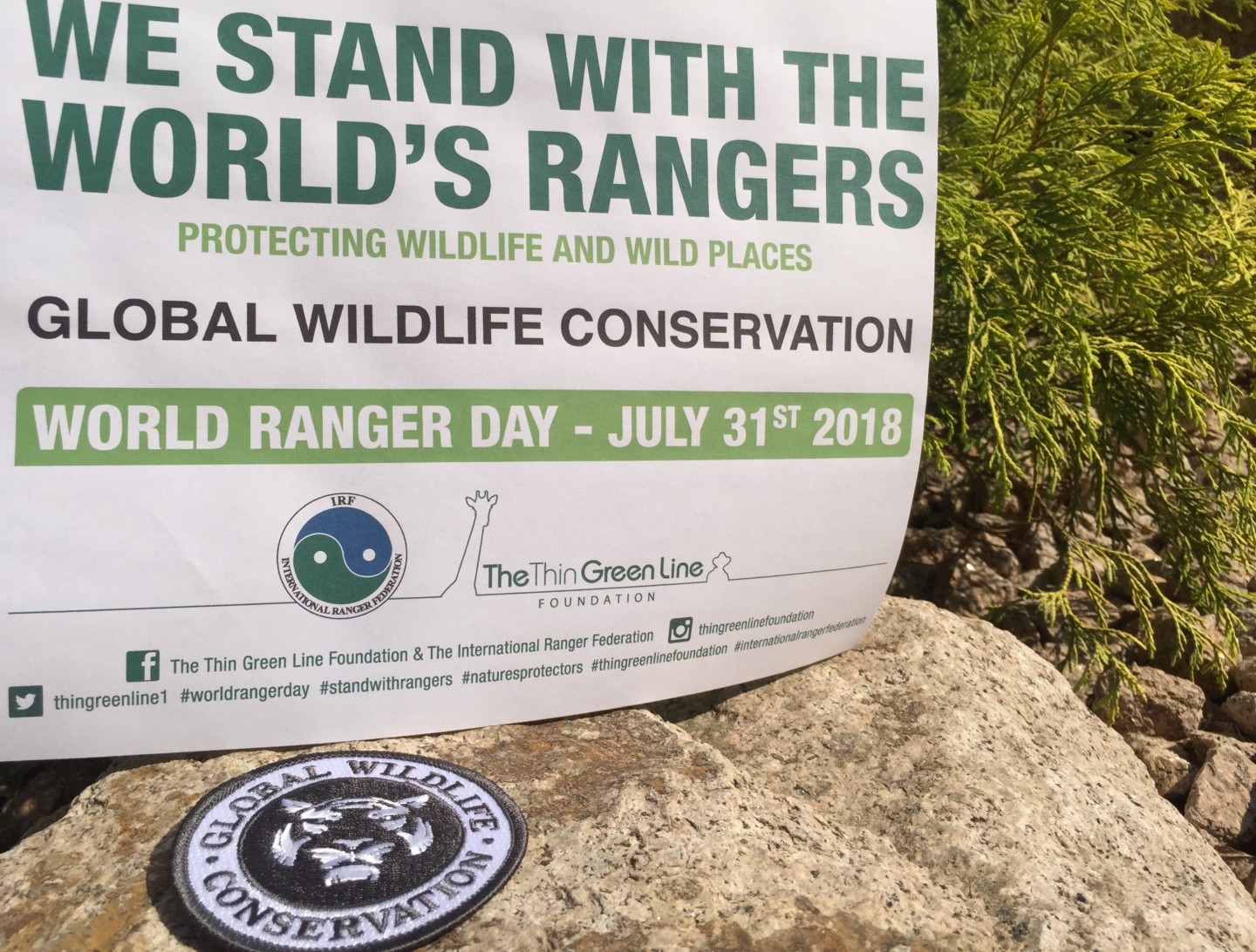 How can you help?

Whenever you visit a park anywhere in the world, thank the rangers there and ask them if they’re happy with their working conditions. Talk to the people in charge about why you appreciate the work the rangers are doing and why you want to see significant improvements for the profession.

Consider supporting the Thin Green Line Foundation, a group that works with grassroots initiatives that are improving overall conditions for rangers. Recently, for example, the foundation worked with the Game Rangers Association of Africa on a deal with the South African Tourism Insurance Bureau to ensure that members of the association would qualify for insurance.

Consider supporting any of the more than 75 ranger associations that have formed in recent years in more than 50 countries. Rangers are getting organized, and these associations are key to bolstering global recognition of rangers’ vital work.

Show you stand with park rangers of the world in their fight to protect wildlife by taking a picture of yourself holding the “I stand with the World’s Rangers” poster and sharing it on your social media accounts with the hashtags: #worldrangerday #standwithrangers #naturesprotectors #thingreenlinefoundation #internationalrangerfederation 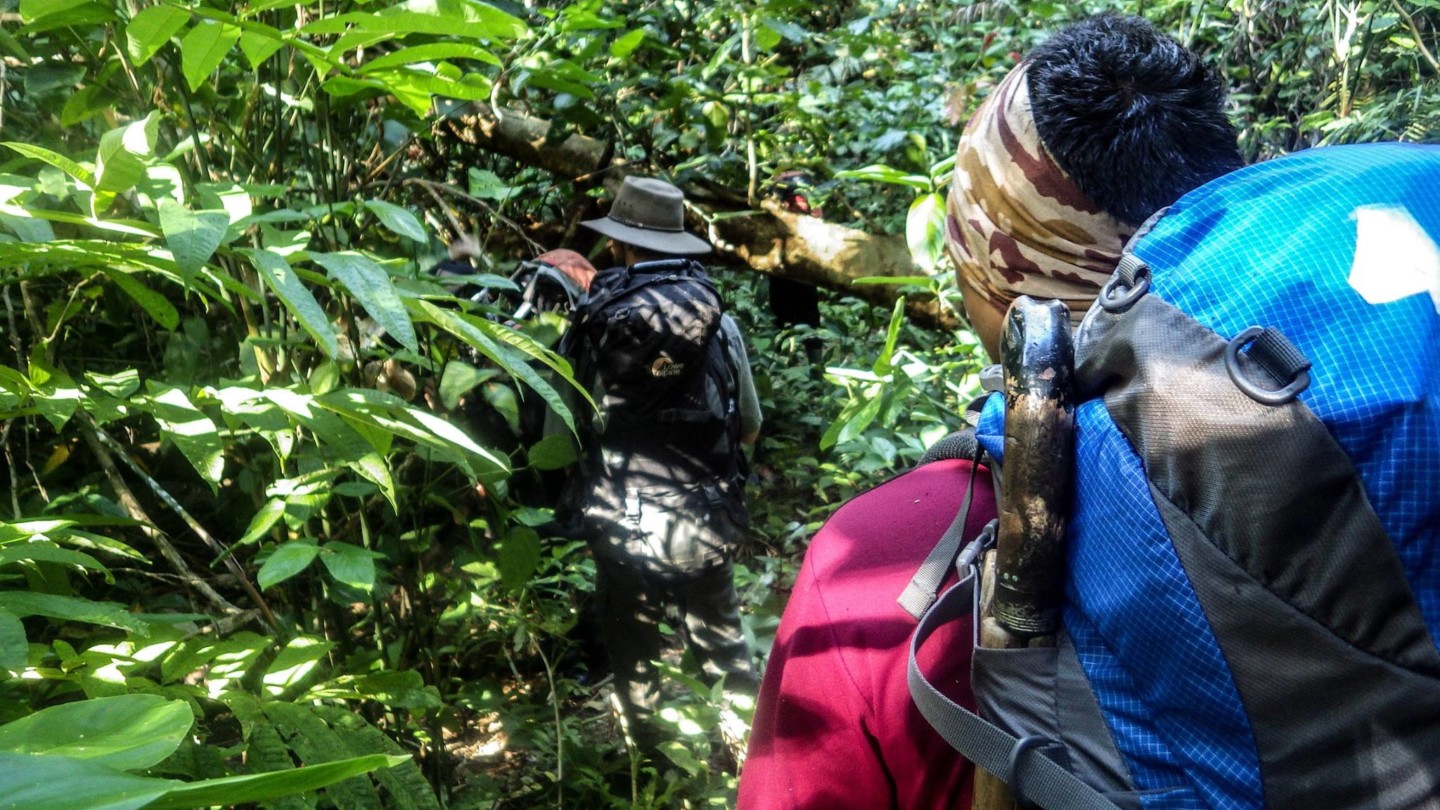 THE BEGINNING OF A WEEK-LONG EXTENDED PATROL IN TO THE FORESTS OF SUMATRA. RANGERS AROUND THE WORLD FACE A VARIETY OF ENVIRONMENTS, CHALLENGES AND HARDSHIPS, ALL IN THE NAME OF DUTY. (PHOTO BY JAMES SLADE)

Encourage your policymakers to put government support behind rangers to turn this into a genuine profession, with decent salary and insurance, a career track, job security, training and sufficient equipment.

“As the threats to our planet mount and become more complex, the role of rangers in caring for the health of our planet has never been more critical,” said Barney Long, Global Wildlife’s senior director of species conservation. “Let’s support their incredible, life-saving work by standing with world rangers today—and every day.”

(Top photo: Rangers stand at attention during ‘drill. ‘While not all rangers have to adopt a para-military style of training, in Africa, it is becoming more common and unfortunately, necessary. While these skills are integral, rangers should remain first and foremost, conservationists. Photo by James Slade.)