Shifting From Biology To Sociology: Doing Interviews Of Communities To Understand Their Willingness To Protect Local Wildlife

In March 2018, I spent three weeks training a team of staff, graduate, and undergraduate students from Vinh University to conduct community interviews in the Annamite Mountains of Vietnam. The goal of the interviews: collect information on whether local residents would be willing to protect wildlife instead of snare it, and under what circumstances they would be willing to do so. The challenge: this team was used to doing biology surveys and interviews with communities and rangers to understand hunting patterns and the presence or absence of certain species, but not to gather information on social science topics like perceptions and opinions on hunting and motivational triggers.

We started off with a one-week crash course on all the basics of environmental criminology. Crime really boils down to opportunity: the convergence of a willing offender, a vulnerable target, and the lack of a capable guardian at a specific time and place. Offenders make semi-rational choices about committing a crime by weighing its cost and benefits. That choice is shaped by their experience and their knowledge of their environment. All these principles also apply to the decision to be a wildlife guardian. We learned these principles to understand how to turn community members (some of them hunters) in villages near Pu Mat National Park, Thua Thien Hue Saola Reserve, and Quang Nam Saola Reserve into willing informal guardians (a criminology term that refers to non-law enforcement personnel informally protecting a resource) by figuring out what would tip their cost-benefit analysis in the direction of guardianship. 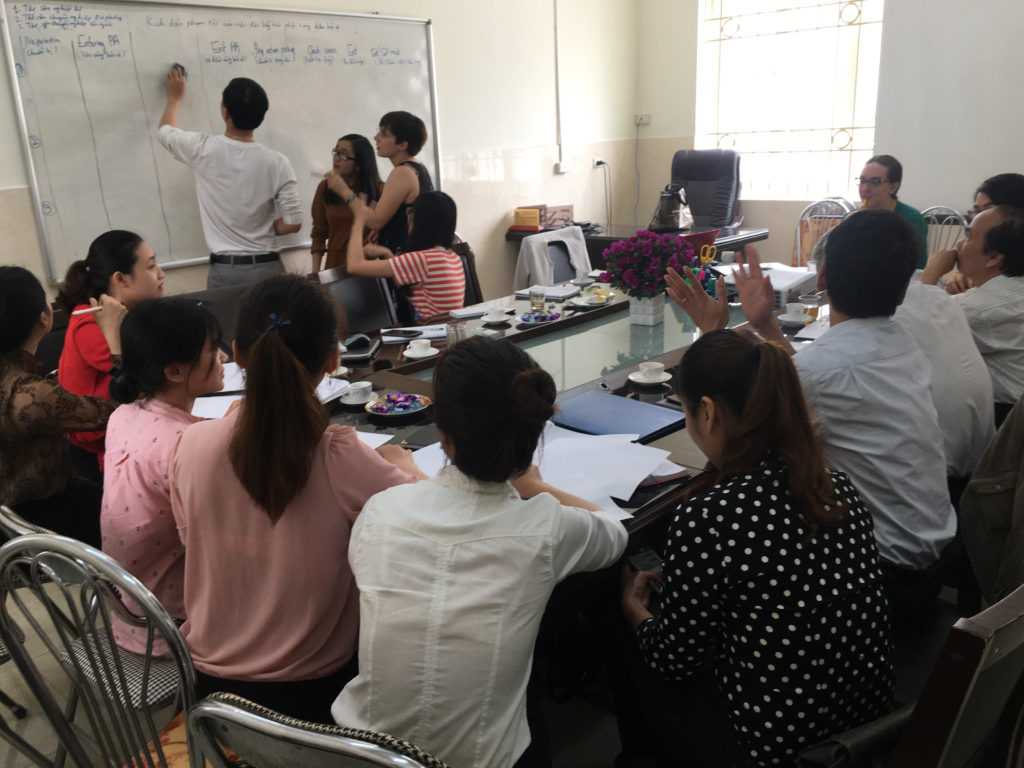 After learning these basics, we moved on to more practical training on how to do social science interviews and group work to build a loose questionnaire that would be culturally appropriate for our audience. A partnership like ours between a U.S. university specialist team and a Vietnamese university used to working in these communities is especially beneficial because researchers like myself can bring the missing subject expertise (in this case, criminology) and the local university can provide the knowledge of context that makes my expertise applicable on the ground. We debated and reshaped questionnaire questions for several days, arguing the merits of certain phrasing: i.e. would asking a question directly scare the interviewee? How do we get someone to admit to illegal behavior when it’s not in their best interest to do so? We discussed whether or not that phrasing got to the core of what we wanted to know. Finally, we came up with 24 keys questions to ask community members and it was off to Pu Mat National Park to try out those questions.

The village we visited to train primarily survives on farming (and hunting). The challenges of the field were less present here than at other locations where our teams will interview communities. Cell reception was spotty, but the village did have regular electricity (with some power cuts while we were there) and running water. Cooking is done over an open fire set apart in the kitchen area, an area that the family cat favored to warm itself. This particular mama cat had kittens while we were there and one of our team members accidentally discovered them hidden in a cupboard of the house one day! The challenge for our team of students in this environment was not so much material but more acclimatization to a completely foreign community (with slightly different habits and customs) and building trust with community members so they would talk with them about illegal hunting. 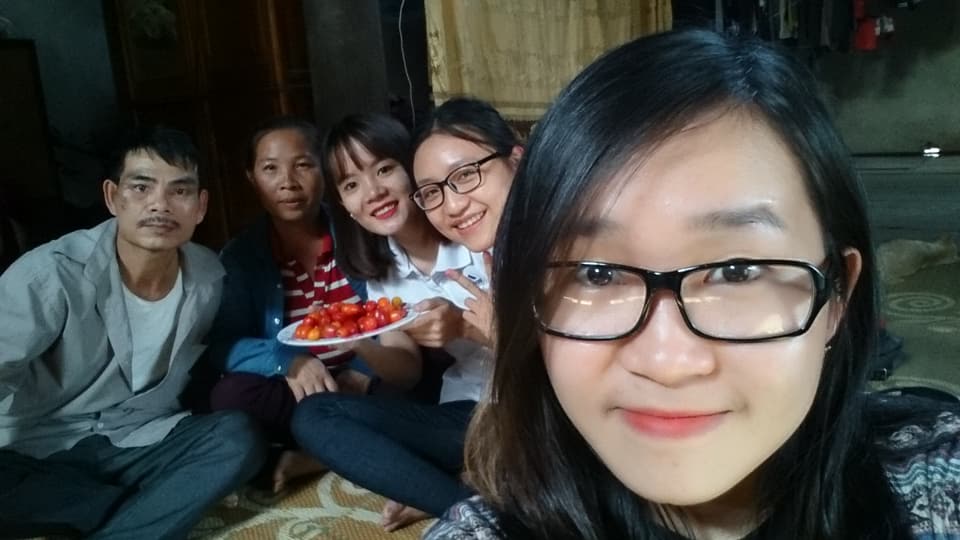 Some of the team with one of their interviewees.

The team spent time walking in the community to get to know people and played the occasional game of impromptu volleyball with the school kids. The latter drew large crowds of children and teens to watch despite (or perhaps because of) our abysmal volleyball skills. It is a testament to the friendliness of the Vietnamese people that on my own walks around the village I regularly had people invite me to sit with them and share a snack despite my complete lack of Vietnamese language skills and their lack of English. One particular roadside vendor spent 20 minutes sitting with me and cutting up apples for me to eat while trying to teach me rudimentary Vietnamese using objects she was selling (a toy car, a shirt etc.).

Then came the key test. It’s easy to think you know what to do when you’re in the classroom. It becomes much harder to remember all the theory you were taught when you’re actually interviewing someone who’s responding to your body language and questioning why you want to know what you’re asking. All in all, the team realized, more than ever, the importance of building rapport with your interviewee; something that really can’t be taught. It’s like trying to teach someone to be a social person. I can teach you the basic body language to keep the person you’re talking with engaged: make eye contact, lean in, parrot what they say back to them to show you listened, but in the end, being social is an instinct. Social science interviewing is also an instinct. You have a couple of hours to get someone to believe that they want to help you answer your research questions and give you as much information about your topics of interest as possible. Then you have to manage to write all that information down coherently (without biasing the data with your own on-the-fly interpretation, so writing answers word for word) while keeping the person engaged and talking. 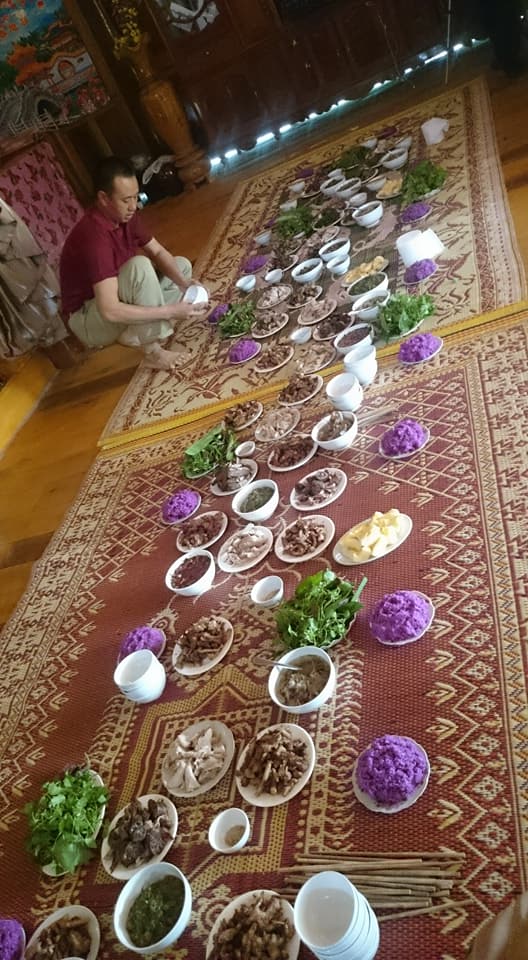 Sharing a meal with our interviewees and hosts.

There really is no one method to do this. Some of my team found that drinking and/or sharing a meal with your interviewee was the best way to break down social boundaries and get key information. Others used their own feelings of exhaustion and isolation from being in a new place to connect with the people they were staying with, bonding over missing home and family, and had their hosts vouch for them with interviewees so they would open up during interviews. Each team member developed their own unique interviewing style based on their social strengths. And in the middle of all this, we did get to visit a lovely waterfall with small fish that cleaned your feet if you stood still long enough (see picture)!

Now in May, after three weeks of training and a month of fieldwork, we’ve completed 75 interviews. We’re still in the process of reading through the responses, but what has been coming up a lot is that community members feel they don’t have a “duty or the permission/authority” to protect wildlife. It’s like they’re looking for someone to give them permission to care for their own environment. It will be interesting to see if this lack of collective efficacy is present in the other three communities the team will visit at each site. I look forward to understanding what other factors motivate or hinder these communities from protecting wildlife!

(All photos courtesy of Julie Viollaz)

Julie Viollaz is a GWC associate conservation scientist, research associate at Michigan State University and works as a consultant on wildlife crime and conservation criminology issues. She specializes in field interventions to help communities and NGOs apply crime prevention techniques to poaching and wildlife trafficking.