Sharing An Apple a Day Keeps the…Poaching Away

During the four months that GWC’s criminologist Dr. Julie Viollaz and her team spent in some of Vietnam’s most remote villages in the Annamite Mountains, one moment in particular stands out: a rural roadside vendor Viollaz had never met beckoned Viollaz over while she was out for a walk and spent 20 minutes cutting up apple slices to share while trying to teach her new friend rudimentary Vietnamese.

For Viollaz, her students and her colleagues, this kind of simple connection—one that breaks through myriad social barriers—underscores the profound potential of conservation criminology, a new method to address the complex drivers of wildlife crime, such as illegal snare poaching. 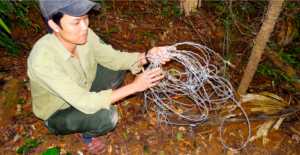 This hunting technique, which includes the use of homemade and inexpensive wire snares that catch animals, makes no distinction between common and endangered species, killing species unique to the Annamites of Vietnam and Lao regardless of their size and shape, including Saola, Large-antlered Muntjac, Grey-shanked Douc, Truong Son Muntjac, and Owston’s Civet. The pervasiveness of this type of hunting has resulted in what biologists have called “empty forest syndrome.” There has been an exponential increase in the number of snares set both inside and outside of protected areas over the past 20 years, despite rangers’ best efforts and regulations against the practice.

“It can be hard to get people to open up, especially when it’s a white foreign woman who comes to a rural Vietnamese village, doesn’t speak the language, and starts to ask about some of the illegal things people are doing in that village,” says Viollaz, who is now a wildlife crime research officer at the United Nations Office on Drugs and Crime. “So we needed to invest in  building connections so that the villagers would start to talk about these topics naturally as though we are part of the fabric of their daily lives. In the end, we were learning something from these people—they were giving us a gift—and we approached everything we did with that mindset.”

And what they were learning, ultimately, were the necessary ingredients for developing a tailored, community-informed, snare prevention strategy that leverages social capital and draws on the field of criminology to prevent the wildlife snaring that is destroying the very ecosystems that sustain the villages. This approach, tapping into the community itself for answers for snare prevention, is markedly different from traditional anti-poaching measures, says GWC’s senior director of species conservation, Dr. Barney Long.

“Anti-poaching focuses on individual criminals,” Long says. “This approach is about focusing instead on the activity of snaring, which is illegal, and trying to prevent the crime through social cohesion. It’s about creating a community-driven social shift that makes it hard for anybody in their community to have opportunities to be involved in that crime.”

Conservation criminology is a relatively new field that considers the intersection of human behavior, conservation, and criminology. In the Annamite Mountains, the approach helped build understanding about the societal and cultural drivers of wildlife crime, the enabling environment, and the motivations of the individuals involved, to develop a prevention strategy. It is one of the main pillars of GWC’s wildlife crime prevention work, in close partnership with Michigan State University. The first step to investigating the unique enabling factors is to develop a carefully crafted set of questions to pose to community members. 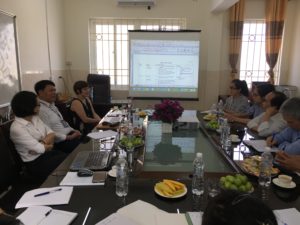 In March of 2018, Viollaz prepared her team—a group of 12 staff, graduate and undergraduate students from Vinh University—to conduct community interviews in 12 villages near the protected areas in which the snaring is occurring: Pu Mat National Park, Thua Thien Hue Saola Reserve, and Quang Nam Saola Reserve. Before going into the field, they needed to understand the best people within the communities to talk to, the plants and animals of the landscape, the traditions of the communities, government influences, and the communities’ history with conservation.

They also needed to consider how to phrase the questions that would get at the information that they needed and when the best time to ask them was. Viollaz instructed the students to wait at least a week before asking any questions, and instead to spend that time getting to know the families they were staying with and helping out with household chores.

“One of the things that is so unique about this collaboration was intentionally engaging students from the university,” says Dr. Meredith Gore, a conservation social scientist at Michigan State University, who helped lead the study. “At the end of the day, that’s what’s left behind—the capacity and the skills the students were able to learn in terms of working with communities, conducting social science and crime prevention research, dealing with the challenges of fieldwork. Those things are important for the future and sustainability of Vietnam’s natural resources.” 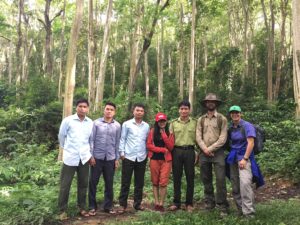 In addition to preparing questions for leaders and general members of the community, the team also designed a strategic set of questions to ask potential poachers themselves to better understand the motives for their behavior.

“There aren’t a lot of studies even in criminology that interview offenders and ask them how they do things, why they do what they do, and then use that information as a basis for crime prevention initiatives,” Viollaz says. “I wanted the team to understand that the people they were interviewing weren’t bad people, even if they’re poaching. For wildlife crime, especially illegal hunting, it’s not that clear cut. People can have very different motivations for doing it. And regardless of their motives, their role as hunters--with their key knowledge of the forest and its wildlife--is vital to finding solutions. They are best-placed to know how to solve the problem.”

Guardians of the (Wildlife) Galaxy

What these interviews revealed has provided a guidepost for strategies that could make a profound difference in an area of the world where traditional anti-poaching measures simply haven’t worked. Ninety-six percent of the interviewees revealed that they know that it is illegal to hunt in protected areas, which means that a lack of awareness is not an enabling factor. In addition, no more than 35 percent of the interviewees felt that they were empowered to intervene if they saw someone else setting snares or coming out of the forest with wildlife meat—or that intervening would make a difference.

For Viollaz’s team, this is a great place to start.

“To me, the most interesting result from the study was understanding how we can leverage people to become engaged informal guardians of wildlife,” she says. “Informal guardians only act using their social bonds with people to stop others from doing something that’s not good for the community overall. But they have to believe that their actions will have a positive impact.”

To identify potential informal guardians, the team recommends looking for individuals who are in the community on a regular basis so they can see when crime is happening, who know their community well enough to know when something going on isn’t quite right, and are willing to intervene. And to ensure that individuals are willing to intervene, Viollaz’s team recommends a strategy that came right from the interviews themselves as a way to create a sense of duty—establishing village-chosen rules about hunting prohibitions and incorporating them directly into village conventions.

In addition, members of a local youth group recommended “taxing” villages that turned a blind eye to snare poaching by their members and using those funds instead to reward neighboring villages that were using their social capital to prevent fellow community members from hunting. Youth groups, women’s unions and other community leadership groups should continue to be tapped for their influence, Gore says.

“One of the most important findings from this work was that local people are an under-tapped resource for protecting natural resources from illegal exploitation,” she says. “There are already groups of individuals in these communities that are working for social good, so we can tap into their activities and bring conservation into their messages.”

Ultimately, providing solutions that are community-driven bolsters the likelihood for success, Viollaz says. 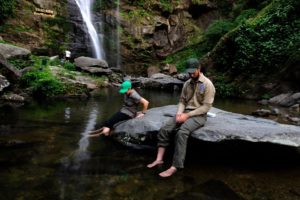 “The interviews with local people helped reveal that these communities have a sense of pride in the fact that their community is doing good work,” she says. “That’s huge, and something that can be leveraged. When we go back into the communities, we want to say that while we used our knowledge of criminology and the data we gathered, the solutions ultimately came from the communities themselves, giving them a sense of ownership and drawing on that pride to leverage change.”

Moving Toward a Snare-Free Future

Now that their report is complete, Viollaz, Gore and team have handed off their recommendations to GWC’s partners on the ground who can help implement the suggestions, including Fauna & Flora International and World Wildlife Fund. Then they’ll measure the effectiveness of the strategy.

If the community-driven solutions strategy works here, Long says, it has the potential to work in other places of the world where wildlife crime is pervasive. 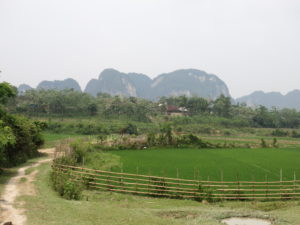 “Even though dedicated people—including myself—have been working on anti-poaching measures in Vietnam for a long time, we’ve just seen an intensification of poaching through the years,” he says. “We needed a completely different approach. And if we can get this approach to work in Vietnam, we can get it to work in other places with far less poaching pressure. If it works here, we’ll take it to other places in Vietnam and beyond.”

And for Viollaz, no matter where in the world the research takes her, forming that strategy will always begin with something as simple as sharing an apple with a stranger.

“It’s so easy to build connections with people if you just take the time to make a simple gesture,” Julie says. “It takes no time to build that groundwork, that initial spark. You would be surprised by how far those sorts of small gestures go, even when you’re trying to address something as complex as wildlife poaching. Sometimes it’s as simple as sharing an apple.”