Missing posters for the Kisangani and Semliki Red Colobus monkeys would have few details to help detectives guide their sleuthing. Their last known locations? The dense forests of Eastern Democratic Republic of Congo. Descriptions? Large monkeys with varying shades of red, gray, white and black fur. Known aliases? Semliki also goes by Eastern Red Colobus. Kisangani also goes by Lang’s Red Colobus. Last confirmed sightings? About 40 years ago for the Kisangani, though hunters may have killed two of the monkeys in 2012. The Semliki was lost almost as soon as it was discovered. It was first described in 1991 and has not been seen in 29 years.

Though the cases have always seemed daunting, local scientists have recently offered their help to crack the case of these two missing monkeys, both of which are among GWC’s most wanted lost primates. One has been found. The search is still on for the other.

Scientists with the University of Kisangani in the Democratic Republic of the Congo and the TL2 Project from Frankfurt Zoological Society (FZS) took on the challenge of searching for the Kisangani Red Colobus. RACOD, a local non-governmental organization in Democratic Republic of Congo, with the support of the ICCN and the Wildlife Conservation Society, led the search for the Semliki Red Colobus.

Though the search teams were looking for two different species, their processes were very similar. They started by harnessing local knowledge.

Both teams interviewed potential witnesses--the local communities that live in and around the forests of eastern DRC. 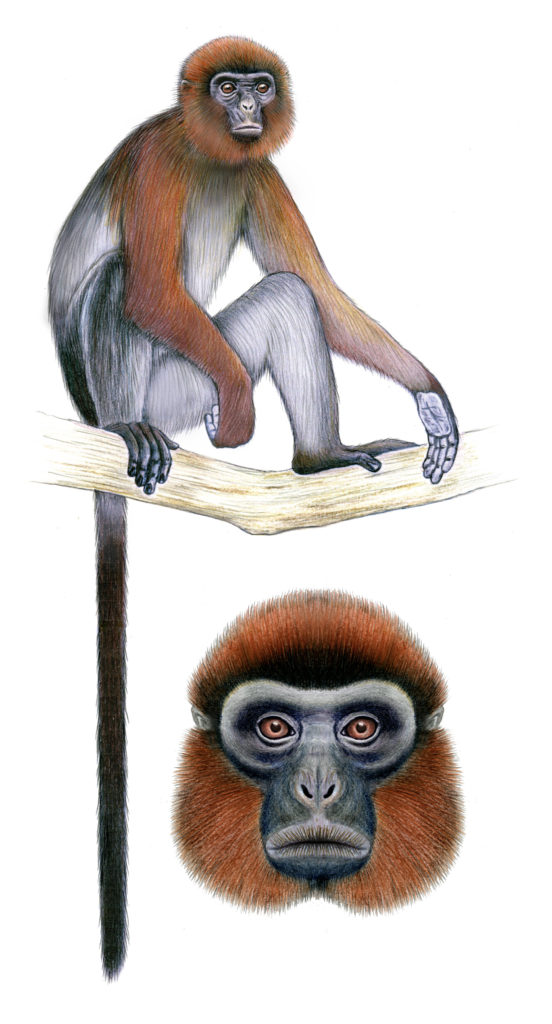 A Tale of Two Searches: Kisangani

The team looking for the Kisangani Red Colobus, led by Paul Falay and Desire Kaisala, from the University of Kisangani, visited villages and met with tribal leaders.

“Moving from one village to another was the most difficult part of our search because of the poor state of the paths and the long-abandoned roads, which made it difficult to move,” writes Falay in an e-mail. “Even with bicycles, we had to hire people to carry our bicycles, sometimes over long distances--4 days of walking in one case.”

Despite the difficult travel routes, they managed to visit 92 localities and interview 125 people. During the interviews, people told Falay and Kaisala that they had seen monkeys that looked very similar to the lost Kisangani Red Colobus.

“[T]he Congo is large; there are many forests where no scientific research has been done, including the Kisangani red colobus range,” says Falay. “There is still a lot to be discovered here.”

The team mapped out the monkeys’ possible locations and tried to determine how probable it was that they would find red colobus in each spot--specifically the lost Kisangani. They determined that they would search areas of the forest between the Maiko and Lindi Rivers, and forest plots between the Lindi and Aruwimi Rivers. 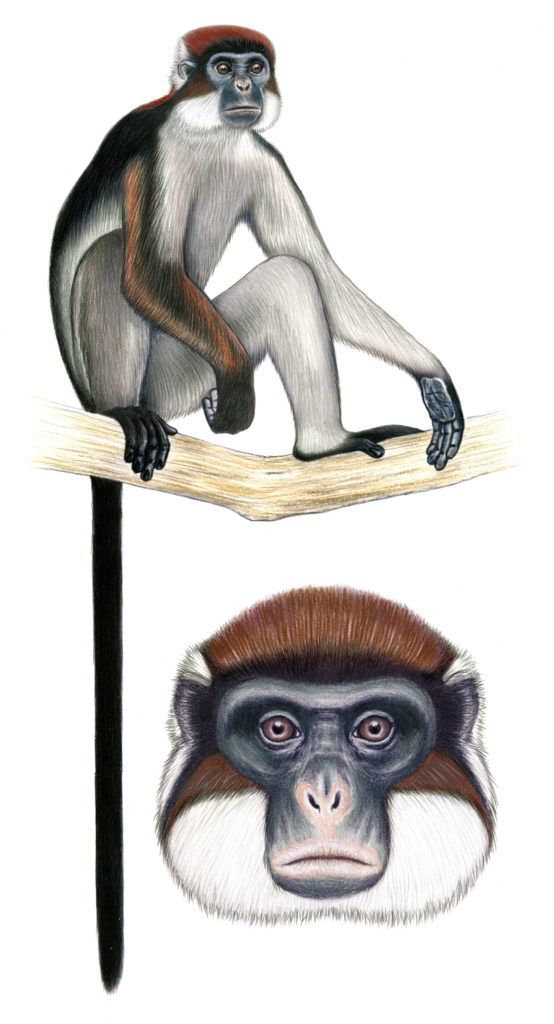 A Tale of Two Searches: Semliki

Sébastien Mupenda and Benjamin Wilondja led the RACOD team searching for the Semliki Red Colobus in Mt. Hoyo Reserve. Their first step was to win the trust of the people in the villages surrounding Mt Hoyo. They started by spending two weeks meeting with the traditional chiefs of the villages and explaining what they were searching for before interviewing local villagers.

Red colobus had never been the target for a survey or patrol in the area before, so hunters were skeptical to share any details regarding the hunting of species.

“What we did was to produce a map, an empty map, showing villages, rivers, and then ask people, ‘we just want to know where you think we can find them? Where can we find red colobus? What might be the size of existing populations?’” explains Deo Kujirakwinja, technical advisor to the search from WCS.

After visiting four villages and interviewing 21 people, the team was able to make a map of possible Semliki Red Colobus territories.

An Open and A Closed Case

Red Colobus are territorial and live in family groups. They don’t usually travel great distances, meaning that it was likely that they could be found in an area where villagers and hunters had seen them before. The question was: were they still there?

Following their map, the Semliki search team split into three groups and spent two weeks searching for the monkeys. The entire time, they had to make sure they stayed on course and close to villages, had access to water, and avoided militia groups. Militia groups are active in Mt. Hoyo Nature Reserve, and the area has seen much violence since the DRC’s civil war during the 1990s. As a result of the instability, rangers don’t patrol the area, which has allowed poaching and illegal logging to go unchecked.

The three Semliki search teams did find red colobus, but they couldn’t be sure if the monkeys they saw were Semliki specifically. Since the monkeys are arboreal, it is difficult to clearly identify them from the ground and they weren’t able to take photos of them.

The rangers with the search teams, many of whom had been trained by the Wildlife Conservation Society, had the expertise to be able to identify individual species, including red colobus. One of the rangers, Benjamin Biriko, had worked for the ICCN in DRC for 23 years and had been working in Mount Hoyo for a decade helped the teams visually identify the monkeys.

“He has been in different habitats and knows the species--especially primates,” says Kujirakwinja.

Although they’re not sure, the teams think it is likely that some of the monkeys they saw were Semliki Red Colobus. A follow-up survey with a bigger budget could yield more conclusive results.

“We were very happy to photograph a species that was almost declared scientifically extinct,” says Falay. “We were witnessing, first-hand, the red colobus living in its habitat within its geographic range. Simply put, successful wildlife photography is often the result of luck, patience and experience, and of course good local guides.” 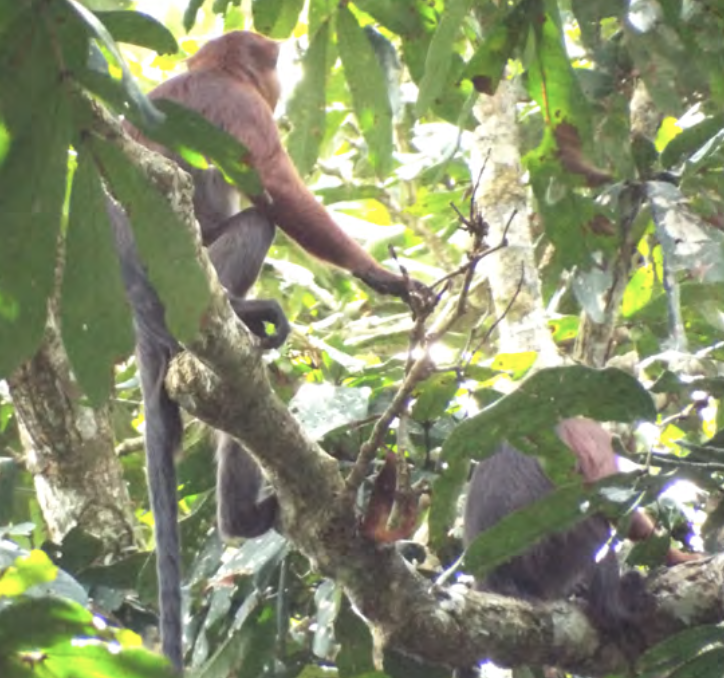 Although the Kisangani Red Colobus is not extinct as scientists feared, it is not out of the woods. Similarly, the Semliki Red Colobus is in a precarious position. In order to safeguard their numbers and help them rebound, they need to be protected from hunting. Both teams think more political will to implement protection for the monkeys and the cooperation of local people could help stave off irrecoverable declines.

A new Red Colobus Action Plan will help with that. The Red Colobus Working Group, which was established under the African Primatological Society and IUCN SSC Primate Specialist Group, is coordinating a range-wide effort aimed at preventing the extinction of red colobus monkeys and using the action plan as its guide.