Search for the Pink-headed Duck: The Interviews

If you’ve been following GWC’s Search for Lost Species initiative, then you know that recently my team was out looking for the lost Pink-headed Duck in Kachin State, Myanmar. The survey team members consisted of: Richard Thorns (that’s me!), John Hodges, Pilar Bueno and Errol Fuller. We visited villages around the Naung Kwin wetland, where we interviewed local farmers and hunters using descriptive flashcards to determine if anyone may have seen the Pink-headed Duck in the area in recent years. We also surveyed flooded wetland using boats and elephants.

Naung Kwin wetland, a moderate area of flooded grassland containing deep interior pools and patches of Elephant Grass jungle, is an area that has been of historic interest for possible Pink-headed Duck survival for some years. It lies north/northeast of Myanmar’s largest body of freshwater and a river at the northeastern corner of the lake, both sharing the name of Indawgyi. The area is not stable and is sensitive to rain inundation and drought. Previous surveys of the region have involved Birdlife International, B.A.N.C.A. (Myanmar’s Biodiversity and Nature Conservation Association) F.F.I. (Fauna and Flora International — though not for Pink-headed Duck specifically) and privately funded surveys, including my own. 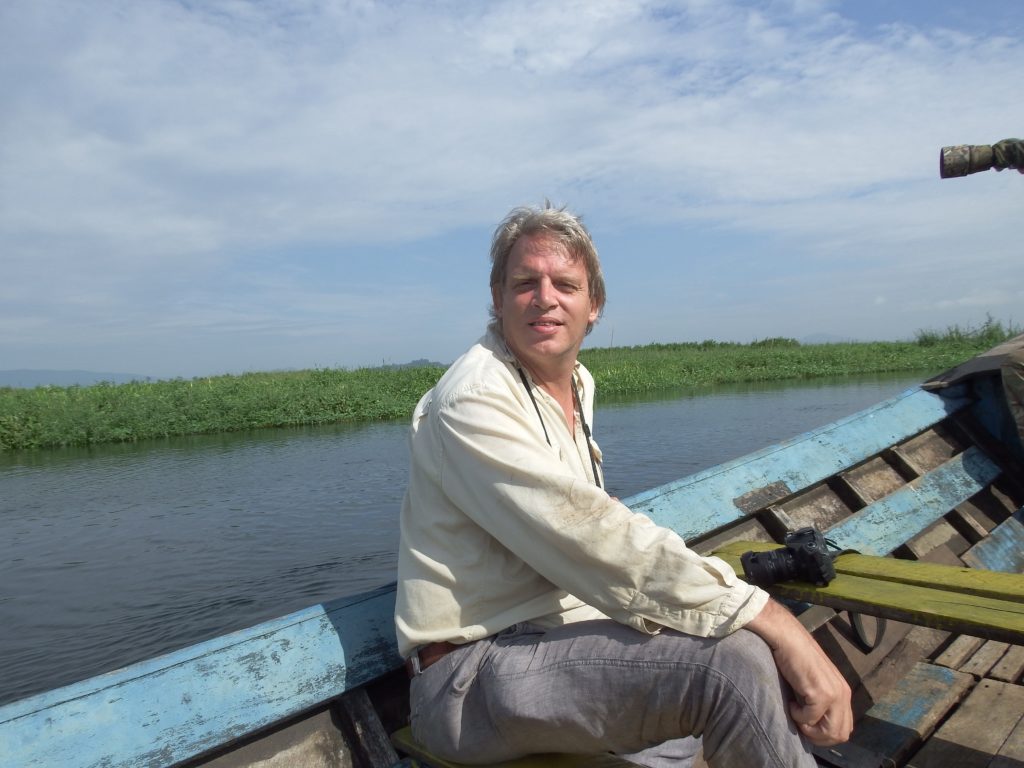 Chaung Wa Village was a priority for us because of an account relayed to me in March 2016 concerning a possible Pink-headed Duck seen “between five and six years ago,” described as very rare and shy and only to be found in Naung Kwin. Also, Chaung Wa is a village where a lone birder returned after a claimed sighting. I was there in 2010 and I remember being told of this story by the village leader.

Anecdotes from Long Ago

On this 2017 survey, Chaung Wa yielded our first new anecdotal information: Mr. Ko Pho Thar Hew was journeying to work to a nearby goldmine on the Ma Pyin Road bordering Naung Kwin many years ago when he inadvertently flushed a flock of ducks (book-identified as Gadwall and possibly pintail). Within this flock he noted a duck with a bright pink head and neck, noting that “the bird looked strange,” according to our guide and, in this case, translator Lay Win.

This wouldn’t be surprising if this unusual bird was contrasting with grey/buff mono-colored Gadwall. This event was 19 years ago, around 1998, at a time when the Indawgyi reserve was in its infancy and hosting its first-ever managing warden, U Sein Tun. He was the reserve’s first warden in 1999, a year after this sighting in 1998. (Interestingly, 1998 was also the very same year in which I picked up my library book and was captivated by the Pink-headed Duck for the very first time!). 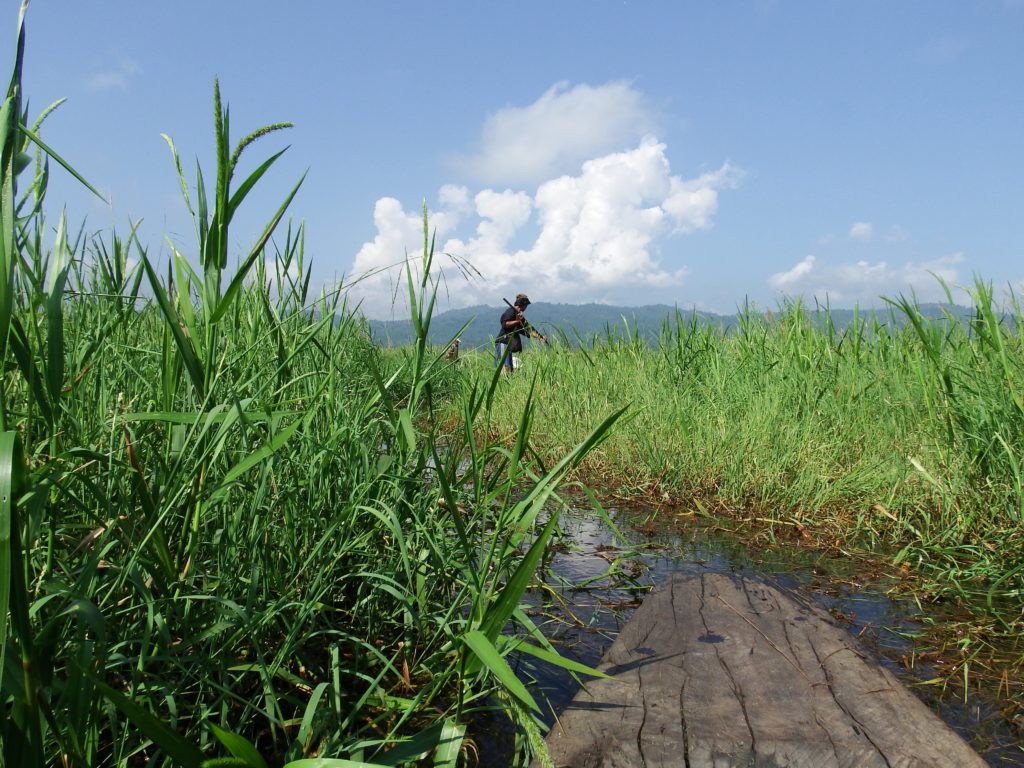 We never managed to find our witness from the six-year old anecdote. At Nyaung Pin Thar Village we interviewed our driver, U Ye Win and also a boatman/fisherman, Ko Tan Aung, who remembered helping Birdlife International in 2003. He told us that 18 months after J. Eames at Birdlife International left the area, a local hunter trapped two Pink-headed Ducks, a male and female (or possibly a juvenile) alive. The hunter then contacted the late Tony Htin Hla at B.A.N.C.A., offering both birds for sale at 80,000 Myanmar Kyat (around USD $48.55). B.A.N.C.A. turned the offer down and the hunter then killed the birds for food.

[Note: This story should be treated with caution because of B.A.N.C.A.’s refusal; Tony (the then-chairman of B.A.N.C.A.) was committed to Myanmar’s avifauna and a great believer in Pink-headed Duck survival. However, if telling the truth, U Ye Win remains the only person in contemporary times (as a speaking witness) to have observed two captive living Pink-headed Duck at close quarters. He stated that, although “not beautiful in books,” they “are beautiful.”]

Truth, Lies, or Somewhere in Between

At the south side of Naung Kwin we visited a fisherman’s hut and a local hunter’s hut on two consecutive days (both days in rain), going partway by elephant and then completing our journey on foot. We did not personally make contact with either on the first day (although Lay Win did visit the fisherman). The fisherman, U Meung Saw, offered little in the way of information. 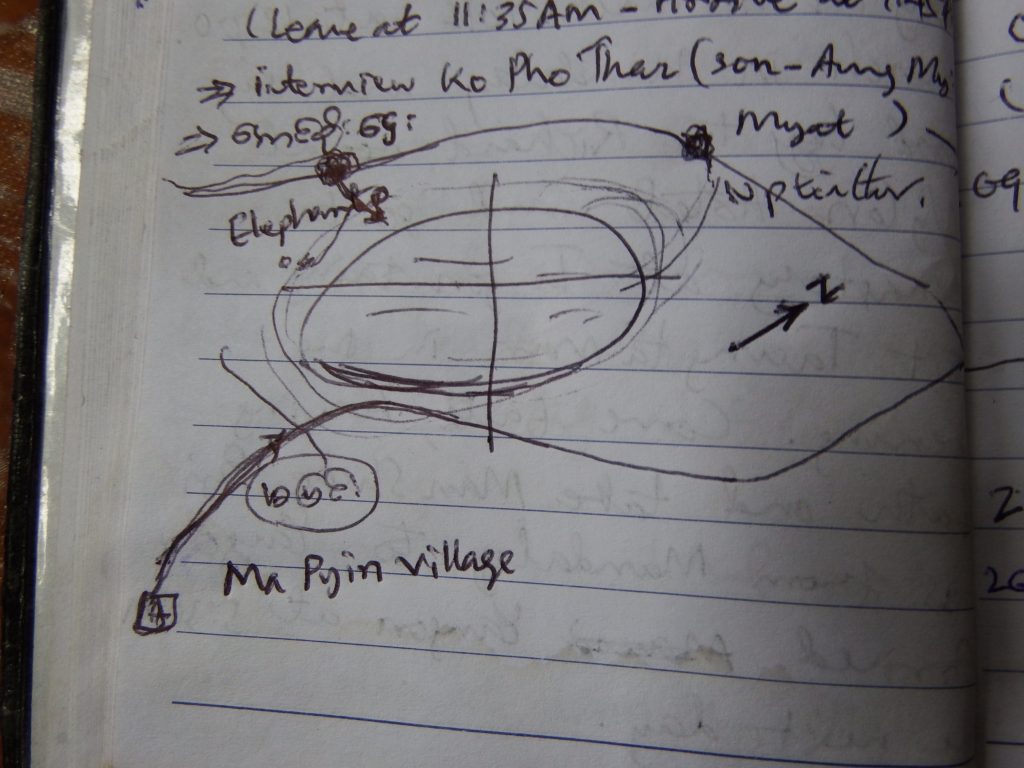 The local hunter, U Soe Win’s story was interesting, but seemed to us a bit convoluted. We thought this may have been financially induced, but Lay Win later explained that he was troubled by the fact that we were there in his hut, waiting for him; that he was in some kind of trouble. After U Soe Win relaxed more, we could decipher his (somewhat ambiguous) recollections:

The hunter had been living with his family in his bamboo hut for seven years and had passed trapped ducks for food — at one time the habitat was in good condition. He said that up until around three years ago, Pink-headed Ducks could still be found at Naung Kwin wetland, but now no longer. He described their calls in the night and said that there were still big, impassable ponds inside the wetland in the center and that only a drone could access such a habitat (this could be possible, but drone usage has been advised against in Kachin state). He said that the time to see them was in February. I believe his interpretation was unlike any known duck call, but any excitement at this news should be contained — the call could have been mammalian, for example. 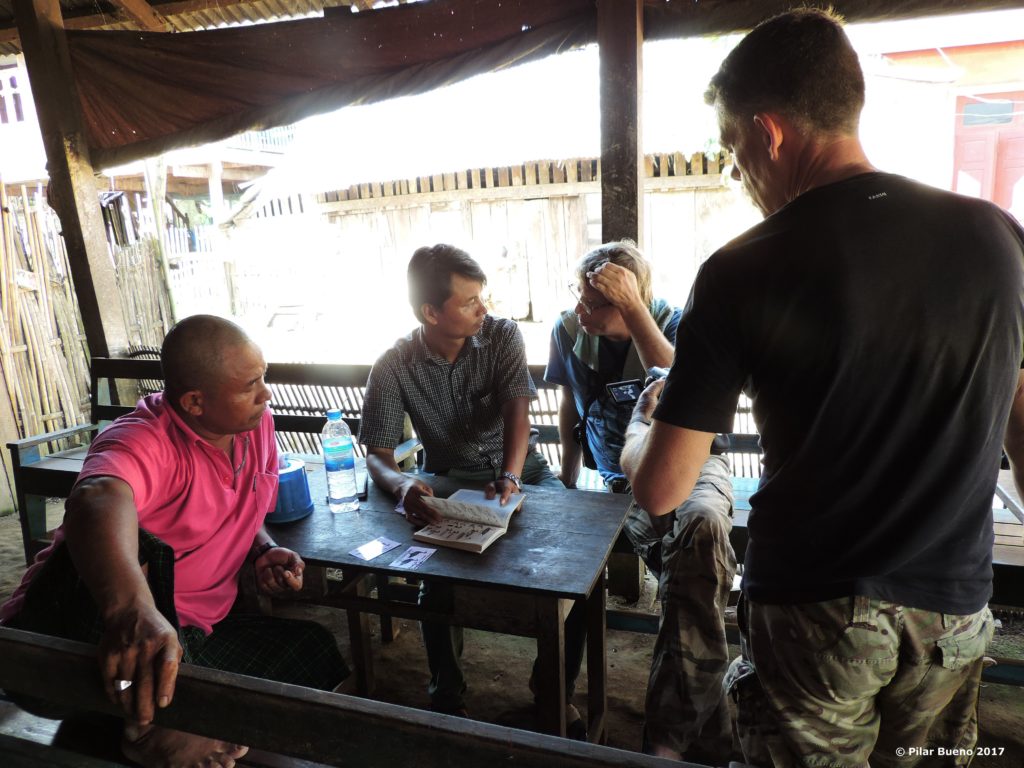 According to the hunter, three years previously somebody came to his hut and asked him to catch a Pink-headed Duck, but that they were difficult to catch in the wetland at night. He had seen a lot of ducks with green heads, pink heads and red heads. He had caught a lot of ducks to sell over the years, using high interceptor nets strung up between two bamboo poles, and he was sure that Pink-headed Ducks were amongst them. But this was (in contradiction) a long time ago; some 10 years ago.

In conclusion, we can see the Pink-headed Duck remains a true enigma in Myanmar: a temptingly closed country that may yet see the perception of its pristine habitat somewhat exaggerated. On this, on my seventh survey in that country, I conclude that the situation remains the same: misinterpretation (not to mention misidentification), ambiguity, and a lack of general knowledge all continue to plague efforts to locate the species. 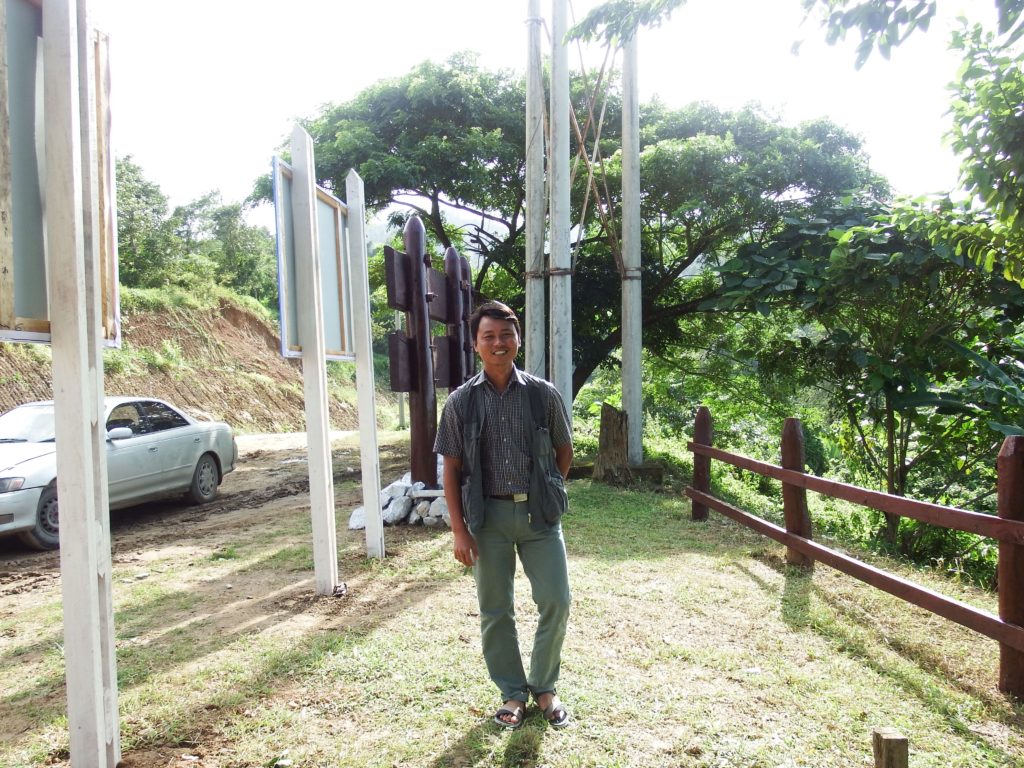 It could be that Pink-headed Ducks survived in Naung Kwin until comparatively recent times, as little as perhaps a decade or so ago, which gives some hope for the species and is rather better than what we know of as the last-known Pink-headed Duck in Myanmar (in the year 1910). Historical evidence will always be patchy and, although the collections in India from around 1875 to the last part of that century may seem recent, it is important to remember that this is contemporary with gaslight, hansom cabs and Jack the Ripper! That is how long ago we had evidence that the Pink-headed Duck was in the country of Myanmar.

Efforts should continue to look at alternative habitats and to extend the full weight of the newest-developing technology and science in order to exacerbate the search.