Salamanders Of The Cuchumatanes: Lost And Found

What follows is a firsthand account of a 2014 expedition in search of lost and rare salamanders in Guatemala’s Cuchumatane mountain range by GWC’s Conservation Officer, Robin Moore. 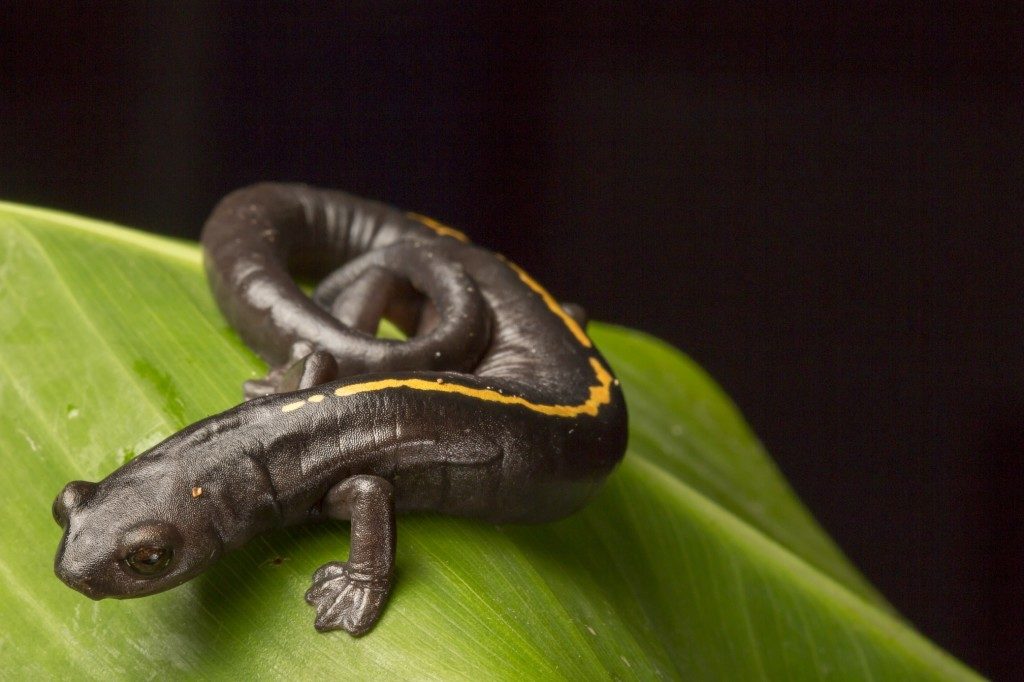 “We called it the golden wonder,” says Jeremy Jackson, reminiscing about a salamander that he was the first, and last, to find in the wild 38 years ago. Time has not dulled his memory: “I found the first one under a sheet of bark in a field and, after collecting in this field for weeks without success it was obviously something unusual. What the few photos of Bolitoglossa jacksoni [aka Jackson’s Climbing Salamander] that exist don’t show is the brilliance and depth of the coloration. It was an exceptionally beautiful animal.” 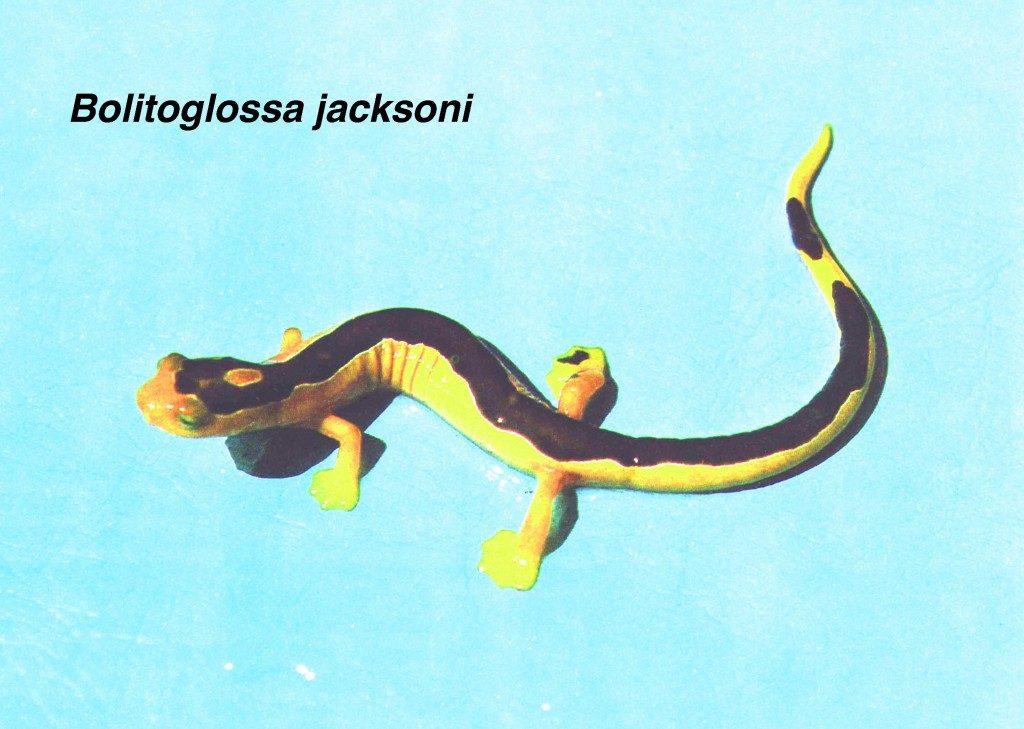 But what brought Jackson to the remote forests of Guatemala all those years ago? His good friend, Paul Elias. Elias had ventured to Guatemala for the first time in 1974–his findings had been so remarkable that he was compelled to return. Elias writes of that first visit: “I had just completed freshman year and was 18 years old. I had a chance to visit Guatemala because my mother was involved in a Harvard nutrition study there and offered to buy my ticket. I went to [eminent herpetologist] Dave Wake and asked what I could collect that would be of use to him. He gave me a one-page photocopy of a map of Guatemala and circled the Cuchumatanes.” 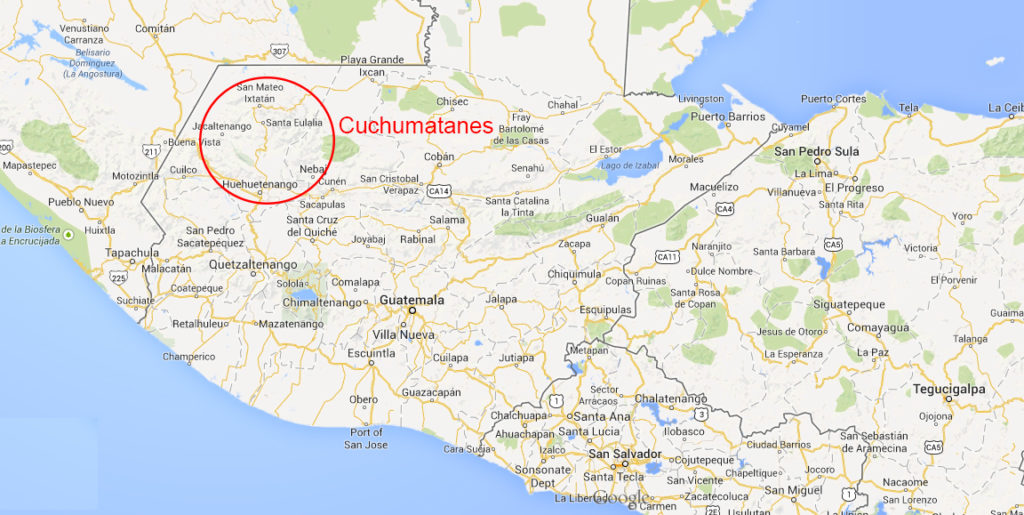 The Cuchumatanes mountains were, as far as Wake was concerned, a final frontier for exploration in Central America. After being dropped off by his parents at a road rising sharply up to a karst plateau, Elias hitchhiked as far as he could away from civilization and into uncharted territory, sleeping nights on a dirt floor among “bugs, predatory spiders, scorpions and centipedes that had gathered.” He collected a couple of hundred salamanders in three weeks. “I had no guide to the species in Guatemala so I had no idea if I had anything of value or not,” he says. 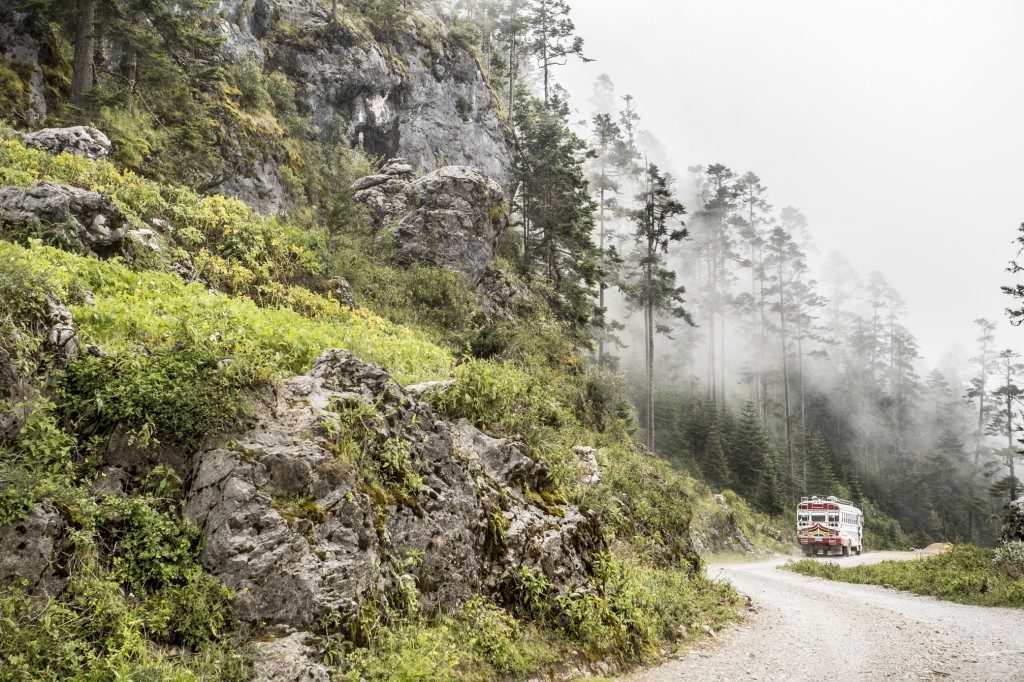 When Elias returned to Berkeley he left some of his specimens to soak in water before preserving them. Dave Wake happened to come across them, and he was astonished. Elias recalls: “Both Nyctanolis pernix and Bradytriton silus were in that collection and turned out to be new genera that were significant missing links in the Neotropical plethodontid [a group of lungless salamanders] radiation. Word traveled to me by rumor in the next day or two and I suddenly discovered that I had found something extraordinary. The rest is history.” 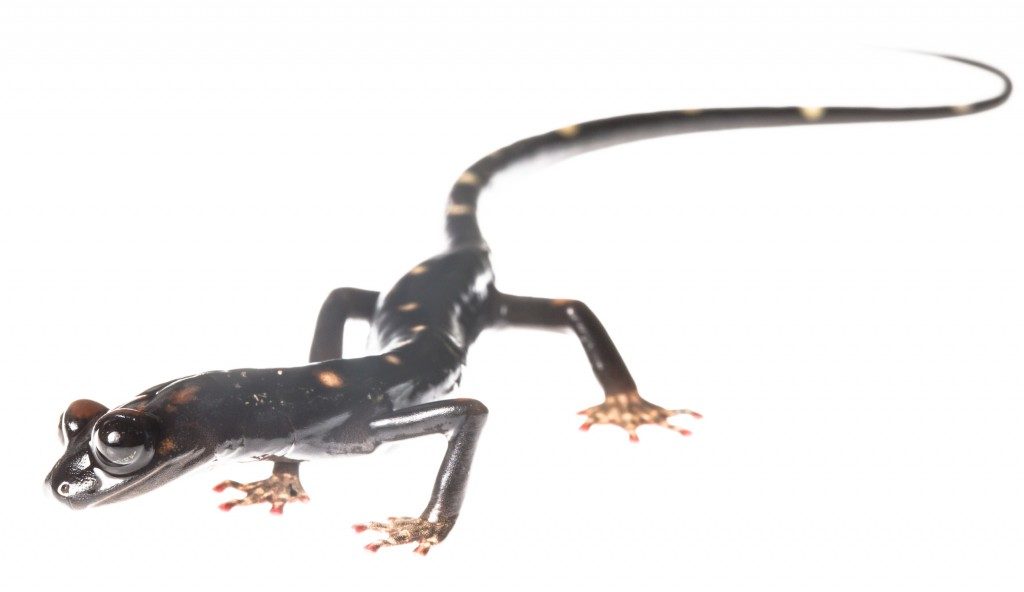 The long-limbed salamander, Nyctanolis pernix, one of two major species discoveries made by Paul Elias in his first expedition to Guatemala in 1974. (Photo by Robin Moore)

Elias returned to the Cuchumatanes the following two summers, bringing Jackson to help him. Rain-soaked weeks spent exploring forest and lifting logs resulted in the discovery of Bolitoglossa jacksoni, which was later named by Elias in honor of Jackson. But despite months of fieldwork, only two individuals of the species were ever found, and neither Elias or Jackson could have predicted that, a quarter of a century later, none of the three salamanders that they had discovered would have been seen again.

It was not until 2009, during an expedition led by the Museum of Vertebrate Zoology at Berkeley, that Bradytriton silus was rediscovered 32 years after it was last seen. The following year Nyctanolis pernix also re-appeared. Still missing, however, was Jackson’s salamander, which promptly climbed its way into the top ten “Most Wanted” amphibians in the world during the Search for Lost Frogs in 2010.

Bradytriton silus, unique in its high, vertically flattened tail, flattened nose and stumpy feet. was rediscovered after 32 years in 2009. (Photo by Robin Moore)

July 14, 2014. I am sitting with Jeremy Jackson and Paul Elias in a small rural village in the Cuchumatanes mountains. Elias is studying his original field notes – every page photocopied and bound, to compare how things are now to how they were then. It is the first time that either of them has been back in 38 years. We are joined by eight others, an eclectic mix that includes the inspirational local amphibian biologist and conservationist Carlos Vasquez, on a quest to retrace Elias and Jackson’s steps in search of some of the most elusive of creatures on earth.

It is our fifth day in Guatemala, and we have yet to find a salamander. Optimism is beginning to wane. As the light fades and heavy afternoon rain subsides, we don our headlamps and waterproofs and prepare to head into the forest. We target a patch with large buttressed trees–ideal for Nyctanolis. In the evening, the salamanders start to emerge from their daytime retreats among the tangle of roots to scale the trees, and so our hope is to find them as they emerge and before they climb out of reach.

Spirits are high, and it is not long before we strike gold. Jackson describes the moment: “When I spied that oh-so-familiar pose of a Nycatanolis basking in the rain with feet splayed and spine bent with that beautiful long tail hanging down, I was thrilled. It really brought back much of what it had been like in 76; going out night after night in the rain. Finding a Nycatanolisis was very rewarding just as it was years ago.”

The next day the team returns triumphant with a Bradytriton silus–the only one we will find on the expedition. Elias shares Jackson’s excitement at seeing the salamanders again, saying, “I was really moved to see both Nyctanolis and Bradytriton alive and happy in their forest. Nyctanolis in particular is just an extraordinary animal; its nimble ectomorph body with huge alert black eyes, its high speed agility, and its goofy polka dots make it something almost unlike a salamander. I never thought I would see one alive again, and I just could not get enough of watching them. The fact of these two missing links living in that primeval forest on the ancient karst uplands makes one think that the Cuchumatanes were the old cradle of the great salamander radiation of Central America.” 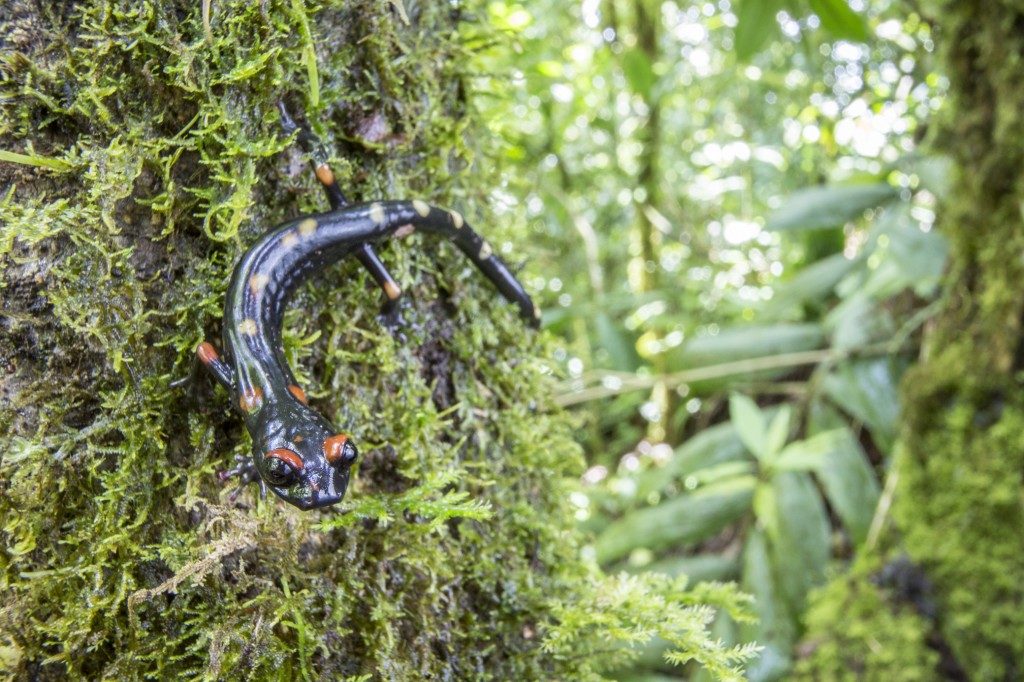 A long-limbed Salamander (Nyctanolis pernix) spotted by Jeremy Jackson 38 years after he last saw the species. (Photo by Robin Moore)

With two of our target species under the belt, our full attention turns to finding the Holy Grail: Bolitoglossa jacksoni.

Day after day we spend hours with our backs arched sifting through leaf litter, and under the cloak of darkness we enter the forest to illuminate leaves and mossy trunks with our headlamps, willing a brilliant yellow and chocolate brown salamander to appear in front of us. We talk about how amazing it would be to find a Jackson’s Salamander, and we even allow ourselves to imagine, with a jolt of adrenaline, the prospect.

But the vision remains tantalizing, as the elusive Jackson’s Climbing Salamander eludes us once more.

After a little more than a week in Guatemala it is time to start our journey home. But our salamander hunting is not over just yet. Before leaving the remote reaches of the Cuchumatanes we pay a return visit to a small village where one of the locals excitedly presents us with a salamander that they found close by. It is a beautiful Müller’s Mushroomtongue Salamander (Bolitoglossa mulleri), an uncommon chocolate brown animal with a splash of yellow running down its back, as if it had walked under a leaky tin of royal yellow paint. It is as close to Jackson’s Climbing Salamander as we will come.

Our final stop before leaving the Cuchumatanes is Puerta del Cielo–the appropriately named Gateway to Heaven–to scour mist-shrouded forest for the Royal False Brook Salamander (Pseudoeurycea rex). In the ethereal pine forests we find more than a dozen salamanders–it is a fitting end to our expedition. 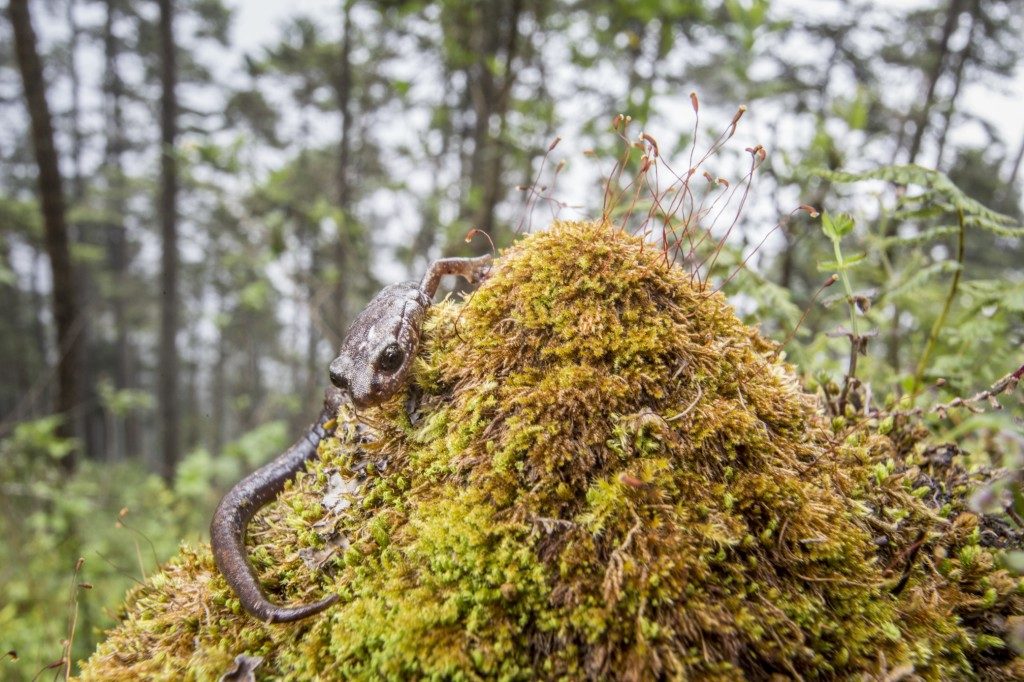 After 11 days of slashing rain-soaked forests in search of rare salamanders, the team parts ways in Guatemala City. Elias and Jackson return to Boston to resume their lives as a partner in a private investment firm and a woodworker respectively. While Elias remains actively involved in conservation as a trustee of The Nature Conservancy in Massachusetts, Jackson had not been in the field in almost four decades prior to our expedition. I am curious as to how people respond when they learn about his previous life as a field biologist.

“My having discovered a new salamander species rarely comes up in conversation,” he says. “But when it does, people are usually surprised if not just a little startled. One of my boys, when he was in fourth grade, told his class that I had a salamander named after me. They all thought I must be just like Indiana Jones.” He adds, “I’ve always felt honored by Paul’s naming it after me. It’s an unusual way to remember an exciting time of my life.”

On returning to the Cuchumatanes after 38 years, Jackson says: “I enjoyed remembering sights and smells and tastes from many years past. I had at least one goose bump moment. It was quite familiar and totally different at the same time.” Although he was disappointed that we did not find Jackson’s salamander, Jackson says he was buoyed by how many Nyctanolis we turned up, and is optimistic that something can be done to preserve the salamanders and their home.

“What is different now,” he says, “is the presence of Carlos Vasquez. I remember on my first visit seeing a man by the name of Mario Dari. He was president of the university down there, and we checked in with him out of respect. He was assassinated some time after that. There was no one like Carlos, and there were no groups [such as local NGO FUNDAECO] that could safely pursue the kinds of programs that are now in existence. There were Maryknoll priests, but even they got bumped off. Carlos is a very charismatic, intelligent, genuinely nice guy who is exactly the kind of person needed to push in all directions for the betterment of the natural resources in Guatemala.” 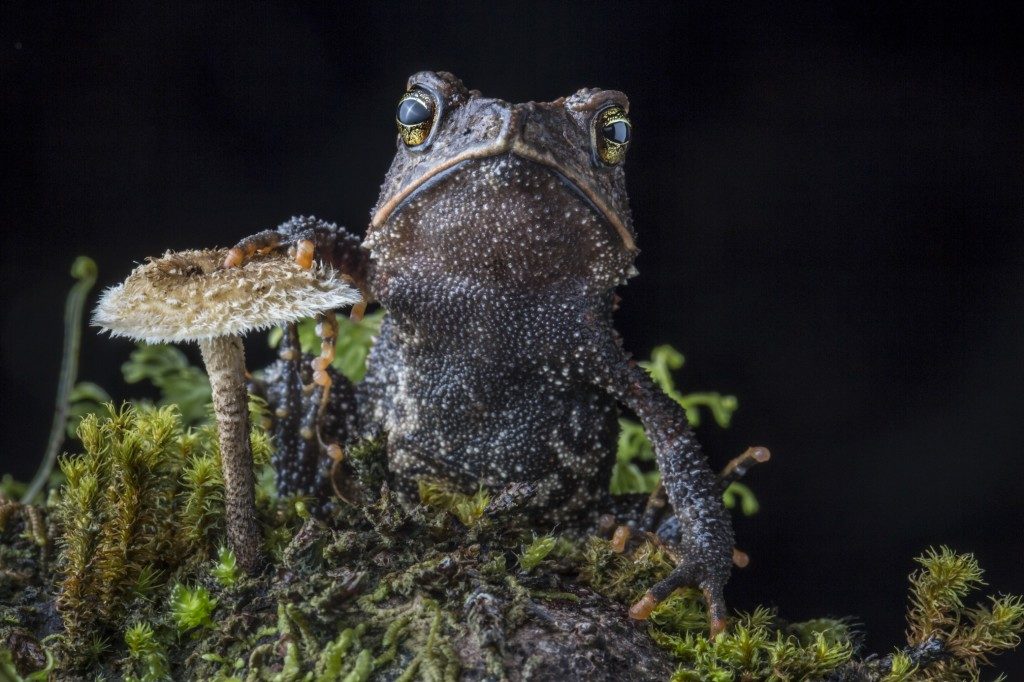 The Cuchumatan Golden Toad (Incilius aurarius), a species discovered and described as recently as 2012. (Photo by Robin Moore)

Elias too was thrilled to have had the opportunity to return to Guatemala with his old friend, something he never thought he would do. “I was delighted to see Jeremy treated as a mythic figure at the Natural History Museum, as he posed in front of posters of Bolitoglossa jacksoni,” he says. “He deserved to come back to experience that, to see the animals once more, and to close a loop that had been open since his youth.” 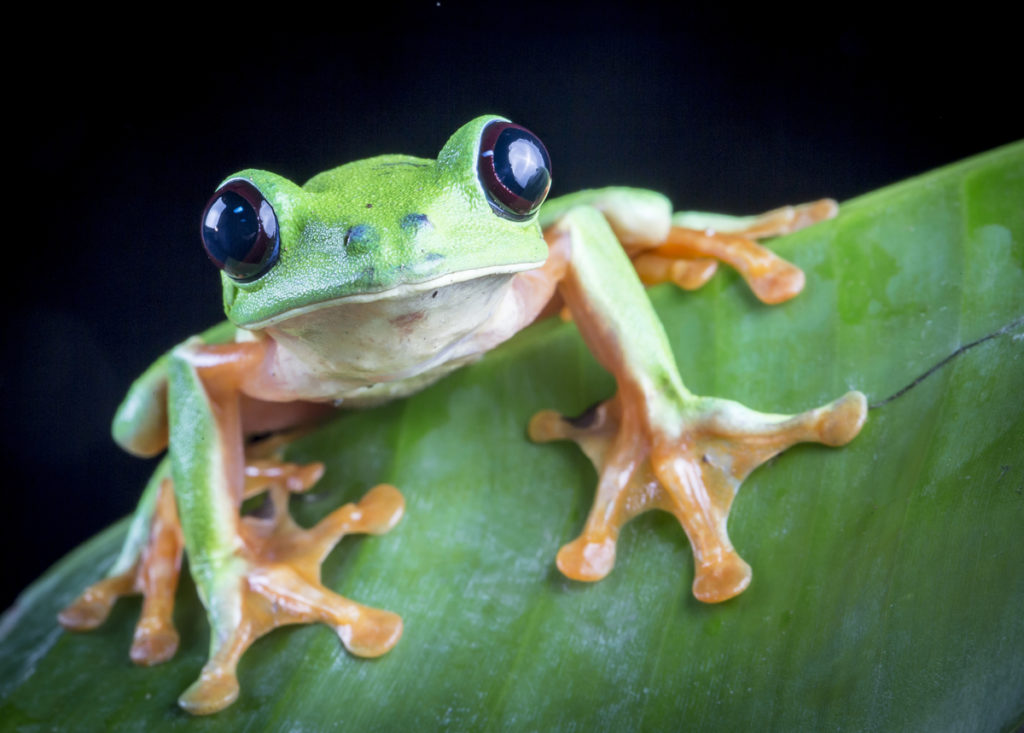