Now that Prince Harry and Meghan Markle have given us a glimpse of baby Archie, the celebrity “bump watch” spotlight is back on everyone’s fairytale frog couple: Romeo and Juliet.

The two Sehuencas Water Frogs started their whirlwind romance in March, moving into the same tank within days of their first date. The quick courtship is understandable given Romeo spent more than a decade as “the world’s loneliest frog.” His matchmakers (the herpetologists at the K’ayra Center at the Museo de Historia Natural Alcide d’Orbigny) feared there were no other Sehuencas Water Frogs left in the Bolivian cloud forest, as none had been spotted since Romeo’s discovery in 2009. So when they finally found his Juliet in a remote stream, the pair wasted no time getting to know one another romantically. 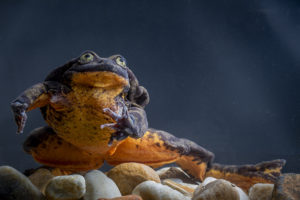 While there are no tadpoles to announce yet, the museum’s research team is learning more about Romeo and Juliet’s mating behaviors and is fine-tuning the couple’s living quarters to suit their preferences. The team is also working with local stakeholders toward its ultimate goal: to create a comprehensive, long-term conservation program to protect the cloud forest’s water frog habitats.

The museum team recently met with leaders of Carrasco National Park to learn more about their needs and potential strategies for bringing the park, community and researchers together to protect wildlife habitats. The team also met with leaders of the surrounding communities to update them on the captive breeding project, answer questions and learn about their goals. There are 240 rural communities within the national park, so a sustainable conservation program will need to balance the economic needs of residents with the environmental needs of the Sehuencas Water Frogs and other water frog species.

The team also held its first educational experience at the community school, which serves all area children from kindergarten through high school. Teresa Camacho Badani, chief of herpetology at the Museo de Historia Natural Alcide d’Orbigny, taught the students about amphibians’ important role in local ecosystems and showed them pictures of the world’s largest and smallest frogs. She shared Romeo and Juliet’s love story, played videos of their first date and gave the students stickers of the famous frogs. 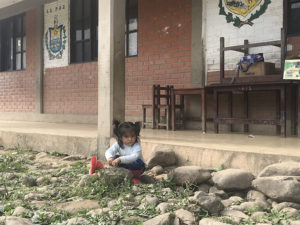 A visit to a community school in Bolivia in June to talk about Romeo the Frog and conservation in the park. (Photo by Chris Jordan, Global Wildlife Conservation)

The team also helped dispel some of the students’ fears and myths about frogs, such as the belief that their urine or saliva will burn you. Camacho Badani laughs, “If that were true, we’d all be burned up!” And the researchers explained that Romeo’s orange belly doesn’t mean he’s poisonous—it’s just part of his sex appeal.

Their first lesson had an immediate payoff.

“As we were driving off, we saw a girl running behind our car. The children had found a toad in the school garden and they didn’t want us to leave without seeing it,” says Ricardo Zurita, veterinarian at the K’ayra Center at the Museo de Historia Natural Alcide d’Orbigny. 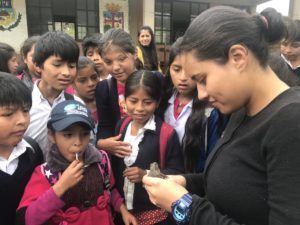 The toad was a Quechua Toad (Rhinella quechua), a threatened species that shares streams with Sehuencas Water Frogs. The Quecha Toad was the first Bolivian species to succumb to chytrid, a deadly fungus that has devastated amphibian populations worldwide. After the students gently held the toad, the team released it on the banks of a nearby river.

“These students are the future decision-makers about the cloud forest,” says Christopher Jordan, Global Wildlife Conservation’s Central America and Tropical Andes coordinator, who was at the school and community outreach events. “Showing them how Romeo and Juliet’s story has traveled around the world allows us to emphasize that the forests and wildlife around them are unique and of global importance and hopefully instill a stronger sense of pride in their community and its surrounding ecosystems.” 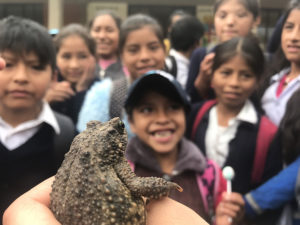 Romeo and Juliet’s story has been covered by hundreds of media outlets including the BBC, CNN, the New York Times and all the major papers in Bolivia. The president of Bolivia, Evo Morales, even tweeted about the frogs. And in April, the city of Cochabamba recognized Camacho Badani for her contributions to animal research.

“People recognize Teresa in the streets,” Jordan says. “When we go to meet with leaders and national park staff, they already know about Romeo. It’s a great platform for having important conversations about how we can bring the park and community together to protect the frogs’ habitat in perpetuity.”

Building on that momentum, GWC and the museum has procured a shipping container that they will transform into a new home for the Sehuencas Water Frogs and other water frogs from the captive breeding program. The team will line the container’s walls with aquariums and install filtration systems that replicate the frogs’ preferred conditions—they’ve usually been found close to waterfalls, buried under rocks. 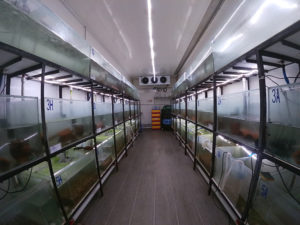 The inside of a shipping container turned rescue pod. (Photo courtesy of the Museo de Historia Natural Alcide d’Orbigny)

“Getting the water temperature and quality right for the frogs will be one of the biggest challenges, especially in Cochabamba’s humid climate,” says Sophia Barrón, head of conservation breeding for the K’ayra Center at the Museo de Historia Natural Alcide d’Orbigny. “It will require heavy-duty refrigeration and a month-long process of adding carbonates and bacteria to the water.”

The container will also be biosecure, with a sealed entry room where researchers can change from their street clothes into overalls, boots and gloves before going into the frogs’ habitat. They even change their gloves before reaching from one tank into another to avoid cross-contamination.

The new home will enable Romeo and Juliet to move into their own tank – right now they’re bunking with Titicaca Water Frogs and three other threatened water frogs from Bolivia. Hopefully having their own private rapids will amplify their romantic mood. Until then, practice makes perfect.