For Colombian conservation biologist Sergio Balaguera-Reina, very few experiences are as beautiful as seeing baby crocodylians hatching, stretching their tiny legs and pushing their way mightily into the world. This is especially true when those babies belong to a subspecies that had largely been lost to the scientific community since its discovery in 1952. That is until December of 2018, when Balaguera-Reina, with the help of local indigenous people, went on a grueling expedition to the remote wilds of southern Colombia in a successful search for the Apaporis Caiman (Caiman crocodilus apaporiensis).

“I’ve seen the preserved caiman that originally led to the subspecies’ discovery and description, but nothing prepared me to see the caiman alive in the wild,” Balaguera-Reina says. “And then to be there during nesting season and to see this reptile hatch just a few months later was a really special experience.” 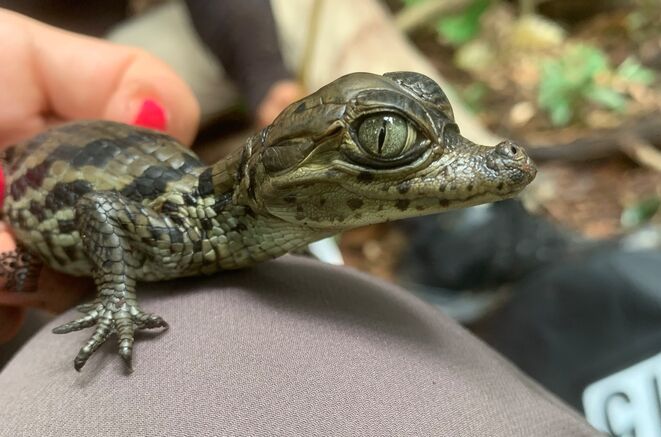 Apaporis Caiman (Caiman crocodilus apaporiensis) has largely been lost to the scientific community since its discovery in 1952. (Photo courtesy of Lorena Carvajal-Bonilla)

His April trip during nesting season was one of three trips Balaguera-Reina has taken since the rediscovery to the Apaporis River—a 700-mile river that stretches from central Colombia to the Brazilian border—to continue his research on how many individual Apaporis Caiman there are, how many populations exist, where they live, their conservation status and how they are genetically related to the three other subspecies of Spectacled Caiman. These are the very questions that prompted Balaguera-Reina, who is the IUCN SSC’s Crocodile Specialist Group regional vice chair for Latin America and Caribbean, to look for the crocodile with the help of members of the indigenous community there. After working on a Red List of Threatened Species assessment for crocodylians, Balaguera-Reina says it became clear that there was very little information available about this subspecies.

Balaguera-Reina this month published his findings in the Journal of Herpetology. And while the rediscovery is certainly exciting, it isn’t surprising, Balaguera-Reina says.

“We never thought that this caiman was extinct,” Balaguera-Reina says. “But the political situation in Colombia prevented biologists from safely accessing the animal’s habitat to confirm that it’s still there. What did surprise me is what we found in the course of this research: even though the Apaporis Caiman is isolated and physically very different from other subspecies of the Spectacled Caiman, it is genetically highly similar to another subspecies, Caiman crocodilus crocodilus. I did not expect that at all.”

An Odd-looking Caiman From the Middle of Nowhere

When the tiny airplane started its descent into the thick jungles of southern Colombia on Balaguera-Reina’s first trip to the Apaporis River basin, the first thing that he noticed was that there was nothing but a small patch of earth to land on. This was not a well-trodden place, but instead once the stomping ground of FARC, the country’s largest rebel group. Their presence deterred farming, development and any sort of on-the-ground research that biologists hoped to conduct. In 2016, the Colombian government signed a peace treaty with FARC, marking the first step toward ending 50 years of conflict. As FARC has moved out of the forests in recent years, scientists have had a chance to become reacquainted with the country’s rich biodiversity.

Prime Apaporis Caiman habitat on the Apaporis River, which stretches from central Colombia to the Brazilian border. (Photo courtesy of Sergio Balaguera-Reina)

“If we didn’t get the peace agreement, I wouldn’t have been able to go into this area to make this rediscovery,” Balaguera-Reina says. “The agreement created a change in the atmosphere in Colombia. It marked a better future for the people of Colombia—not just for the scientists who can now do studies of Colombia’s biodiversity, but for the indigenous peoples who were physically in the middle of the conflict and play a critical role in safeguarding these ecosystems.”

These same indigenous people greeted Balaguera-Reina after the pilot dropped him off, alone, wondering whether the pilot would actually come back to pick him up in a week or if he was now stuck in caiman habitat forever (which, given his passion for crocodiles, didn’t necessarily seem the worst outcome). In the following days of the eight-day expedition, Balaguera-Reina conducted interviews with 11 indigenous people from La Victoria community from various tribes—Barasano, Cubeo, Tatuyo, Carapana, Cabiyari, Yacuna, Carijonas and Tucanos—to find out if they had seen the Apaporis Caiman, their beliefs about the animal, and the threats to the subspecies.

“Colombia has a treasure trove of biodiversity that conservationists are only just starting to get a handle on in the years since the peace treaty,” said Lina Valencia, GWC’s Colombia conservation officer. “This story, like that of the Starry Night Harlequin Toad, underscores the tremendous knowledge of indigenous communities and how vital it is to partner with them to increase our understanding of the natural world and how best to protect it.” 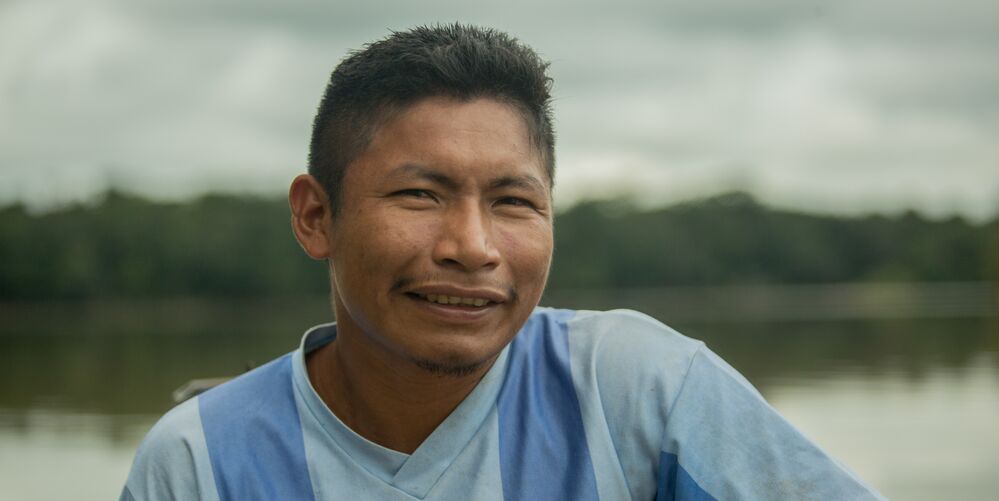 Alfredo Vargas-Carapana, a member of the local indigenous community, has helped collect information about the Apapopis Caiman for Balaguera-Reina's research. (Photo courtesy of Sergio Balaguera-Reina)

At night Balaguera-Reina retraced Medem’s steps (or paddles) along the middle section of the Apaporis River. Traveling in a handcrafted canoe powered by two individuals from the local community in charge of paddling, Balaguera-Reina would shine a bright headlamp into the water in hopes of catching a flash of the telltale eye shine. On this original trip, he detected 105 individual caiman in five different areas, catching those that he could to take measurements of their length and collect DNA samples, and then releasing them.

It is through these DNA samples that Balaguera-Reina discovered that the DNA for this caiman is highly similar to that of one of the other subspecies.

“This subspecies gets so much attention because it is isolated and looks so different,” Balaguera-Reina says. “It has a pointy, narrow nose and copper-color teeth. So something is going on here to make them so different in shape, even though they are so similar genetically. For some reason the environment is selecting for a narrow-nosed animal. We’re working now on solving that mystery.”

In addition to significantly advancing our understanding of the genetic family tree of this group of caiman subspecies, Balaguera-Reina is also drawing on his research to do a population analysis of the Apaporis Caiman, to better understand the hunting pressures on the animal and to determine its conservation status. Even when he’s not in the field, he’s still collecting data—he trained and hired a member of the Carapana tribe, Alfredo Vargas-Carapana, to make observations in his stead. 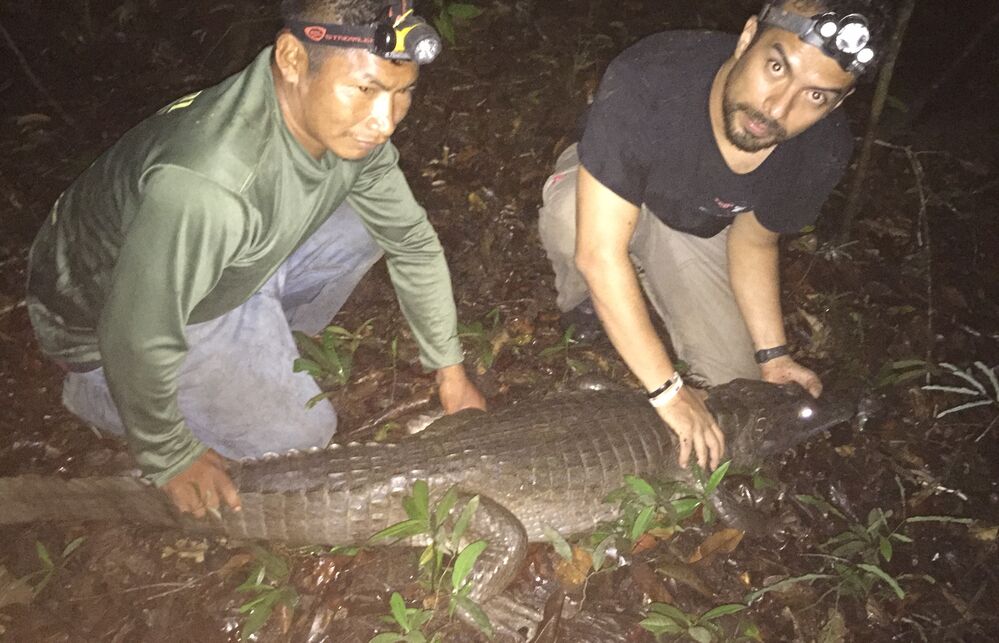 “We need to continue doing all of these studies because the only way to protect biodiversity is to use that information to guide both the policies our governments create and the way that we all live,” Balaguera-Reina says. “And then we need to continue to partner closely with the indigenous people—who have all the knowledge—to make sure that any conservation measures we hope to take are done hand in hand with them.”

Ultimately Balaguera-Reina wants to help create a conservation and management plan for crocodylians across the country, which is home to two crocodile and four caiman species. And thread through all of Balaguera-Reina’s work is his commitment to essentially re-branding crocodylian species, who are often villainized as maneaters, by sharing both his passion and the stories that make crocodylians so fascinating, such as that of the peculiar-looking Apaporis Caiman.

“Crocodiles are extraordinarily interesting, but so underestimated,” he says. “People see them just as these dangerous animals in the wild, when really they’re so much more complex, with their own social hierarchies and fascinating behavior. We need to find a way to coexist with these animals, even those that live in remote places. They are important in the ecosystem, and we are a part of that ecosystem, even if we live in cities and feel far away from nature.”

Editor’s Note: Earlier this month GWC incorrectly reported about Animal Planet’s Extinct or Alive episode about the rediscovery of the Apaporis Caiman, attributing it to a different wildlife biologist. Information has since come to light confirming that Balaguera-Reina has the rightful claim on this rediscovery--he publicly announced the finding in December of 2018 and has returned to document the caiman multiple times over the last year.