Rediscovery in a Glint of Blue

By Global Wildlife Conservation on December 14, 2017

The Malaysian primeval rainforest is the most beautiful place on Earth. Once I entered it, I knew I had to come back. And I have been coming back — for the last six years.

It’s a hot humid morning in one of the world’s oldest rainforests — the 130-milion-year-old Taman Negara jungle. I pull yet another leech off my leg and continue the hike. We are, nature filmmaker Paolo and I, following an abandoned trail, which is mostly used by elephants nowadays, to a unique location about a three-hour trek from the basecamp. We had found that spot a year before when looking for my first newly described species of clearwing moth, Heterosphecia pahangensis. 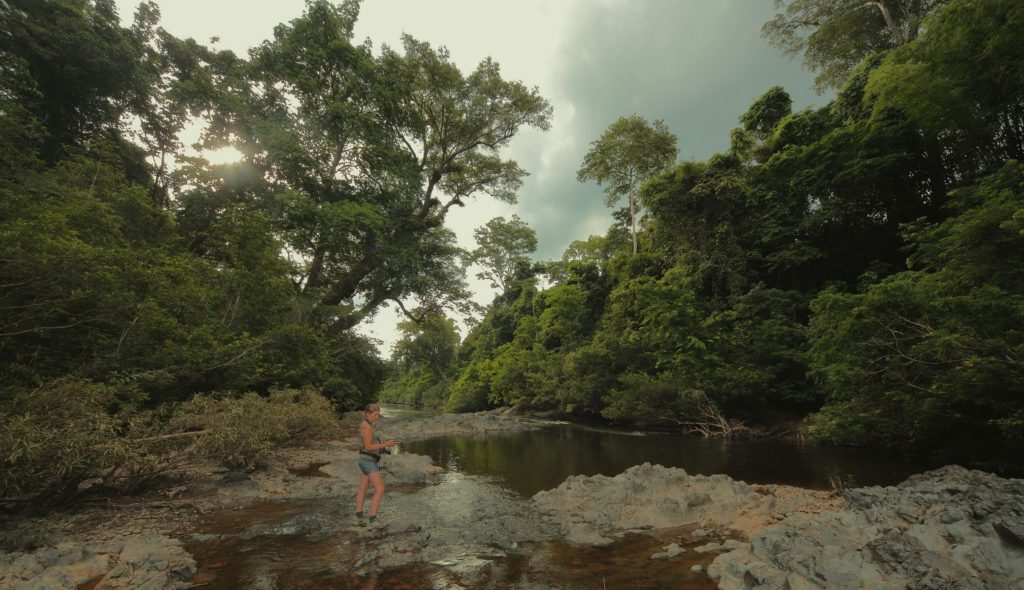 Searching for clearwing moths on the riverbank. (Photo by Paolo Volponi)

Clearwing moths (Sesiidae) are a family of day-flying Lepidoptera known for their resemblance to bees and wasps. They are a classic example of so-called Batesian mimicry, which occurs when a harmless species imitates one that has active defense mechanisms, such as stinging or biting. Sesiidae are very elusive insects, especially in the tropics: they’re difficult to locate and usually stay at the same spot only for several minutes. That is why entomologists mainly collect them with the use of synthetic pheromone traps: a method that kills the insects and thus provides information about their morphology only. I’m interested, however, in studying the behavior of sesiids in their native habitats. I have discovered that clearwing moths not only look like bees or wasps, but they also imitate their flight path! As part of my Ph.D. project I am comparing flight trajectories of sesiids and their bee and wasp models.

To do that, I had to film them in flight, which brings us back to the dense Malaysian jungle. After our exhausting hike, we are awarded with the most spectacular view: a crystal-clear river flowing calmly through the rainforest, with an abundance of insects and birds around it. The river bank is where clearwing moths come to mud-puddle. At least they had one year ago! We aren’t getting our hopes up just yet — they are very rare insects to observe in the wild. Having thought that, I look down and see…a strikingly blue clearwing moth! It’s not H. pahangensis, which we came here for, it must be something new: I haven’t seen anything like it before! I turn around to show it to Paolo, pulling out my camera at the same time, and when I turn back — it’s gone! I look around desperately hoping to see it once more but it’s nowhere to be found! I am convinced I have seen a very unique species (perhaps new to science?) and decide not to stop looking until I find it. 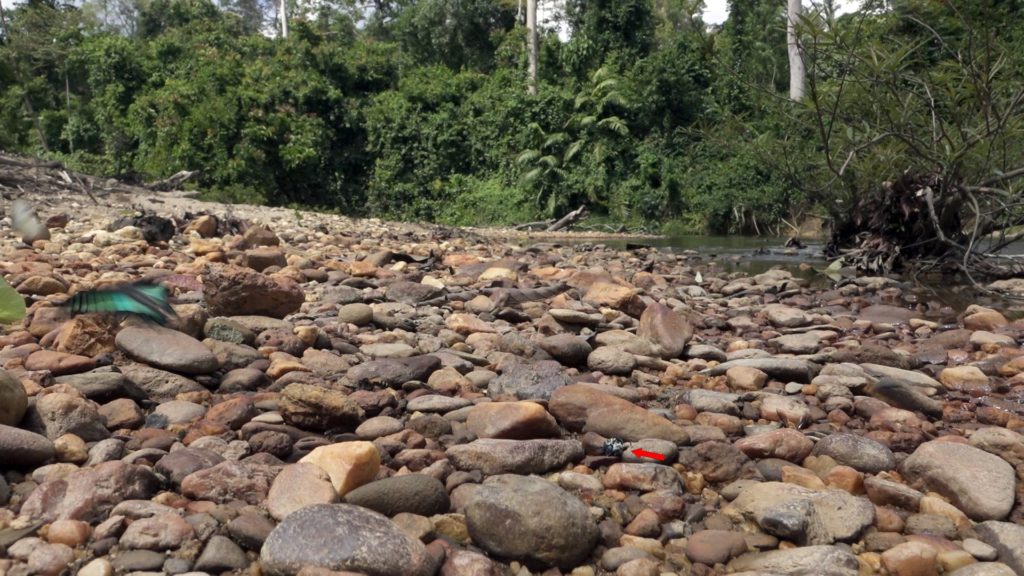 The natural habitat of the Oriental Blue Clearwing in Peninsular Malaysia. Arrow indicates a clearwing moth mud-puddling on rocks. (Photo by Paolo Volponi)

It’s more than 30 degrees Celsius in the shade and at least 40 degrees in the sun when we start patrolling the river bank, walking back and forth along the banks. After an hour or two, we are sweating so badly we’re risking dehydration. And then, just as I’m about to take a break and go cool myself down in the river, I see a flash of blue on the opposite bank. It lands on a rock, and that’s it, the strikingly colored clearwing moth I had seen before.

Excited, I try not to run through the river (luckily my camera is waterproof) because I would scare it away. I call Paolo and he comes running with his bigger camera and we both manage to carefully approach the insect and film it simultaneously. It was one of the most amazing moments of my life — there I was, in my dream study location, filming a fascinating and rarely seen insect.

Now I could see more details: transparent wings with a blue sheen in sunlight, hairy white and blue legs and a fully functional, long proboscis — a mouthpart characteristic of butterflies and moths, a feature that gives it away as not being a bee after all. In Southeast Asia, bees come in many colors — blue included — and this sesiid imitates them by having narrow, transparent wings, bright blue bands on the abdomen, elongated scales imitating the fur on bee legs and simple antennae. A predator will think twice before attempting to catch it — it’s not worth the risk of getting stung! The amazing mimicry displayed by clearwing moths is what I love about them most. It’s so good that it allows the sesiid to mud-puddle among bees and wasps, whereas all of the “normal” butterflies stay away!

The video we took was published in Tropical Conservation Science along with the article about the rediscovered species. After detailed morphological analyses, the Oriental Blue Clearwing, as I call it, turned out to be Heterosphecia tawonoides — a species known until now only from a single, more than 130-year-old specimen, the holotype, kept in a museum in Vienna.

We later found several more locations where the species occurs, including areas outside of the National Park. Sadly, directly outside protected areas, the rainforest is being extensively cut down. When monsoon rains come, mud and pollution slides down directly into the river that is the border of the park. When the water level rises drastically, sandy river banks disappear — and along with them so do clearwing moths, bees, wasps and butterflies. The rediscovered species is a beautiful species, yet just one example of Southeast Asia’s rainforest inhabitants. Others include the Malayan Tiger, Leopards, Asian Elephants, Sun Bears, tapirs or hornbills, to name just a few. It is very important to protect not just single species, but entire ecosystems. 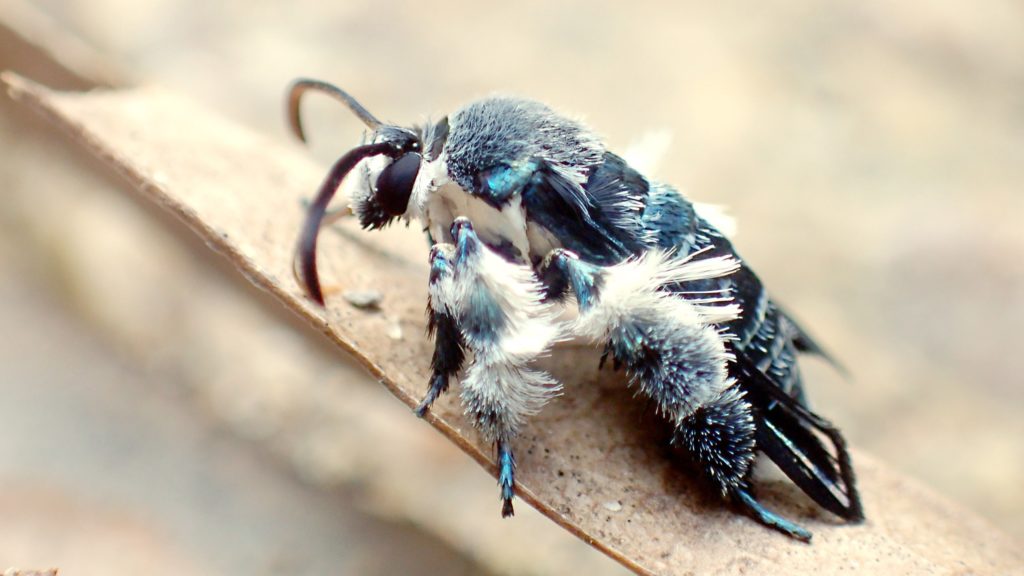 All over the globe, it seems that only patches of protected rainforests will remain and everything else will be cut down. We are losing biodiversity faster than scientists can describe it. It is important that we are all aware of the value of these vanishing rainforests, which are not only a wildlife refuge, but also a water reservoir and protection against flooding for local villages, in addition to the fact that they provide oxygen that we all breathe in. We would like to highlight the problem Malaysian forests face to the country’s government and suggest establishing a buffer zone around Taman Negara, where trees wouldn’t be cut down. We think the first step in conservation is education, so we have established the ClearWing Foundation for Biodiversity, which aims to spread awareness of the need to protect nature, as well as support research and nature filmmaking.