I first heard the name Alfred Russel Wallace sometime in the early 2000s in an essay by science writer David Quammen. Prior to that, as with so many people, I had never heard of this scruffy, determined insect collector who also happened to co-develop the theory of evolution with Charles Darwin. As Anthony Kuhn put it on NPR’s Morning Edition: “He helped discover evolution, and then became extinct.” 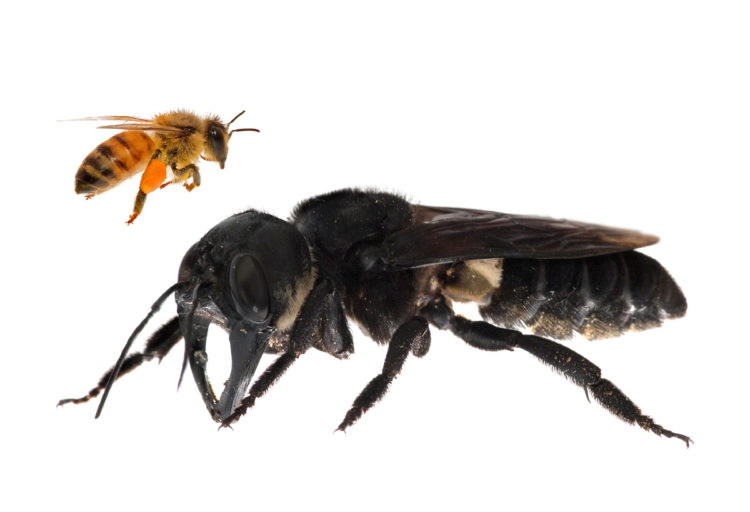 One of the first images of a living Wallace’s giant bee. Megachile pluto is the world’s largest bee, which is approximately 4x times larger than a European honey bee. (Composite). Photo by Clay Bolt.

What I couldn’t know then was that that essay would be the life-changing catalyst for my ongoing love affair with a species Wallace so casually wrote about discovering in 1858, Megachile pluto, the world’s largest bee. Nor could I know that nearly two decades later, in a true homage to Wallace, I would find myself halfway around the world on a little-explored Indonesian island taking the first-ever photo of the incredible bee alive in the wild, lost to science since 1981.

After learning of Wallace’s exploits, I picked up a used copy of his journals, The Malay Archipelago, which details the naturalist’s travels through places that were vastly unexplored by Westerners in the late 1800s, including Malaysia, New Guinea, and Indonesia. Of Wallace’s many incredible accounts that captured my imagination, one in particular stayed with me above all others: the mysterious discovery in 1858 of Megachile pluto, which is commonly known today as Wallace’s Giant Bee. 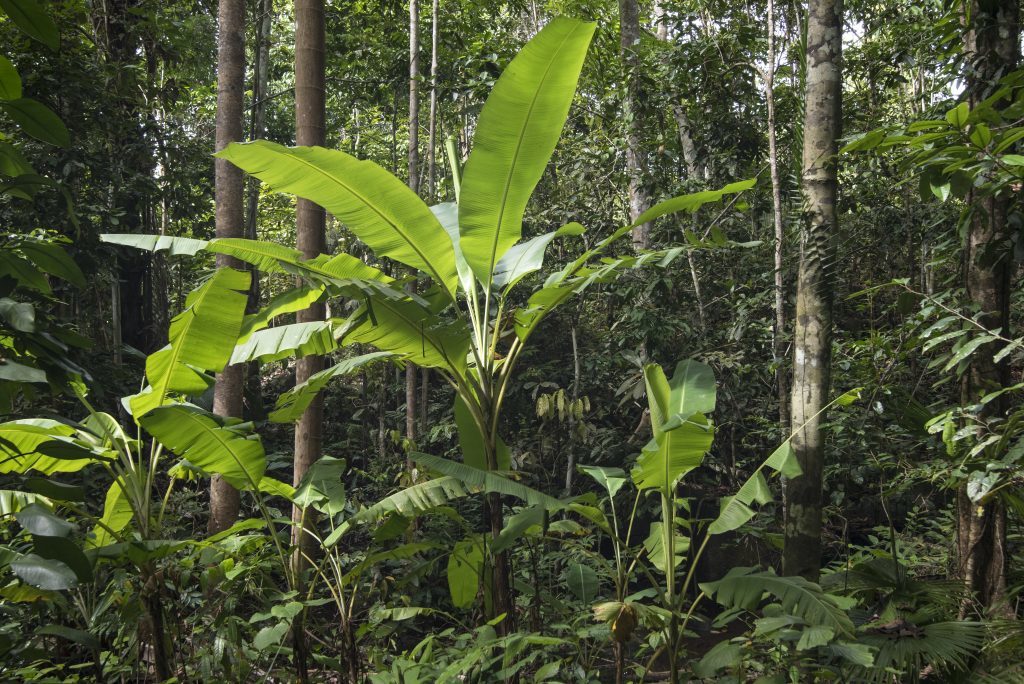 The Wallace’s giant bee rediscovery team searched many patches of remaining lowland forest in the North Moluccas for the elusive insect.

In his records, Wallace spends little time on the bee—one of 1,000 new species he had also discovered. But he described the female that a local brought to him as, “…about as long as an adult human’s thumb,” and as “a large black wasp-like insect, with immense jaws like a stag-beetle.” To see such a thing with my own eyes, alive or otherwise, at the time seemed impossible, the distance between my then-home in South Carolina and Indonesia insurmountable.

In 2015, I visited entomologist Eli Wyman at the American Museum of Natural History, as part of an ambitious project documenting North America’s underappreciated native bee species. Eli was kind of enough to show me around. As we looked through drawers of pinned bee specimens from around the world, I drooled over the beautiful array of species. Just before I left, Eli said with a sly grin, “want to see a specimen of Megachile pluto?” I couldn’t believe my ears, and seconds later, I was literally inches away from one of the rarest and most sought-after insects in the world. 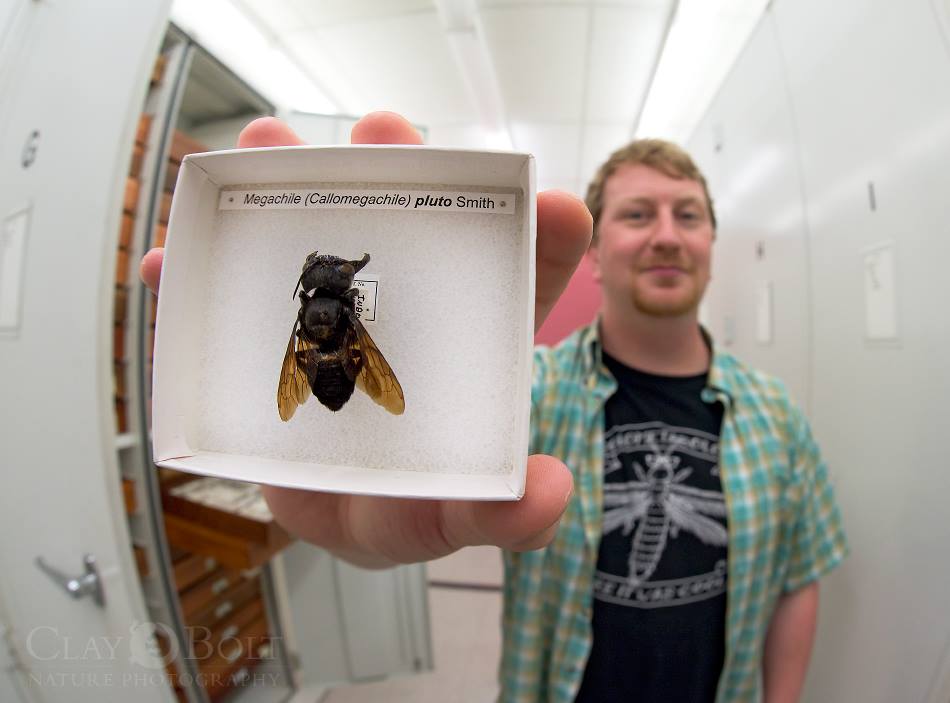 It was more magnificent than I could have imagined, even in death. Eli shared with me that it had been his dream to try to find the bee in the wild for years and before long the two of us began a lengthy dialogue discussing possibilities, following clues, nearly giving up; ultimately a path to follow in the footsteps of Wallace himself and search for the bee in the Indonesian islands known as the North Moluccas. When we heard that GWC was calling for nominations for their Search for Lost Species program, we convinced them to include Wallace’s Giant Bee on their top 25 “most wanted list.” We were one step closer to fulfilling our dream.

In October of 2018 Eli was contacted by Canadian-born writer Glen Chilton about a trip that he and colleague Simon Robson (of James Cook University, Queensland, Australia) were putting together to search for Wallace’s Giant Bee and other species Wallace had described. After much planning and deliberating, the four of us booked tickets in December for a trip to Indonesia in late January of 2019, around the same time of year that both Wallace and researcher Adam Messer (who was the last to see the bee in 1981), encountered the bee.

Buzzing Back Into View

After traveling for nearly 24 hours, Eli and I arrived exhausted (and rather sweaty) in Ternate, where we met up with Glen and Simon, in addition to our incredible Indonesian guides, Iswan and Eka, who are both passionate conservationists in their own rights. They helped us arrange transport during our trip, and Iswan not only proved to have a very sharp set of eyes and a passion for insects, but also to be a wonderful travel companion. 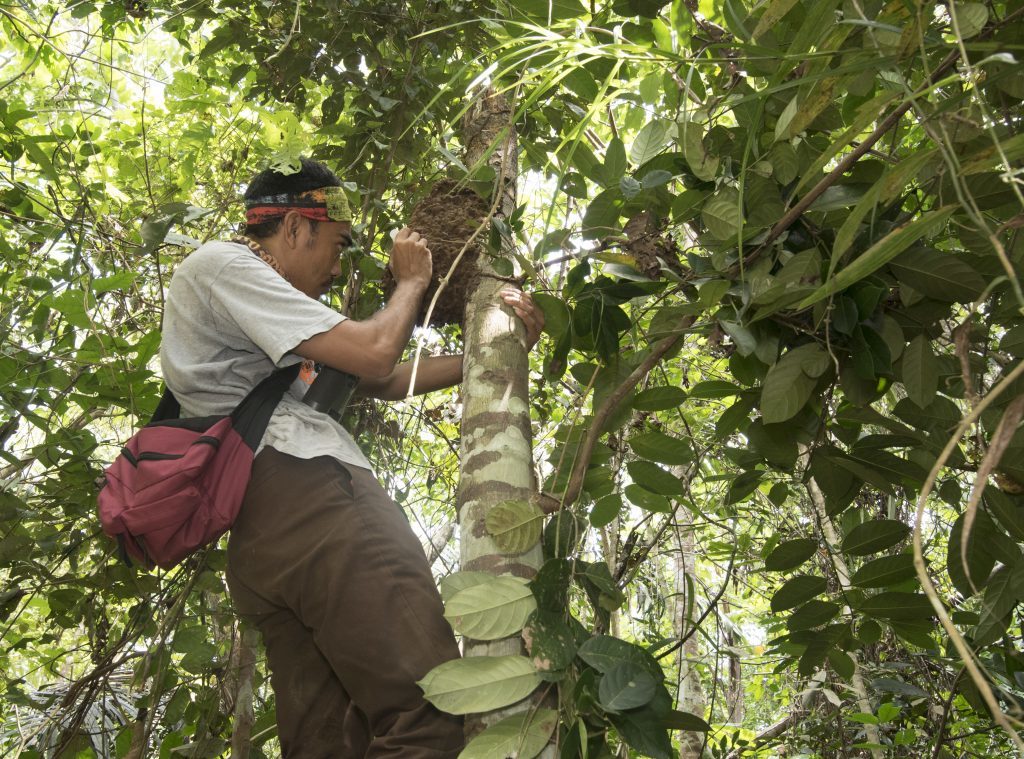 Iswan examines an arboreal termite mound containing the first rediscovered Wallace’s giant bee and her nest. Photo by Clay Bolt. (Last name redacted to protect the privacy of the guide and the bee’s known location).

On the official day when our search began, the Indonesian heat was oppressive, even for someone used to tropical habitats, but before long we found ourselves happily traveling across ocean and land into areas that were more and more remote. Wallace’s Giant Bee is known to nest in active, tree-dwelling termite mounds, so we knew that forests would be our primary targets.

As we walked into the dense forests for the first time, rich with the scent of clove and nutmeg hanging densely in the air, I had a hard time believing that I was actually following in Wallace’s footsteps, in an area that at times seemed little changed from his travels not much more than 150 years in the past. Eli and I were excited to see a few different Megachile species, and several large bees or wasps flying past well out of reach in the canopy. We also observed many other unusual species, including Simon’s beloved Polyrachis ants, jumping spiders with extended mandibles, and gorgeous jewel beetles. 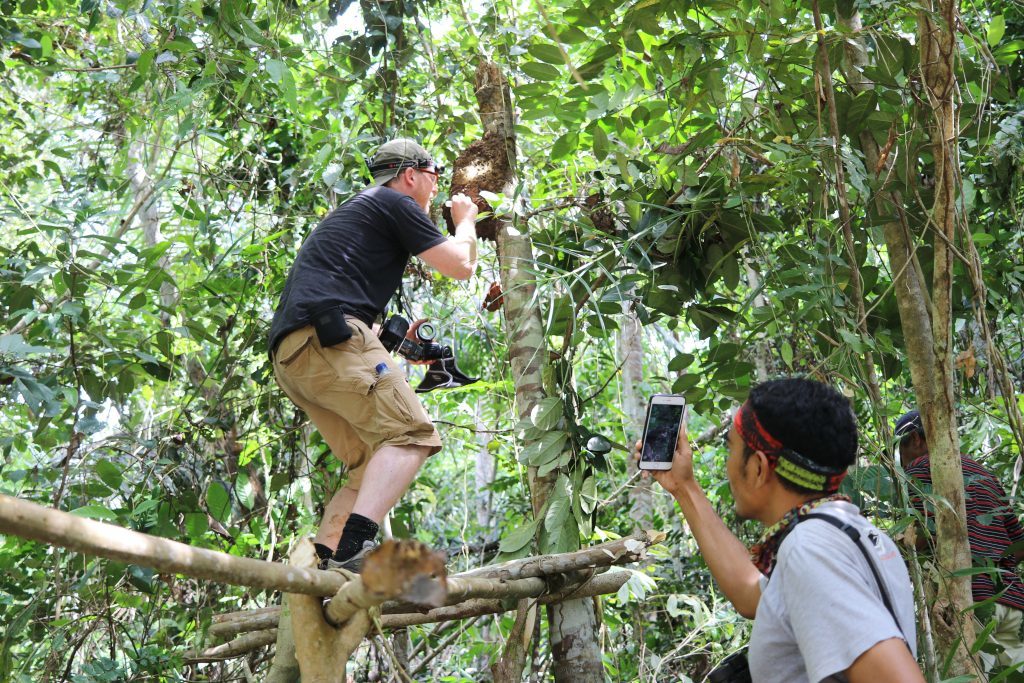 Each day, Eli, Simon, Iswan, and I, along with local village guides, stared at termite mounds for 20 minutes at a time, then moved on to the next mound. It was invigorating but tiring work. Sometimes we were certain that large beetles must surely be the bee, other times, we would stare for ages at termite mounds only to move on disappointed with a growing sense that we’d never discover the creature of our obsession. As each day went by, we were less and less sure it would happen.

By the last day of searching, we were all dealing with various maladies, including Glen, who had made the difficult decision to return home to Australia after coming down with heat-induced illness. That day we walked down an old orchard road flanked on both sides by mixed lowland forest and fruit trees. Iswan, ever the eagle eye, spotted a low termite mound, around eight feet from the ground. He later recounted that he almost didn’t mention it to us because, like the rest of the team, he was feeling tired and hungry. However, I’ll forever be grateful that he did because as we scampered up an embankment to the nest, we immediately noticed that it had a hole in it, like many other nests we’d seen, but this one was a little more perfect. It was very round, and just the size that a giant bee might use. 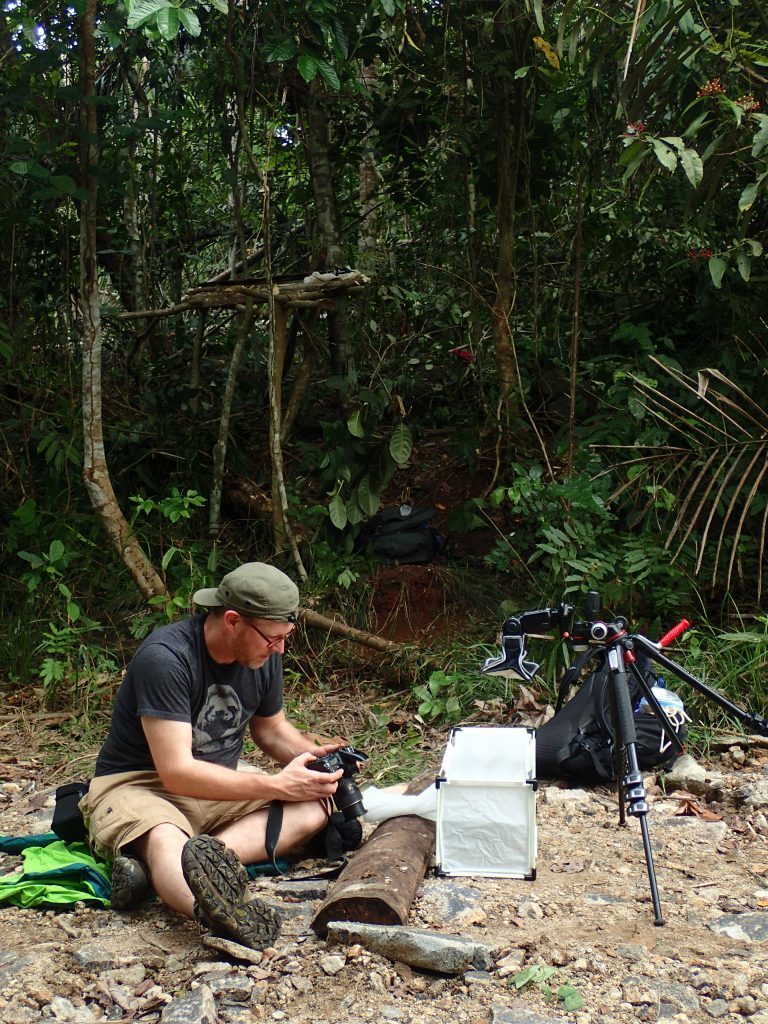 Natural History Photographer Clay Bolt photographing the rediscovered Wallace’s giant bee in a fly box, which was used so that the team could observe the lone female before releasing her back to the nest. © Simon Robson

Bracing the rotting tree, I asked Iswan if he would mind climbing up to take a look inside. As he peered inside the nest he exclaimed, “I saw something move!” Jumping down, for fear that the creature was a snake—his worst fear—after catching his breath, he said that it looked wet and sticky inside. Eli and I looked at each other with reserved excitement. Eli climbed up and immediately felt for certain that it was a bee nest. The structure was just too perfect and similar to what we expected to find. I climbed up next and my headlamp glinted on the most remarkable thing I’d ever laid my eyes on. I simply couldn’t believe it:

We had rediscovered Wallace’s Giant Bee.

After doing a happy dance, I photographed the bee and shot some video proof. My goal was to be the first person to make a photo of a living Wallace’s Giant Bee and I had achieved that goal. Eli, who had been dreaming of this day for twice as many years, had achieved his goal of seeing a species in the wild that nearly no one else had. We were elated.

The Once and Future Queen

Now that Eli and I have returned to the United States with photos in tow, our mission is to work with Indonesian researchers and conservation groups to ensure protection for this magnificent species, which Messer called the “Raja ofu,” king of the bees (although I prefer  “Rotu ofu,” meaning queen bee, since the female is nearly twice as big as the male). And one day, I’d like to return to the North Moluccas to document the lifecycle of this spectacular creature in more detail. But no matter what, just knowing that this bee’s giant wings go thrumming through this ancient Indonesian forest helps me feel that, in a world of so much loss, hope and wonder still do exist.

(Top photo: One of the first images of a living Wallace’s giant bee. Megachile pluto is the world’s largest bee, which is approximately four times larger than a European honeybee. © Clay Bolt : claybolt.com)

Clay Bolt is a Natural History and Conservation Photographer specializing in documenting North American native bees. His images and projects have been featured by organizations and publications such as National Geographic, Scientific American, Outdoor Photographer, New Scientist, and many others. Visit www.claybolt.com to learn more.