That’s how Ecuadorian herpetologist Dr. Luis Coloma describes his team’s rediscovery of a striking yellow-spotted frog, the Longnose Harlequin Frog, which had been lost to science since 1989 and feared extinct.

“This is a beautiful story of hope, but we can’t stop there. What happens next is even more important.” — Luis Coloma

The species, which is endemic to Ecuador, was once abundant in an area above about 1,550 km2. In the late ’80s the Longnose Harlequin Frog suddenly and mysteriously vanished, along with nearly a dozen other Ecuadorian amphibian species. Without the knowledge or tools necessary to try to combat the invisible threat, Coloma, like other conservation biologists across the Neotropics at the time, was forced to bear witness to an unfolding ecological tragedy.

“In those years, I held more than 10 frog species in my hands right before they disappeared,” Coloma, now a batrachologist at the NGO Fundación Otonga, says. “I was lucky in a sense — some of the younger generations have never even seen some of these animals. But it was devastating. When I was a kid, harlequin frogs were my brothers, my sisters, my family. I didn’t need to find them in a book or encyclopedia, they were just there. They were abundant. Suddenly I couldn’t do anything to save these animals that had survived in these lands undisturbed for millions of years.” 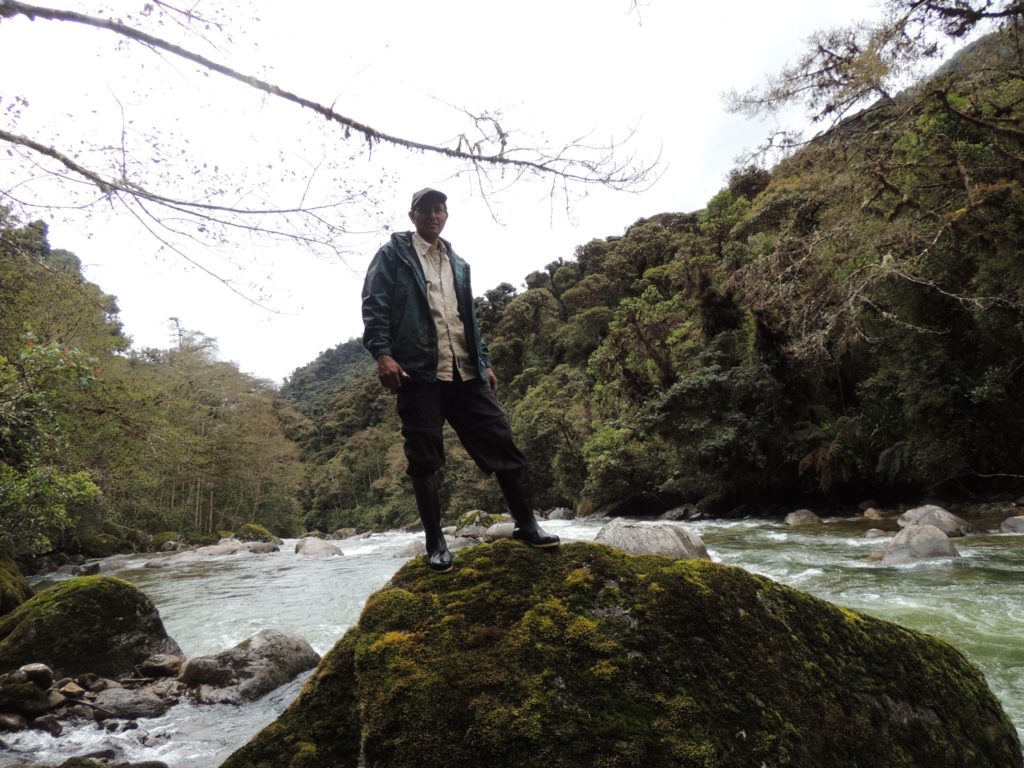 Elicio Tapia used the skills he developed growing up in the jungles of Ecuador to find the lost species. (Photo courtesy of Elicio Tapia)

“It’s a feeling that there are no words to describe,” says Elicio Tapia, a biologist who grew up in the jungle, a veritable frog whisperer who used his keen hunting senses to unearth two Longnose Harlequin Frogs the first night of the survey, and two more in subsequent days. Tapia is the first author on the paper the team published in May in Neotropical Biodiversity about the rediscovery. “You want to cry, you want to scream. Suddenly they’re not just this image in your mind, but they’re real. You can see them, you can touch them, you can study them. Finding hope has been the biggest surprise of this rediscovery.”

With the rediscovery, however, comes some difficult decisions, a tough path ahead, and a team of conservationists grappling with duel emotions and wavering between celebrating a dream come true and fearing a nightmare on repeat.

“After you rediscover a species like this, you calm down and realize you have a new reality,” Coloma says. “With that new reality comes a tremendous responsibility. Do you leave the animals in the wild, where they face even more threats today? Or do you take them to the lab to try to breed them? This is a beautiful story of hope, but we can’t stop there. What happens next is even more important.”

One of the first steps is for the International Union for Conservation of Nature (IUCN) to now change the classification of the Longnose Harlequin Frog from Extinct to Critically Endangered on the Red List of Threatened Species.

“We are thrilled that another amphibian species has been found again,” says Jennifer Luedtke, Global Wildlife Conservation’s manager of IUCN Red List assessments. “It’s an incredible message of hope that some species are showing signs of being able to recover and gives us an even more urgent mandate to protect their habitats.”

The Longnose Harlequin Frog was rediscovered during a four-day amphibian survey of Ecuador’s remote and biodiverse Intag region.

The threats to the Longnose Harlequin Frogs in their natural habitat seem insurmountable, and growing. Chytrid — the fungal disease that is responsible, in part, for the steep declines of amphibian populations in the ’80s and ‘90s — is still present in the area, though these individuals tested negative for the pathogen. Climate change and the expansion of cattle ranching, agriculture and illegal logging is permanently altering the frogs’ home, threatening to continue the devastation where chytrid left off.

“I know firsthand how precious, threatened and scarce these biological jewels are.” — Carlos Zorrilla

The largest immediate threat to these frogs, however, is a large-scale open-pit copper mining project that’s already in the advance phase of development. This is not uncommon throughout Ecuador, where the government is allowing these projects throughout the country, including in some of its protected areas. 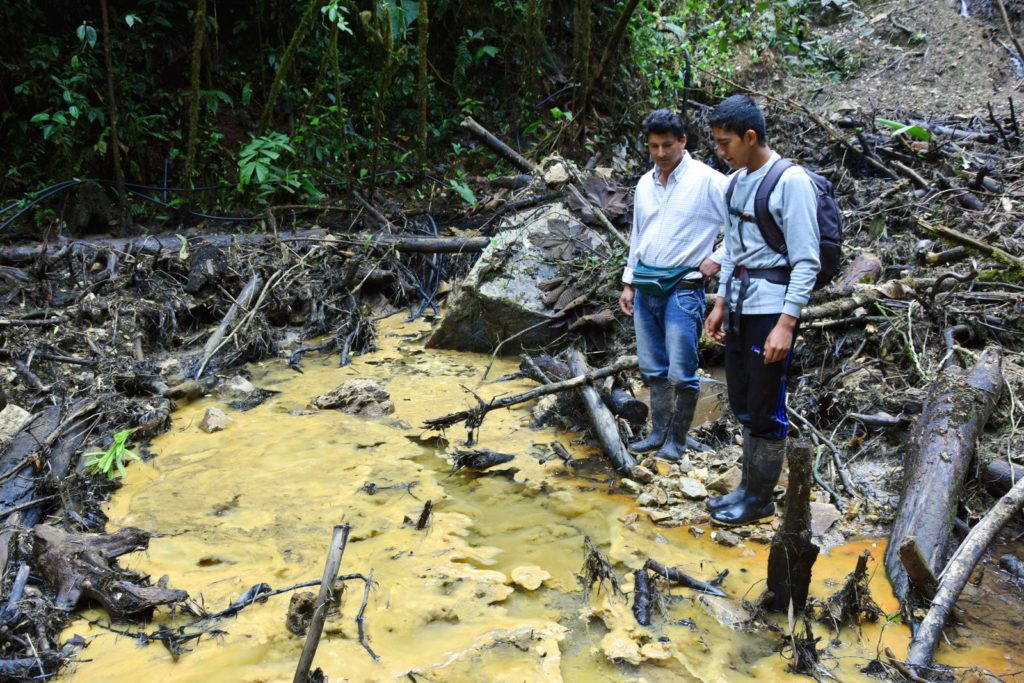 Conservationists are already seeing impacts on water and other natural resources in the Junín Community Reserve. (Photo by William Sacher)

“In no uncertain terms, the mine will be the end of the Longnose Harlequin Frog, unless it is discovered somewhere else on Earth,” Carlos Zorrilla, director of DECOIN, says. “It also means heavily impacting the habitat of more than 10 species of animals facing extinction; in addition to relocation of not less than four communities. We are talking of so much deforestation that it would lead to climate change at the local level, stripping of thousands of hectares of primary cloud forests; contamination of rivers and streams with lead, arsenic, cadium and chromium.”

So it didn’t take Coloma and team long to make a decision. The team brought all four frogs, two males and two females, to the Jambatu Research and Conservation Center, which has extensive experience developing technologies for captive breeding programs for frog species on the edge of extinction, including harlequin frogs. Jambatu’s Arca de los Sapos, or frog arc, is supported by Ecuador’s Ministerio de Ambiente and the Saint Louis Zoo.

“Finding hope has been the biggest surprise of this rediscovery.” — Elicio Tapia

One of the Longnose Harlequin Frogs died for undetermined reasons in the lab, replaced by a fifth frog discovered months later in the field. Although four animals aren’t enough to ensure a genetically healthy captive population — and harlequin frogs have been notoriously difficult to breed, with few exceptions — Coloma says conservationists are much better equipped today to give the frogs at least a chance at a future. 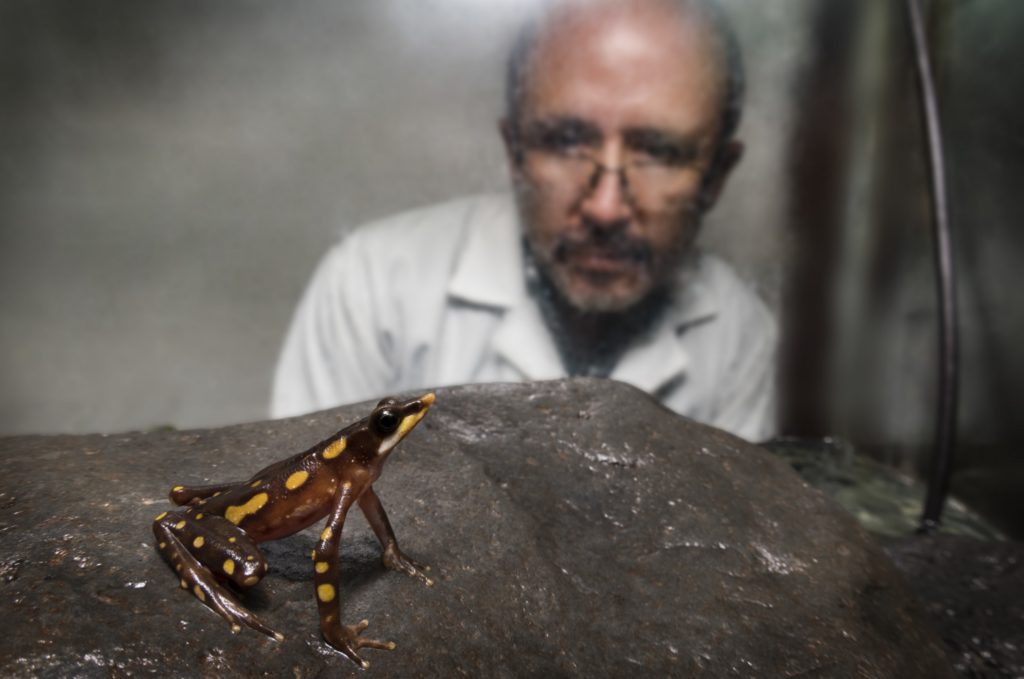 Dr. Luis Coloma looks in on a Longnose Harlequin Frog that his team brought into captivity for breeding at the Jambatu Research and Conservation Center. (Photo by Centro Jambatu/Fundación Otonga)

“In the past we’d bring the animals into the lab and they’d die,” Coloma says. “That has changed. Now we treat chytrid, we quarantine the new arrivals, a veterinarian does parasite analyses, we know what to feed them, and we just know more generally. The technology has improved. We’re in a good place now to at least try to do something to save them. And then if we’re successful keeping them alive, we’ll try to breed them and maybe someday return them to the wild.”

But the dream of someday, somehow returning the Longnose Harlequin Frog to the wild means that there must be a wild to return them to.

Ecuador’s Intag region is a partly mountainous area that includes sub-tropical rainforests in the Andes. According to DECOIN, every year Ecuador loses another 2.3 percent of its forests, giving it the distinction of having the highest deforestation rate in South America. 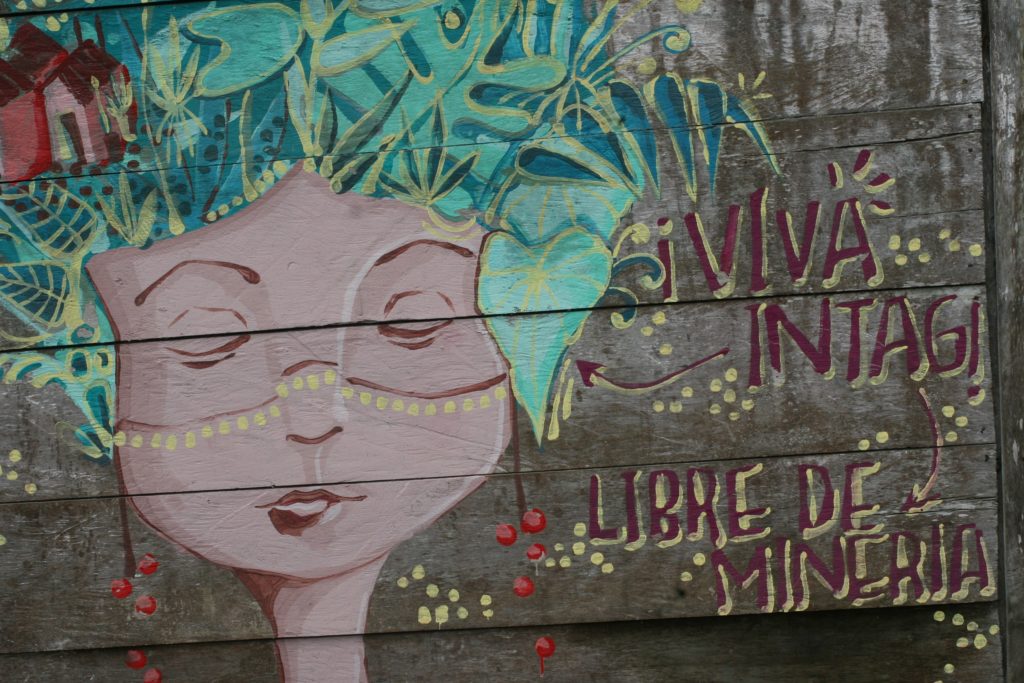 A sign in Intag calling for a mining-free area. (Photo by Elicio Tapia)

Nearly the entire area known as Intag is being set aside for mining, according to Zorrilla, including the last remaining primary cloud forests. In the 4.965 hectare mining concession threatening the Longnose Harlequin Frog’s habitat, a local conservation organization identified the presence of more than 100 species of amphibians, birds and mammals facing extinction, including the Critically Endangered Brown-faced Spider Monkey and the Vulnerable Andean Bear.

“We must save it. That’s the only choice there is.” — Elicio Tapia

This threat was among the reasons Coloma’s team decided to survey the area for amphibians, pulling together evidence that is now being leveraged in the fight against the mining project. In total, the scientists recorded the presence of 16 amphibian species in the area, nine of which are listed on Ecuador’s Red List as facing extinction. 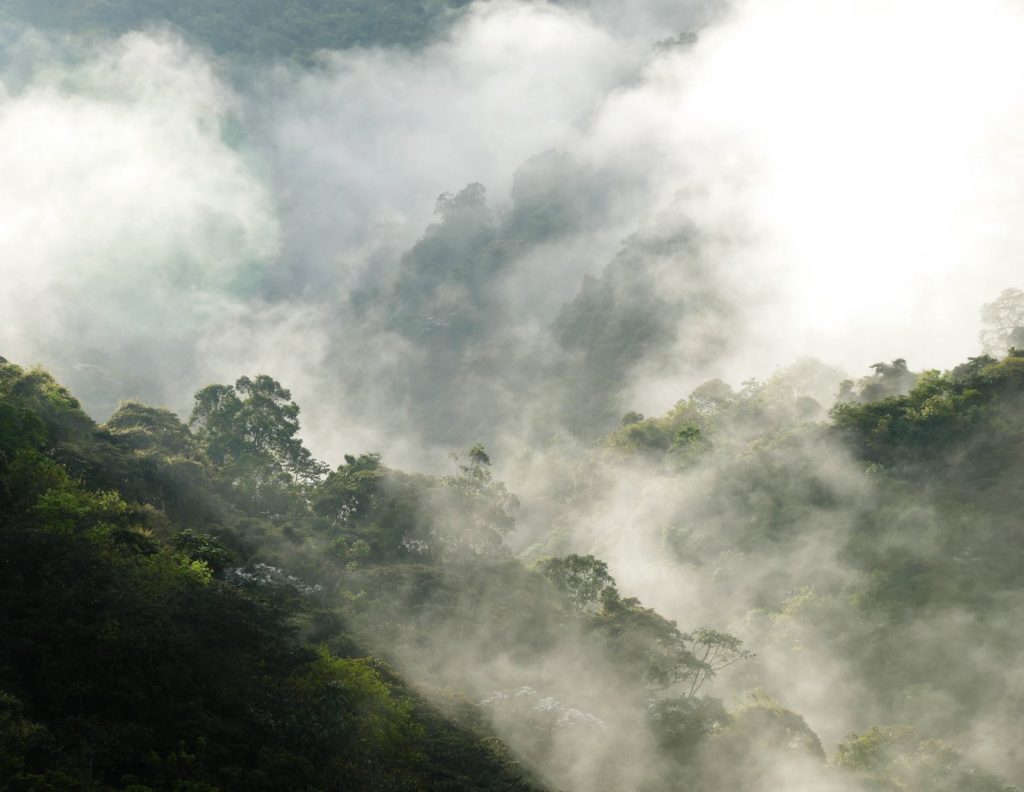 Now the Longnose Harlequin Frog is becoming the symbol of a rallying cry against open-pit mining and other development in the area. According to Zorrilla, the combination of the area’s steep topography, biology, climate, mineralogy and seismic risks, the mining concession would be one of the world’s most destructive, threatening more species facing extinction than any other mine project on the planet.

“I know firsthand how precious, threatened and scarce these biological jewels are,” says Zorrilla, who has called the Intag area home since 1978. “We can definitely use the rediscovery to not only draw attention to the importance of protecting this vanishing habitat, but more importantly, to use the species to uphold the Constitutional Rights of Nature — as guaranteed in Ecuador’s 2008 Constitution. This case is more likely to succeed in the courts precisely because the frog has only been found in one locality, which is now threatened by mining.”

While DECOIN fights the good fight in the courts and by raising the alarm, Coloma and team are urgently encouraging the expansion of the Junín Community Reserve and the restoration of forest clearings. They will continue to survey the area and other sites where the Longnose Harlequin Frog could still exist, looking for more frogs, including tadpoles, so the conservationists can continue to build their insurance population. They’ll study the species’ biology, behavior and reproductive physiology in the lab. And eventually they’ll try to figure out how the species has somehow managed to survive chytrid, even if barely, while other harlequin frog species have been wiped out completely. 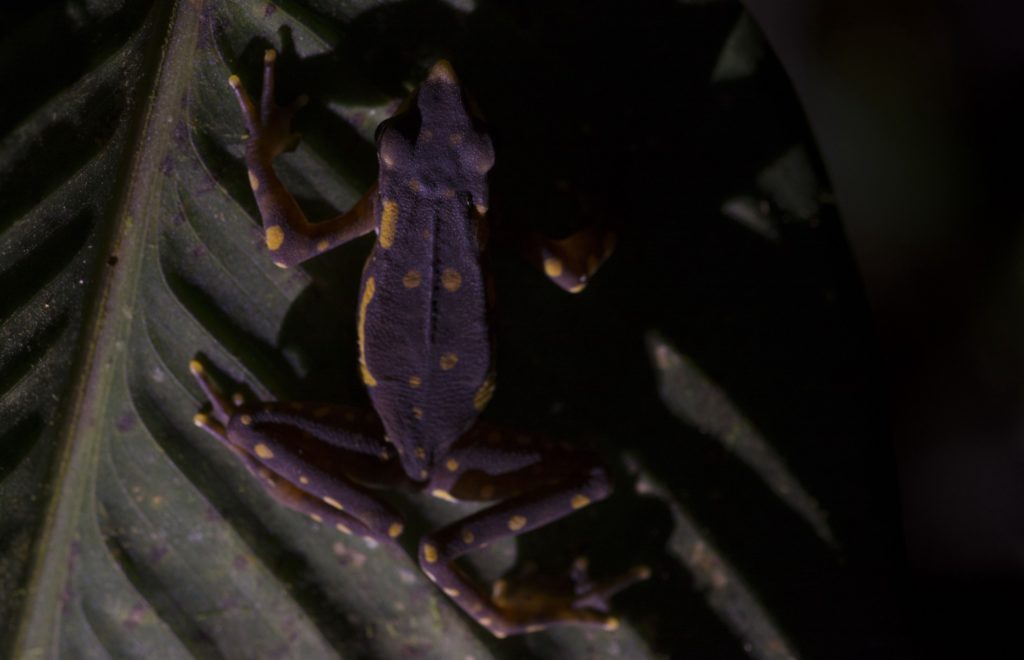 “Finding and photographing this species in the wild still seems unbelievable to me,” says Gustavo Pazmiño. “As a photographer I feel fortunate of probably being the first person to photograph a Longnose Harlequin in almost 30 years. As a biologist and conservationist I am hopeful that this and other similar findings will help the conservation of forests in Ecuador. The real treasure of our planet is not under the earth, but upon it.” (Photo by Gustavo Pazmiño)

For Tapia — the first person to see a Longnose Harlequin Frog in nearly 30 years — all of these efforts come back to a miracle, not just the miracle of rediscovery, but the miracle of life itself.

“We lose too much even when we lose a single species of mite or fly,” Tapia says. “One animal that took millions of years to evolve into its own species is a miracle. How can we even imagine destroying this miracle? Especially a frog, which is complex like us with eyes, a nose, a stomach, skin, legs, a mouth, a tongue, everything. We would be so foolish to let that happen. We must save it. That’s the only choice there is.”

Want to help ensure a future for the Longnose Harlequin Frog and other rare amphibian species? Make a donation today to the Jambatu Research and Conservation Center.