Race For The Rainbow Toad

The first time I heard about the International Bornean Frog Race, I had visions of crowds cheering on Freddie and Frida as they hopped down a frog-track in a bid to beat their amphibious competitor. It was with great relief and excitement that I learned that it is not, in fact, a race among frogs, but among people armed with cameras on a mission to capture beautiful images of frogs. Far from degrading frogs, the Frog Race celebrates them.

And so it was a great honor to be invited as the international speaker at the 5th Bornean Frog Race at the end of April. I was excited to be Borneo-bound, and didn’t miss a beat in asking organizer Dr. Indraneil Das if we could go in search of the iconic Bornean Rainbow Toad (Ansonia latidisca). The rainbow toad was one of the top ten “most wanted” amphibians during the Search for Lost Frogs, and was rediscovered in 2011 after 87 years without trace. Dr. Das promised that we could try, but could not promise that we would find it. I was happy to take my chances.

It was a mere 40-hour hop from my home to Lambir Hills National Park in Sarawak, the site of the frog race. I arrived the day prior to the event and began my own race against jet lag. Like the frogs, I was waking up as the sun sank behind the forest. On the morning of the race, artists, scientists, school children and photographers gathered in the Park headquarters to paint, learn, and document a day dedicated to frogs. The day transitioned into an evening of amphibian-related talks, and I had an opportunity to present to the gathered crowd on photography and storytelling as tools for conservation. It is always a pleasure to speak to an engaged audience, and this crowd was as passionate as they come. 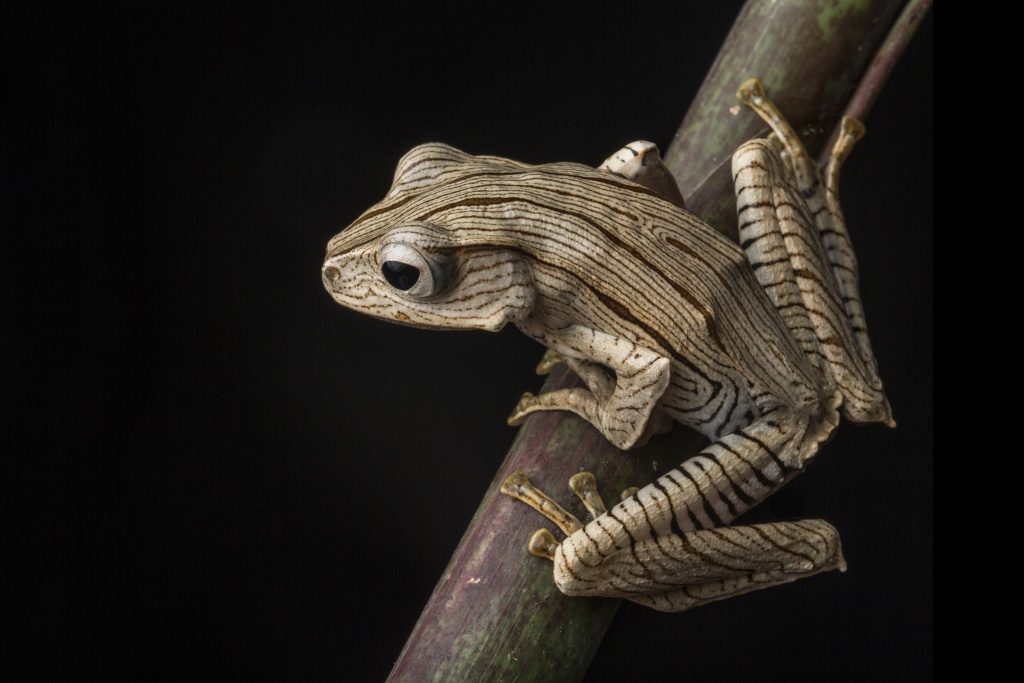 As darkness fell, the 100-plus photographers that had signed up for the race began clicking and flashing in anticipation as they checked memory cards, snapped on lenses, and shaped homemade diffusers. After listening intently to the rules of the race, they scurried into the forest, where they had two hours to find and photograph frogs. As the race drew to a close they gathered like moths around a line of students illuminated behind laptops to download their images for judging. The best photo, rarest species, most species, and best photo taken with a phone were selected and projected onto a big screen following a live auction of frog paraphernalia, and the photographers responsible for each awarded generous cash prizes.

It was an inspiring and fun evening, and a creative way to connect people with amphibians. I couldn’t help but wonder how we could inspire similar initiatives in other parts of the world. The concept was the brainchild of a student of Dr. Das from Universiti Malaysia Sarawak named Pui Yong Min and, as impressive as his vision for the race has been, Pui also has another claim to fame. He was the first person to set eyes on the Borneo Rainbow Toad in 87 years. And now that the frog race was over I could think of little else as I headed to the Borneo Highlands with a team that included both Pui and Dr. Das in search of the elusive amphibian.

We drove up steep windy roads to arrive at the jungle cabins that would be our base for three nights of toad hunting. It rained heavily for much of our first afternoon, which bode well for finding the toad and for being devoured by leeches. The rain subsided with the afternoon light, and we donned our headlamps to embark on the steep, muddy climb through beautiful forest. As we climbed past large dipterocarp trees draped in lush foliage with oversized leaves, it felt truly tropical. It wasn’t long before we were finding frogs resting on leaves by the side of the trail, including a relative of the rainbow toad and another Bornean endemic, Ansonia minuta. As I studied the small toad’s form I was struck by how much they reminded me of the Latin American harlequin frogs, genus Atelopus, with their long, slender limbs and upright gait.

As we climbed higher, and closer to where Pui had rediscovered the rainbow toad, he recounted how it felt to find the toad after eight months of searching. “We were originally looking lower down the mountain, as the toad was known only from that elevation,” he explained, “but when we couldn’t find any sign of it, we decided to search streams higher up. I found the first individual while I was taking a water break, and my eyes scanned this large tree trunk in front of me. The spot where we found it is a couple hundred feet higher than it was originally known from.” It must have felt pretty good, I said, and his broad smile said it all. He told me how he was surprised to find the toad high on the trunks of large trees, as closely related species are found on lower vegetation. Looking for a tiny toad up tall trees in a vast forest sounded a little like looking for a needle in a haystack, but Pui seemed confident he could lead us to one in the coming days, and I felt confidence in him. 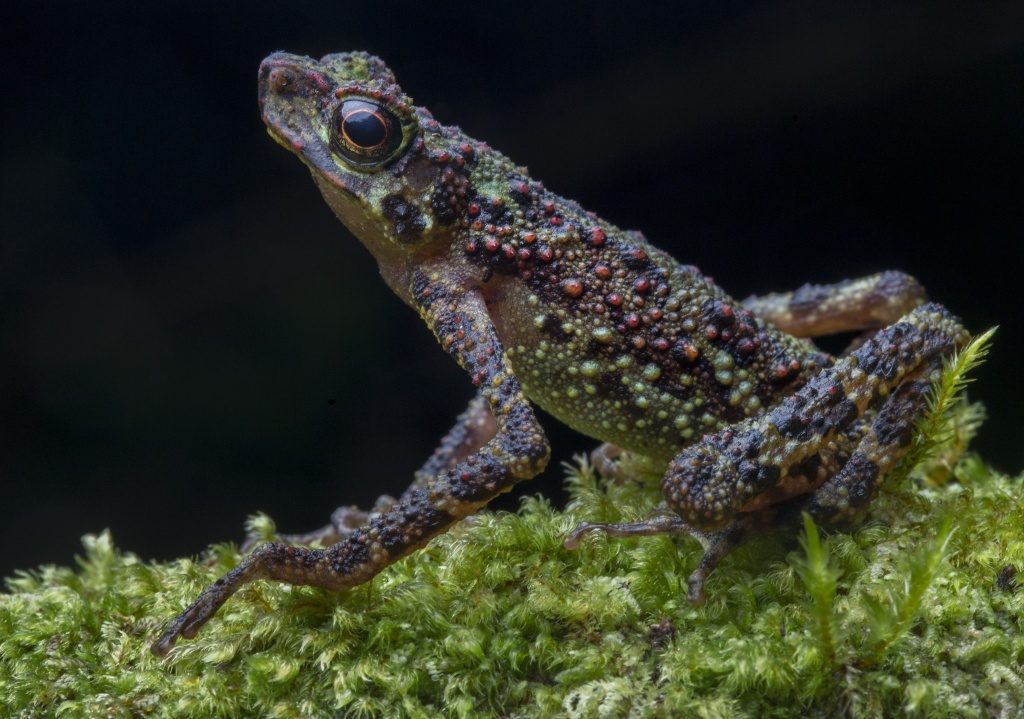 And we didn’t even need that long. As I was fussing around trying to get a photo of Ansonia minuta on a leaf (those guys can jump!), I heard a call from above me “he found one!” There are few more exciting phrases. I grabbed my camera bag and light stand and raced up the muddy slope, stumbling over snaking roots. “Can you see it?” Pui asked as I approached and, like a magnet, the beam of my headlamp was drawn straight to the tiny toad resting at eye level on a leaf beside a large tree. I dropped my gear and enjoyed the moment. In front of me was a tiny celebrity – a pocket-sized Leonardo DiCaprio. Like any dedicated photographer, there was only so long that I could enjoy the moment before wanting to capture it, and so I grabbed my camera.

We found a total of two Borneo Rainbow Toads that night. I was thrilled to get shots of the animal at night and during the day in its habitat. With the toad under the belt we had two more days to explore the forests–the diversity of amphibians, reptiles and insects was astounding. Highlights included the iconic Wallace’s Flying Frog (Rhacaphorus nigropalmatus), a young Borneo Eared Frog (Polypedates otilophus) that looked like it had been carved out of wood and katydids the size of mice. Lowlights included leeches and large night wasps that were attracted to our headlamps and threatened to sting if we didn’t turn them off upon hearing or seeing their approach. “Those things could kill you!” Dr. Das kept assuring us, with a reminder that during their last expedition a team member was hospitalized after a sting to the face. 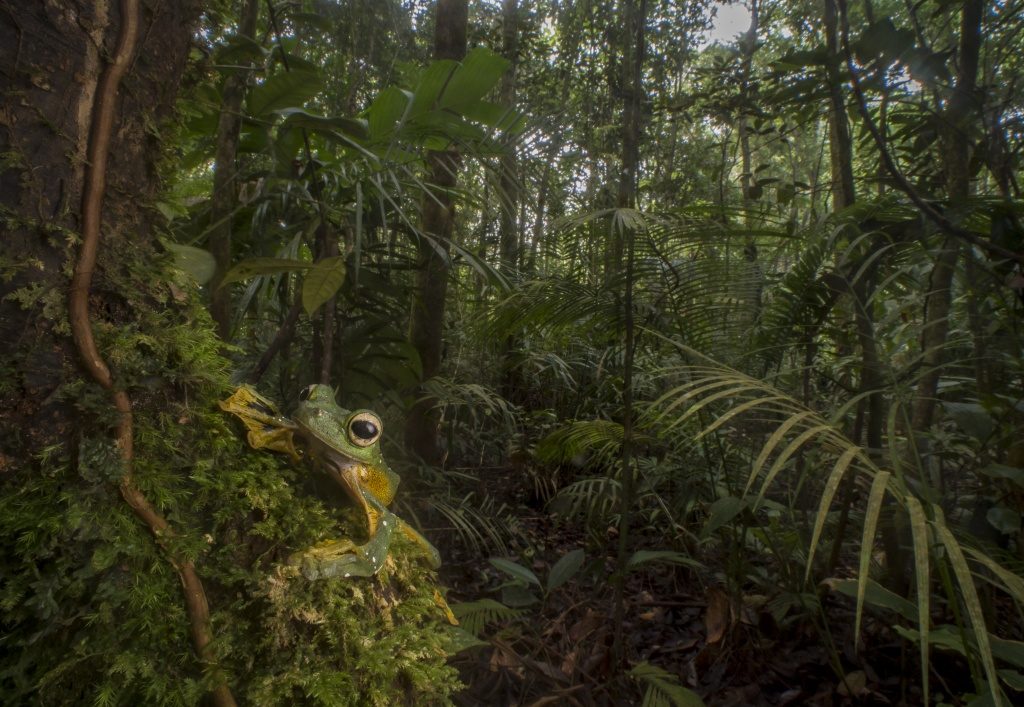 The forest that these species, including the rainbow toad, call home are owned by a private landowner who has built a resort. We hope that by highlighting the unique value of these forests we can convince the owner to create a rainbow toad reserve. Despite a wasp sneaking into our car on the last night and appearing out the air vent to circle us, we avoided stings.

My visit to Borneo was short but amazing, and I am left feeling inspired by the Frog Race and the team of dedicated individuals behind it. I am excited to see it grow and, hopefully, spread.