By Global Wildlife Conservation on April 25, 2018

For Dr. Pierre A. Mvogo Ndongo, the rediscovery of the Edea Crab (Louisea edeaensis) and Balss’s Crab (Louisea balssi), two species only known from museum samples preserved for more than a century, was an important milestone in his doctoral research on African freshwater and mangrove decapod crustaceans (think shrimp, crabs and lobsters). It also reaffirmed his mission as a biologist to find out more about his country’s overlooked freshwater animals.

“When I began my research for a conservation action plan, I felt the Louiseaspecies calling me, telling me that they are not lost, that they are still alive, and that they need me to take care of them and the other organisms in their ecosystem,” says Mvogo Ndongo, a scientist from the University of Yaounde 1 in Cameroon who is passionate about protecting Cameroonian biodiversity.

Mvogo Ndongo’s rediscovery of the Edea Crab in 2015 (named after the town of Edea, where the species was originally discovered in 1910) followed by the rediscovery of Balss’s Crab in 2017 (named after Heinrich Balss, a German zoologist and pioneer in the field of crustacean biology) occurred without much pomp. Mvogo Ndongo first happened to glimpse Balss’s Crab while completing species surveys near Man’s Crater Lake in the Mount Manengouba Ecological Reserve with a local guide, and was not intentionally looking for this species in that moment. 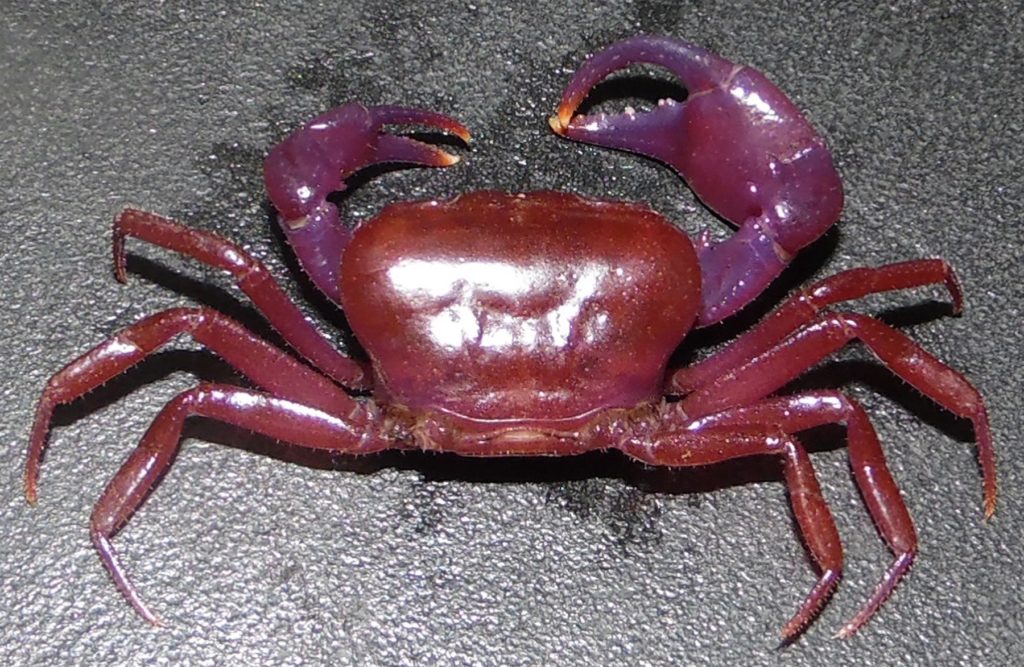 For Prof. Neil Cumberlidge, one of Mvogo Ndongo’s doctoral advisors and a crustacean biologist at Northern Michigan University, this discovery provided the first opportunity for modern scientists to view images of Balss’s Crab while it was alive. The rediscovery also provided new, exciting information about the species’ physical traits that inform biologists about its evolution.

“Preserved samples, especially those that have been preserved for as long as Balss’s Crab, lose their color and turn a uniform light brown,” Cumberlidge says. “The living colors of both crab species are remarkable — for example, Balss’s Crab is totally purple, which is very unusual.”

Similarly, when Mvogo Ndongo first came across the Edea Crab on Bedimet Island in the Lake Ossa wetland complex in southern Cameroon, he and his local guide were on a lunch break.

“I observed local people cutting vegetation and began to talk to them about the detrimental effects of large-scale plant destruction on Bedimet Island,” Mvogo Ndongo says. “It was then that I noticed three small freshwater crabs on land, one damaged, and two in good condition.” 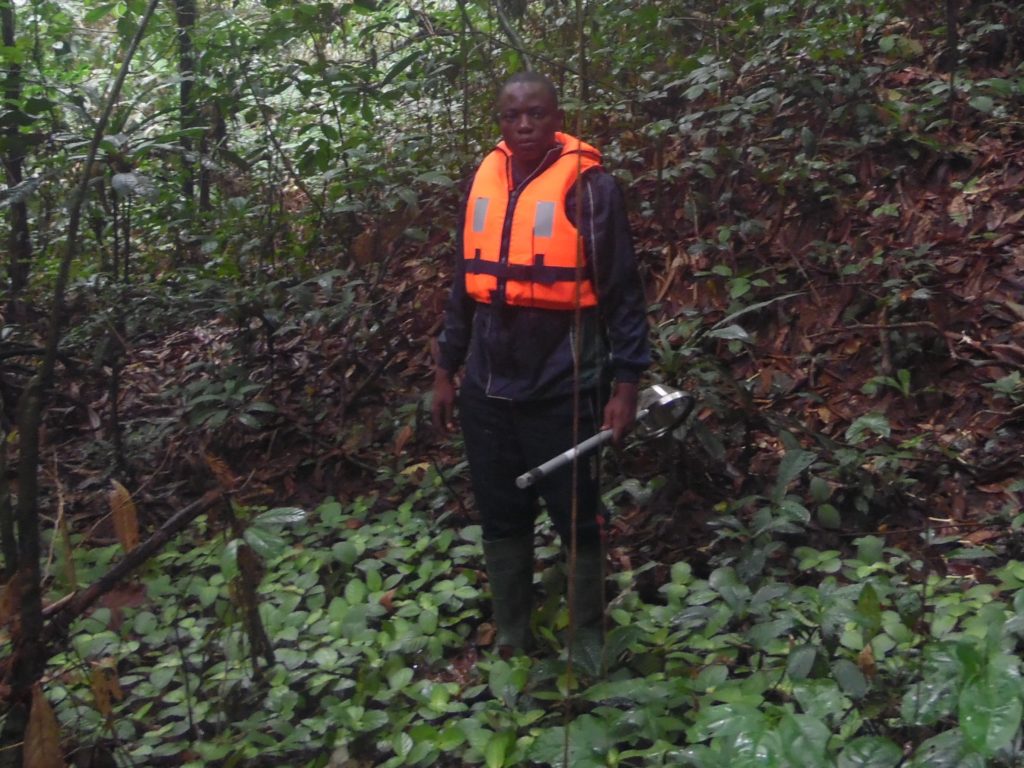 Though Mvogo Ndongo suspected that the crabs might be the long-lost Edea Crab because of their small size (their carapace width was between 16 and 20 millimeters) and because of the location where he found them, he sent more photographs to Cumberlidge in the United States for confirmation.

“I was surprised and amazed to see these animals for the first time in living color,” Cumberlidge says. “You hope that they’ll be there, and you do a survey in a likely place, and hope to get lucky because they could already be extinct. So it’s great to be a part of these rediscoveries.”

Though Mvogo Ndongo was not specifically searching for the Edea Crab and Balss’s Crab when he found them, their rediscovery in these new locations was anything but random. “We had been targeting freshwater habitats in the coastal rainforest areas of Cameroon, surveying six national parks and reserves along the coast from the Nigerian border in the north to the border with Equatorial Guinea in the south,” Cumberlidge says. Ultimately Mvogo Ndongo discovered both lost species in new places, rather than where the literature said they ought to be.

When Mvogo Ndongo and Cumberlidge first begin searching for the Edea Crab and Balss’s Crab in 2015, they weren’t able to locate these species in the areas where German biologists originally found them more than a century ago. In fact, because the Edea Crab had continued to elude biologists in species surveys, Cumberlidge wrote that the species might possibly be extinct in his assessment of the species for the IUCN Red List. 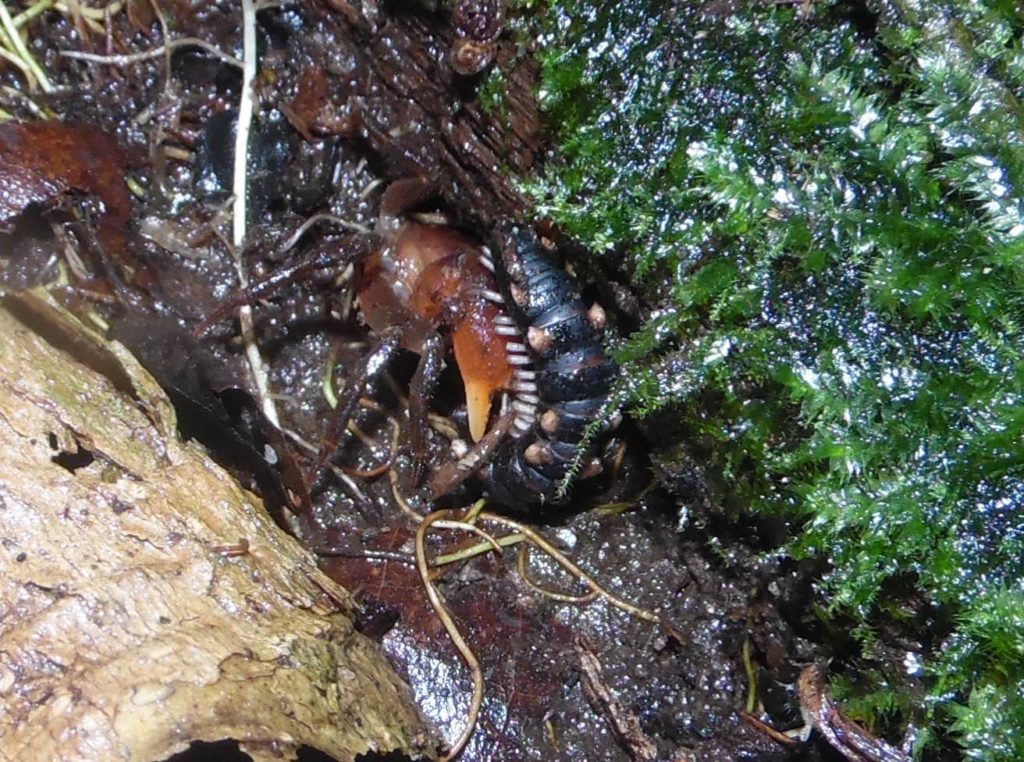 An Edea Crab with a millipede. (Photo by Pierre A. Mvogo Ndongo)

“We got lucky when we found the Edea Crab, which was only in one of the places we originally surveyed,” Cumberlidge says. “The crab was 15 to 20 kilometers away from the town where it was originally found. Not surprisingly, the town of Edea has grown since 1910, and it is now a bustling city on the banks of the Sanaga River — but spreading urban growth means that there are no places where this species can live anymore.”

Mvogo Ndongo rediscovered Balss’s Crab some 80 kilometers from Barombi Mbo, the locality where it was first discovered. Though the Edea Crab and Balss’s Crab were found in different locations than where they were initially discovered, researchers aren’t sure if this indicates a range expansion or a shift in the area where these species exist.

“I think we will find more of these crab species in the different localities the more we look,” says Cumberlidge. “Worst case scenario, they are extinct in their type localities, and they are in decline as a species, and we have just found the last remaining population. There’s so much more exploring to be done that we can’t say for sure yet.”

The rediscovery of the Edea Crab and Balss’s Crab has also led to updates in what we know about the habitat requirements for and ecology of these species. According to Mvogo Ndongo, West and Central African freshwater crabs are usually found in freshwater habitats, in either standing or running water.

“The most exciting or surprising about this rediscovery is that I found the Edea Crab and Balss’s Crab in puddles near small permanent streams and under fallen leaves on land adjacent to streams,” Mvogo Ndongo says.

Until Mvogo Ndongo found these species during his field research neither had been seen in more than a century, meaning all knowledge about the physiology and biology of the Edea crab and Balss’s crab came from two individuals collected in 1910 and 1909, respectively.

When scientists initially discovered the Edea Crab and Balss’s Crab in the early 20th Century, they grouped them together with another crab species in the genus Globonautes, the Liberian Tree Hole Crab, which only occurs in Liberia and Guinea, but not in Cameroon.

“The evolutionary history was a mess because we only had damaged samples,” Cumberlidge says. “It is still incredible considering that the original individuals preserved in a museum in Berlin have survived two world wars. These crabs have been in preservatives for more than a century so, and their DNA has degraded, so before these discoveries, DNA data was unavailable.” 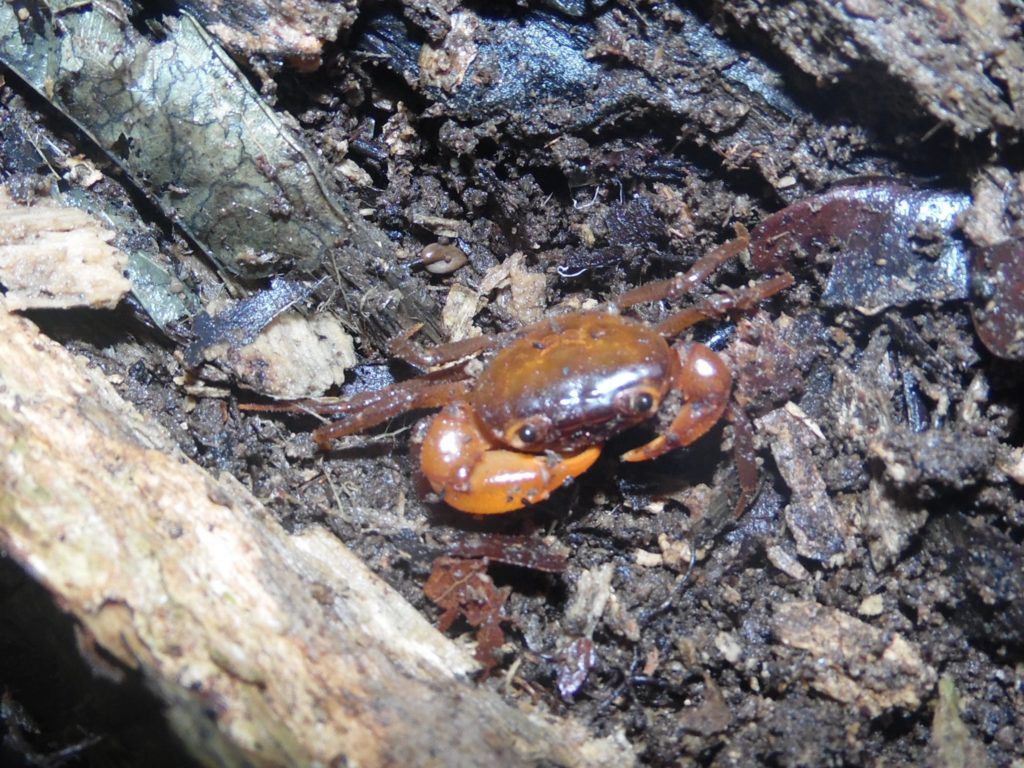 An Edea Crab peeks out at the researchers. (Photo by Pierre A. Mvogo Ndongo)

“I met my wife Louise in Nigeria where she was a professor of mass communications and journalism,” says Cumberlidge. “She took an interest in my interest in crabs and so everywhere we went in Africa, over most of the continent, we would collect crabs together. She really did help advance our knowledge of crabs.”

DNA technology allows researchers to compare the genetic code of different crab species and has been instrumental in identifying new species and revising the evolutionary family tree for freshwater crabs.

“The discovery of new populations of the Edea Crab and Balss’s Crab has allowed us to carry out detailed studies of the genetic information of these species and to reconstruct the evolutionary tree showing their relationship to other crabs,” Cumberlidge says. “This is a massive advance, shining light where we were completely in the dark before.” 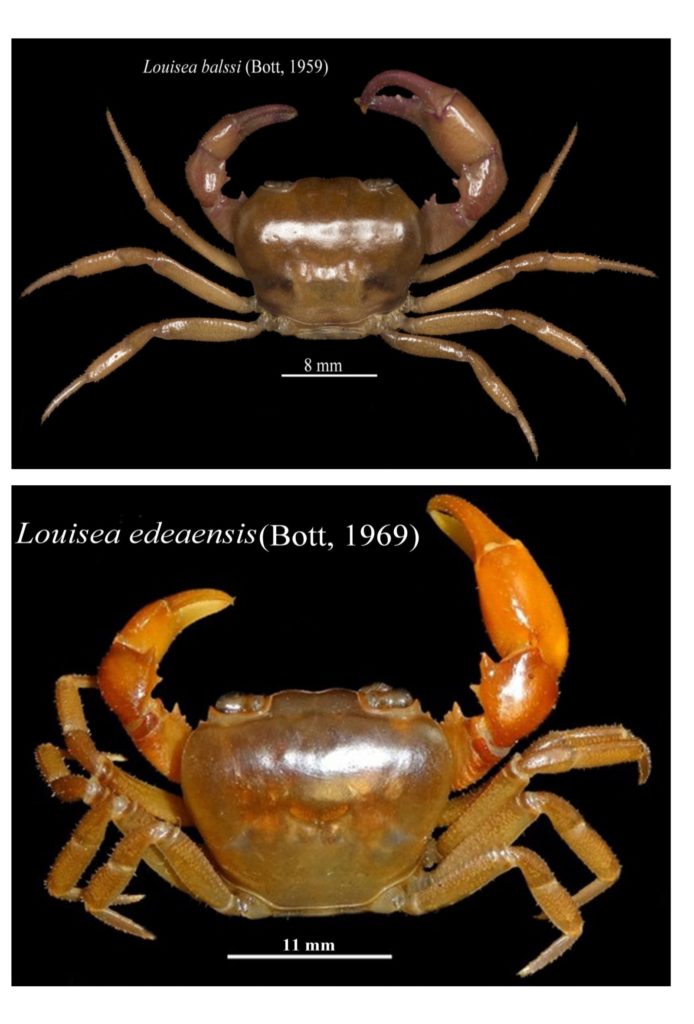 New species discoveries and insights into the evolutionary history of crabs, especially those in Afrotropical region, inspires Mvogo Ndongo and Cumberlidge to continue exploring and surveying the biodiversity hotspots in Africa in the hope that they might discover new crabs, and in the process help to put crabs on the map.

“Freshwater crabs have long been overlooked by biologists, possibly because crabs are exclusively tropical animals and early biologists in the northern temperate zones simply did not encounter crabs very often,” Cumberlidge says. “We are just realizing that these crabs are a massively important component of tropical ecosystems around the world, and what more, that many species in this group are under threat of extinction.”

Working Toward a Brighter Future

The International Union for the Conservation of Nature (IUCN) Red List of Threatened Species currently classifies the Edea Crab and Balss’s Crab as Endangered. Both species are endemic to western Cameroon, meaning that they are found nowhere else on the planet.

As Cumberlidge, Mvogo Ndongo and other crustacean researchers learn more about the diversity of endemic crab species living in Cameroon and other biodiversity hotspots, they are simultaneously working to protect them.

“Crabs in the genus Louisea represent a unique evolutionary lineage that has only recently been discovered and yet is already in trouble,” Cumberlidge says. “Both the Edea Crab and Balss’s Crab have a high probability of becoming extinct if appropriate conservation measures are not taken soon.”

Cumberlidge, who is the chair of the IUCN Freshwater Crustacean Specialist Group, says that they are working to create a conservation action plan for these rediscovered species. A future protection plan could include implementation of habitat restoration measures, designating protected areas, creating a captive breeding program, and hosting publicity and communication events involving the national parks, government, local people, universities and scientists.

As part of his doctoral research, Mvogo Ndongo is investigating the presence of threats to the Edea Crab and Balss’s Crab. His results highlight two threats from agriculture — specifically habitat disturbance and pesticide use — that might harm these endangered species. To help protect the Edea Crab, Mvogo Ndongo is working to continue building capacity among local communities, as he was doing when he first noticed the three Edea Crabs on Bedimet Island. 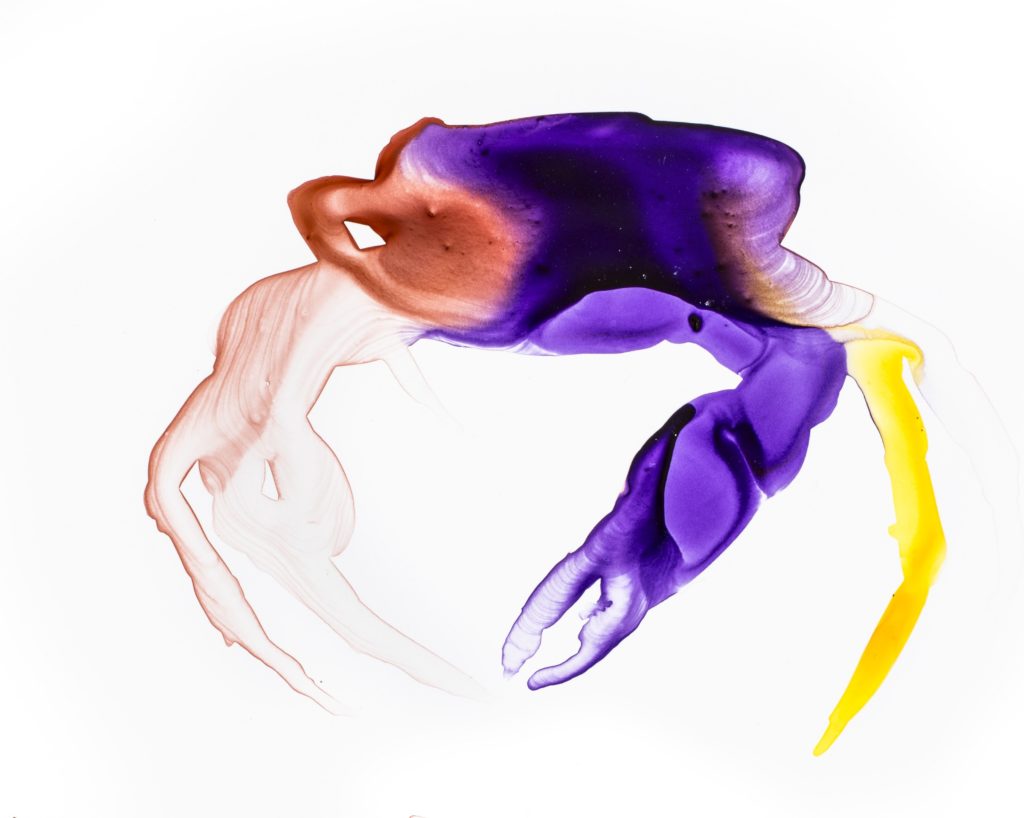 Sierra Leone Crab is one of The Search for Lost Species’ top 25 “most wanted” lost species. (Artwork by Alexis Rockman)

Cumberlidge says the rediscovery of the Edea Crab and Balss’s Crab make him optimistic for the discovery of new crabs and hope for the rediscovery of other lost crab species, such as the Sierra Leone Crab, one of the Search for Lost Species’ top 25 “most wanted” species.

“The reason for the lack of knowledge in Africa is the lack of looking,” Cumberlidge says. “There was a period between 1955 and the 1980s where no new crabs on the continent of Africa were described. And so the gaps that we have are from under-collecting and not from absence.”

In the future, Cumberlidge and Mvogo Ndongo plan to continue the search for new and lost crab species in West and Central Africa, eventually exploring places where nobody has searched for lost or new crab species, such as the rainforests of the massive Congo basin that is largely unexplored for freshwater crabs.

“Right now we’ve got four new species and one new genus from this first round of research in a small area of Cameroon,” Cumberlidge says. “We expect to find more new species even after that by looking at unexplored waterfalls and forested mountaintops.”

To find out more about lost crab species such as the Sierra Leone Crab, visit LostSpecies.org.