Wildlife health specialists have always practiced a version of social distancing with the endangered primates they care for. The global pandemic triggered by the new coronavirus prompted the International Union for Conservation of Nature (IUCN), the world’s leading conservation organization, to send those safety recommendations to great ape managers, researchers and tourism operators March 15. Great apes can be susceptible to human diseases and many national parks in Africa quickly suspended tourism to protect the vulnerable primates.

“The primates that we’re most concerned about are those that are very closely related to humans,” says Dirck Byler, great ape conservation director for Global Wildlife Conservation and vice chair of the Section on Great Apes of the IUCN’s Primate Specialist Group. “The great apes--Gorillas, Chimps, Bonobo, and Orangutans--share more than 97% of their DNA with humans and are very susceptible to human respiratory disease.”

Prevention is the Best Medicine

Scientists and veterinarians are not sure if the new coronavirus can be spread from humans to primates, but they don’t want to take any chances.

“The adage that an ounce of prevention is worth a pound of the cure is absolutely true of disease in free-ranging wildlife populations,” says Kirsten Gilardi, executive director and chief veterinary officer for Gorilla Doctors, which cares for human-habituated Mountain and Grauer’s Gorillas in Africa. “It’s so much easier to prevent the introduction of a disease than it is to control it once it’s in a free-ranging wildlife population. And that’s true of all taxa all over the world, all pathogens.” 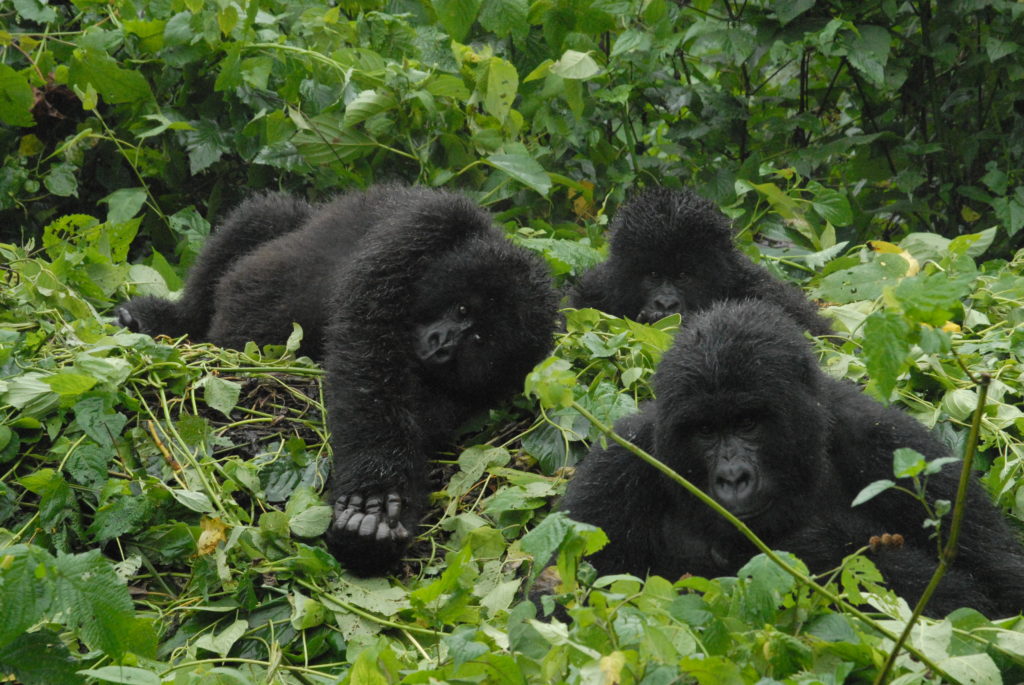 IUCN’s Species Survival Commission’s Wildlife Health Specialist Group and its Primate Specialist Group recommend that all rangers, veterinarians and tourism operators working in areas with great apes stay at least 7 meters away from them, though experts encourage 10 meters if possible. In addition to keeping a safe distance from great apes, the specialist groups also recommend that anyone who is sick or has cold or flu-like symptoms, or has been in contact with anyone who may be sick, stay away from areas with great apes.

These guidelines have been in place for several years, but in the past parks that are home to great apes have not universally followed them. Due to the effect coronavirus is having across the world on public health, travel and tourism, every park in Africa with Mountain Gorillas implemented protective measures, and as of March 25, all Mountain Gorilla tourism was effectively suspended throughout Africa.

Gorilla Doctors first issued a memo to their government and non-government partners in early February warning that the coronavirus could spread to Mountain Gorillas. They reissued that memo March 11, after the first human case of COVID-19 was reported in a Mountain Gorilla-range state. The IUCN echoed those recommendations several days later.

“And by then of course it was clear that COVID-19 was causing a pandemic,” says Gilardi. “Fortunately, our government partners, the park protected area authorities, heard that alert call loud and clear, and so they’ve elected to suspend tourism.”

Past experiences with human diseases have made experts with the specialist groups cautious. Great apes are especially susceptible to human respiratory illnesses, and some diseases that are usually not as harmful in humans, like the flu, are lethal for gorillas. Ebola, tuberculosis and anthrax have also affected gorillas in the past with devastating consequences. In 2003, an ebola outbreak in the Congo caused the deaths of 5,000 gorillas.

“There's only about 1,000 Mountain Gorillas left in the world," Byler says. "You start losing a few of them and we’re at a tipping point for an extinction."

Gorillas, Chimpanzees and Bonobo could be at the highest risk for possibly contracting the coronavirus from humans. They spend the majority of their time on the ground, like humans, and they live in extremely social groups.

If any human-habituated Mountain Gorilla shows any signs of respiratory illness, veterinarians with Gorilla Doctors will mobilize to treat the gorilla as best they can. Instead of trying to move a sick gorilla, they will pay a house call in the forest, taking all the supplies they might need with them. A Mountain Gorilla suffering from a respiratory illness or pneumonia might be anesthetized in the forest and receive supportive IV fluids, antibiotics and anti-inflammatories. Veterinarians would also take samples from the gorilla for diagnostic testing, before reversing the anesthesia and returning the gorilla to its group. But there are no ventilators in the forest, which is why Gorilla Doctors is focused on preventing Mountain Gorillas from being exposed to the new coronavirus.

Orangutans, which are also Critically Endangered great apes, live in Malaysia and Indonesia high in the trees of the forests and rarely venture down to spend time on the ground. That natural social distancing may give them a little more protection, though experts will follow the same guidelines with them. Orangutans’ arboreal nature is not the only thing that may keep them safe. With the exception of mothers and infants, orangutans are solitary, which means they may be less likely to quickly spread disease to other members of their species.

Still Caring, From a Distance

Though experts are recommending socially distancing themselves from great apes, they are very intentionally not recommending social isolation between the primates and rangers. Many of these great apes are habituated to humans, meaning they are not afraid of them. That lack of fear could make them extremely vulnerable to poachers or hunters without rangers to protect them. 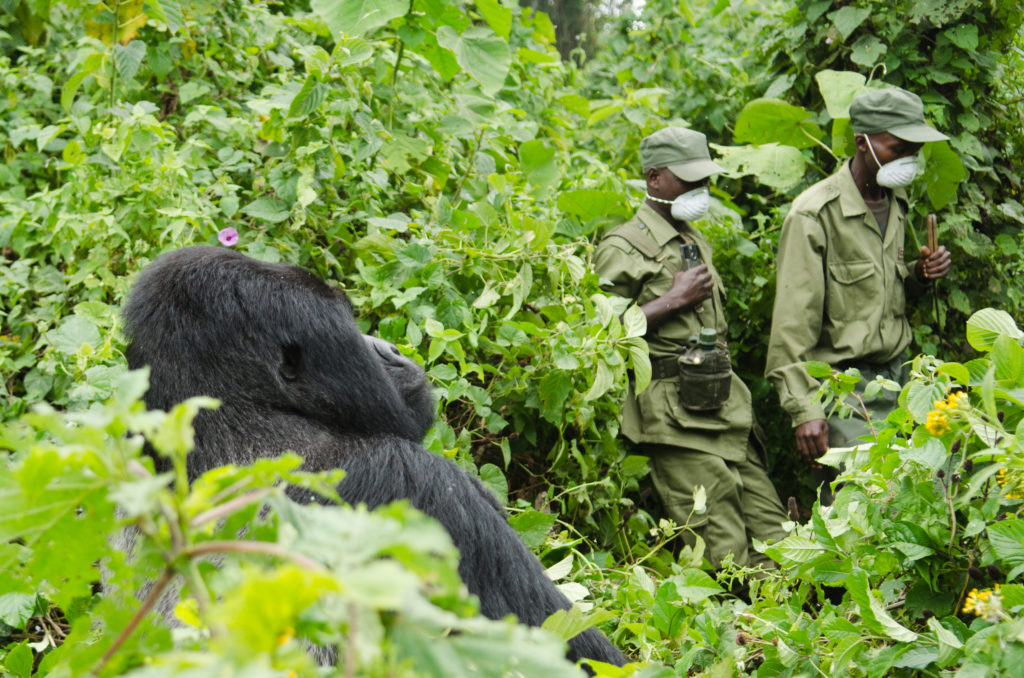 Rangers and veterinarians are still entering parks and sites where great apes live daily to keep the apes safe from illegal poaching and ensure they are healthy. They are taking extra precautions when visiting great apes, like Mountain Gorillas. Rangers are wearing masks to minimize the chance of respiratory droplets infecting Mountain Gorillas, and instead of going home every evening, rangers are staying at their patrol posts for several days at a time, reducing the number of people entering the parks each day.

Financial Fallout From the Pandemic

All parks in Africa have chosen to be much more cautious and strict when it comes to non-essential visitors, like tourists. The parks temporarily closed down tourism because it is much more likely that tourists may come into contact with human-habituated Mountain Gorillas accidentally.

“Especially when you have big groups of gorillas with infants, the juveniles are just so curious and they like to just run up to tourists and poke around,” explains Byler.

By suspending tourism, rangers and tourism operators will not have to depend on tourists to self-select and stay out of areas with great apes if they have been sick in the previous 14 days or have a cold. With COVID-19, tourists may not have been able to effectively self-select anyway since people may be asymptomatic, or have mild symptoms for nearly a week.

Though closing down Mountain Gorilla tourism may be the best option to protect the gorillas, it will not come without financial consequences. The money generated from tourism helps support the operation of many parks in Africa. A tour to see gorillas can cost $1,500 per hour in some countries.

Virunga National Park in Democratic Republic of Congo is one of the parks that chose to temporarily close Mountain Gorilla tourism as a result of the recommendations from the IUCN. About 40% of its revenue comes from tourism. The park announced March 23 that it would not take any new bookings to see Mountain Gorillas until June 1.

“People right now are paying a lot of attention to tourism, and rightly so because that is something we can control and manage and limit,” says Byler.

It’s not yet clear when parks in Africa may be able to reopen to tourism, but in the meantime, the IUCN guidelines combined with a reduction in tourism could help keep the potentially deadly and highly contagious coronavirus from infecting already-endangered populations of great apes.