In the forests of West Africa, two species of ape lived in harmony for generations. But now one of those species — humans — is disrupting that relationship in pursuit of economic growth that may or may not actually benefit those who sacrifice the most.

Western Chimpanzees (Pan troglodytes verus) and Guinean villagers both have starring roles in “Cries of Our Ancestors,” a new documentary that  has screened in the DC Environmental Film Festival, Wildscreen, Wildlife Conservation Film Festival, Jackson Wild Film Festival and All Living Things Film Festival (and is also available to watch online), and has been winning awards at film festivals around the world, including an honorable mention in the 2020 Jackson Wild Media Awards. The subject of the film first piqued the interest of Dr. Rebecca Kormos, a senior associate at GWC, when she was conducting a survey of Guinea’s chimpanzee population two decades ago.

“Our team traveled around Guinea living in a tent for 18 months and trying to figure out how many chimpanzees there were in the country,” Kormos recounted. “And around the campfire at night, talking with hunters and chiefs of the village, we would hear stories about how people in many parts of Guinea felt that chimpanzees were their ancestors, and that’s why it’s forbidden to hunt them and to eat them. So that was one reason that we wanted to try and capture some of these stories, because as the chimpanzees disappear and as the connection between people and the land disappears, these legends are disappearing as well.” 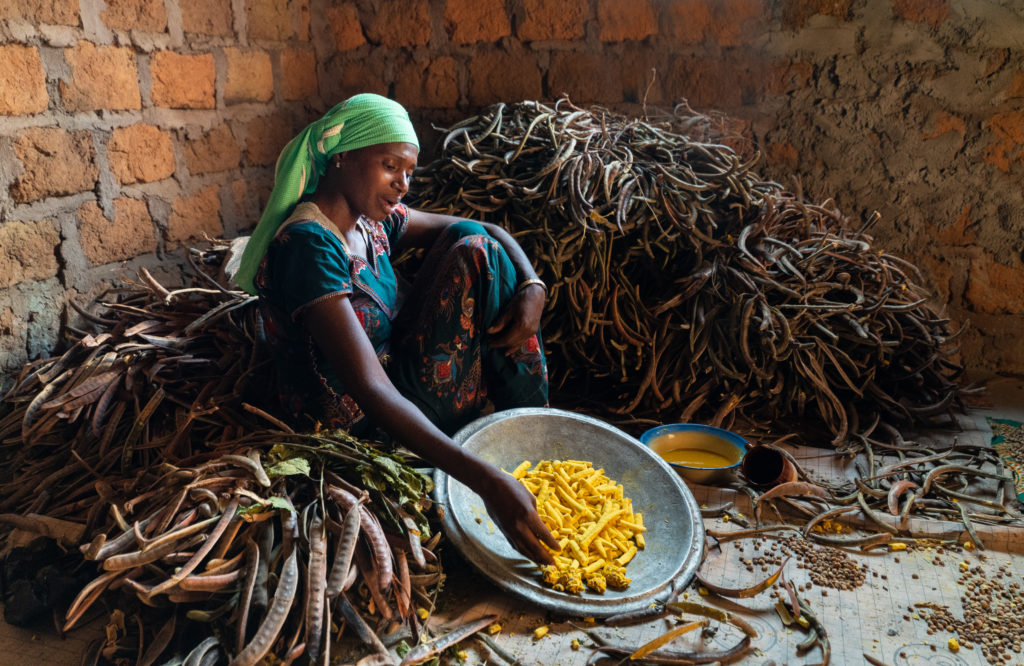 A still from "Cries of Our Ancestors." Women Rebecca Kormos and Kaylanee Mam interviewed for the film shared stories of living alongside Western Chimpanzees.

Kormos teamed up with Kalyanee Mam, a filmmaker with an interest in documenting the relationship between people and nature. In a month of filming, they heard many stories of farmers leaving out fruit and crops specifically for their neighbor chimps. Mam was particularly struck by a story of a small spring that provided water for one village’s 300 human residents and the local chimpanzees. “The chimpanzees would come and they would wait their turn, or the villagers would come and wait their turn — all coming to share the same source of life. And it was such a beautiful symbol.”

At last estimate, Guinea had over 33,000 Western Chimpanzees — two-thirds of the species’ remaining population, which is classified as Critically Endangered by the IUCN Red List of Threatened Species. But the country also contains the world’s largest reserve of bauxite, a rock that is used to produce aluminum, a material used in everything from soda cans to smartphones to airplanes. The mining has led to massive habitat destruction, the main factor in the 80% decline in Western Chimpanzee populations since 1990.

“When we went to the Boké area where the bauxite deposits are, it was just a moonscape,” Kormos recalled. “There was nothing living left, and these mines are all back to back, so there aren't that many places for the chimpanzees to go.”

A still from "Cries of Our Ancestors" showing a bauxite mine in Guinea. (Kaylanee Mam)

Historically, many Guineans have welcomed mining operations nearby, in the hopes that it would bring much-needed jobs and electricity to rural areas. Kormos described how 20 years ago in Boké, local people were optimistic about what mining would bring to their communities. “And now 20 years later, when people aren't seeing those benefits, they are rising up.” Several villages have filed a complaint against the International Finance Corporation (the private lending branch of the World Bank), for financing the expansion of a bauxite mine that took people’s ancestral land without appropriate compensation, destroyed the environment and people’s livelihoods as a result.

While the benefits from mining have not materialized, the human and chimp populations nearby are seeing the consequences. The mining process has polluted water supplies for many communities — including the communal spring shared with the chimps. Drinking this water now causes stomach problems and other ailments in humans. And as forest is destroyed to make way for the mines, not only do the chimps have fewer places to go, but other animals have fled as well, leaving fewer food sources for these stricken villages.

“Cries of Our Ancestors” gives local voices a rare chance to be heard. Most of the people interviewed for the documentary were local villagers, many of them women, who seemed surprised that the filmmakers wanted to talk to them.

“No one has ever come to them to ask them about the chimpanzees,” Mam said. “People have so much wisdom to share; they've been living with the chimpanzees all their lives, and for generations.”

The way Mam sees it, the contrast between the shared spring and the desolation of the mining site show us what options lie before us. “We have here, side by side, two images of what life could be like.” One choice is exploitation; the other is co-existence."

Cries of Our Ancestors was supported through grants from the National Geographic Society, Arcus Foundation and Global Wildlife Conservation.