The following story is part of Global Wildlife Conservation’s new Lost Heroes series, which profiles individuals around the world who are in search of the lost species that have captured their hearts and imagination.

To say that Dr. Bernie Kuhajda loves fishes—especially underappreciated tiny freshwater fishes—would be an…understatement. There is rarely a day when he isn’t wearing a fish shirt or a fish tie, including to weddings. His house is adorned with fish artwork. Every Christmas, he puts up a “Fishmas” tree, decorated with fish ornaments he’s collected over the years and wrapped in lights the shape of bass. His license plate reads I-C-H-T-H for ichthyologist—someone who studies fishes. And his interest in fishes even helped him woo his now-wife when they met at his brother’s wedding in 1987.

“After the reception, we took a long walk, during which time he shared with me all about his recently completed master’s thesis, which was on, of all things, fish sperm,” said Melissa Kuhajda. “His passion for fish was admirable. ‘Such an interesting dude,’ I thought.”

Today Kuhajda is the science program manager at the Tennessee Aquarium Conservation Institute, where he works with 20 threatened and endangered species of fishes, including sturgeons, minnows, catfishes, cavefishes, and topminnows. He starts every summer working with a group of undergraduate students, sparking in them a new love for fishes. He co-described the Cahaba Shiner, a rare species, and he discovered one of just three species of cave shrimp in the United States. And he is the lead on an expedition to find the lost Syr Darya Shovelnose Sturgeon, one of GWC’s 25 most wanted lost species. 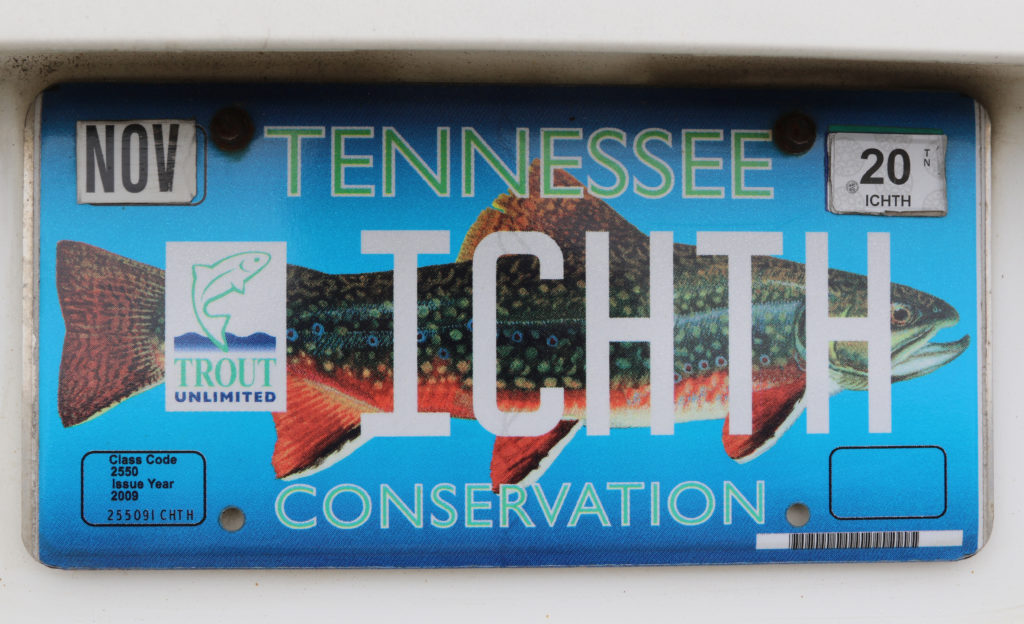 Before the Syr Darya Shovelnose Sturgeon captured Kuhajda’s imagination, though, it was the Alabama Sturgeon that set him on an unexpected path, thrusting him into the center of a public and contentious political controversy.

In 1993, while Kuhajda was considering working on a dissertation about minnows at the University of Alabama—where he would be employed for the next 19 years—the U.S. Fish and Wildlife Service developed plans to list the Alabama Sturgeon as an endangered species after determining that it was its own unique species and rare, limited in range to one river system. Immediately a business coalition of powerful businesses mobilized to fight the listing of the fish.

A group of ichthyologists met to write a report supporting the listing and sent it to the U.S. Fish and Wildlife Service, prompting a lawsuit from the business coalition for not including their voice. A judge agreed with the business coalition, banning the publication of the report and ordering a gag order on the scientists at that meeting, prohibiting them from saying anything about the Alabama Sturgeon in any public meetings. 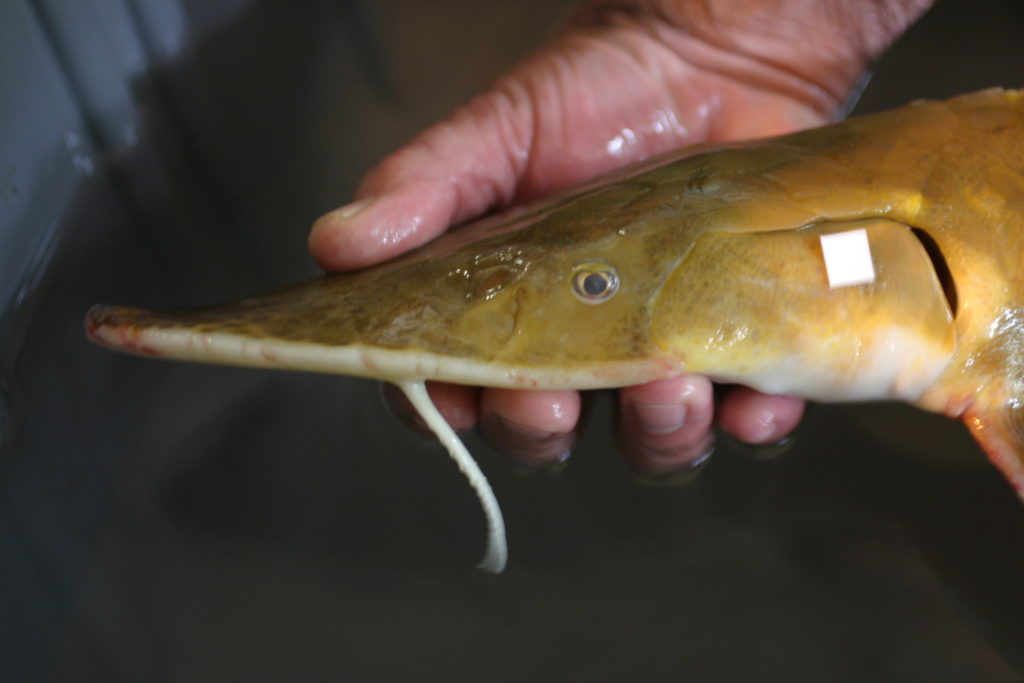 In 2008, Kuhajda helped implant a sonic tag into an Alabama Sturgeon that was one of the last individuals to be caught and released by scientists. (Photo courtesy of Bernie Kuhajda/Tennessee Aquarium Conservation Institute)

Kuhajda, however, was the only ichthyologist from the South familiar with the Alabama Sturgeon and not at that meeting, and therefore suddenly the only scientist who could share the scientific findings at public meetings.

“There was one person who stood up and spoke for the listing at the first meeting. That was me,” Kuhajda says. “I stood up there and told them that the sturgeon was distinct and that it was not extinct. I told them that fish was really rare and that I fully supported a listing of the species as federally endangered. When I stopped talking, you could hear a pin drop. It was surreal.”

Although the Alabama Sturgeon wasn’t listed until 2001, Kuhajda’s growing involvement and leadership in its protection spurred him to change his dissertation topic from minnows to sturgeons. He specifically looked at the morphology and distinctiveness of North American shovelnose sturgeon species, including the Alabama Sturgeon and two species in the Mississippi River drainage, the Pallid and the Shovelnose Sturgeon and their hybrids. The experience also inspired in him an interest in doing more than publishing about his findings—but using those findings to help protect the natural world, something he is able to do in his role at the Tennessee Aquarium Conservation Institute.

“I can give talks at scientific meetings on all of these endangered species. I can publish papers in scientific journals and just keep preaching to the choir,” Kuhajda says. “Yet all of the habitat for the species continues to decline. In the Southeast, most of the public continues not to support environmental issues. They don’t put pressure on their politicians to support environmental issues and everything is going south. If you just stay in your ivory tower, nothing is going to change.” 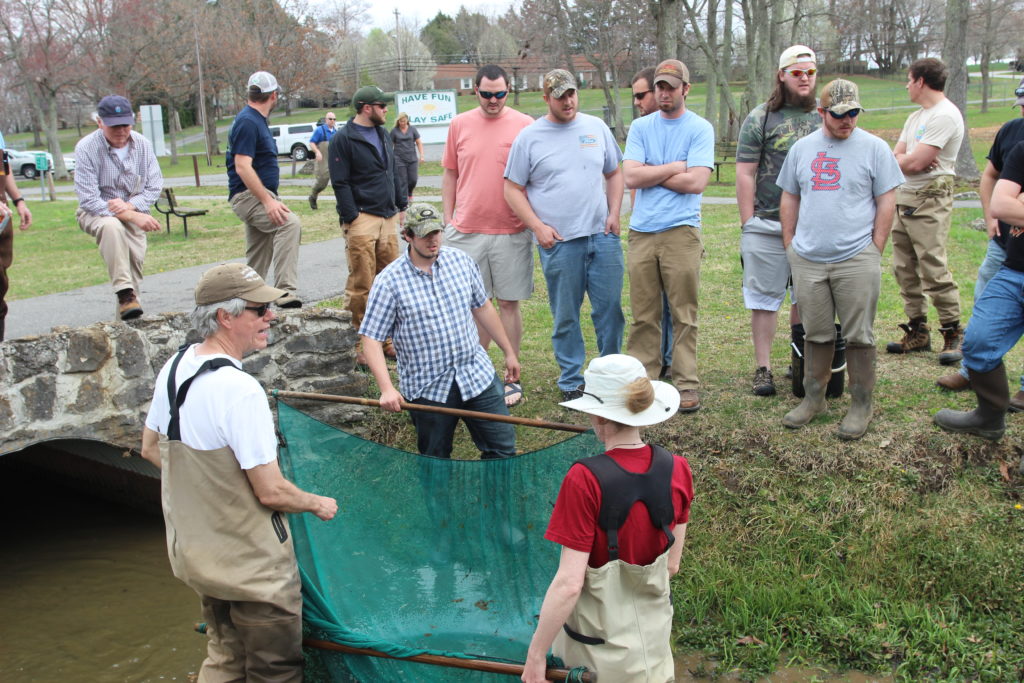 Kuhajda shares his love of fish by taking students out to experience nearby biodiversity. (Photo by Thom Benson/Tennessee Aquarium Conservation Institute)

In addition to talking to visitors at the Aquarium about fish, Kuhajda shares his enthusiasm for fish with students of every age by helping them experience what originally got him interested in fish generally—getting out into the water to witness the incredible diversity of wildlife. This includes undergraduate students, all the way down to Kuhajda’s own great nieces and nephews, and can involve some offbeat techniques.

“Some of the minnows found in the southeastern United States can be pretty difficult to tell apart, even for scientists,” says Dr. Ana George, Tennessee Aquarium Conservation Institute’s vice president of conservation science and education and Kuhajda’s boss. “Bernie finds it fairly easy, though—he looks at the expressions on their faces. To him, some minnows look surprised, while others look scared and others look serious. This is a small example of why students love working with him; he makes studying fish fun and unforgettable.”

The lost Syr Darya Shovelnose Sturgeon is one of the smallest sturgeon species in the world, growing no more than one foot long. This fact is especially endearing to Kuhajda, who helped spearhead an exhibit at the Tennessee Aquarium about small fish.

“When people think about sturgeons, they think about the big ones, the Beluga Sturgeon that gets 23 feet long,” Kuhajda says. “But what keeps me going is my interest in little fishes. Almost all of the animals I study seem to be miniature. They’re not just food for bigger fish. They’re cool in their own right.”

While Kuhajda was studying shovelnose sturgeon species in North America, he wanted to broaden his work to shovelnose sturgeons in Central Asia, leading him to the Syr Darya Shovelnose Sturgeon. He has studied preserved individuals in museums during visits to Moscow and St. Petersburg in 1999 and 2004.

“It would mean the absolute world to Bernie if he were to find a Syr Darya Shovelnose Sturgeon,” says coworker Shawna Mitchell Fix, Conservation Institute science coordinator. “In a time where there are so many stories about species around the world going extinct, to rediscover a freshwater fish that was assumed extinction would be very exciting for all of us, and especially for Bernie.” 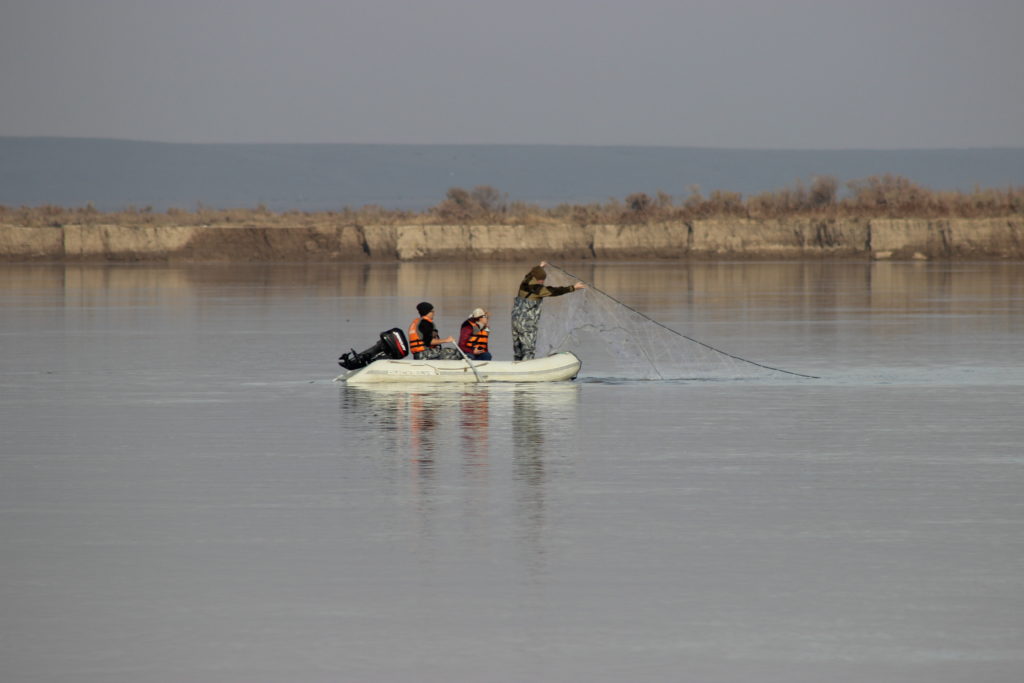 Although the recent expedition to Kazakhstan in search of the sturgeon in the Syr Darya River—its only-known home—didn’t result in its rediscovery, Kuhajda returned to the Tennessee Aquarium feeling even more hopeful that it may still be out there. Historically plagued by dams that slow the water flow to a stand-still, the Syr Darya River still had some areas with free-flowing water, suitable habitat and a surprising abundance and variety of fish species. The expedition team aims to return to the Syr Darya River in the fall and if they find it, Kuhajda says, it would be the capstone to a career committed to fish conservation.

“It’s really cool to find something that no one else has seen before,” Kuhajda says. “But just as cool would be to rediscover something that hasn’t been seen by a scientist since the 1960s. It would give hope to the Syr Darya River ecosystem and to everyone else out there looking for these whimsical, wonderful lost species.”