When the COVID-19 pandemic thrust Ecuador into lockdown in March 2020, people were subject to quarantine and curfews. Yet the extraction of oil, gold and palm oil—considered a national priority—has continued throughout the country’s northern Amazon region.

Then on April 7, the biggest oil spill in the last decade dumped over 15,800 barrels of crude oil and fuel into the Coca and Napo rivers. At least 27,000 Indigenous peoples live along these rivers, including the Kichwa. The rivers provide drinking water to Indigenous communities throughout Ecuador, Peru and Brazil. The area also overlaps with the Bajo Napo Key Biodiversity Area, which is home to many endangered and vulnerable wildlife species and is critical for the global persistence of biodiversity. 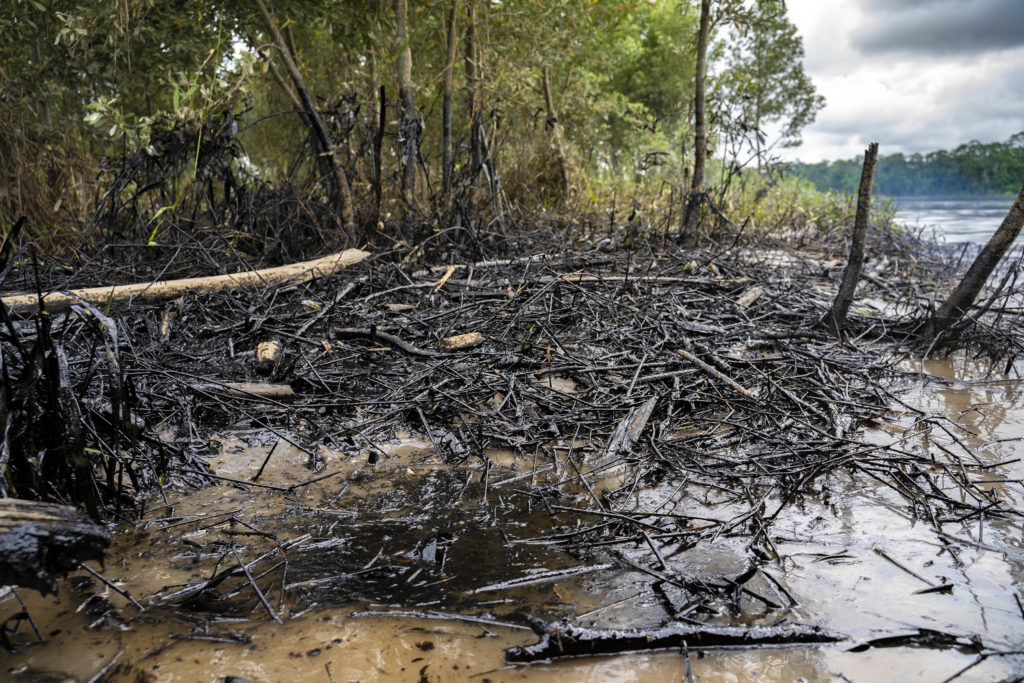 The spill left the Kichwa and other nearby communities quarantined with contaminated water, fish and crops, waiting in vain for any sort of response from the government or the oil companies. It took over two weeks for the companies to provide emergency assistance.

“The river is our main food source. As it was contaminated, the fish died. We can’t feed ourselves like we used to,” said Verónica Grefa, president of the community of Toyuka. “As Kichwas, our customs, beliefs and spirituality were contaminated just like the river because, if nature is damaged, we as people are also damaged.”

The Kichwa filed a lawsuit against the Ecuadorian government and the oil companies: the private-public OCP Ecuador and the state-owned Petroecuador. After repeated trial delays by the court system, on September 1 the lower court judge ruled against the Kichwa, citing it was the incorrect legal venue. Maria Espinosa, the lawyer for the case from GWC partner Amazon Frontlines, is helping them appeal and continue the fight for justice.

“In ‘normal’ times a spill substantially modifies life. In a pandemic context, it becomes something much more dangerous,” says Espinosa. “The justice system obligations in this case are increased in order to guarantee that not only does [the oil] not remain in impunity, but it does not repeat itself. The situations that triggered the events that occurred on April 7 can happen again at any time.” 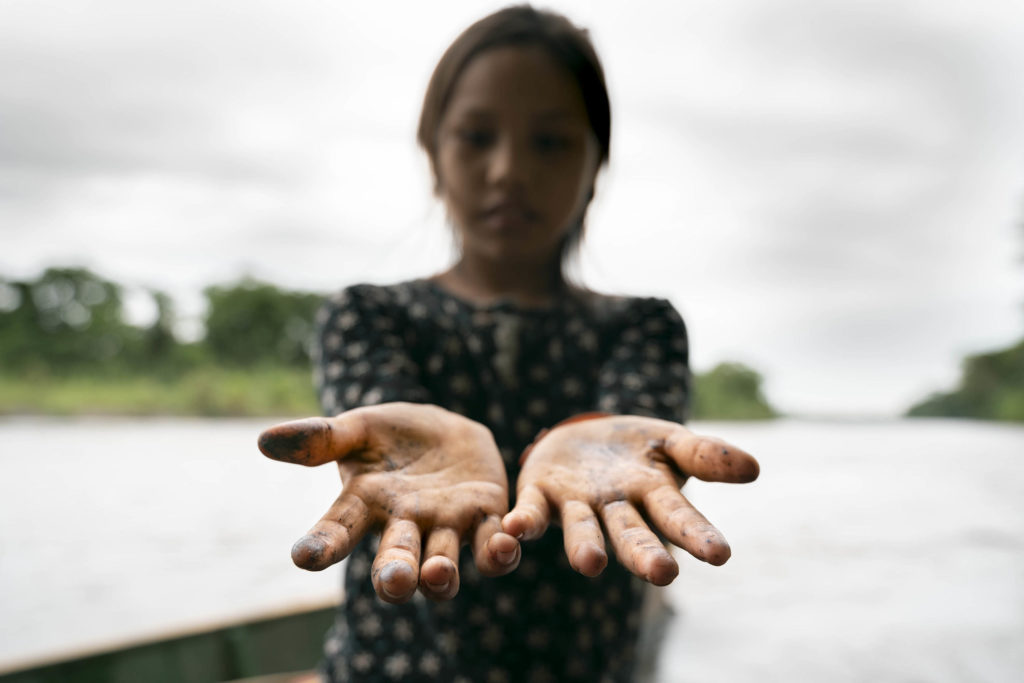 An oil spill contaminated the Napo and Coca rivers in Ecuador. It has added to the difficulty Indigenous communities have had during the pandemic getting access to food and clean water. Photo courtesy of Amazon Frontlines.

The Kofan community of Sinangoe, also in the northern Amazon of Ecuador, provides a hopeful example of legal victory for Indigenous rights. In 2018, the Kofan won a case that ordered a halt to all mining activities in their territories, and recognized their right to free, prior and informed consent to activities affecting the environment in their territory. Espinosa was also the lawyer for that case, representing the Kofan.

While Sinangoe may have legal grounds to protest mining, unfortunately illegal invasions continue. The community has responded by forming a community land patrol, or guardia, a well-organized group that monitors its territory. The community only has about 200 people yet their ancestral territory is over 62,000 hectares with lots of steep mountain slopes and the Aguarico River flowing throughout. To effectively patrol this area, the guardia utilizes technology such as camera traps, GPS mapping and drones.

“It bothers us because they are entering our territory and our home without our permission,” says Nixon Andy Narváez, coordinator of the Sinangoe land patrol. “They’re destroying everything we have: our territory, the river. They pollute, and then they leave behind trash. And when one of them comes here, the others start to come.”

Amazon Frontlines has been coordinating with the guardia to support their mapping and monitoring efforts. And Nixon Andy has been working with the Ceibo Alliance, an Indigenous NGO, to coordinate getting food, medicine and supplies to people. 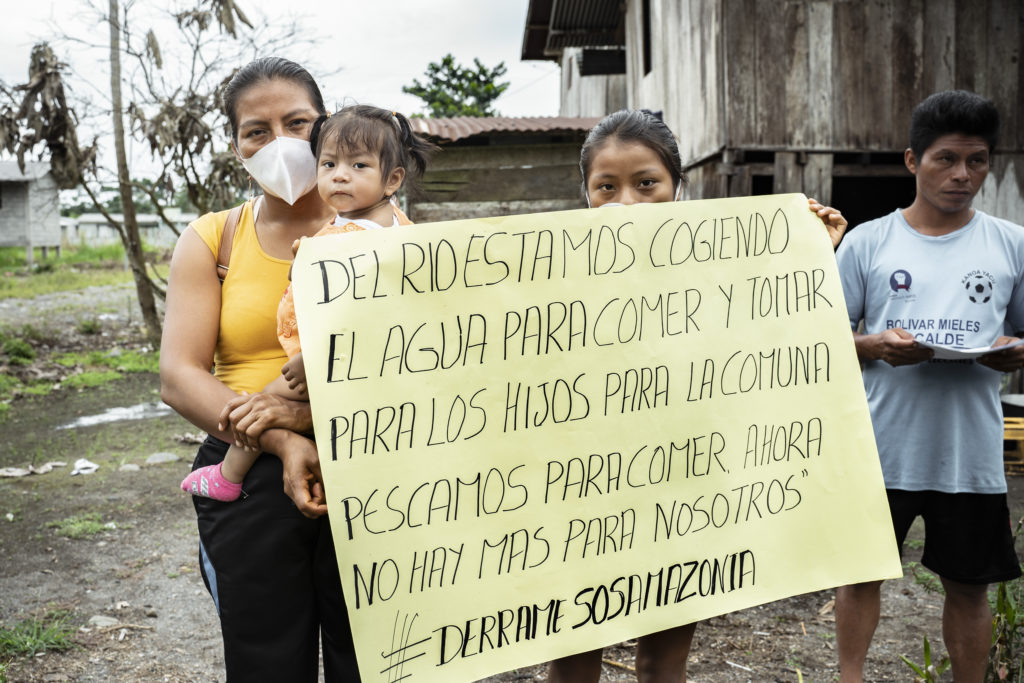 This all became more challenging when the community’s bridge collapsed in late April after heavy rains, making them even more isolated from services—and from any testing or care for COVID-19. Although as Mitch Anderson, founder and executive director of Amazon Frontlines, says, “The state’s response has been poor for many reasons. Principally, I’d say because Indigenous territory is largely beyond the reach of the effective state. It’s an issue of systemic capacity, infrastructure and government priorities.”

The Kofan have turned to canoe travel for surveying and supply runs, and to their knowledge of medicinal plants and the forest to keep their bodies strong.

“For these communities, COVID-19 has brought another existential threat on top of already existing existential threats to their territories, to their way of life and to their health from oil extraction, mining, government neglect, from a global economy, hell-bent on entering into the lands,” says Anderson. “The communities are really digging deep into their culture, into their history, into their lands, to find the cure for COVID-19 and stay safe.”

In the long term, that resilient spirit needs to be respected and met with strong land rights that acknowledge them as the rightful owners—the guardians of the biodiversity we all need to survive. Indigenous peoples should also have the right to consent to or veto projects affecting their territories. In early 2021, the Kofan will return to the courtroom before Ecuador’s Supreme Court, as their precedent-setting legal case has been selected to set national level jurisprudence on Indigenous Rights, with specific regard to the right to free, prior, and informed consultation for consent.

“We will continue protecting our territory because if we don’t protect it, no one will do it,” says Narváez. “As community guards, our initiatives are meant to protect our territory for our future generations and us to live in harmony.”