A team of scientists is experimenting with new research techniques in hopes of finding this South African species, lost to science since 1936.

How do you find a tiny animal that “swims” under the surface of sand dunes to get from place to place? This challenge has long stumped scientists studying any of the 21 species of golden mole; researchers could spend weeks watching for subtle shifts in the sand.

Although De Winton’s Golden Mole (Cryptochloris wintoni) is technically categorized as Critically Endangered by the IUCN Red List of Threatened Species, it has not been seen in its native South Africa since 1936 and is among GWC’s 25 most wanted lost species. However, it remains to be seen whether this is due to extinction from threats including mining and habitat destruction, or simply due to the difficulty of confirming its presence.

This September, GWC is funding an expedition by the Endangered Wildlife Trust (EWT) to search for the species, as well as its endangered cousin the Van Zyl’s Golden Mole (Cryptochloris zyli). Armed with unique methods that have never before been used to detect golden moles, the team hopes to shed some light on this mystery. 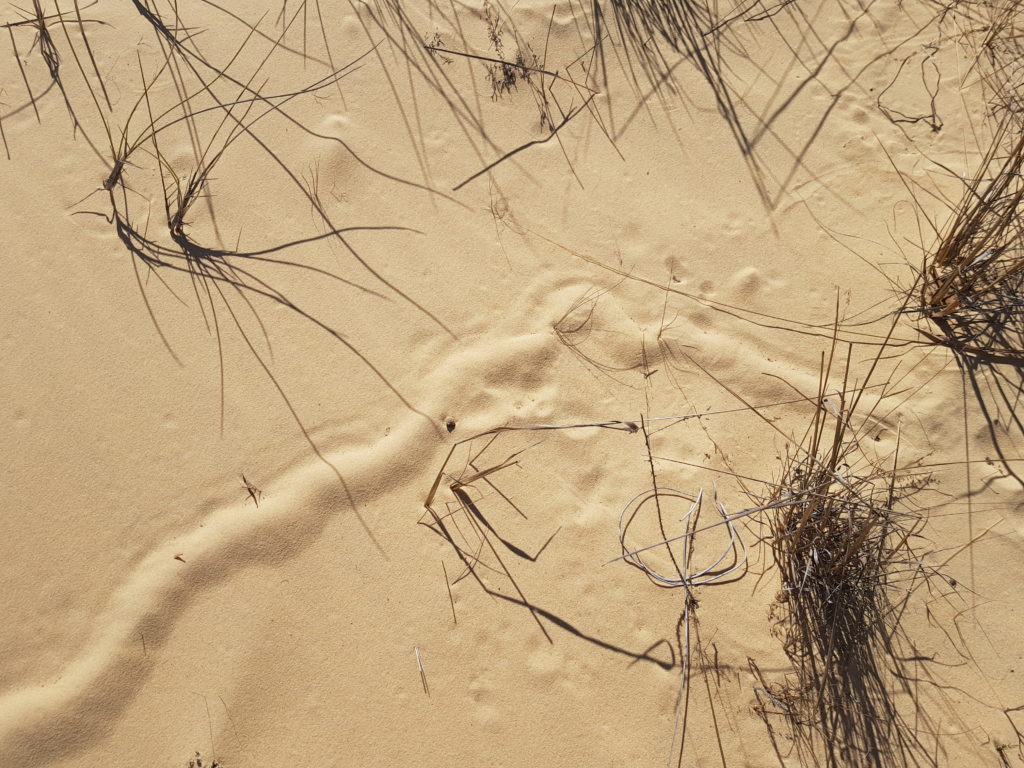 Golden moles, most of which are endemic to South Africa, are named for their iridescent fur resulting from an oily secretion their skin produces to make it easier for the moles to slide through their sand habitat. The unique skull shape of the Cryptochloris genus — which includes the De Winton’s and Van Zyl’s — enhances their hearing and allows them to sense minute vibrations in their environment. This helps them find prey, but also makes them harder for scientists to locate.

“One of the reasons De Winton’s and Van Zyl’s are so elusive is they are what we call swimming moles,” Cobus Theron, the program manager of the EWT’s Drylands Conservation Programme, explains. “They basically swim through loose sand close to the surface. Because of that, they don’t leave a characteristic tunnel. And most trapping methods are focused around putting traps in tunnels and then leaving and coming back the next day. That technique cannot work for these moles. So that’s why it’s so difficult to find them.”

Few studies have been done on golden moles, so it’s unknown whether their populations are growing or shrinking. However, it’s likely that human-caused habitat destruction through activities such as agriculture and mining have contributed to declining numbers of these species. Historically, De Winton’s Golden Mole has only been found in a very small area that is now the site of large-scale diamond mining operations.

In early September, a team of three researchers from the EWT will kick off their expedition in the Lambert’s Bay area of South Africa’s Western Cape province, an area known to have a high variety of golden moles. Although rediscovering the De Winton’s Golden Mole is the main goal, the team also hopes to find the Van Zyl’s Golden Mole — a similar species known only from a few samples gathered 18 years ago—and test out some new detection methods that should work for finding any species of golden mole.

Much of the team’s previous research has been devoted to the Riverine Rabbit (Bunolagus monticularis), another Critically Endangered species found nearby. “We are used to working with elusive animals,” Theron says, “and we want to apply that skill in a different environment and try something new, and also see if we can adapt technologies we are using.”

The main technique the researchers are hoping to use is environmental DNA (eDNA). “All animals shed their DNA as they go through the environment,” Theron explains. “Each species of golden mole has a unique DNA sequence. And we’re hoping some of this trace DNA will be found in the sand.”

After identifying raised paths or collapsed areas in the sand that may indicate fresh golden mole trails, the researchers will collect soil samples and send them to be analyzed at the University of Pretoria. Using DNA isolating techniques, the lab should be able to positively identify which species made that trail.

The team also hopes to experiment with two additional techniques. One is using a thermal camera mounted on a drone to detect moles by tracking their body heat. Theron had the idea after conducting some thermal imaging of Riverine Rabbits in 2018.

Because the moles travel just under the surface of the sand, this method is promising.

The third potential mole-detection method is to use a scent-detection dog — specifically Jessie, a dog belonging to EWT Specialist Conservation Officer Esther Matthew. Jessie is already used to find frogs and Riverine Rabbits, so Matthew thinks it will be a fairly easy transition. 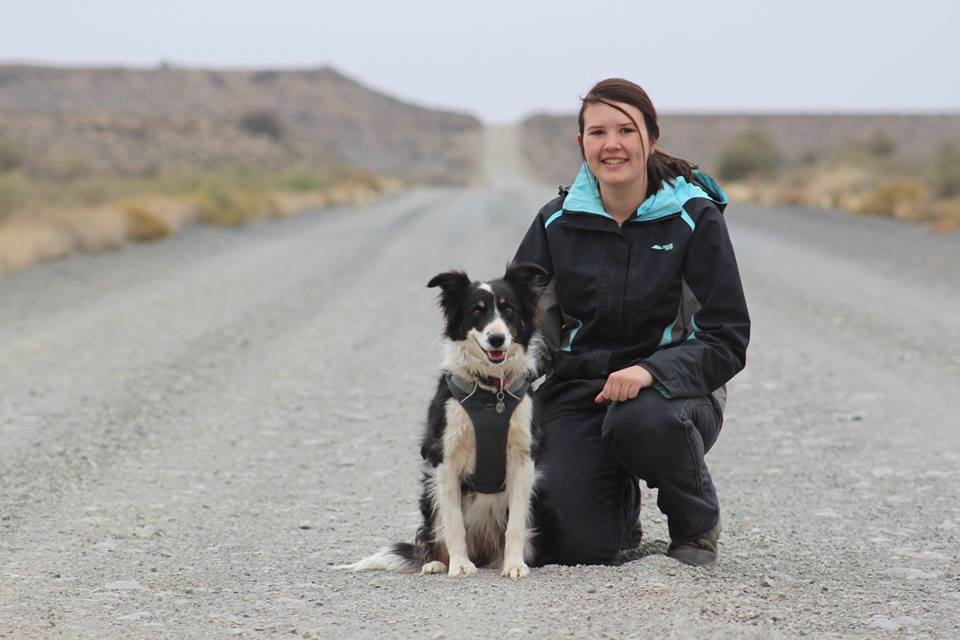 Jessie, a scent detection dog, and Esther Matthew, a member of the team of scientists that will look for De Winton's Golden Mole in September. (Photo courtesy of Sloane Munro.)

“The dog has been working for six years already, so it’s very easy to condition her on a new scent,” Matthew says. “And for the Riverine Rabbit, because it’s also such an elusive, Critically Endangered species, we had to use the scent from the roadkill. And we managed to teach her to find the live rabbits using only scent from roadkill.”

The team will start Jessie with the scent from the Cape Golden Mole, with the hope that she will then learn to pick up other golden mole species. 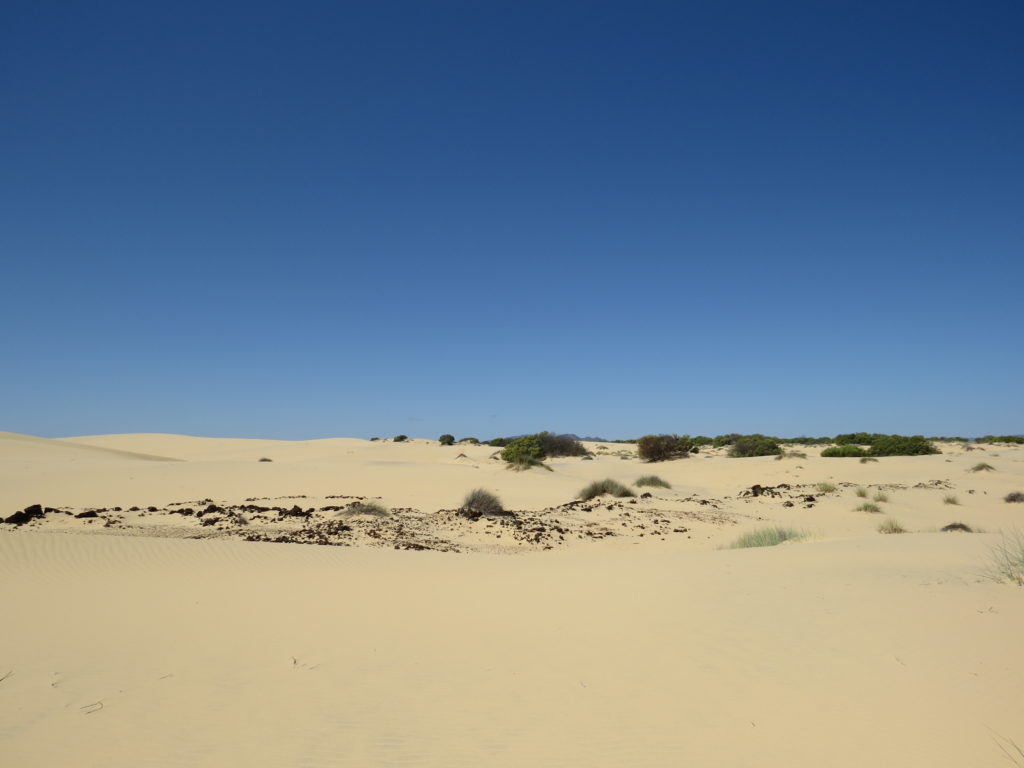 The dunes where conservationists are searching for the Golden Mole, which has not been seen in South Africa since 1936.

On a February scouting trip, the team identified six easily accessible farms that have seen mole activity in recent months; these will be the first research sites. The team will look for the moles in the mornings and evenings, when they are most likely to be active due to lower temperatures. The expedition is scheduled to last one week, but Theron says “If we’re not successful, we stay longer until we get it right.”

How optimistic is he about finding the lost species?

“One has to be realistic,” he says. “We are trying to do what has taken other researchers decades. We’re not going to walk up and dig it out on the first go. But that being said, they tried traditional approaches, and that’s the problem — those are very intense in terms of time and effort. If these new techniques work, we can get things done quicker and survey more sites without staying in the field for weeks and weeks.”

Theron is confident that at least one of the new research methods — or some combination of them — will work in improving rapid detection of golden moles. “To monitor and search one dune for three or four weeks … it would be much harder to find De Winton’s like that. You need to be going through 10 dunes in a week, and this exponentially increases your chances of actually encountering the mole.”

Who knows what the coming weeks will bring for this research team in the dunes of South Africa, but one thing is for sure: it will be a learning experience.

“All of these things, they are experiments,” Theron says. “And that’s what makes it exciting. If we don’t try something new, the species will remain a mystery to us.”

To see live updates from the golden mole expedition in September, check out the Endangered Wildlife Trust’s Instagram page.