The COVID-19 pandemic has taken a tragic toll on human lives across the globe. In Indonesia, it’s also impacting one of our closest relatives.

The Sumatran Orangutan (Pongo abelii) is already listed as Critically Endangered by the IUCN Red List of Threatened Species; habitat destruction and the illegal pet trade are the biggest threats to its survival. Now, the pandemic is making it harder for Sumatra’s only orangutan reintroduction program to continue crucial conservation work. But support from a new crowdfunding campaign — spearheaded by our partners on the ground — aims to keep it going.

At its rescue and rehabilitation center near Medan, North Sumatra, the Sumatran Orangutan Conservation Programme (SOCP) cares for dozens of orangutans, mostly young animals confiscated from the pet trade who have witnessed their mothers die at the hands of their captors. Normally, these animals are nursed back to health, isolated to prevent disease transmission, socialized with other animals — often for the first time since their capture — and then released at one of two protected areas on the island that the SOCP team has found suitable for reintroduction.

Scientists don’t yet know if orangutans can contract the coronavirus, but as they share 97% of their DNA with humans, SOCP is taking no chances. So far, there have been no known recorded cases of COVID-19 in either human or orangutan at any SOCP site, though the staff continues to follow strict quarantine and hygiene guidelines. 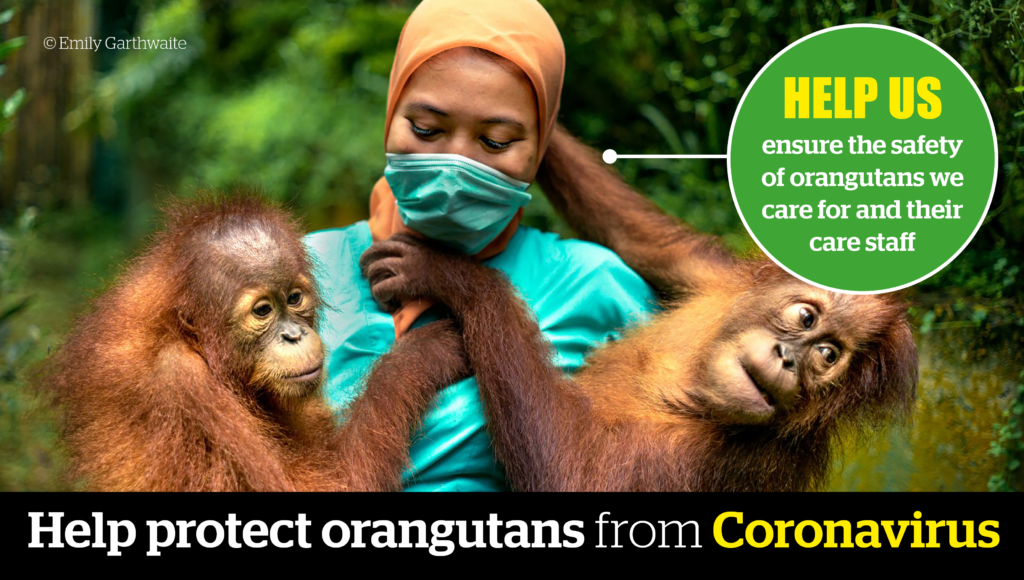 Due to lockdown measures that would make transporting and monitoring wild orangutans difficult, all reintroductions are on hold for the moment. This means the rescue and rehabilitation center is currently hosting 76 orangutans — about 50% more than normal. As a result, the animals require 50% more food, medicine, cleaning and staff time, yet the facility’s staff has been temporarily reduced as much as possible to minimize human contact and the likelihood of infection or transmission. As SOCP Director Dr. Ian Singleton explains, “Minimizing the risks to both orangutans and staff has meant significant extra challenges and expenses, unforeseen and unbudgeted for at the beginning of the year.”

Crowdfunding donations will help pay for daily essentials at SOCP’s rehabilitation center, including food and medicine for the orangutans and personal protective equipment (PPE) for their caregivers. In doing so, supporters will help sustain what is likely the world’s only program to successfully establish entirely new, genetically viable and self-sustaining wild populations of any great ape species.

Because the previous orangutan populations had long since disappeared at both reintroduction sites before the project began, SOCP was tasked with creating new groups based on the personalities of the animals. 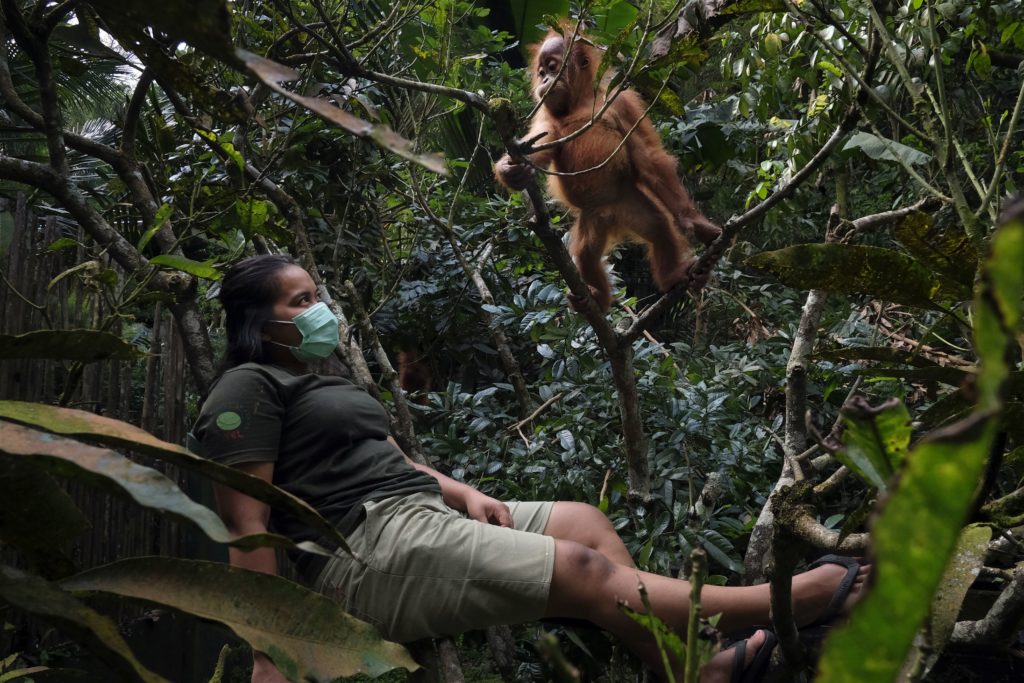 “We see which are dominant, which are subordinate, which are smart and retain skills learned in the wild, and which need more time to learn,” says Singleton. “Using these observations, we are able to establish small groups of compatible individuals who then make the trip together, meaning they have familiar buddies along to minimize the stress of release.”

The animals are extensively monitored before, during and after release to ensure that they are adjusting well to their new forest home.

So far, over 185 orangutans have been reintroduced at the edge of Bukit Tigapuluh National Park, and more than 127 in the Jantho Pine Forest Nature Reserve; both populations are now reproducing naturally.

“Our goal is to eventually have at least 250 surviving reproducing orangutans in each location, to ensure genetic viability and to maximize the long-term survival prospects for the new populations we are creating,” Singleton says. “These new populations not only dramatically expand the geographic distribution of orangutans in Sumatra but also act as a ‘safety net,’ should catastrophe befall the remaining naturally wild populations.” 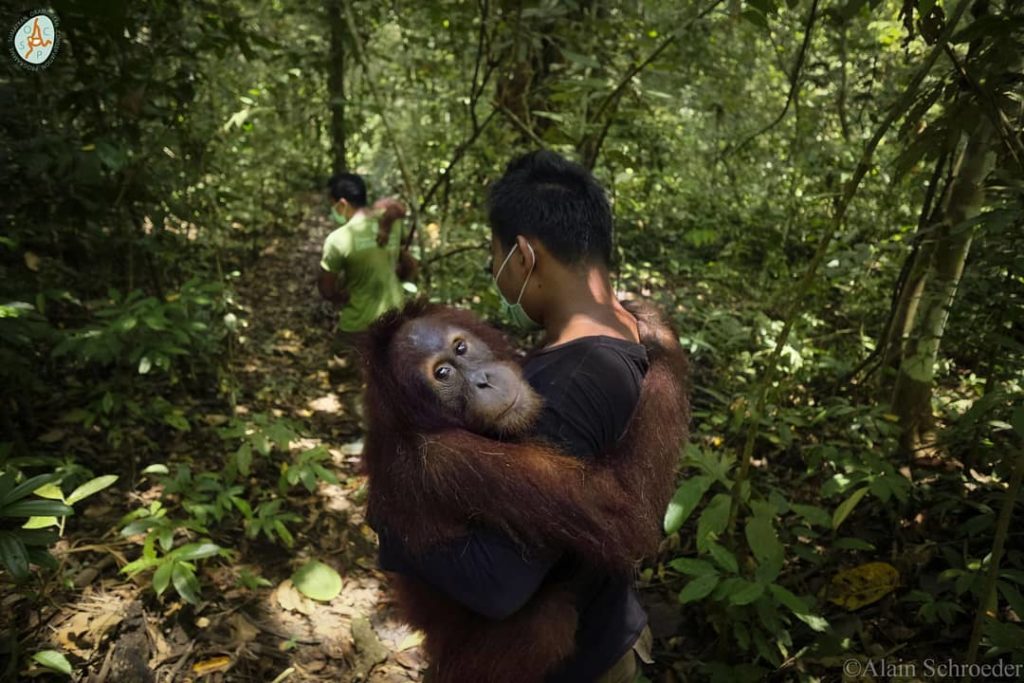 For a species with only around 13,500 individuals left in the wild, the success of this program could be the difference between survival and extinction. Please donate and help SOCP continue their work to secure a wild future for this remarkable great ape.

Donations to the SOCP are being handled by various charitable partners, including The Ecology Trust in the UK. The Trust also hosts the Leuser Ecosystem Action Fund (LEAF), whose mission is to protect these unique forests, and connect conservation groups to new sources of funds. See LEAF's latest newsletter for more information including details of work supported via a recent grant from GWC.