Grassroots Plan Sprouts to Protect the Forests of Indio Maíz

As the political and human rights crisis in Nicaragua continues to make headlines globally, another kind of story is unfolding on the Caribbean coast in the southeast corner of the country—a story about the type of resiliency and leadership that can reshape the course of history for its people, its wildlife, and the planet.

In April, the Rama and Kriol communities of Nicaragua’s Indio Maíz Biological Reserve traveled to Managua to launch a novel conservation action plan to bolster protection of their ancestral lands in Indio Maíz, which constitutes the core area of one of the five largest forests left in Central America and critical habitat for a number of threatened and emblematic species, including Baird’s Tapirs, Jaguars, and White-lipped Peccaries. Since then, the Rama indigenous people and afro-descendant Kriol communities of Indio Maíz—who led the efforts to create the visual, grassroots action plan—have started putting the plan in action, building on their generations of commitment to conserving the forests that sustain them and the animals that share their home.

“Around the world, the political situation in Nicaragua has been heard and seen for many years,” says Princess Barberena, a community leader in the Kriol community of Greytown.“But on the other side of history is that a minority of the population is struggling to defend Mother Earth. This is more than a commitment to me. " It is an obligation to keep struggling to be included in Nicaragua’s development process, to prevent natural resources from being destroyed, to secure black and Indian communities’ human rights, to fight for the communal lands rights, and especially to obligate the central government to start the restoration efforts in the Rama and Kriol territory, including removing the illegal ranchers who shouldn't be there and helping the forest regrow.”

Indigenous peoples play a key role in protecting biodiversity across the planet. They are the stewards of nearly a quarter of Earth’s surface and safeguard up to 80 percent of its biodiversity. In Indio Maíz, the Rama and Kriol communities have been battling threats to the reserve that have largely resulted from the lack of willingness by the central government, despite signed agreements, to help protect it: primarily a wave of colonization by illegal, non-indigenous squatters attempting to clear the reserve’s forests to establish cattle ranches.

“There are many projects with indigenous peoples and conservation, but what we’re seeing in Indio Maíz is really innovative,” says Chris Jordan, GWC’s Central America and Tropical Andes coordinator. “We’ve helped the indigenous government implement SMART to monitor poaching, trained rangers to patrol, trained a local accountant and set up a financial system, then worked with the indigenous communities to create a conservation action plan that is based on their priorities, values and traditions to guide them in their efforts,” Jordan says.

“I think it is an approach that can and should be replicated in other indigenous territories across Central America.”

The latest development—the approval and launch of the conservation action plan—was born out of Nicaragua’s comprehensive Autonomy Statute that legally empowers local indigenous and Afro-descendant people to manage and protect the natural resources of their territory, which was legally titled in 2009. But instead of creating the kind of complex and overly technical action plan that only scientists can understand and that often ends up sitting on a shelf in an office, the Rama and Kriol communities set out to do something novel: develop a community-based action plan that is concise and easily accessible to all kinds of audiences, regardless of language, level of literacy and degree of scientific knowledge. The communities of Indio Maíz asked GWC to help facilitate this process. 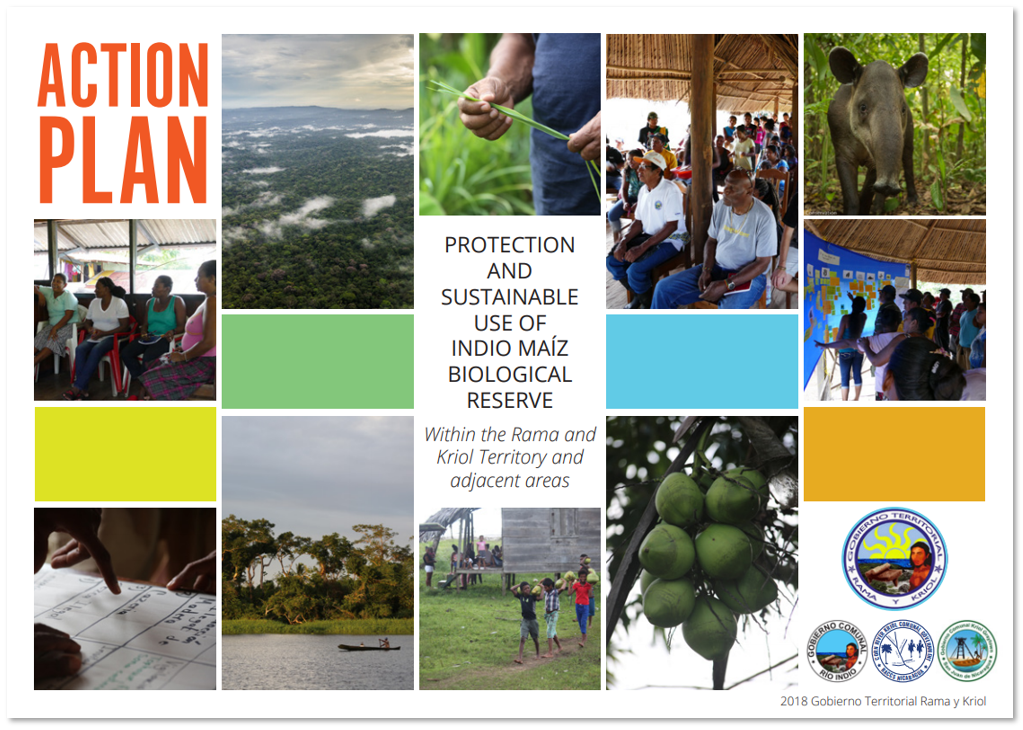 GWC has a long history of working with the communities in Indio Maíz and in 2017 started a three-week consultation process that included a series of meetings and workshops with members of the Rama and Kriol communities in Greytown, Corn River and Indian River to gather input for the plan. The communities identified the threats to Indio Maíz , their values as they relate to their natural heritage, and their ideas for protecting the reserve.

“This plan was developed through a comprehensive bottom-up process, through which local people were able to gather in their own towns and villages, discuss and document what needs to be done to protect their shared values and defend against the facts that threaten them,” says Mike Appleton, GWC director of protected area management. “For a plan like this, the process is as important as the product.”

The end result is an action plan that outlines how to: 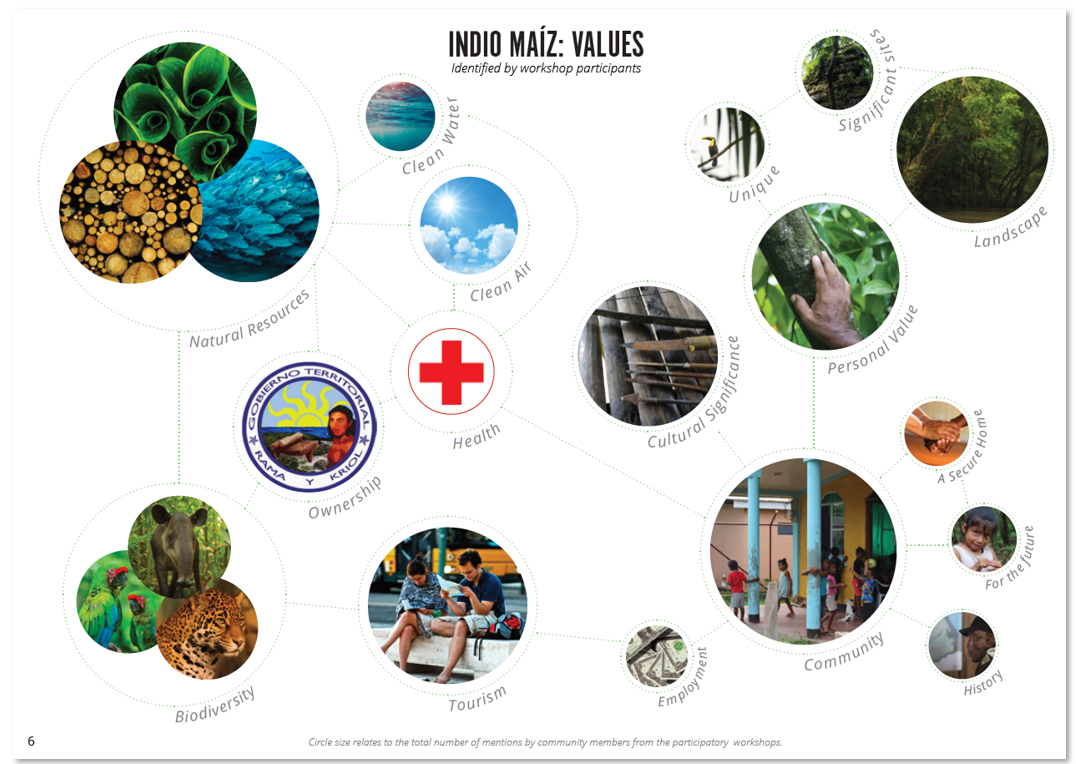 “I loved the idea of doing something that would be visually rooted in, and have appeal for, the complex combination of cultures of Indio Maíz. It sounded like a great challenge,” says Carrie Stengel, GWC’s data and metrics manager. “I tried to use colors and photos that people would relate to or recognize even if they don’t read or have a scientific background. It’s a functional tool—by the community, for the community. All of the information is digestible in one view so  someone can get a pretty full sense of what needs to be done, topic-by-topic.”

This action plan marks the first initiative of any of the 23 indigenous and Afro descendent territories to develop an autonomous conservation plan of this kind for their territory in a protected area. GWC is hoping to replicate pieces of this for projects we support in the Darien region with Emberá communities and in the Honduran Moskitia with Miskitu and Pech territories.

“In Nicaragua, the local communities almost never know about the protected area management plans,” says Armando Dans, a GWC associate conservation scientist. “By creating an autonomous community-driven plan that contains a protection component and promotes the sustainable use of land, the Rama and Kriol communities are ensuring that this highly diverse landscape remains a critical stronghold for biodiversity, to the benefit of all life on Earth.”

Carrying out the full scope of the action plan will require additional funding and a systematic increase in capacity of the communities to protect Indio Maíz. GWC is helping find this funding by partnering with local NGO, the Nicaraguan Foundation for Economic and Social Development, to assess the economic potential of financing mechanisms for the communities, including carbon-based options, payment for environmental services, compensation payments from companies, and ecotourism.

For the indigenous communities whose territories overlap with Indio Maíz, protecting the reserve is as much about looking forward as it is about honoring the past.

“Indio Maíz is the natural patrimony that our ancestors left for us, which means living in harmony with the environment and using resources sustainably,” says Jossely Flores, a Rama community leader from Indian River. “Indio Maíz is also our life because it provides for us the goods and services that allow the Indigenous Rama peoples to survive daily. I am committed to Indio Maíz's future to reclaim our rights, prevent and reduce the illegal human activities that deteriorate the natural resources in the reserve, and also to ensure that future generations see what our ancestors left for us and continue to conserve it.”