Before their expedition, we blogged about the new techniques the team planned to use to search for these elusive moles. So, how did it go?

The team spent a week in Lambert’s Bay in the Western Cape searching for golden moles using three novel techniques: eDNA, thermal imaging and scent detection using a trained sniffer dog. “We were on the dunes every morning from five o'clock onwards and every evening into the night,” recounts Cobus Theron, the program manager of the EWT’s Drylands Conservation Programme.

While this brief but intense expedition didn’t unearth any sign of either species, all three new mole-finding techniques showed promise for future discoveries. The team did find evidence of mole presence — including a live golden mole.

The team found a particularly active area in the dunes and decided to spend time observing this area. The mole took its time making an appearance, but it was worth the wait. “Golden moles move along the surface under the sand, and occasionally they come out,” Theron says. “We happened to observe this one area very closely for a number of days, and then eventually we saw movement and it was this dude, whom we christened Mikey the mole.” 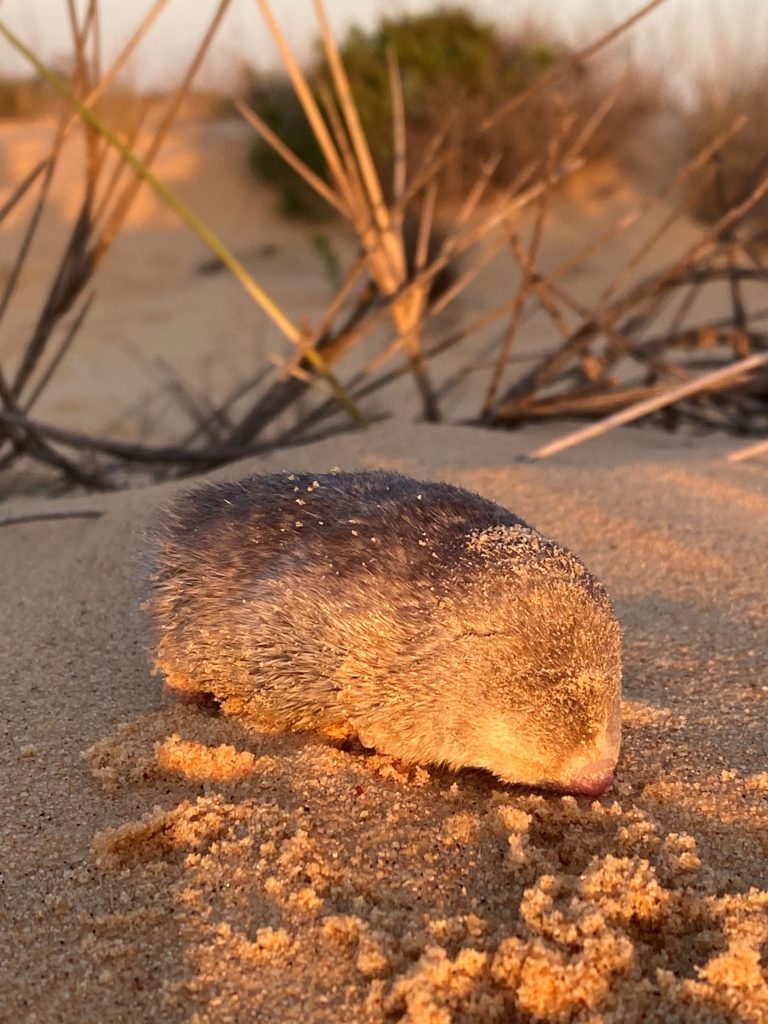 Because many species of golden mole look similar, the team relied on an eDNA sample to correctly identify the species — possibly the first time this process has been used on moles. Although they initially suspected it might be a Van Zyl’s, the individual was confirmed to be a Grant's Golden Mole (Eremitalpa granti), a species listed as Vulnerable by the IUCN Red List of Threatened Species. But as EWT Specialist Conservation Officer Esther Matthew explains, this isn’t bad news.

“This is very exciting, as the Grant’s Golden Mole is very similar in appearance to De Winton’s Golden Mole, so in a sense we got a glimpse of that we are looking for,” Matthew says.

The team took 99 other soil samples from fresh golden mole tunnels during their trip, thanks in part to the weather. “We were fortunate that it rained quite nicely two days before we had arrived,” Theron says. “Because the moles tunnel through sand, their tunnels normally collapse quickly. But due to the rain the chambers we found were intact, meaning that we were able to scrape the inside of the chambers and collected potential eDNA soil much better than we would have otherwise.”

Most of the eDNA samples are still awaiting testing to confirm mole presence. “It's a highly complicated process,” Theron explains. “I'm sitting with 100 samples in my freezer, and I am 2,000 kilometers away from the university. Later this week, I have to try and figure out how to get these things in a frozen state to the university. Every time they thaw, the DNA breaks down.” 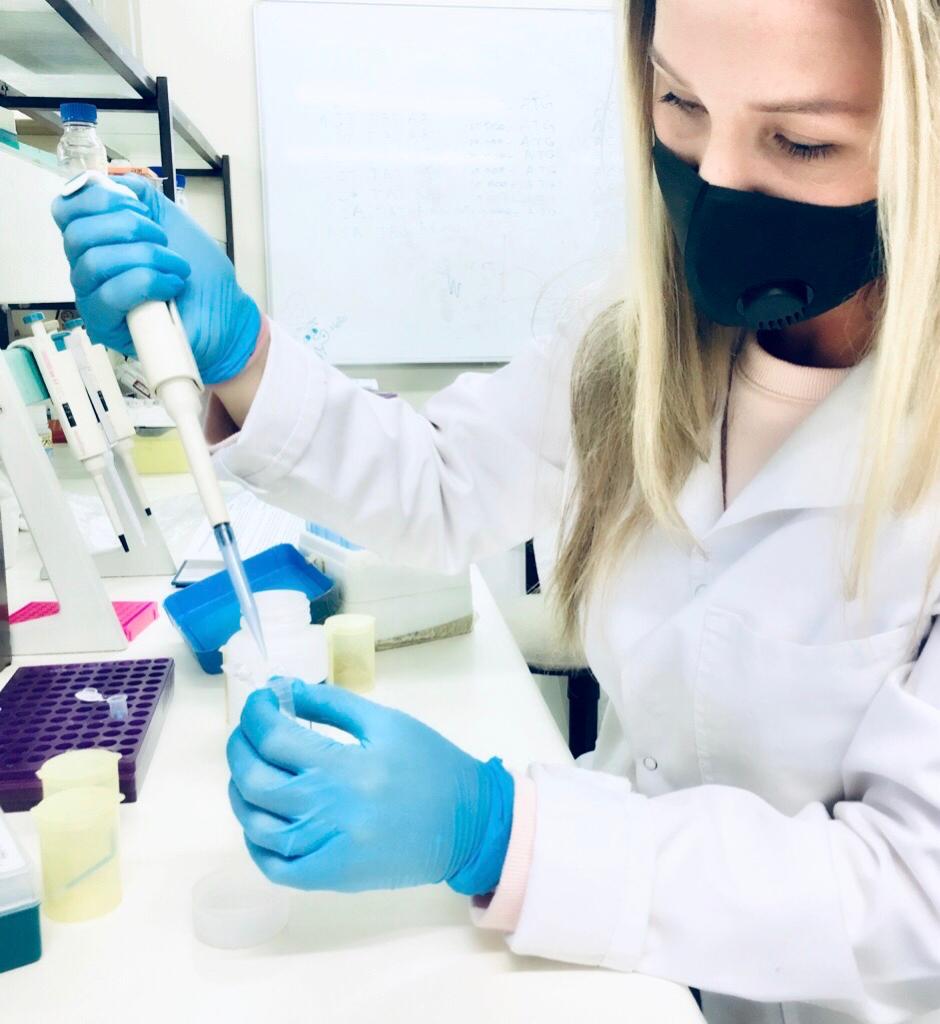 Since then, the sample arrived safely (and still frozen) at the University of Pretoria, where Dr. Samantha Mynhardt began the lab work. Four of the soil samples have already been analyzed; golden mole DNA was found in two of them, but at very low concentrations. The team now needs to take additional steps to magnify or strengthen the samples before species identification can be made. Overall, the extraction techniques are working well to obtain DNA from soil samples.

The thermal camera proved to be the most challenging tool to use for mole detection. “Initially, it's quite difficult to spot the trails of the moles because you have to learn what the signature looks like,” Theron says. “But after some time, we were able to distinguish it.” The discovery of the live golden mole also allowed the team to take thermal footage of a mole. They will have to consider the applicability of the technique going forward. 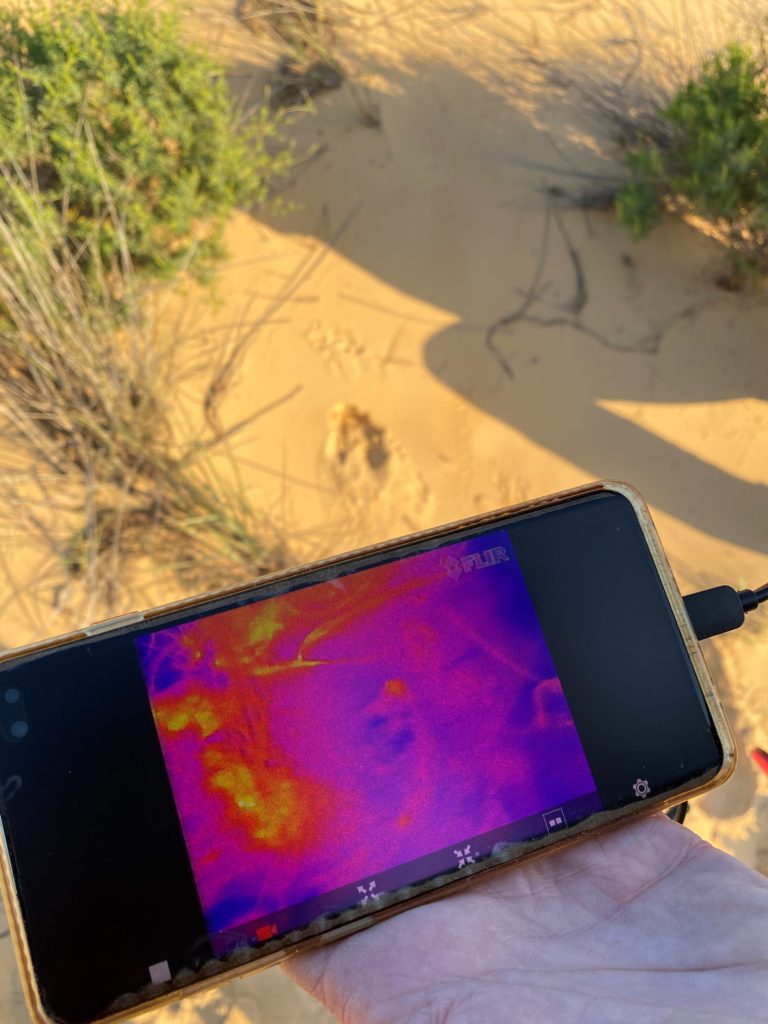 The team also made progress on training their canine member, Jessie the border collie, to sniff out the golden mole tunnels. “Jessie is very high energy, but she is a very intelligent dog,” explains Matthew, who is Jessie’s owner and handler. “Following scents is her favorite thing to do — plus she also gets rewarded for doing her job by playing with her tennis ball.”

Matthew collected soil samples from around the area where the live Grant’s Golden Mole was found and taught Jessie to indicate when she smells it by lying down. The hope is that once she has learned the scent of a specific species (like De Winton’s), she will ignore any other mole activity and only go after the species the team is searching for — though of course this is tricky when you are searching for species with such a limited scientific record. There hasn’t been a verified sighting of De Winton’s Golden Mole since 1936, and Van Zyl’s has only been collected four times, the last time in 2003.

Due to the coronavirus pandemic, the team had to shift the fieldwork dates by six months. Early next year they hope to visit Port Nolloth, another town up South Africa’s western coast, to start identifying sites for future surveys in the De Winton’s Golden Mole historical distribution area. “We've now discovered that the rain is highly beneficial to collecting eDNA,” Theron said. “As a result, we might have to move the dates around according to the weather predictions of our next official expedition.”

To help boost the odds of finding the lost species while raising awareness in nearby communities, Theron hopes to eventually involve locals in the search. “We need to be very careful not to try and incentivize people to find them, but instead say, ‘If you find one, then this is what you should do, here are all the tools, here are our contact details.’” The project may one day expand to hiring young people who live nearby to be “dune rangers” who would help collect specimens, educate their neighbors and start to properly map these areas where the moles had been found to lay the groundwork for habitat protection.

Overall, Theron is pleased with the amount of progress his team made in a mere week of research. “In my estimation, the chances of us finding the target species are much higher than I previously thought … I think we haven't been looking for these things in the right places or using the right techniques.”