Eight Things You Should Know About Water Frogs

Did you know that April 1 is the first-ever World Water Frog Day? Yep, it’s a thing!

We are all practicing strict social distancing due to the spread of the novel coronavirus (COVID-19), so we’re celebrating with a virtual party full of our favorite frog facts.

Before we begin our countdown, you may be wondering, “Who are these water frogs and who threw this party for them?” Excellent question. Water frogs – specifically the Telmatobius genus – are unique aquatic and semi-aquatic frogs  that are among Global Wildlife Conservation’s focal groups of species. The vast majority are endangered. 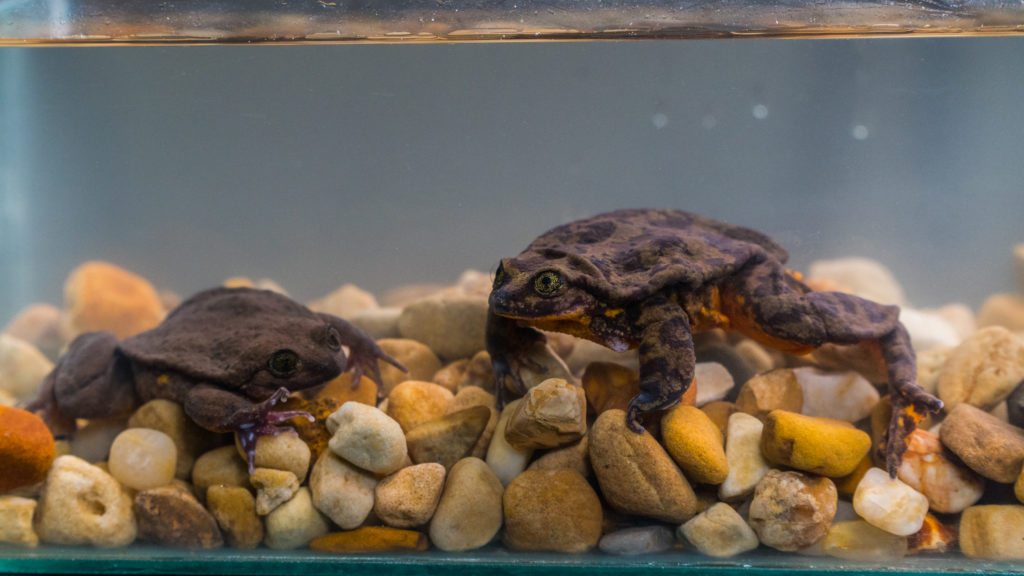 World Water Frog Day is an effort by 10 conservation organizations, including GWC and our partners such as Alcide d’Orbigny Natural History Museum, to bring awareness to water frogs and the unique survival challenges they face.

So sit back, relax, and learn what makes water frogs so unique and important to save.

Water Frog Facts That Will Wow You!

Water frogs don’t travel far. All 63 water frog species hail from the Andean highlands in South America. While you can find water frogs along the western edge of South America from Ecuador to Northern Chile and Argentina, each species tends to stick to a small range. For example, the critically endangered Inquisivi Water Frog is only found in two Bolivian streams. For conservationists working on captive breeding programs, getting each species’ water temperature and quality right can be one of the biggest challenges.

Water frogs love cold water. Forget a warm bubble bath. For most water frogs, an icy mountain stream is a relaxing dip. The Titicaca Water Frog loves to lounge in waters of 8–17.5 degrees Celsius (46.5–63.5 degrees Fahrenheit). After Teresa Camacho Badani, chief of herpetology at the Museo de Historia Natural Alcide d’Orbigny, rediscovered the Sehuencas Water Frog in a remote stream in a Bolivian cloud forest, she said, “One of the hardest things about our expedition was that our hands kept going numb under that cold water!”

Water frogs are romantic. Romeo, the world’s loneliest frog, made international headlines when Camacho Badani and her team finally found him a mate – his Juliet. From 2009 to 2019, he was feared to be the only one of his kind. Since Juliet moved into his tank, Romeo has been sharing his worms and doing a mating dance. No word yet on any tadpoles.

Telmatobius niger is one of three water frog species in Ecuador that is possibly extinct. (Photo by Luis Coloma/Centro Jambatu)

Water frogs are mysterious. The Telmatobius genus is one of the most threatened groups of amphibians in the Andes, and information about water frog species is scarce. Three species of water frogs may be extinct in Ecuador alone, including the Vellard’s Water Frog, which has been lost to science since 1968. Not only are water frogs’ numbers dwindling, but many of those who are left are hard to find. They live buried under rocks, in icy streams, at high elevations in remote cloud forests. Conservation researchers throughout South America are collaborating to share their insights and advance the world’s collective knowledge.

Water frogs are being evicted from their homes. Agricultural expansion and other human development is cutting down cloud forests and encroaching upon water frogs’ habitats. These activities also contribute to climate change – another factor threatening water frogs’ homes. In 2019, Andrés Charrier, a herpetologist from the Chilean Herpetological Association, discovered that the Loa Water Frog’s creek habitat had completely dried up. A small team of experts were able to swiftly evacuate 14 of what are among – if not the—world’s last Loa Water Frogs.

Water frogs are sensitive to pollution and disease. Water frogs’ permeable skin absorbs any pollutants in lakes, rivers and streams. Water frogs are also highly susceptible to chytridiomycosis, an infectious disease that is caused by the chytrid fungi and has decimated amphibian populations worldwide. About 10,000 Titicaca Water Frogs were found dead in Lake Titicaca in 2015 in Bolivia as the result of pollution, spurring the Alcide d’Orbigny Natural History Museum to start a conservation breeding program in their K’ayra Center.

Water frogs do NOT belong in your smoothie. Human consumption is one of the biggest threats facing water frogs. People throughout South America use them for food and medicine. An in parts of Peru, people blend the Titicaca Water Frog into a juice, believing the concoction is an aphrodisiac and will cure conditions ranging from asthma to osteoporosis. More than 4,000 frogs were confiscated from public buses traveling from southern Peru to Lima in late 2019, and thousands more have since been seized from markets.