While the forest has long been used by nearby villages for subsistence activities such as hunting, gathering, fishing and small-scale agriculture, its proximity to Cameroon’s big cities makes it an easy target for poachers looking to sell bushmeat at high prices to urban residents. A protected area has been proposed to safeguard the region’s wildlife, yet that designation remains in limbo; in the meantime, palm oil plantations are encroaching on the forest, and the government is also considering two logging concessions that would destroy much of the habitat essential to the wildlife there.

Here are a few of Ebo Forest’s unique residents. Ramping up protection for this special place hand-in-hand with its local communities is paramount.

Although the Nigeria-Cameroon Chimpanzee (Pan troglodytes ellioti) is the least-studied of the four Chimpanzee subspecies, the little research that has been done has brought exciting insights on tool-use by the great apes. Ebo Forest’s Chimpanzee population uses sticks to “fish” for termites and hammer-like quartz stones and wooden ‘clubs’ to crack open coula nuts. Both actions have been observed elsewhere, but this is the only place where the same great ape population exhibits both behaviors. Since no nearby Chimpanzee populations have been seen cracking nuts with stones, it’s likely that individuals in each place came up with the idea independently.

While all types of chimpanzees are classified as Endangered by the IUCN Red List, Nigeria-Cameroon Chimpanzees are considered to be the most threatened, with only between 3,500 and 9,000 individuals left in the wild (about 700 of which live in Ebo). (Video courtesy of San Diego Zoo Global)

Only confirmed by scientists in 2002, the Gorilla population of Ebo Forest was a somewhat surprising discovery, as they live in a 40-square-kilometer (15-square-mile) area of forest that is 200 kilometers away from the closest neighboring Gorilla population. 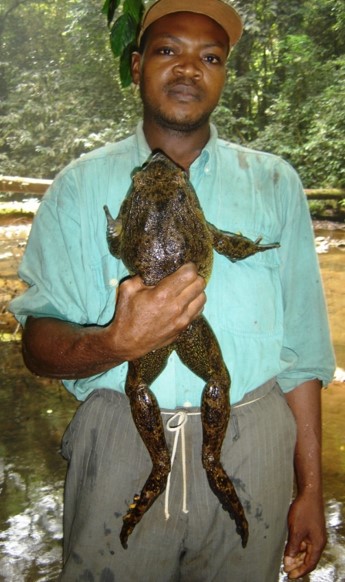 These cat-sized amphibians have been around for 250 million years, making them older than the dinosaurs. Although their size — up to 75 centimeters (29.5 inches) long, including their legs — has made them famous beyond their home region of western Africa, the world’s largest frogs are very shy, and thus much is still unknown about their behavior. However, recent research may give a clue about why the frogs are so massive: they build ponds for their future offspring by moving heavy rocks that can weigh more than half their body weight. Another fun fact: Goliath Frog (Conraua goliath) tadpoles are the same size as adult frogs of other species, they just keep growing!

Ebo Forest with its fast-flowing rivers provides important habitat for the Goliath Frog, which is listed as Endangered by the IUCN Red List. Like other amphibians, Goliath Frogs are good indicator species of the health of their ecosystem. One possible reason for their decline may be hunting by humans for food; the more adult frogs are hunted, the fewer are left to reproduce. (Photo by Ekwoge Abwe, San Diego Zoo Global)

Forest Elephants (Loxodonta cyclotis) are smaller than their Savannah Elephant cousins, allowing them to cut through the dense foliage of Central Africa’s tropical forests. In fact, the animals act as “gardeners” of the forest. Researchers have found that they are the most important seed disperser of all Congo Basin species, though their range extends beyond the Basin into Ebo Forest.

Forest Elephants congregate by the dozens in mineral-rich clearings called bais — a behavior that makes them vulnerable to poachers. Between 2002 and 2013, Forest Elephant populations declined by an estimated 65 percent, putting them in real danger of extinction within a few decades if serious action is not taken against the ivory trade.

Surveys indicate that Ebo Forest probably holds a very small, transitory, population of Forest Elephants. For a species as threatened as this one, every individual animal counts. (Video courtesy of San Diego Zoo Global)

Ebo Forest is home to one of the only two remaining populations of Preuss’s red colobus (Piliocolobus preussi), a Critically Endangered monkey that ranks among the world’s most threatened primates. Because these monkeys are large and slow-moving, and tend to hide (poorly) in trees rather than fleeing humans, they are especially susceptible to hunting.

Since two-thirds of the 19 species and subspecies of Red Colobus are classified as Endangered or Critically Endangered by the IUCN Red List, the primate group is among Global Wildlife Conservation’s top conservation priorities. (Photo by Robbie Whytock, San Diego Zoo Global)

About 80 percent of the world’s Drills (Mandrillus leucophaeus) are thought to live in Cameroon — and Ebo likely harbors one of the largest populations with the strongest chance of long-term survival. This large terrestrial primate enjoys the shelter of closed canopy forest, rarely venturing into farmland or degraded forest; this makes the species especially vulnerable to habitat fragmentation through activities like palm oil cultivation, which can lead to small Drill populations isolated from each other by deforested land.

Hunting is also a big threat, as the ground-dwelling monkeys are easy prey to poachers with hunting dogs. The Drill is classified as Endangered by the IUCN Red List, but actions such as a ban on hunting with dogs in the area could help this species recover. (Photo courtesy of San Diego Zoo Global)

This odd-looking, usually silent bird lives in isolated pockets of forest across Central Africa, often in caves or rock overhangs near running water. Grey-necked Rockfowl (Picathartes oreas) spend many months building mud nests for their offspring, and often return to and build off of the same nests year after year. Because the Grey-Necked Rockfowl is very sensitive to changes in its environment, it can be seen as a bellwether for the health of its habitat. The species is currently classified as Vulnerable by the IUCN Red List. (Photo by Robbie Whytock, San Diego Zoo Global)

With their flashy red tails and gregarious squawking, Grey Parrots (Psittacus erithacus) are hard to miss when they fly over the Cameroonian forest. But these birds are disappearing from their native habitat across Central Africa. Grey Parrots are incredibly intelligent and good at mimicking human voices, which makes them a popular (yet high-maintenance) pet in Western countries—and therefore among the world’s most trafficked bird species. The Grey Parrot is currently listed as Endangered by the IUCN Red List. (Photo by L.Miguel Bugallo Sánchez, via WikiMedia Commons)

Animals aren’t the only wildlife that can be “lost” for decades. After the plant genus Pseudohydrosme was first described in Gabon in 1892, it wasn’t observed again by scientists until 1973. This genus was believed to include only two species — both large, bizarre plants native to Gabon but seeming better suited to science fiction. However, in 2018 a third species was discovered in Cameroon’s Ebo Forest; the species awaits scientific description. (Photo by Xander van der Burgt, Trustees, RBG, Kew)