Devil’s In The Details: Devil Ark Discovers The True Taz

When The Looney Tunes Show debuted Taz on its eighth episode, it depicted an animal drawn to chaos and driven by a destructive temper, often resulting in a hurricane-like tailspin. Although clearly a fictional character, these features became the prevailing perception of the entire species.

Tasmanian Devils certainly have a chaotic side, biting and scratching and fighting one another, but only by getting to know the true Taz has GWC partner Devil Ark been able to successfully care for and breed the endangered species, according to Tim Faulkner, general manager and head of conservation at Devil Ark.

“The devil is so misunderstood,” Faulkner says. “A wild devil doesn’t actually bite upon contact with humans. It freezes. They’re really shy, really timid. They’re creatures of the night that stay close to the ground, have poor eyesight and use their whiskers to get around. That’s the devil you fall in love with.”

And there’s much to love even beyond the devil’s temperment: As a native predator, Tasmanian Devils help control feral cats and foxes that threaten other endangered and endemic species in Australia. They are also helping scientists understand how to best fight off antibiotic-resistant superbugs in humans. From August through December of 2015, Devil Ark collected milk from up to 10 devils once a month for the Sydney University study, which found in the milk six important peptides that fight bacteria. 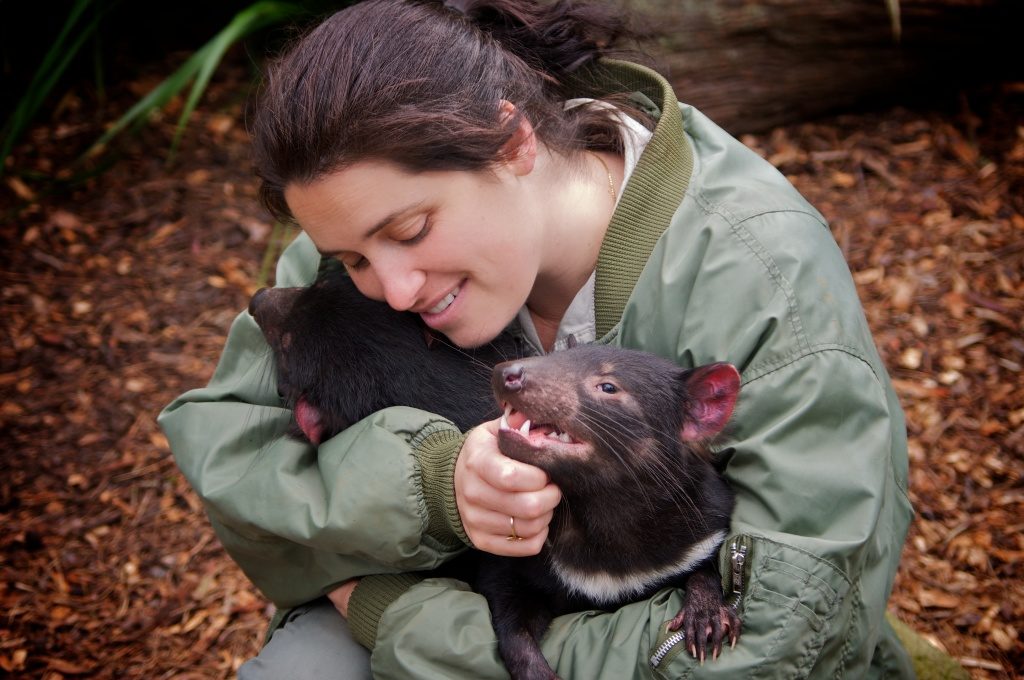 Devil Ark launched in January of 2011 with the arrival of 44 founder devils to establish a breeding population free of the deadly Devil Facial Tumor Disease, which has wiped out 90 percent of the wild population in the 20 years since its discovery. When the animals came into captivity, conservationists knew very little about them—their social structure, nutritional needs, reproductive physiology, habitat requirements. Only through constant and close observation have Devil Ark keepers mastered husbandry practices for this species, learning how to tend to all of their needs and becoming the largest breeding program for the Tasmanian Devil on mainland Australia.

It Takes Eight to Tango

Historically two Tasmanian Devils have been kept in captivity together at a time, in part because that combination looks good in an exhibit, Faulkner says. It turns out, however, that two is not the magic number for breeding when you’re managing the health of entire population.

“When you keep two devils together all the time, you don’t get the kind of genetic diversity you need for a successful and healthy breeding program,” Faulkner says. “To get natural behaviors, we needed somewhere between two devils and the historical size of the population of devils in Tasmania. The goal was to ensure genetic diversity, to be cost effective, and to best emulate social structures in the wild that would be reproductively effective.”

In the end, Devil Ark worked with the Tasmanian Devil Breeding Specialist Group to set the magic number at eight reproductive-aged adults—four males and four females—in a large enclosure. This ensures that the females, who are only able to get pregnant for three three-day periods a year, are familiar enough with the males that they’re not confrontational when it comes time for breeding, but that they also have some space apart.

Australia’s Zoo and Aquarium Association oversees a massive studbook that includes genetic information about each individual devil and makes breeding recommendations that help ensure genetic diversity within the captive population, which is critical to the population’s health. 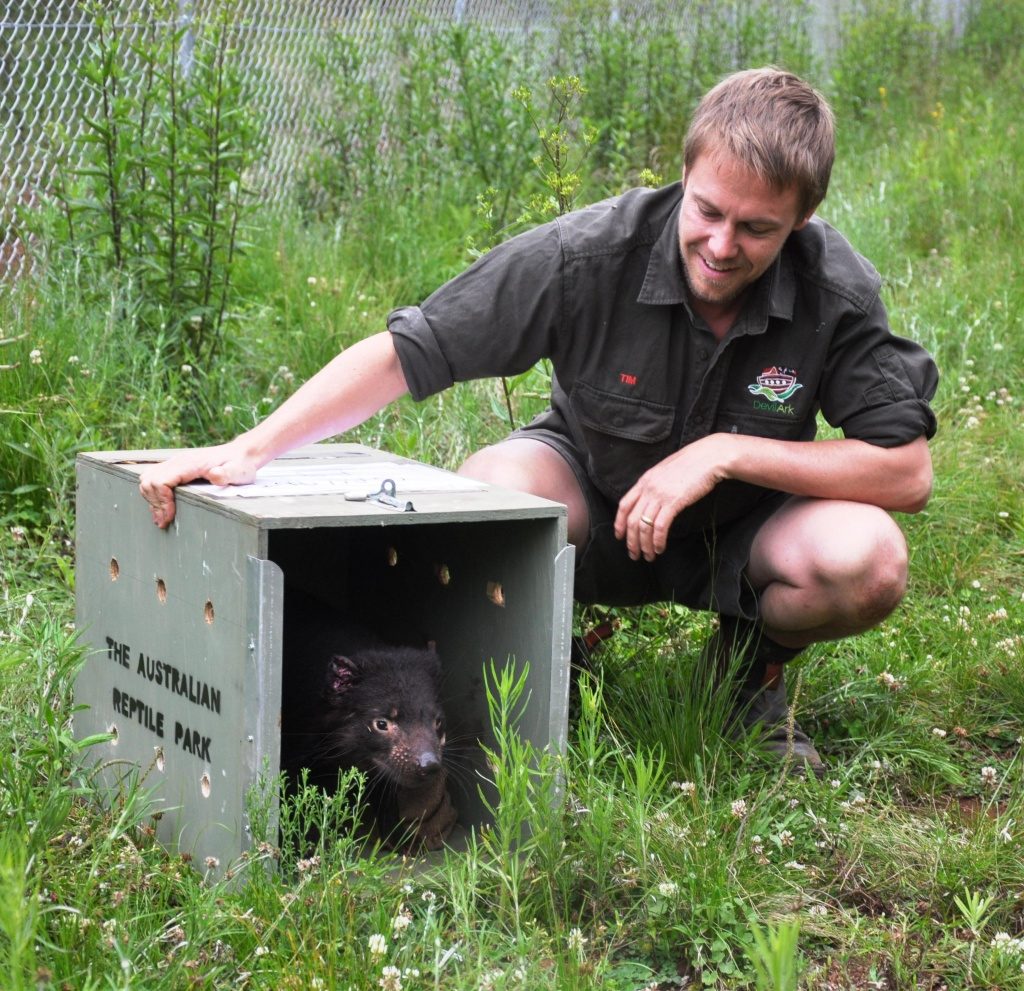 And what happens to non-breeding aged individuals at Devil Ark?

“In the wild the joeys leave their mum and naturally disperse,” Faulkner says. “At Devil Ark we remove the joeys born the year before from the yard and they go to pre-school yards. We move the devils that are too old to breed into retirement yards. Someday we’d like to be able to return the older devils to the wild to fulfill their ecological function and release half of the joeys into the wild, too.”

Faulkner and his team noticed an immediate difference between Tasmanian Devils in captivity in zoos and the devils that had come into their facility from the wild: the zoo devils would come right up to keepers for food, but the devils from the wild were shy and tried to stay hidden.

“We never saw the wild devils,” Faulkner says. “So getting to know them meant that we had to have exemplary observational skills. If we tried to look at a female every day and bothered her in doing so, we could compromise breeding, and breeding is the goal. So we had to figure out how to assess the welfare of the individuals without actually seeing a single devil.”

The keepers-turned-detectives developed a list of key questions to ask each day about the nocturnal animals:

By answering these questions, the Devil Ark team was able to give the devils the space they needed, while still assessing the health and well-being of the individuals. When they did see the individuals, they started to notice that although the animals are solitary, they also seemingly following a social hierarchy.

“They’re clearly able to problem solve,” Faulkner says. “They have these social dynamics and figure out where they fit in the hierarchy. They’re not as intelligent as a dog, but watching their development definitely revealed that they’re smart, and even puppy-like.”

Perhaps the most social part of a devil’s day is feeding time. As carnivores, devils are prone to obesity, especially when they are fed high-concentrate meat such as beef, chicken, hawk and lamb. So Devil Ark put the animals on a natural diet: full-carcass kangaroos that are harvested sustainably for human consumption. To best emulate the conditions in the wild, where some nights devils hit the feeding jackpot and other nights they may find no food at all, Devil Ark gives them a light group feed one day, a gorge group feed the next, and then follow that up with no food at all the next night. This has led to a healthy group of devils, Faulkner says.

By honing their observational and husbandry skills, Devil Ark keepers have successfully increased the population of devils to 180 individuals, putting the facility at capacity. Devil Ark now aims to double its population to 360, with the ultimate goal of someday returning these animals to a wild habitat free of Devil Facial Tumor Disease. These efforts mark the difference between a future for this species and its otherwise likely demise. 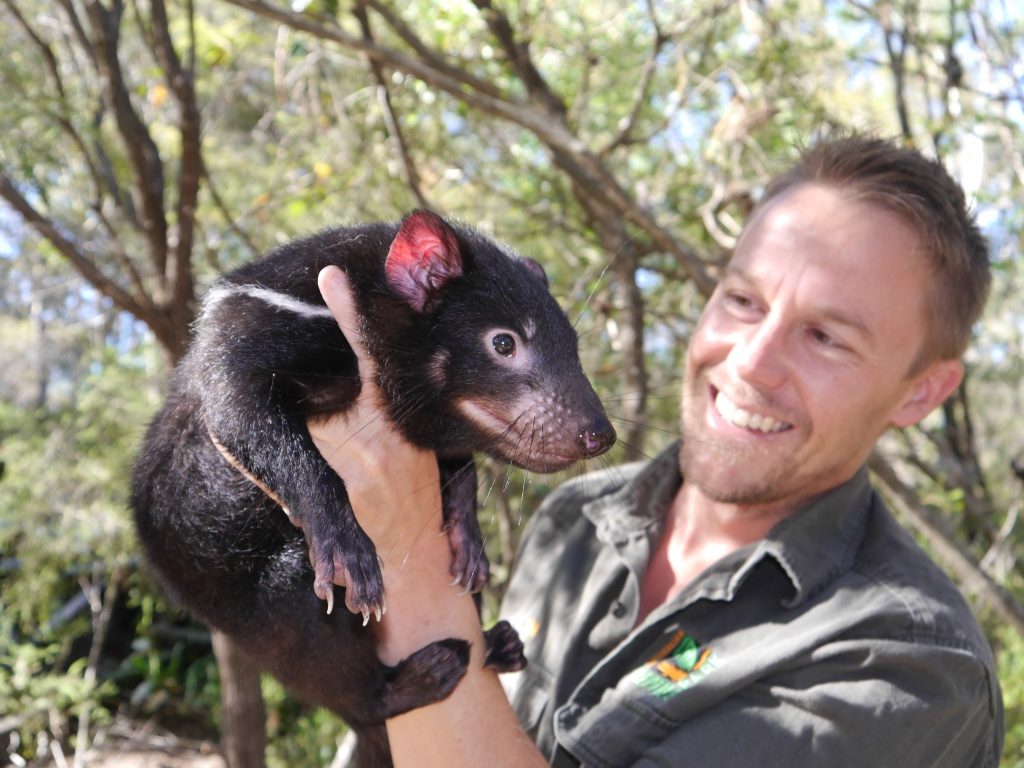 “We’re adaptable and that adaptability is very important and necessary for devils,” Faulkner says. “We’re in this because we believe in the species, we believe that we can protect the devil and all the species that depend on them. We believe there’s a light at the end of the tunnel.”