Last Year They Had to Fight Brazil’s Catastrophic Fires in Flipflops. This Year Instituto Araguaia is Ready to Take on Whatever the Next Few Months Throw at Them.

In the midst of a global pandemic, an unprecedented rate of deforestation, the start of what may be the worst fire season in the Amazon’s history, a rise in poaching that coincides with a decrease in patrolling, and government policy that is negligent at best and destructive at worst, GWC’s partners at Instituto Araguaia in Brazil are standing boldly at the ready to protect one of the most special corners of the planet.

“Last year we didn’t know what to expect,” says Silvana Campello, president of Instituto Araguaia, of Brazil’s 2019 fires, which burned 5 hectares (12 acres) of Cantão State Park and 50 hectares (124 acres) of Instituto Araguaia’s private reserve adjacent to the park, where the Amazon rainforest meets the wooded grasslands and savannas of the Cerrado biome on one side, and the wetland marshes of the Pantanal do Rio das Mortes biome on the other. “This year we are waiting and expecting the fires to come. We are prepared, we have the equipment and training we need, and we are going to continue to be vigilant. Without the element of surprise, we are much, much stronger.”

On a Sunday morning in late August of 2019, staff from Instituto Araguaia—an NGO whose mission is to protect the biodiversity of the Cantão region noticed smoke in the park during a routine patrol. When the team noticed the smoke, they used a program by a company called Planet to access satellite data, and what they saw in the satellite images confirmed their worst fears—a large fire had broken out near the Cerrado habitat. 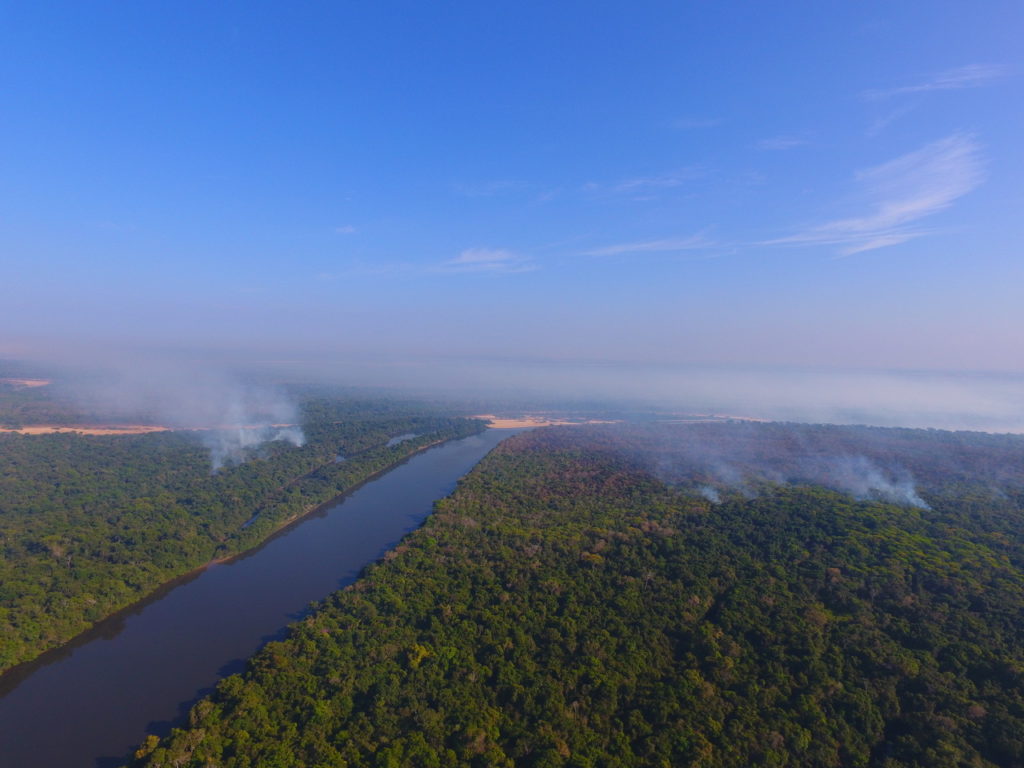 Though they did not have equipment, expertise, trained firefighters or even boots, the team and a set of volunteers from the local community did what they could to beat back the fire. But as they focused on the Cerrado side, another fire broke out in the Amazon section of the reserve, where fires are especially devastating. So, they ended up having to focus on putting out the fires on the Amazon side and letting the Cerrado burn.

“The Amazon is less resilient to fires and we knew that whatever we lost was not going to come back,” says George Georgiadis, executive director of Instituto Araguaia. “The fire in the Amazon burns underground, moving from tree to tree. Suddenly the tree behind you catches on fire along its trunk and you never saw it jump. It can persist for days underground. You think you’re done, you go home and three days later there’s some wind and the whole thing is on fire. We lost every tree that burned in the Amazon part of the reserve last year.” 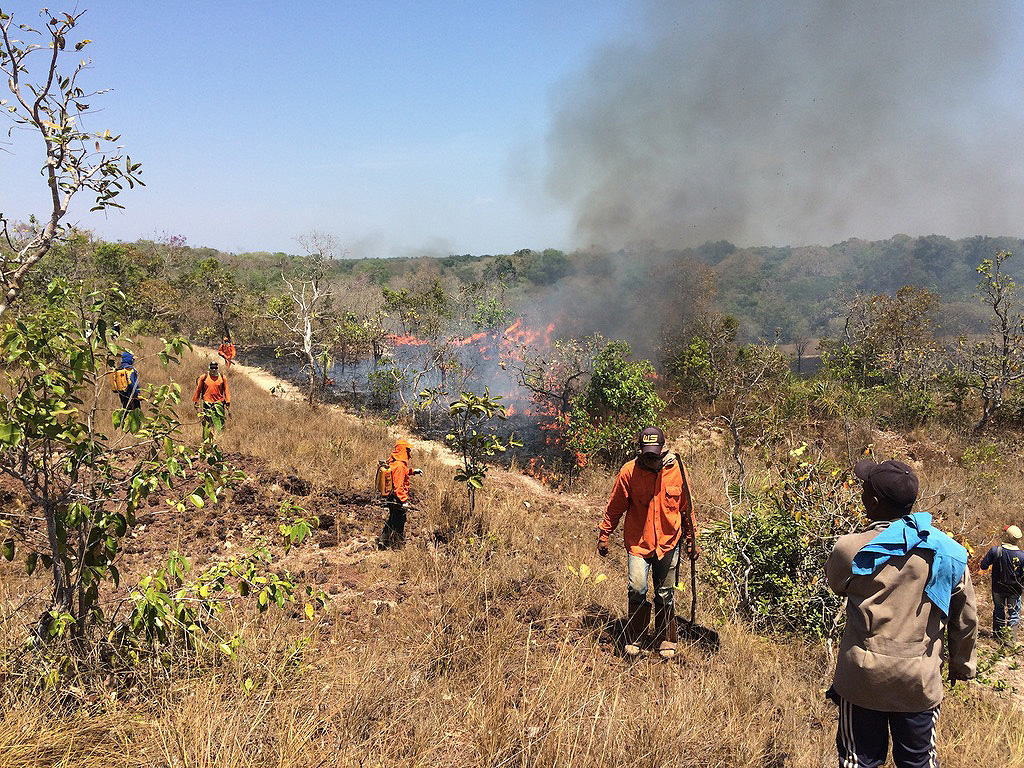 This year, however, Instituto Araguaia has taken every precaution they can. Their staff, who were given the option to leave the reserve to self-isolate in the city during the pandemic, all stayed at the reserve, both because their exposure to COVID-19 is lower there and because of their commitment to protecting Cantão. And thanks to funds from Earth Alliance that came through American Bird Conservancy, the team was able to buy water tanks, boots, face masks and gloves, leaf blowers to blow back the flames, and other necessary equipment. They’re also able to pay individuals a per diem to help, ensuring they have the human-power they need to fight the fires.

The team has also been doing fire prep since early May, when conditions were just starting to get dry, but not dangerously so. This included the removal of the highly flammable Andropogon grass along the border of the reserves, a series of controlled burns to reduce the load of kindling in the form of dry grass and timber in the Cerrado habitat, and the building of a ditch along the entire perimeter of the Amazon habitat.

“From last years’ experience, we learned which habitats do a good job of containing the fires, and we are much better positioned this year to understand the specific places we need to protect to ensure that the fires don’t gain traction,” Georgiadis says. “We also used a drone to analyze the path the fires took. Everything that we have done so far this year sets up the land itself to help fight off an inferno, while giving our team a chance to practice controlling fires.”

Most of the fires across the Amazon last year were started to clear land for agricultural production, overwhelmingly for cattle and cattle feed for beef consumption, and got out of hand in part because of the drier local microclimate that results from deforestation.

The Cantão fire, however, was the result of another illegal activity — fishing. Once a year the lush tropical forests of Cantão become underwater oases as the Araguaia River overflows, leaving behind 850 lakes-turned-fish-nurseries after much of the water recedes during the dry season five months later. Then it becomes a huge attraction to fishermen who will come to the region to illegally catch fish in the lakes, and who will often set fires at their camps to cook. 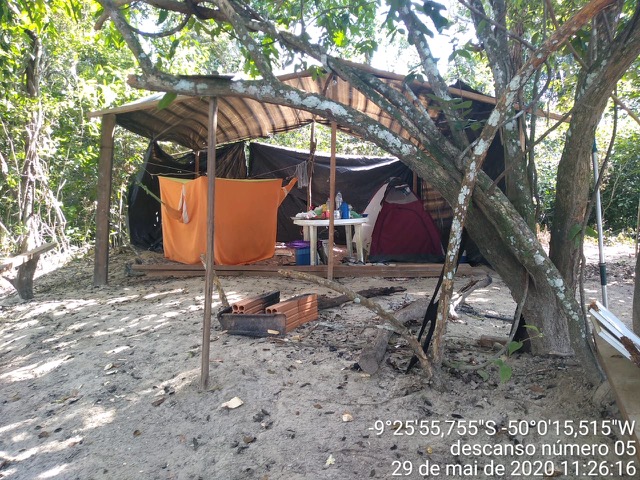 Fish poaching has been on the increase in the Cantão region, increasing the risk of fire. (Photo courtesy of Instituto Araguaia)

Usually government-led patrols would detect and prevent these activities, but last year, for the first time since 2010, the government suspended its cooperation agreements with environmental NGOs, and the number of patrol teams that Instituto Araguaia hosted at their base dropped from 38 in 2018, to zero in 2019. Last year one of these campfires got wildly out of control and started the fires at Cantão.

Campello and Georgiadis are already seeing up to 18 boats a week invading the park and while they do what they can to discourage them, they don’t have enforcement power. This year poaching in the park got more serious when a group of poachers built a permanent camp just a few kilometers upstream from Instituto Araguaia’s base. The poachers put up sheds, brought in boxes of nets and fishing equipment, roof tiles, and even brought in dogs. Ultimately, the poachers were warned to leave twice and left after four weeks, but weren’t fined, and the camp was removed. But Campello and Georgiadis expect the poaching threat to become even more severe as individuals who have become recently unemployed during the COVID-19 pandemic look for a source of income.

And that means an increased risk of fire.

A Place Unlike Any Others

Because of the intersection of three different biomes, the Cantão region is home to a unique collection of animals and plants, including the Amazon River Dolphin; the Araguaian River Dolphin, which, in 2014, became the first river dolphin discovered in more than a century; Giant Otters; Jaguars; Giant Anteaters; Jaguarundi; and Giant Armadillos. 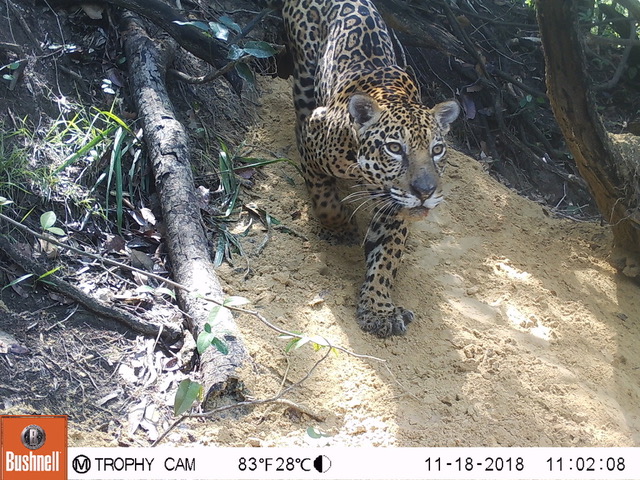 In the year since the 2019 fires were put out, Instituto Araguaia staff have observed nature’s will to survive. Not only do they have records of the many species present in the Cantão region before the fires like Pumas, Peccaries, Giant Anteaters and Giant Armadillos, April surveys turned up two species that were previously unknown to occur in the region—the Greater Grison (Gallictis vittata) and the Vanderhaege’s Toad-headed Turtle (Mesoclemmys vanderhaeghe). They also found a new species of frog for their reserves, the Splash-backed Poison Frog (Adelphobates galactonotus). And they obtained photos of Azara Night Monkeys (Aotus azarae) in an area nearby that they have leased and are converting into a reserve. The primate is not rare, but this was the first time the team was able to definitively identify a local group of this night monkey. 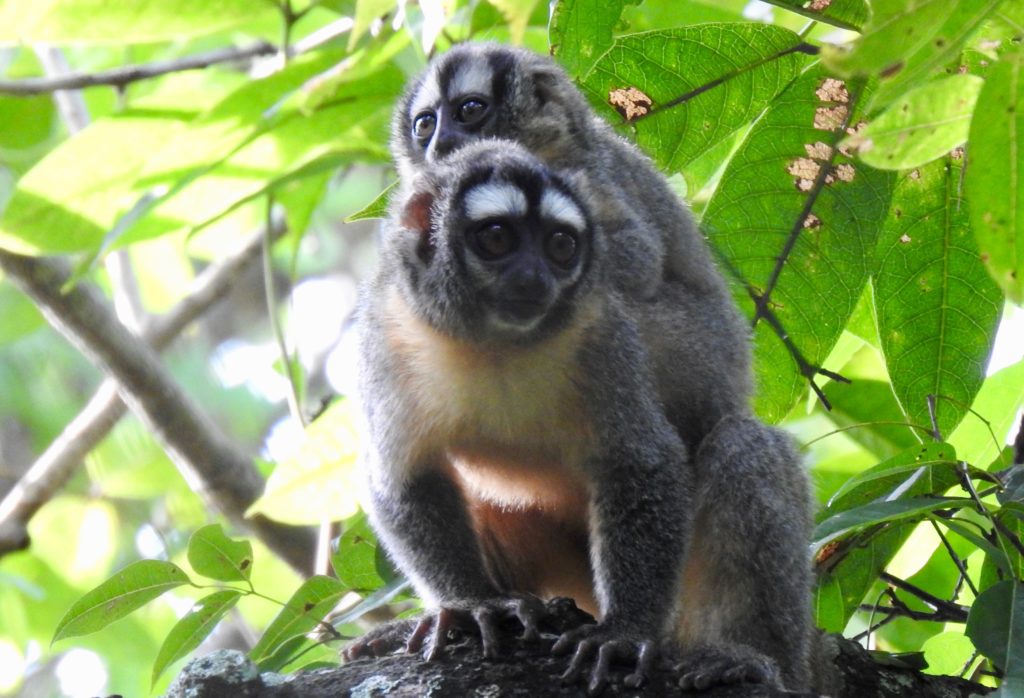 “Everything that is supposed to be here, is here,” says Campello. “We haven’t experienced any extinctions and that says a lot about what we’re doing here. We have so many animals here that are not known from anywhere else. It’s very special.”

Even through the turmoil of the last year, Instituto Araguaia has been unwavering in its commitment to continuing its long-term research projects in the park, including on Jaguars, river dolphins, a new project on large mammals, and their longest-term project on River Otters.

Since its founding, Instituto Araguaia has been monitoring the River Otters that live in Cantão, collecting 10 years of data that is revealing behavior for the species unknown to science. Unlike the usual scientific depiction of Giant Otters as antagonistic against one another, the families in Cantão appear to get along without conflict, even sometimes rotating den use. This research is set to be submitted to a scientific journal this fall, highlighting just how exceptional the animals are in Cantão. 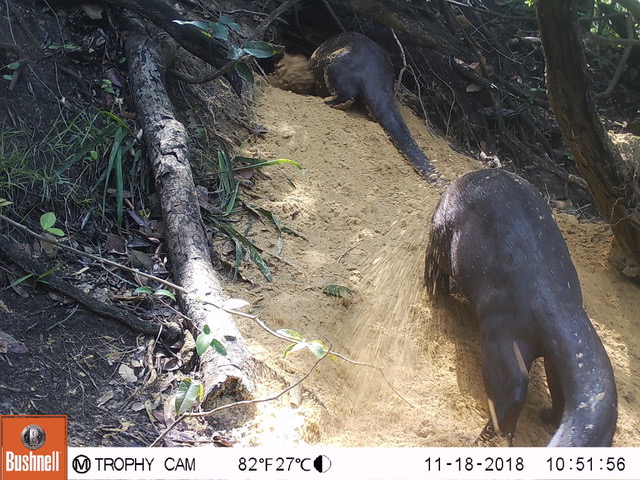 Everything that they do, including now getting ahead of fire seasons that are burning bigger and hotter, Instituto Araguaia does to help protect these animals and this magical place.

“I am not very optimistic about the planet as a whole in terms of climate change and what’s going to be left of the Amazon after this era,” Campello says. “But I am optimistic about Cantão. We are fighting the good battle here to deliver this incredible place to future generations. And that is exactly what we are going to continue to do.”

(Top image: The Instituto Araguaia team performs a controlled burn ahead of the dry season to create fire breaks to prevent the spread of bigger, hotter and faster fires. Photo courtesy of Instituto Araguaia.)