Cloud Forests With Every Chance of New Species

Straddling the boundary of the Choco and tropical Andes in Ecuador is a stretch of mountainous forest that is home to unique plants and animals—many of which can’t be found anywhere else on the planet. Rio Manduriacu Reserve has been a treasure trove for researchers, yielding species completely new to science, and it hasn’t given up all of its secrets yet.

“I don’t know half of the species in this forest and I’ve been working in conservation for 20 years,” says Javier Robayo, coordinator of western reserves for Fundacion EcoMinga, which manages Manduriacu.

From the tops of the mountains in the cloud forests, streams and waterfalls course down to the lowlands.

“You can’t walk more than 15 minutes without coming across waterfalls and streams,” explains Robayo. 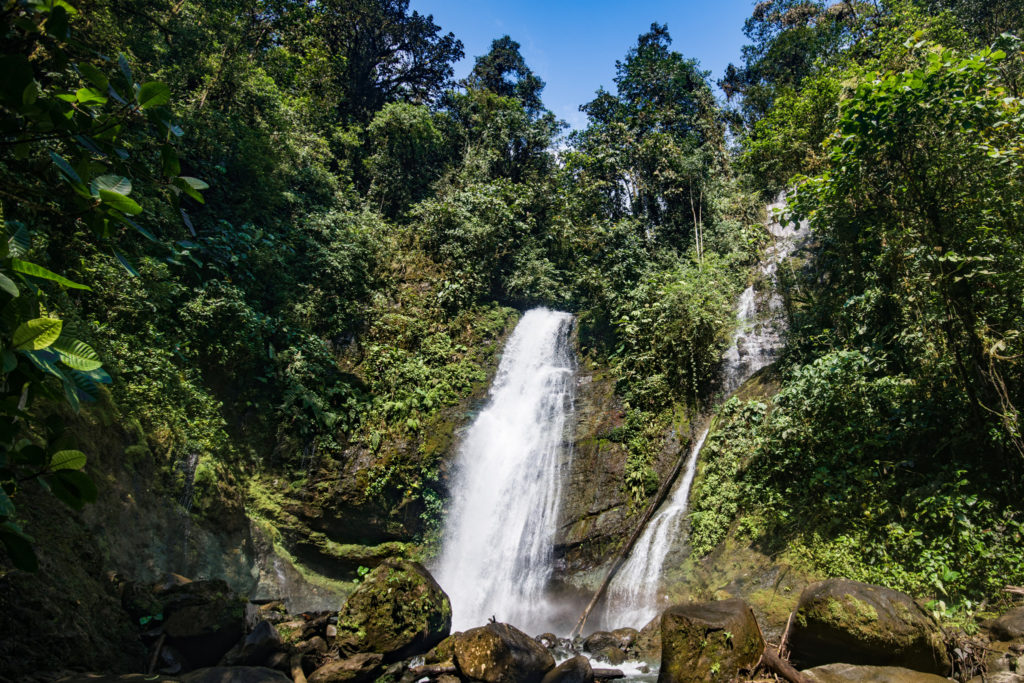 A waterfall in Manduriacu Reserve. (Photo courtesy of Scott Trageser) 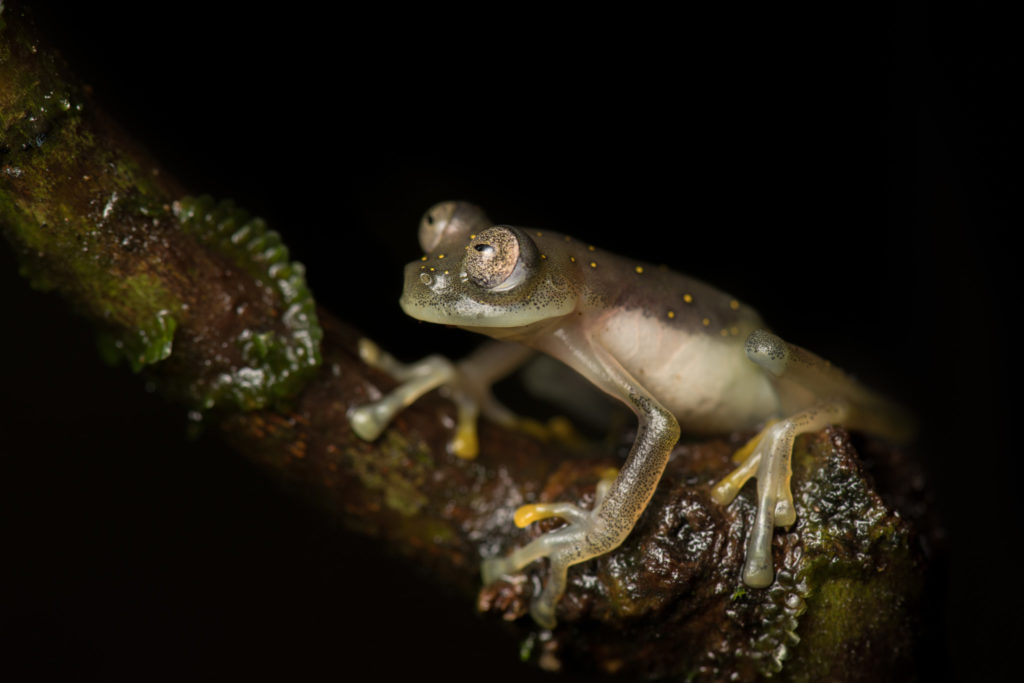 “We’re still discovering new vertebrates and mammals,” says Robayo, which was unexpected when it became a private reserve 12 years ago and part of the Cotacachi Conservation and Sustainable Use Area.

The latest mammal discovery is an entire new genus of rodent. So far, researchers have identified two new species belonging to it.

The canopy of Manduriacu is home to the Critically Endangered Brown-headed Spider Monkey. There are only about 250 of the monkeys left in Ecuador and they are important to the survival of the forests they live in. They disperse seeds as they move about the trees, eating fruit, flowers and insects. Timber trees especially depend on Brown-headed Spider Monkeys to germinate their seeds. The seeds soften after they pass through the monkeys’ digestive systems and drop to the forest floor.

The plants growing in Manduriacu are as unique and rare as the wildlife in the levels of the forest above. Robayo is a botanist and has been awed by the endemic plant species he and other researchers have found in the reserve. On his first expedition in the reserve he and the team he was with discovered four new species of plants.

Some of the most recent discoveries have been orchids. The orchid family is the largest plant family in the world, and Manduriacu has endemic orchids that can’t even be found in neighboring reserves just a short distance away. Researchers have submitted descriptions of two new the orchids for publication in scientific journals to officially recognize them as distinct species. Beyond the two species awaiting descriptions, Ecominga and its partners have discovered nearly 30 new species within the Teagueia genus.

Orchids are not the only new plant species discovered within Manduriacu. The Manduriacu Magnolia is also a newly discovered species and the reserve is the only place where it is protected. One of Manduriacu’s rangers discovered the magnolia tree after learning that two other magnolia species had been discovered in EcoMinga’s Baños Reserves.

Ecominga researchers and their partners discovered Magnolia vargasiana and Magnolia llanganatensis there after scaling the trees to collect and examine their flowers. The trees each produce white flowers that open every night and close in the morning, trapping pollinators. The captive and pollen-covered insects are freed from their temporary floral containment when the flowers open again during the evening. 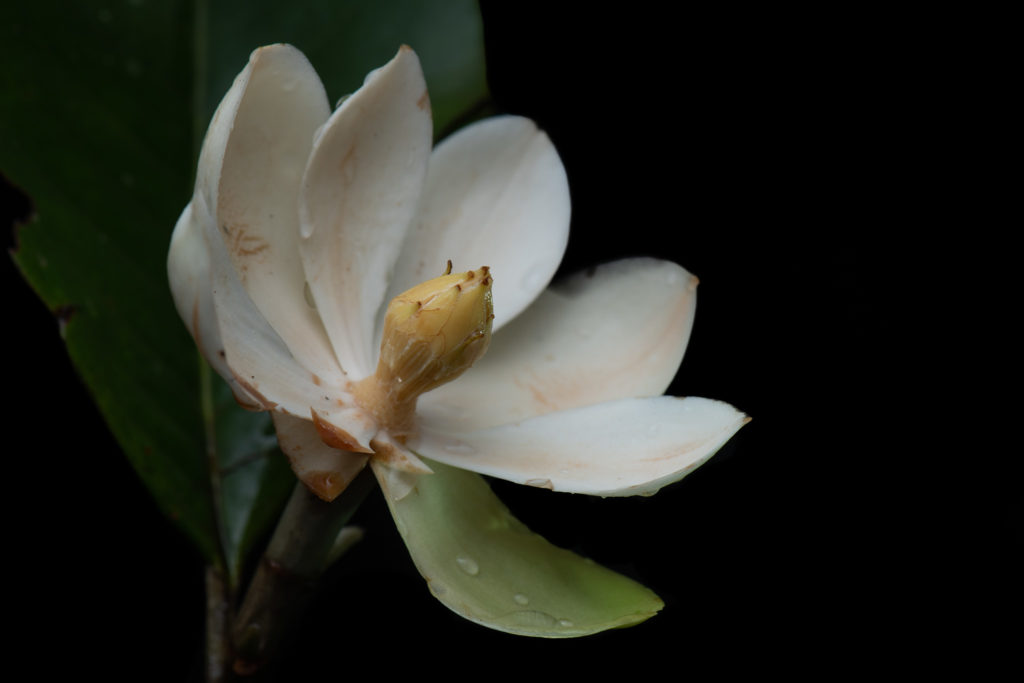 A flower from a Magnolia tree in Manduriacu. (Photo courtesy of Scott Trageser)

"Manduriacu is a unique place between two of the most biodiverse ecoregions in the world, and we are not even close to being finished with discovering and the incredible biodiversity of animals and plants that are most likely are only found there,” says Lina Valencia, Colombia Conservation Officer for Global Wildlife Conservation.

Despite the incredible biological diversity and secrets Manduriacu most certainly still has yet to reveal, researchers may never have the chance to discover them. Even though it is a part of the Canton Tulcan Conservation Area, mining concessions have been allowed in Manduriacu.

“Extractive industries are putting its wonders at risk, and we are going to lose them without even knowing them,” says Valencia.

Gold mining in the area has increased exponentially and mining company BHP is encroaching further and further into Manduriacu.

“It’s clear we can’t stop mining everywhere,” says Robayo, “but in these high biodiversity areas the cost is so high.”

Although Manduriacu is part of the Cotacachi Conservation and Sustainable Use Area, it’s not a bosque protector, a privately-owned protected forest recognized by the Ecuadorian government, which means it has fewer protections against threats like mining. There are other reserves near Manduriacu, however, that are bosque protectores, and one of them is at the center of a fight against mining.

A new court case on the Rights of Nature, involving Los Cedros Biological Reserve, which is a bosque protector and a high biodiversity area to the north of Manduriacu, could have implications for all 186 protected areas recognized by the Ecuadorian government.

Ecuador, a country with nearly unparalleled levels of biodiversity in several different biomes, including cloud forest, Choco and tropical forest, has given nature its own rights under its constitution. The case before the Constitutional Court, which began Oct. 19, argues that the mining in Los Cedros that the government granted permits for, violates the Rights of Nature.

The ruling the Constitutional Court gives in the case will, for the first time, set a precedent for the Rights of Nature. If it rules in favor of the Rights of Nature, it will dramatically limit the ability of mining companies to operate in Ecuador. And it will likely save Los Cedros, and other bosque protectores and the amazing nature they contain.

“The Constitutional Court will set a precedent in the country and will decide on the future of many conserved areas and the communities living in them,” says Valencia. “It will hopefully uphold the government’s respect for and recognition of the Rights of Nature that are embedded in the Constitution.”

Though Manduriacu is not a bosque protector, the hope is that a positive ruling in the case could benefit all of nature in Ecuador.