Imagine that you are a wildlife biologist and you’ve been given a dozen pairs of eyes that you can place anywhere in the forest to watch wildlife for you. All you have to do is find a good area, put them down, then walk away. These eyes are unblinking and all-seeing. They’re open 24 hours a day, seven days a week. They don’t get tired and bloodshot. They don’t need to be propped open with toothpicks after hours of empty staring. They don’t need glasses or contacts. And they rarely miss an animal. Sound too good to be true? Well, if the eyes are attached to the rest of a Homo sapien, then it is. People are not well equipped to sit in one place for hours or days or weeks on end looking for wildlife. People have to eat and sleep. But fortunately there is a technological solution: the camera trap. 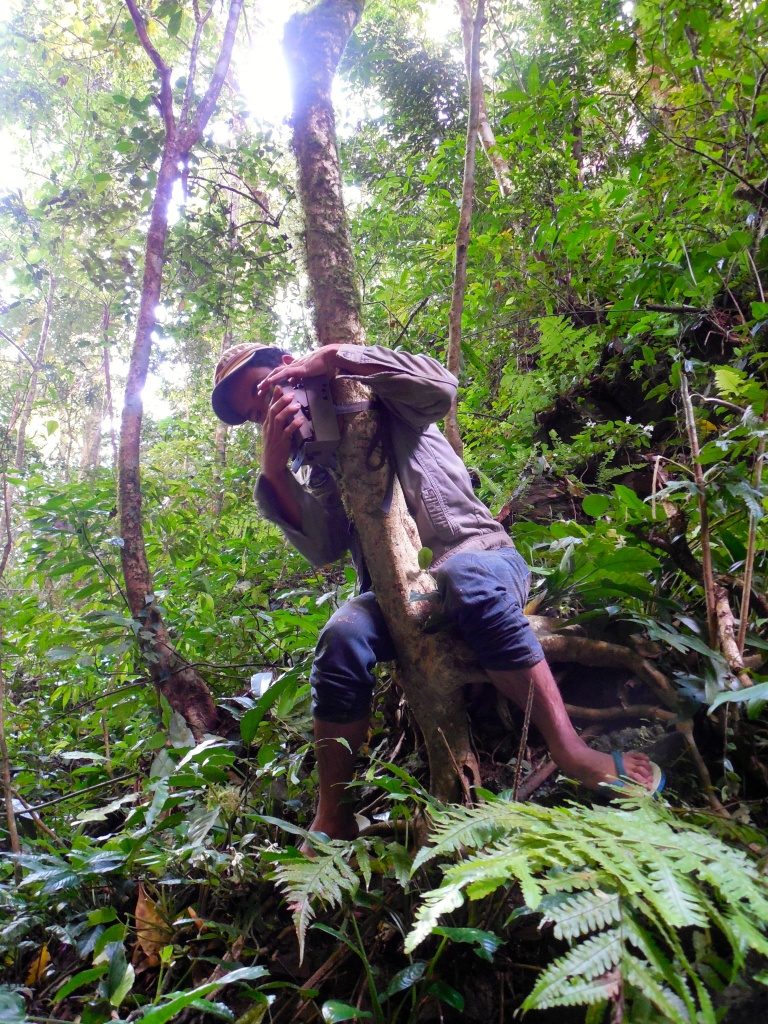 A camera trap is a camera with a sensor that takes a picture when the sensor is tripped. Although they come in an almost endless variety of shapes and sizes, the basic premise is the same for every camera: the sensor is triggered and a photo is snapped. As you might expect, camera traps have revolutionized wildlife surveys around the world. Biologists can use camera traps to gather large amounts of data over large spatial and temporal scales for a variety of species. They are especially useful for studying rare or elusive animals. Camera traps have given biologists intimate glimpses of everything from pygmy hippos to okapi to Asiatic cheetahs to Javan rhinos. These “eyes in the forest” are an ideal way to see the unseen, to peer into secretive worlds of wildlife. 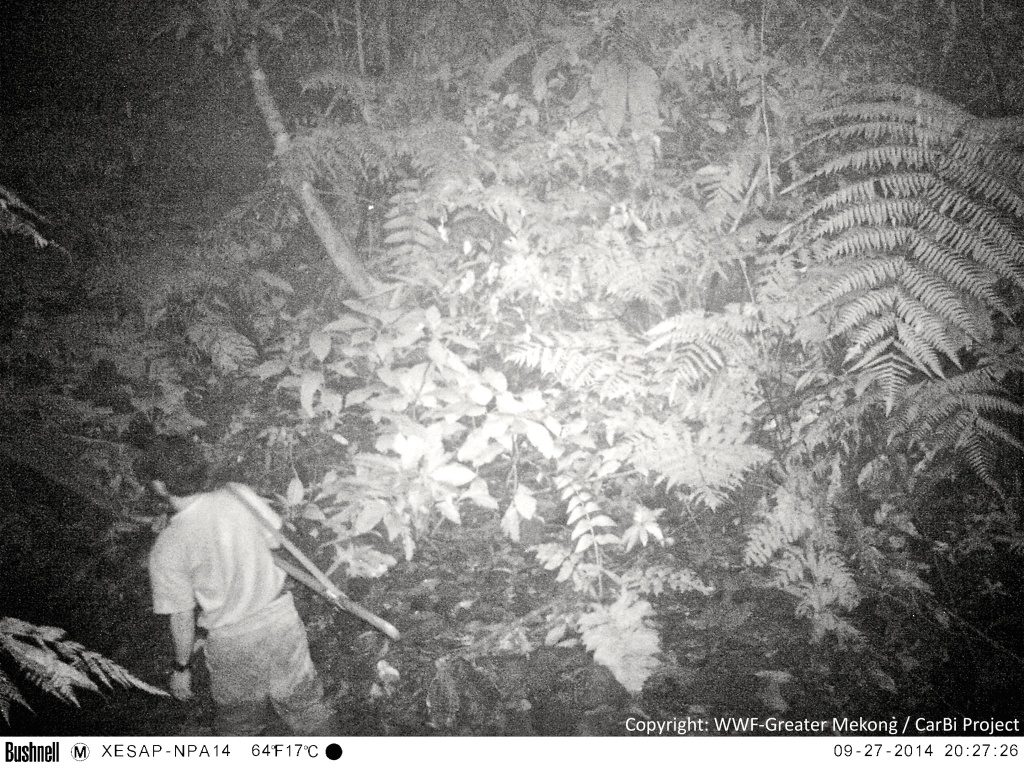 Camera traps not only provide valuable images of elusive species, but sometimes capture the poachers threatening those species.

In June 2014, I set out with a team from the World Wildlife Fund to survey the mammalian biodiversity in Xe Sap National Protected area, deep in the jungles of Laos. Xe Sap is one of the largest and most unexplored protected areas in the country. It is believed to harbor several mammal species of conservation concern, including species endemic to the Annamite Mountains. However, the existence of some of these species in the protected area was based on anecdotal information and conjecture. Biologists needed proof. To gather information about the mammalian biodiversity in these forests and to document the existence of rare Annamite endemics we used—yep, you guessed it—camera traps. We set 28 cameras in a remote region on the border with Vietnam. For almost a year the cameras have been silently snapping photographs. The results have just come in. And they present a unique glimpse into one of the world’s most fascinating and threatened ecosystems. 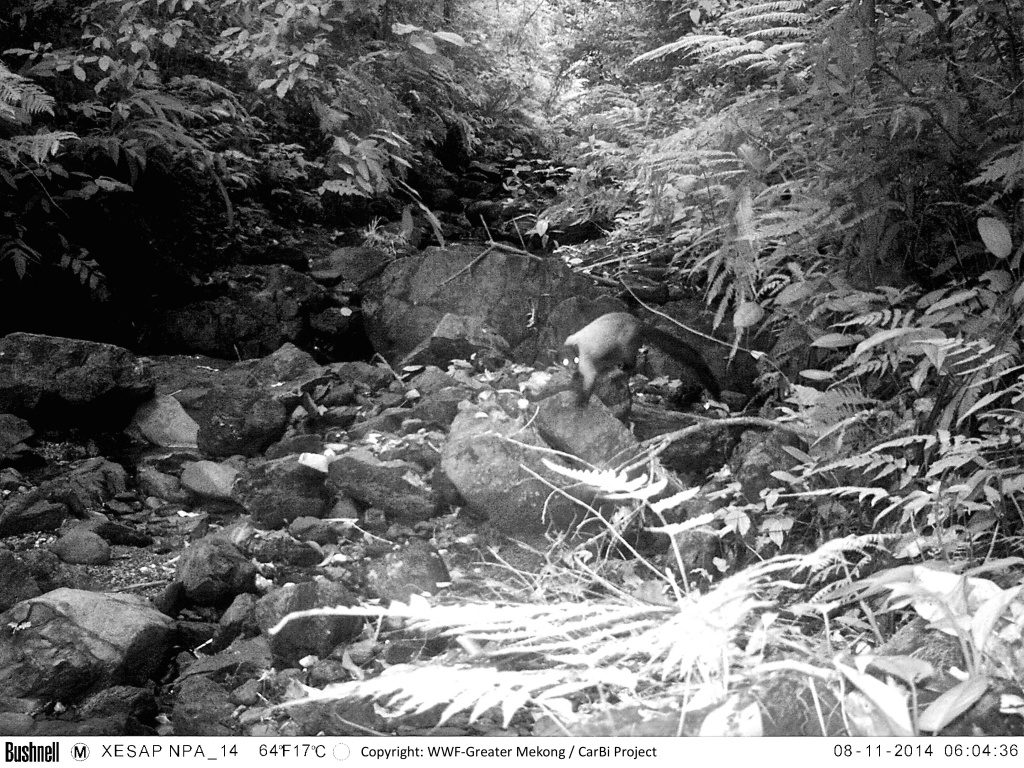 The Yellow-throated marten (Martes flavigula) is a medium-sized carnivore closely related to ferrets and weasels. Its long, streamlined body, which includes a tail more than half its body length, belies a powerfully built physique. The most striking aspect of its appearance is its unique coat coloring: a chocolate-colored head abruptly gives way to a burnished golden body that then fades again into dark hind legs and tail. This is a predator that is as visually arresting as it is ecologically stunning. Its muscular body was built to take down any small prey unfortunate enough to cross paths with it: from mice to rabbits to lizards to snakes to frogs to ground-dwelling birds, almost anything is fair game. It has even been reported to feed on small ungulates. It’s a good thing that yellow-throated martens don’t grow to be the size of tigers, or else we’d all be in trouble! 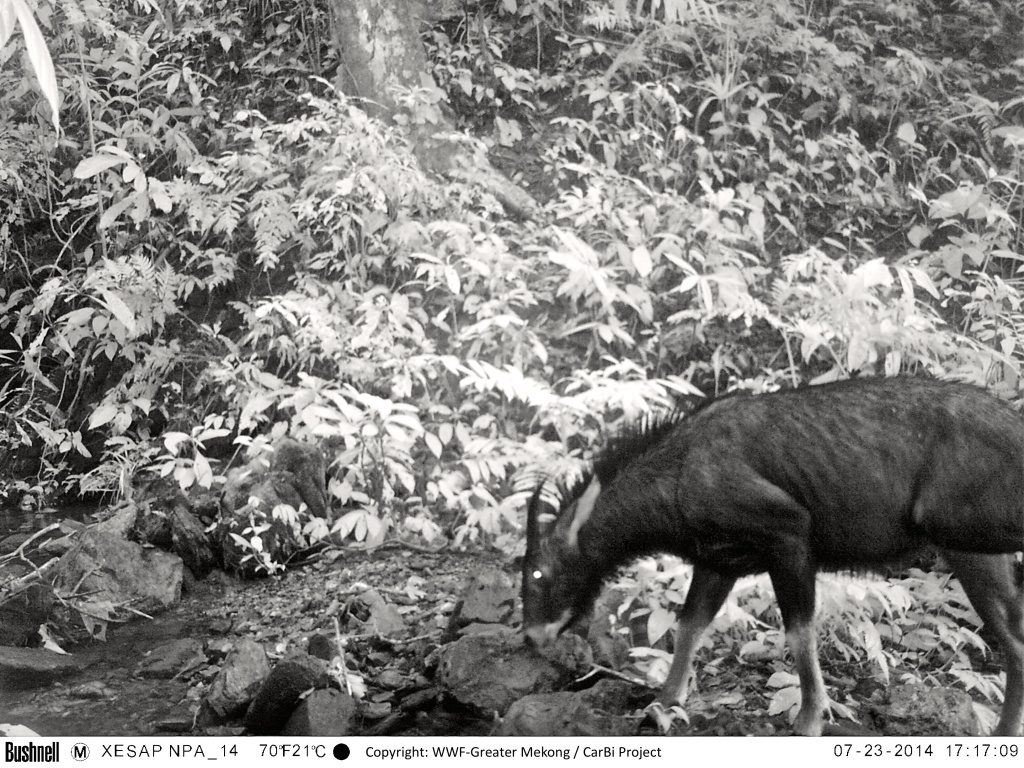 The Mainland Serow (Capricornis milneedwardsii) is a unique member of the even-toed ungulate gang. It’s not a goat or an antelope but rather something in between. The Serow is a member of the Caprinae subfamily, which contains odd-looking goat-antelopes, including Markhor, Thar, Bharal, Chamois, Takin, and several other crossword puzzle candidates. Like their evolutionary cousins in the ibex family, these species tend to live in steep mountainous terrain. The serow is no exception. It is renowned for its climbing ability. Despite the fact that sizable populations exist in several countries in Southeast Asia, the mainland serow is still in a steady state of decline. This is particularly true in Laos and Vietnam where snaring has negatively impacted all large mammal populations. In Vietnam Serow are prized for their meat and can often be found in rural markets. Its bones and other body parts are also used for medicinal purposes. Because of these threats the IUCN Red List classifies the Mainland Serow as Near Threatened. 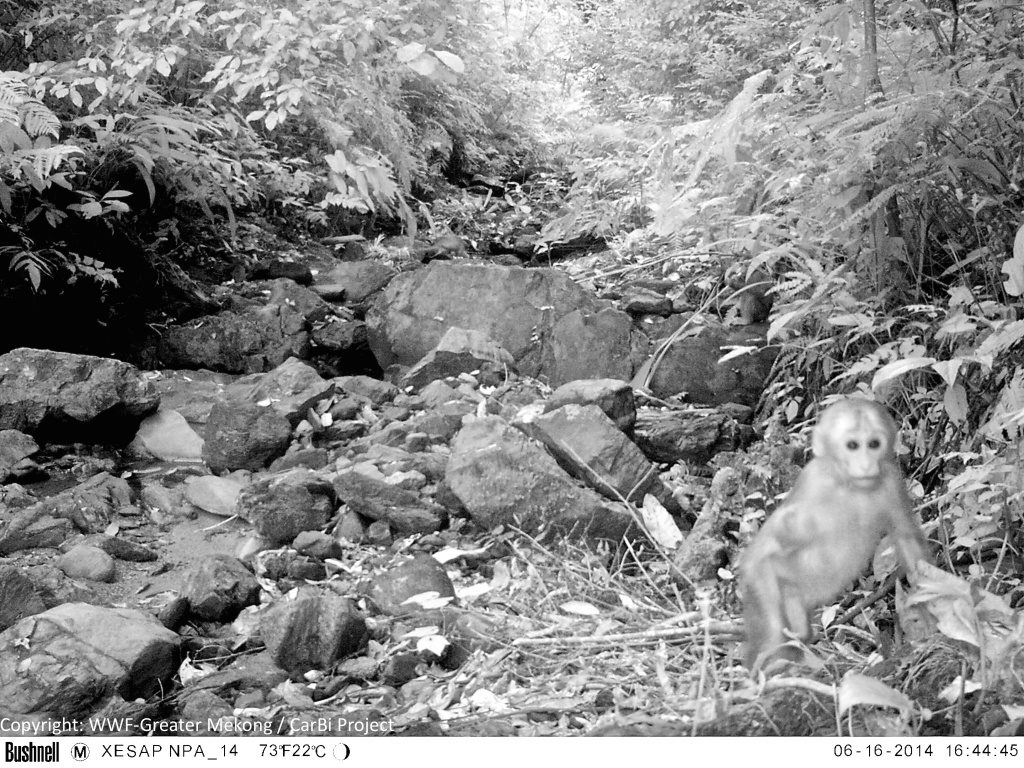 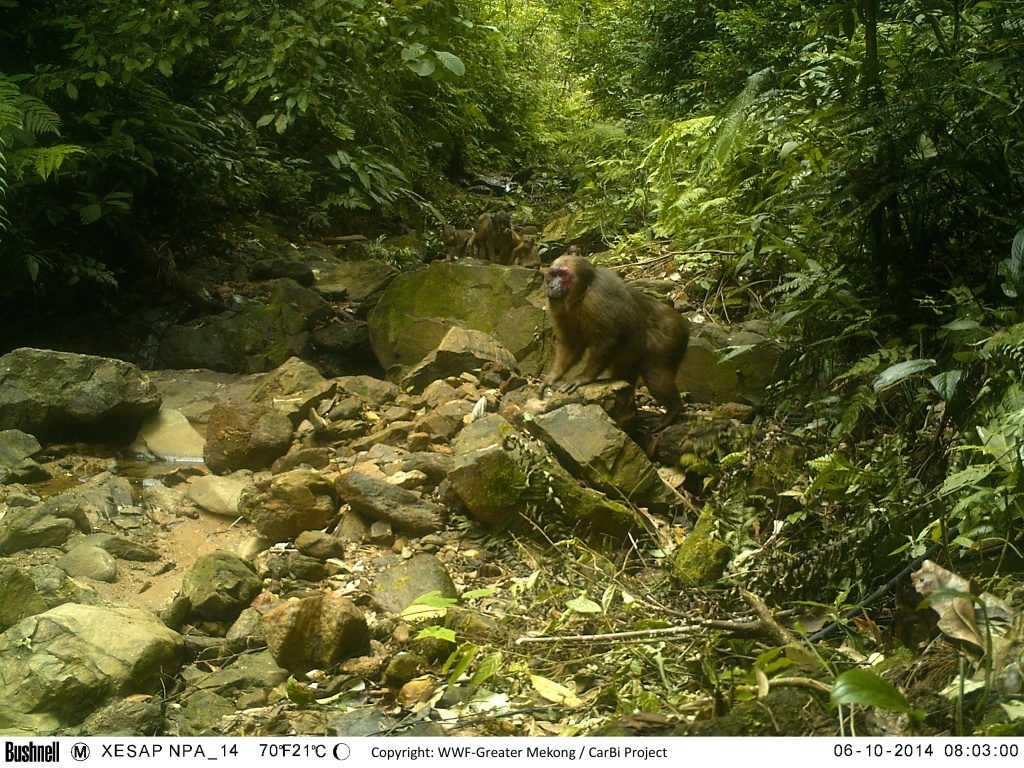 The Stump-tailed macaque (Macaca arctoides), also called the Bear macaque, is a monkey species found throughout Southeast Asia. Despite its wide range, the species is threatened by habitat loss and overhunting, and populations are declining across its range. It is listed by the IUCN Red List as Vulnerable—one step away from Endangered. The Stump-tailed macaque is highly frugivorous (a frugivore is a fruit eater), but is also known to feed on vegetation and to hunt freshwater crabs, frogs, bird eggs and insects. This monkey is—perhaps surprisingly—a poor climber. It is as comfortable on the ground as it is in the treetops. The presence of numerous young macaques in the camera trap photos indicates a healthy breeding population in Xe Sap. 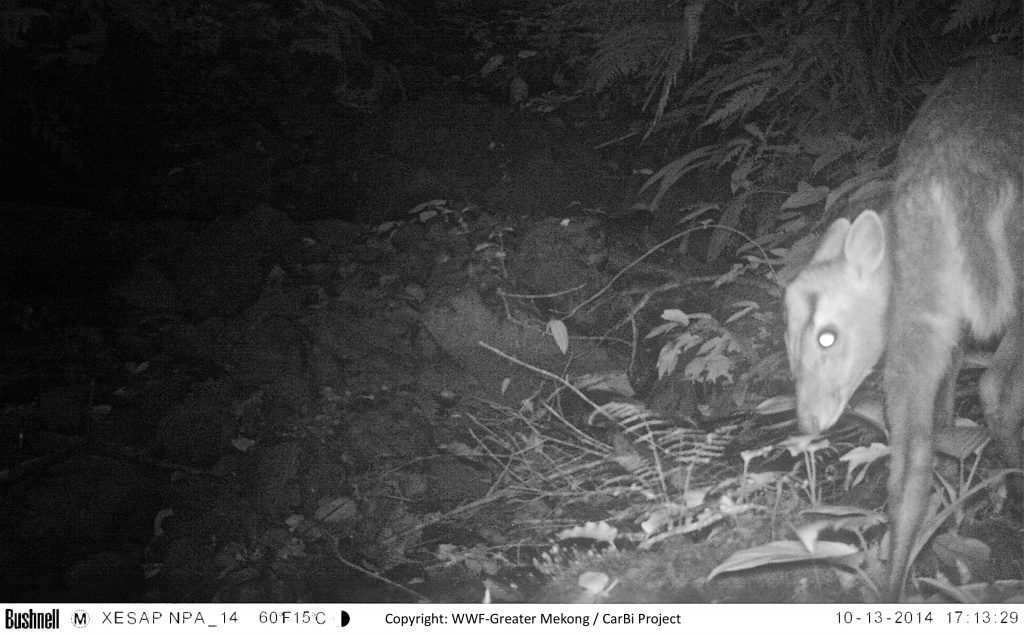 The Annamite dark muntjac (Muntiacus rooseveltorum / truongsonensis) is one of the most mysterious and fascinating species in the region. Its appearance is striking: a chocolate-colored body crowned by a bright-orange tuft of bristly hair on the head. The Dark muntjac is found only in the Annamite Mountains straddling the border of Vietnam and Laos. Experts believe that the Dark muntjac is actually a species complex, comprised of two, or even three, closely related species. However, the taxonomy of this elusive ungulate is currently unresolved. Virtually nothing is known about its basic ecology or distribution. For this reason the Dark muntjac is classified by the IUCN Red List as Data Deficient. However, because illegal hunting threatens all large mammals in the region, it’s likely that populations have severely declined from historic levels. Additional information is urgently needed if biologists are to devise a conservation plan for the species. These photographs confirm the presence of the Dark muntjac in the eastern section of Xe Sap. 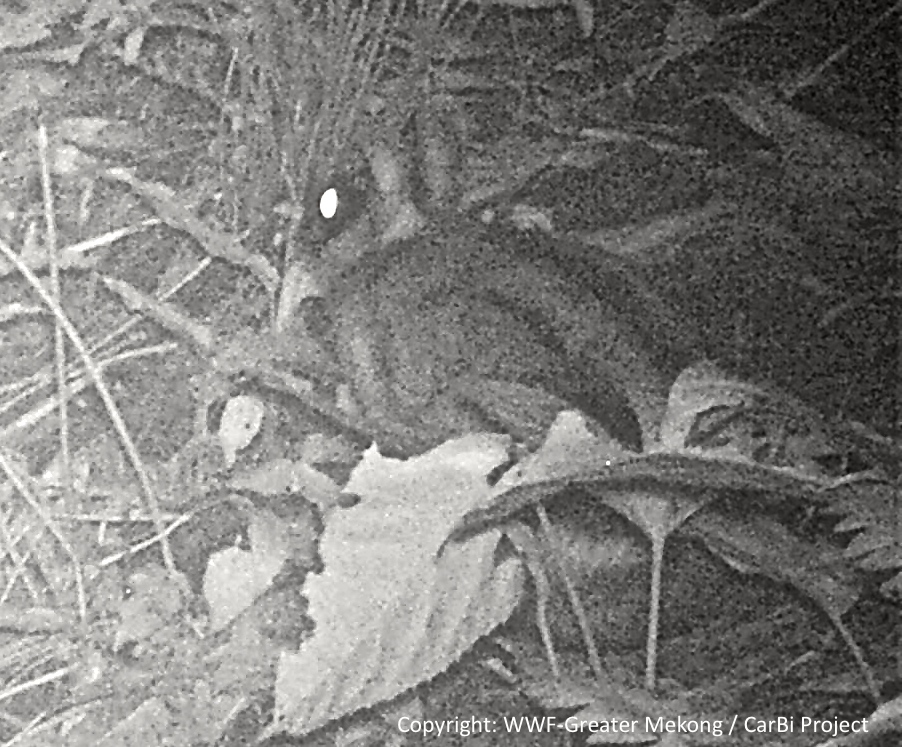 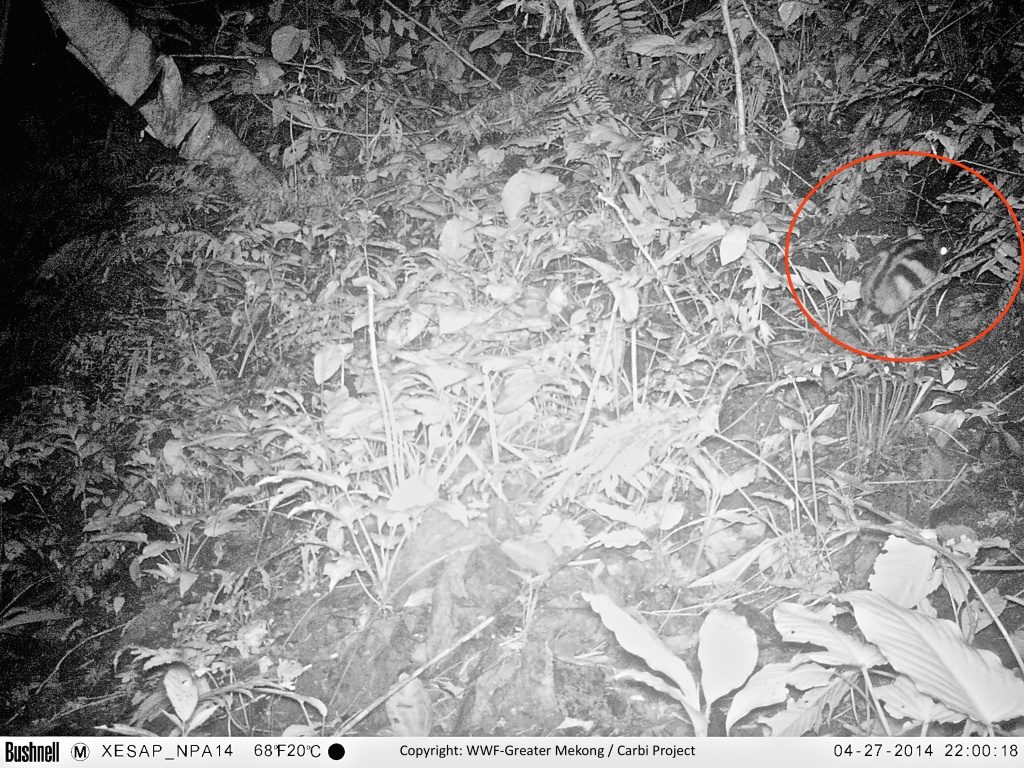 The Annamite striped rabbit (Nesolagus timminsi) is found only in the Annamite Mountains. This jungle-dwelling rabbit was only discovered by science in 2000. Goldish-tan, with dark tiger-like stripes streaked across its body, it is one of the most stunning lagomorphs in the world. Add to this the fact that nothing is known about the basic ecology of this species and you have an enigmatic animal that captivates the imagination. To date no scientific study has been conducted to determine its exact range or population status. It is likely that the species is losing suitable habitat through extensive logging and that numbers have been reduced from historic levels through intensive hunting. But because scientists lack specific information it is listed by the IUCN Red List as Data Deficient. These images are the first to confirm the existence of the species in eastern Xe Sap.