Wildlife photographers play an incredibly valuable role in conservation. Their photos help scientists around the world to visually monitor animals and their habitats. And photos also help people form emotional connections with animals and empathize with their struggles.

Mauricio Pacheco, a hobbyist wildlife photographer, recently went a step further and actually rediscovered a species! While exploring a stream near Caranavi, Bolivia, on Jan. 1, 2020, with fellow photographer Gabriel Archondo, Pacheco spotted four adult Three-colored Harlequin Toads (Atelopus tricolor). This species – the only known harlequin toad species in Bolivia – had not been recorded since 2003. The Three-colored Harlequin Toad was reassessed as Critically Endangered at the Bolivian Red List Assessment Workshop in September 2019, and this status  is due to be published on the IUCN Red List website later this year.

Although Pacheco is an economics professor by day, he spends much of his free time photographing frogs, birds and other animals. He has documented 74 frog species in Bolivia’s Yungas region and has also become familiar with those species that are lost to science. When he saw the Three-colored Harlequin Toads, he recognized them immediately. 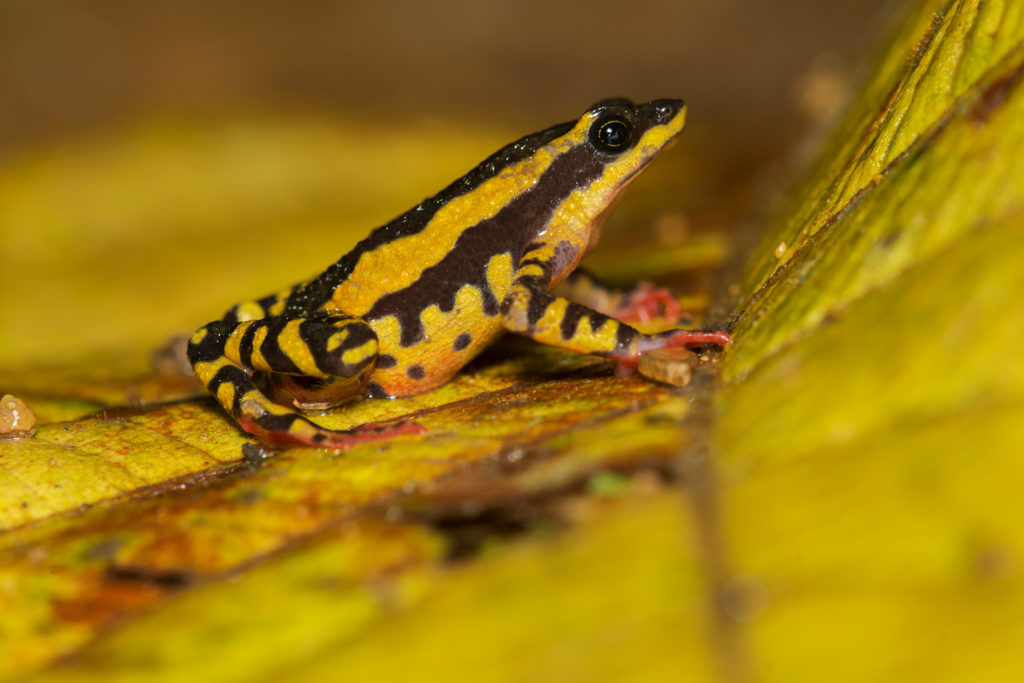 Until this year, the Tricolor Harlequin Toad had been lost to science since 2003. (Photo by Mauricio Pacheco)

“It’s impossible to miss this species,” Pacheco says. “It’s the only one with these particular colors in Bolivia. It was just an incredible, indescribable feeling to realize what we were seeing.”

Pacheco and Archondo removed one of the toads from the stream to photograph it in detail. He left the others untouched but took a group shot of them in stream. He knew exactly who he needed to contact to share his photos and the news of his discovery: Claudia Cortez and Arturo Muñoz, co-chairs of the Amphibian Specialist Group Bolivia and 2015 winners of the Sabin Conservation Prize for their protection of the Titicaca Water Frog.

Pacheco frequently collaborates with the two scientists, sharing updates from the field.

“My first reaction was – FINALLY! I was so happy,” says Muñoz. “We’ve been looking for so long. I saw plenty of Three-colored Harlequin Toads back in 2001 but then they and so many others started disappearing. We’ve recently seen some species rebounding and that gave us hope. And now we have the opportunity to work with a species that really needs our help.”

Chytridiomycosis, an infectious disease caused by the chytrid fungi, has decimated amphibian populations worldwide. Harlequin toads are a priority group of species for Global Wildlife Conservation’s conservation efforts because they’ve been hit particularly hard by chytrid, making them the world’s most threatened group of amphibians. Seventy-six of the 96 harlequin toad species are Endangered, Critically Endangered, Extinct or Extinct in the Wild. As of 2018, 37 harlequin toad species had disappeared from their known homes and have not been seen since the early 2000s, despite efforts to find them. These include the Scarlet Harlequin Frog, one of GWC’s 25 most wanted lost species.

“Without a coordinated and collaborative regional effort, we are going to fail to save this genus from extinction,” says Dr. Lina M. Valencia, GWC’s Colombia conservation officer. “The Atelopus Survival Initiative aims to bring together scientists, conservationists, government institutions and the local community to ensure we don’t lose the jewels of the Neotropics forever. Mauricio’s discovery and those of other harlequin toads like the Starry Night Harlequin Toad are examples of the incredible value of citizen science and local traditional knowledge in the conservation of this imperiled group. Rediscovering populations of harlequin toads that were thought to be lost gives us hope that it is not too late to recover this group of beautifully colored amphibians.”

Muñoz and Cortez advised Pacheco on checking the toads he found for chytrid fungi without harming them, and they appeared healthy. Scientists don’t know how much of the Three-colored Harlequin Frog population decline is due to disease versus human encroachment on their habitats for farming and residential development. And they’re still learning why some harlequin species and habitats are more resilient than others.

Muñoz, Cortez and Pacheco planned to meet in Caranavi in March 2020 to study the Three-colored Harlequin Frogs and threats to their habitat. They had to postpone their trip due to the worldwide novel coronavirus (COVID-19) outbreak, and will likely need to wait until the next rainy season (December-March) to visit. Harlequin toads are very difficult to find during the dry season, as the rainy season is when they go to creeks to breed.

“We need to assess the opportunities for captive breeding, understand the impact of farming and work closely with local communities to develop a conservation campaign,” Muñoz says.

The various patterns of the Tricolor Harlequin Toad. (Photo by Mauricio Pacheco)

Before widespread travel restrictions began, Pacheco was able to collect some helpful information for Muñoz and Cortez, such as data about the stream’s temperature and quality.

“Mauricio knows more than many herpetologists. He’s out in the field all the time just because he loves it, and he gathers really valuable knowledge,” says Muñoz. “We look forward to collaborating with locals like Mauricio and international experts on what may be our last chance to save this species.”