Quoll it a Comeback: A Marsupial Boomerangs Back to Mainland Australia

By Global Wildlife Conservation on May 22, 2019

Kids grow up so fast. One day your baby’s tiny finger is wrapped around yours, and in the blink of an eye her strong, capable hand is wrapped around a diploma, ready to conquer the world. For Hayley Shute, curator at Aussie Ark, growing claw size was a key indicator that 17 Eastern Quoll babies—whom she’d known since their days in mom’s pouch—were getting ready to explore a new land: mainland Australia.

This isn’t your average coming-of-age story, however. The Eastern Quoll, a carnivorous marsupial with a cheeky demeanor, went extinct on mainland Australia in the 1960s due to predation from non-native, feral cats and foxes. They are now only found in Tasmania, and are endangered there. Since 2017, Aussie Ark, with the support of Global Wildlife Conservation and other partners, has been building an insurance population of quolls at its 1,200-acre wildlife sanctuary in northern New South Wales.

In early May 2019, they released 17 of their 69 captive-bred Eastern Quolls into the wilds of Australia’s Booderee National Park. This is Aussie Ark’s first release of captive-bred quolls, and the second-ever release of quolls to the mainland. The first, also in Booderee, took place in 2018 and those animals are breeding successfully. When choosing which quolls to release to the wild, Aussie Ark looked at their lineage and selected for compatibility to prevent interbreeding.

“Opening those boxes to release the quolls was the highlight of my career, for sure,” says Shute, who’s been with Aussie Ark since it started. “I wish I could bottle that feeling I had, when the sun began to set and we knew it was time for them to begin their journey.”

The Eastern Quoll plays a critical role in the ecosystem. Its small size, sweet face and Bambi-like spots belie its status as a champion predator of insects and small invertebrates, some nearly as large as itself. Aussie Ark President Tim Faulkner has nicknamed it “the baby-faced assassin.” It’s a boom-bust species, meaning it breeds prolifically in times of good weather and rain. And when heavy rains bring insect outbreaks, the quoll keeps things in check--protecting local fauna and maintaining balance in the bush.

The Eastern Quoll is one of four quoll species in Australia, all of which are classified as either Endangered or Critically Endangered on the IUCN Red List of Threatened Species. 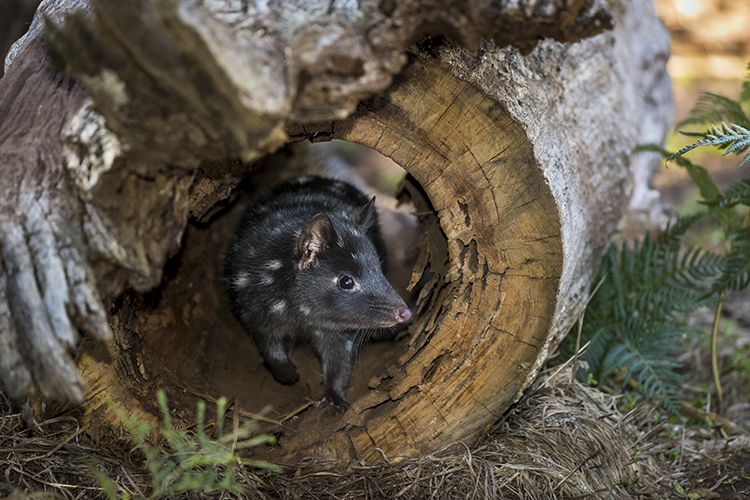 Aussie Ark’s managed conservation breeding and reintroduction program is designed to keep the Eastern Quolls safe from predators while giving them a chance to be as quoll-like as possible. The sanctuary is well-fenced so the quolls can have free rein. Caretakers supply the quolls’ food to ensure the right balance of nutrients and minerals at each life stage, but they put dinner out at night to minimize human contact. They also work with vets to perform regular weigh-ins and health checks, including “pouch checks” of pregnant mothers. This all creates a population that will serve as a perpetual species bank.

At Booderee, the quolls will still be safe from predators, thanks to a robust fox management program by Aussie Ark’s partner Rewilding Australia. But they’ll be on their own to find food and navigate their new home, although radio transmitters will help partner Rewilding Australia monitor their whereabouts. Just like sending a kid to college with a plea for them to call or text home once in a while, the quolls’ journey into the wild evoked a mix of parental pride and nostalgia among their caretakers. 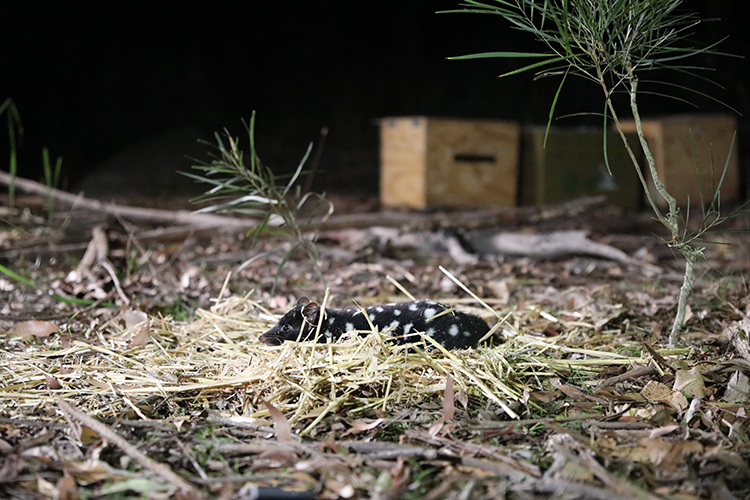 An Eastern Quoll immediately after release into the wild. (Photo courtesy of Aussie Ark)

“During the release, the quolls showed the personalities we’d come to know,” Shute says. “They were all cautious--which is a good thing. Some poked their noses out to slowly venture out on their own, and others needed a bit of encouragement.”

Taking lead from the Taz

Aussie Ark pioneered its conservation model through a successful Tasmanian Devil breeding program, which has built an insurance population of this iconic species in the Barrington Tops. Approximately 90 percent of the wild Taz population has been wiped out by Devil Facial Tumor Disease, a fatal contagious cancer. Aussie Ark will also release Eastern Quolls into the Barrington Tops later this year, marking the first time quolls have lived in the World Heritage Area in more than 100 years.

“We’ve found a middle ground with our model,” Faulkner says. “On one end of the spectrum you have zoos, where animals are in small enclosures with a lot of one-on-one husbandry. On the other end, you have all of Tasmania. Our approach not only keeps the animals free, safe and mentally healthy, but it’s also cost-effective.”

Aussie Ark’s cost of care per animal is about 15 percent that of a traditional zoo.

“Aussie Ark is focused on outcome-based conservation, which is critical--with the stakes so high, we need to move research into increased action,” says GWC President Don Church. “Australia is on the front lines of biodiversity loss, and Aussie Ark has the innovation and nimbleness to stem the tide.”

Releasing Eastern Quolls and other species to the mainland is important because Australia has the world’s highest mammalian extinction rate—at least 10 percent of its mammals have gone extinct since European colonization. Australia’s isolated location prevented large predators such as bears and tigers from coming over from other continents. Animals that aren’t found anywhere else evolved on the island, including the Koala, Kangaroo, Platypus and carnivorous marsupials such as quolls.

“Our mammals evolved for uniqueness, not intelligence,” Faulkner says. “When the smarter placental mammals were introduced to the mainland, our mammals just couldn’t compete. Foxes and cats are responsible for 92 percent of our mainland extinctions.” 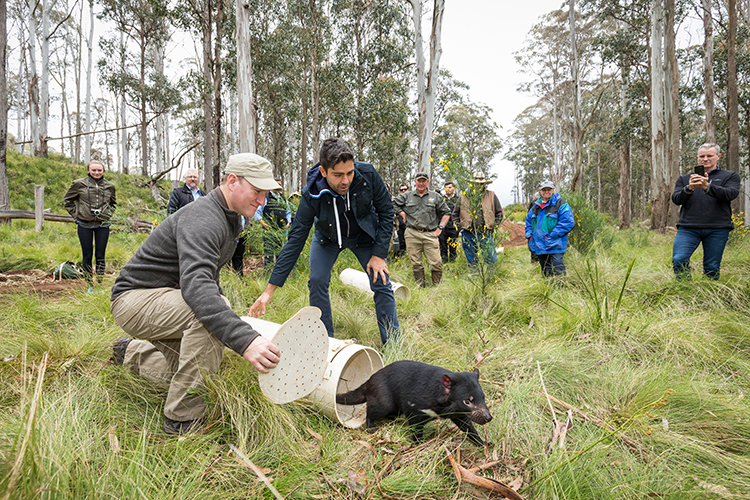 Aussie Ark’s long-term goal is to build a conservation community around cornerstone species, and to see its released animals flourish and to restore the mainland to its former ecosystem dynamic before European settlement. It’s a big goal, but that doesn’t intimidate Faulkner and his team.

“Don Church and Wes Sechrest from Global Wildlife Conservation have encouraged me to think big,” Faulkner says. “That’s one of the reasons why GWC is such a great partner for us. They support us not just with money but also with mentorship. They’re champions of measurement-based outcomes, and they want to see us thrive here in Australia.”

This project was also made possible in part by Rewilding Australia Director Rob Brewster.