Between The Stripes Part III: Unlocking The Rabbit’s Mysteries

The first time I saw a photo of the Annamite Striped Rabbit (Nesolagus timminsi) on the Internet, it was the distinguished tiger-striped fur that caught my attention. At that moment, I didn’t imagine that I would have an opportunity to conduct research on the species, or even maybe have a chance to encounter it in the wild. Little did I know how my path would cross with this species.

The Annamite Striped Rabbit (Nesolagus timminsi) is an elusive mammal species endemic to the Annamites mountain chain on the border of Lao PDR and Vietnam. This animal and its sister species, the Sumatran Striped Rabbit (Nesolagus netscheri), together form the genus Nesolagus. They are the only two rabbit species in the whole world that have striped patterns. To add to their mystery, researchers know close to nothing about the basic ecology and conservation status of the elusive species.

At the end of 2015, I took part in Courtesy of the Edwards’s Pheasant Project that funded by CEPF. The project aimed to search for the Edwards’s Pheasant (Lophura edwardsi) in the central Annamites, in Thua Thien Hue and Quang Tri provinces, Vietnam. During this more than one-year project, I gained a lot of experience, especially using camera traps as a method to determine the population status of wild animals. We had more than 10,000 camera nights in the research area, but sadly, we were not able to record an Edwards’s Pheasant. Instead, our cameras captured photos of the threatened Annamite Striped Rabbit. While looking at this special species and feeling extremely excited, I started to develop an idea to study this little-known mammal. 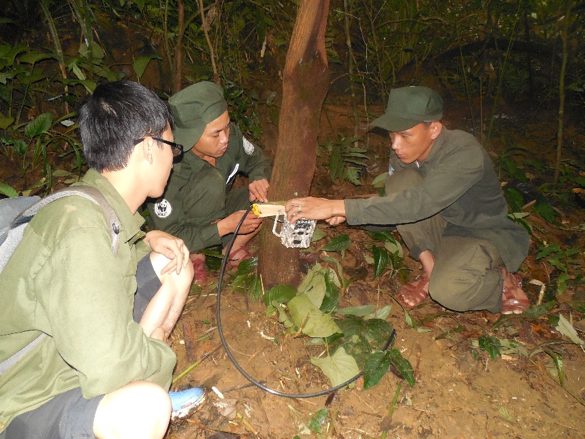 The Edwards’s Pheasant research was also my first time leading a project in the field. Thanks to this work, I met the field teams of the Leibniz Institute for Zoo and Wildlife Research (IZW), the IUCN, and Global Wildlife Conservation (GWC) in central Vietnam. Each of these organizations have been very enthusiastic to support me and share their invaluable knowledge on empirical field methods. As a conservation biologist who has spent most of my time in the lab, I faced lots of challenges from the beginning. Without the help of my colleagues, I would definitely not have been able to improve my skills at field work.

In January of 2017, I became a doctoral student at the Leibniz Institute for Zoo and Wildlife Research (IZW), and started to carry out my study on the conservation status and phylogeography of the Annamite Striped Rabbit in Vietnam. My research will be conducted in three protected areas in the Central Annamites in Vietnam: the Song Thanh Nature Reserve, Phong Dien Nature Reserve and Pu Mat National Park. I have undertaken both the systematic camera-trapping and the collection of terrestrial leeches for molecular work. My study will provide comprehensive data on the conservation status and ecological distribution of the species for the first time; and will also focus on clarifying the impacts of anthropogenic threats, in particular hunting/snaring, on its populations. We’ll use DNA sampling from leeches to reconstruct phylogeographic patterns and the evolutionary history of the species. 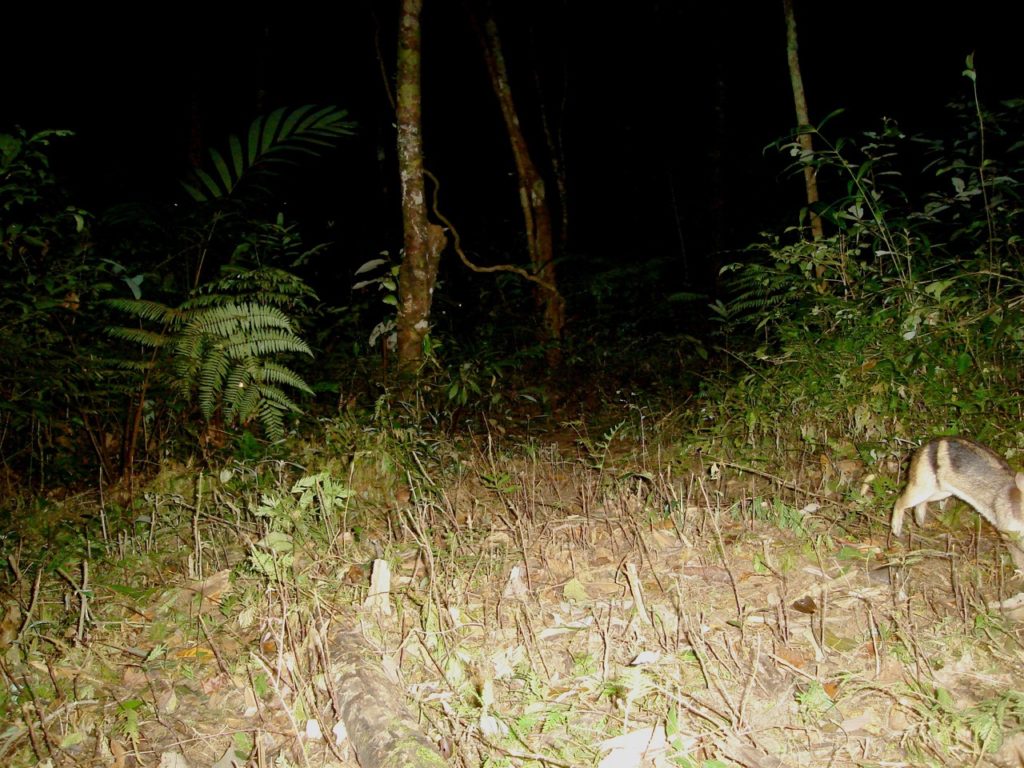 Annamite Striped Rabbit caught in mid-hop on a camera trap set deep in the forests of Laos. (Courtesy of Andrew Tilker)

Further, my colleague, Andrew Tilker (IZW and GWC), who has more than five years working on camera trapping surveys in Central Annamites, will also join in the detection of the Annamite Striped Rabbit across other protected areas in Vietnam and Laos using the same method. Such combined data will hopefully improve our understanding of the Annamite Striped Rabbit and elevate the efforts to conserve the species to a whole new level.

Vietnam has experienced a drastic decline in biodiversity in recent years. In addition to the Javan Rhino, which went extinct in Vietnam in 2011, other species are likely to follow, such as Saola (Pseudoryx nghetinhensis) and Edwards’s Pheasant (Lophura edwardsi). The Annamite Striped Rabbit will be one of the next species in line facing extinction. The conservation of these species has been severely affected by lack of information on their population status and basic ecology and, especially, the high level of anthropogenic threats. Delayed reaction to reverse the trend can result in fatal consequences. I am hoping the data generated by our study will assist conservation by clarifying population status, ecology, and vulnerability of the species to hunting pressure in the region.

Read part I and part II of GWC’s Between the Stripes series.

Thanh Nguyen Van is currently a doctoral student at the Leibniz Institute for Zoo and Wildlife Research (IZW), where he is a member of the Junior Research Group Southeast Asian Biodiversity and Biogeography. His research focuses on conservation of threatened mammals in Vietnam, with an emphasis on little-known and threatened species.