Between The Stripes Part II: A Rare Encounter

When I came to Vietnam five years ago, striped rabbits were the furthest thing from my mind. Oh, sure, I knew about Nesolagus timminsi—it was, after all, one of the recently discovered Annamite endemic mammals that had collectively drawn me to this region—but my focus was on Saola. And so I spent the next three years conducting intensive fieldwork with a fairly simple goal: searching for the last “Asian unicorn.”

To do this, my teams and I collected tens of thousands of bloodsucking leeches, hoping that one of them would contain the DNA of a Saola. But none of them did. So I never caught up with the Saola for what seems in hindsight like a simple reason—it isn’t there anymore. Not, at least, in the haunts where I was searching. But at some point, while wallowing in professional despair, I realized that my work had given me insight into the world of this small, tiger-striped lagomorph that is found only in the Annamites forests. Apparently leeches like to snack on rabbits.

And so the Annamite Striped Rabbit was initially something of a consolation prize in my mind: a fortuitous by-product of a long but unsuccessful Saola-search. But it became more. Over several field seasons in both Vietnam and Laos, we used a new survey technique—camera traps—and these unblinking eyes in the forest soon began to accumulate a surprising number of rabbit photos. We were gaining an unprecedented glimpse into the world of this elusive species. 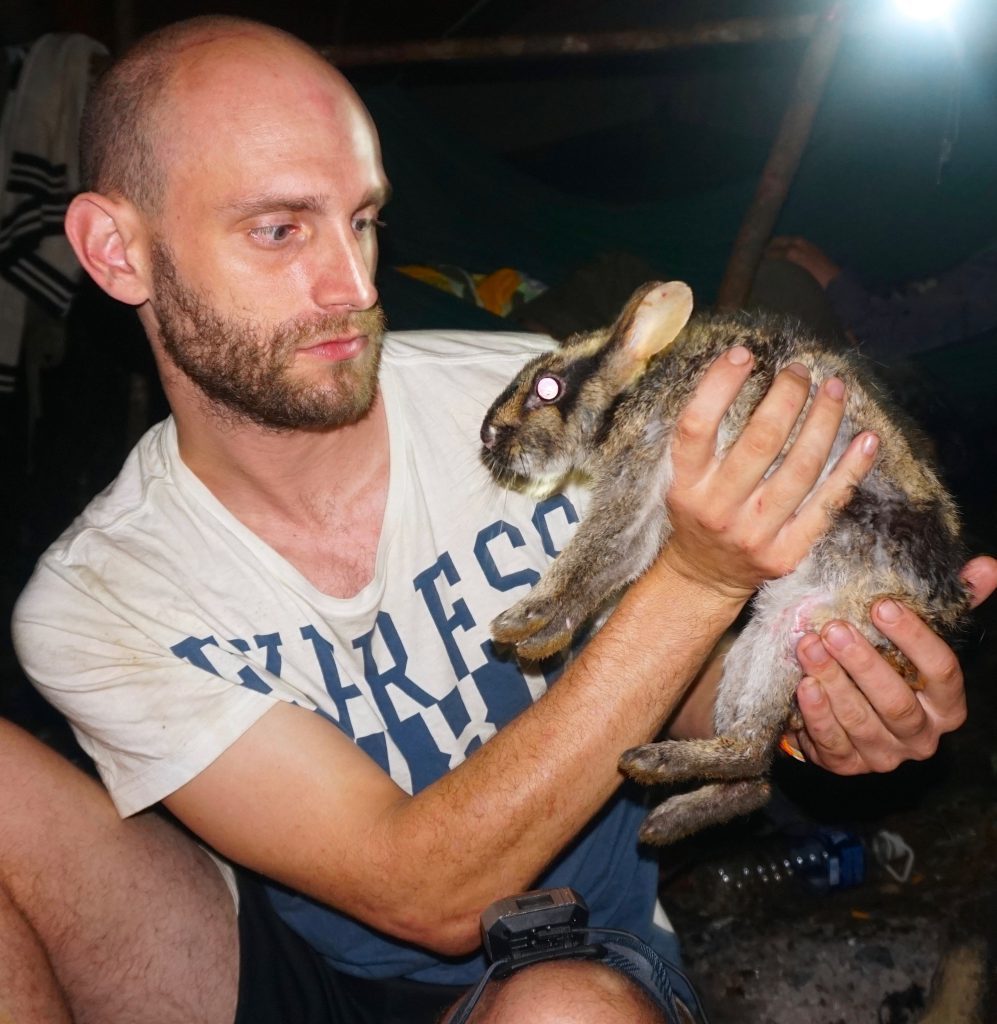 What’s more, nobody else to date had ever studied the ecology or distribution of the Annamite Striped Rabbit: it was uncharted scientific territory. If you’re a publication-starved Ph.D. student like me, someone who has to Make A Name For Himself through bouts of library-hermitage and statistics-driven insanity, then you know just how valuable this is. But the fascination ran deeper than career aspirations. Put simply, I was awestruck at the elegance and splendor of this remarkable creature, as revealed through our camera trap images.

If a picture is worth a thousand words, then how much is an encounter worth? I wouldn’t trade a rendezvous with an Annamite Striped Rabbit for anything in the world—including all the publications in all the stuffy scientific journals you can think of. And that is exactly what happened late one summer night deep in the jungles of central Vietnam. I awoke late with my Katu guides shouting “con tau, con tau!” I leapt out of my hammock, hoping to catch a fleeting glimpse of the rabbit as it dashed away in the undergrowth, but to my surprise saw my guide cradling a rabbit in his hands. It was a thing of beauty. The base coat was buff tan, and black racing stripes spilled down its flank. The rump was orangish-red. The eyeshine in my flashlight was a glossy purple. I admired it for several minutes, oblivious to the constant chatter around me, captivated by the magnificence of the animal before me. It was a scientific marvel, yes, but putting strict science aside—it was evolutionary artwork. We released the rabbit but I stayed up late that night staring into the fire and reliving the wonder of the moment. 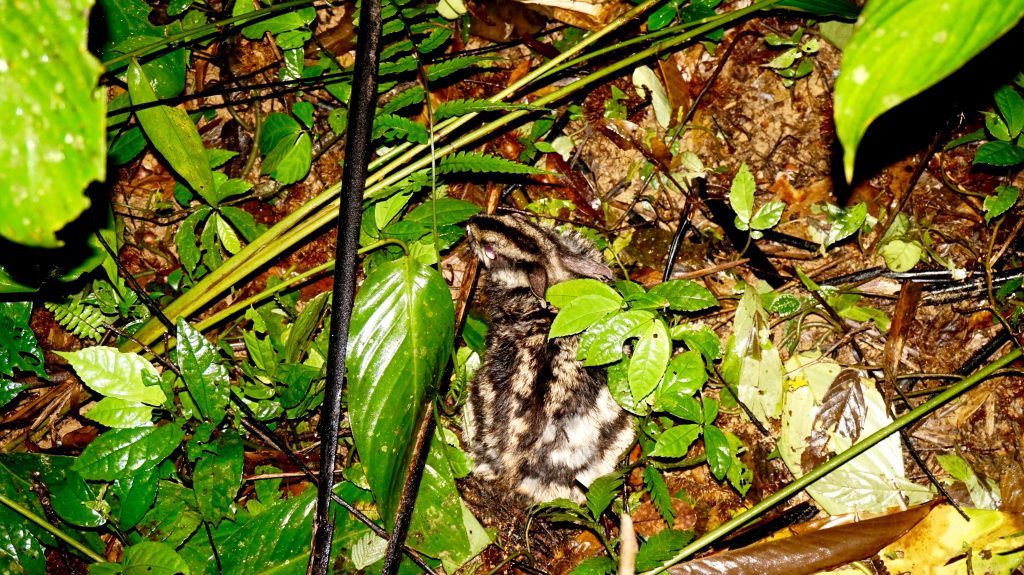 Our camera trapping continued, across three protected areas in Vietnam and then into a rugged and remote area of adjacent Laos. Every time we got a rabbit photo I became more entranced. Now I am back in Berlin, analyzing our data and writing up my thesis. My first paper will be, I am thrilled to say, on the Annamite Striped Rabbit. It will be a scientific first. But while our data has yielded valuable insight into the basic ecology and distribution of the species, it has also raised conservation concerns. The species seems to be present at low densities in some remote and actively patrolled regions, but rare or absent in heavily snared areas without law enforcement. Unfortunately, the latter is the norm for most, if not all, protected areas in both Vietnam and Laos, which are no more than paper parks.

The Annamite Striped Rabbit is probably in much more trouble than most people realize. It is nowhere near as rare or threatened as other Annamite endemic species such as the Saola or Large-antlered Muntjac—which isn’t saying that much since, those species are on the verge of extinction—but it is certainly on the way out. If current poaching trends continue, it will be gone. Soon.

Although I still remain actively involved in Saola work, my focus has shifted much more to a small forest-dwelling rabbit that most people have never heard of. And that is okay with me. Discovering the magic of the Annamit Striped Rabbit has been the most unexpected but fortuitous turn in my biological career. I hope to work on the species for many more years to come. But to do that, we will all have to work together to ensure that it survives in the Annamites forests. The world will be a much bleaker place without it.

Check back in August for the final installment of our Between the Stripes series. (Read part I)