“When you are eye to eye with a wild cat, the whole world stops,” wildlife photographer Sebastian Kennerknecht writes on his website. Kennerknecht is a wildlife and conservation photographer—and fellow of the International League of Conservation Photographers—who focuses on endangered species, with a particular affinity for wild cats. He has photographed a quarter of the world’s wild cat species. This week Kennerknecht is taking over our Instagram account in celebration of small cats and GWC’s efforts to conserve them. You can see more of Kennerknecht’s work here.

We caught up with Kennerknecht about his mad photography skills and his love for wild cats.

Q. When were you first drawn to wild cats, and why?

A. Early on, as I was growing up in Munich, Germany I always loved going to the zoo. My favorite “exhibit” was the wild cat arena. In all honestly they were terrible concrete cages, but I was always there by myself because the strong odor of cat pee kept most people away. I couldn’t keep my eyes off of the powerful cats as they paced back and forth. I just felt a very close connection to them. When their eyes met mine, I felt like they allowed me to look into their soul, and vice versa. Wild cats also embody things that I feel I am not: stealthy, extremely strong, and solitary.

After moving to the United States, my path was always headed toward wild cats: the college I attended (see next question), the woman I fell in love with (also a huge wild cat fanatic), and my first assignment on Arabian Leopards. 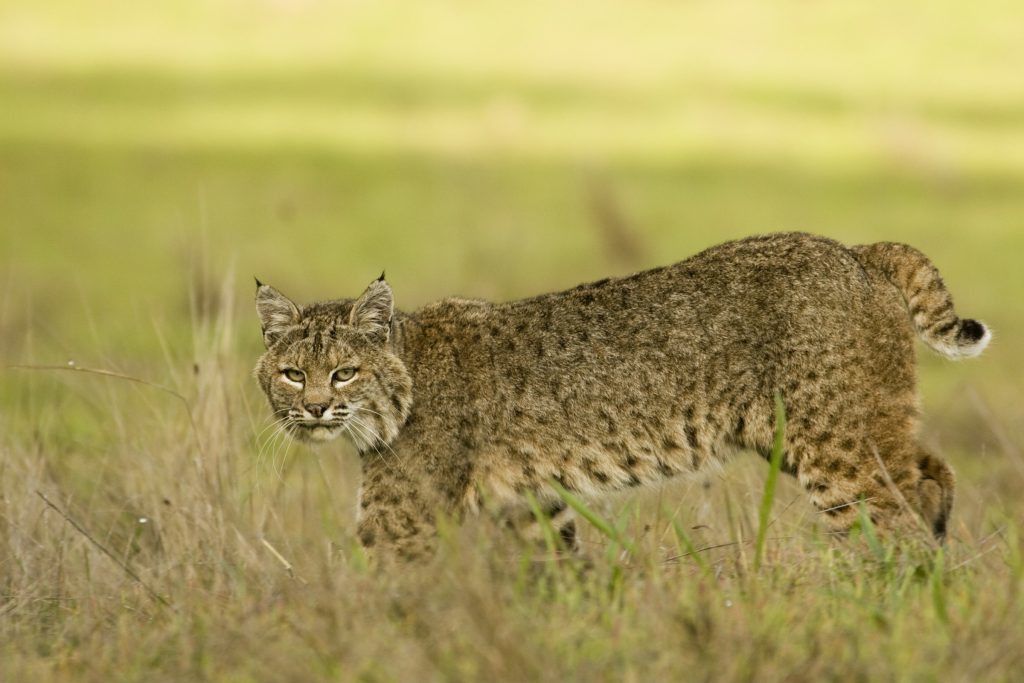 Bobcats are one the most well-studied small cat species in the world. Compared to other small felids, bobcats are also more often seen by people. Photo by: Sebastian Kennerknecht

Q. What was your first experience trying to photograph a wild cat?

A. I was lucky enough to go to the University of California, Santa Cruz, a college that is built into the redwood forest of northern California and is surrounded by grassy meadows. I quickly found out Bobcats were living on campus grounds and it became my mission to find and photograph one. I read every article, scientific paper, book I could to better understand their ecology and where and when to look for them. I’d look for them in the morning, between classes, and in the evening. I was obsessed. After about a month I saw my first Bobcat, nonchalantly walking on a trail at 10:30 in the morning. I couldn’t believe it.

A year later I encountered a mother with her nearly full-grown kitten. For two weeks, they allowed me to be with them, getting to watch mom hunt, while the kitten watched. Sometimes they’d both be sleeping less than 10 yards away from me. That was the moment of no return, I was hooked on wild cats and knew I was going to focus on them for the rest of my life.

Q. Has it gotten any easier to photograph them?

A. If anything, I’d say it has gotten harder. Bobcats are relatively easy to see, as in you can actually see them sometimes. Most species of wild cats, particularly the small cat species are seemingly invisible. Even biologists I have worked with that have studied animals like the African Golden Cat, or Andean Cat have never seen the their study species with their own eyes, after a decade of researching them. This meant that by necessity I learned how to use SLR camera traps early on. These are basically cameras that sit in the wild, and are triggered when an animal walks by. Some people think that makes it easier, but that is far from the case. Take a Snow Leopard for example. Your job is to get a photo of one. Snow Leopards have an average of around a 60-square-mile home range and your camera trap covers a few feet of space. Placing your camera trap in the right spot, and getting a good photo of the cat if and when it comes by, is the result of a lot of research, natural history knowledge, understanding exposure through cameras and flash, and yes, some luck. 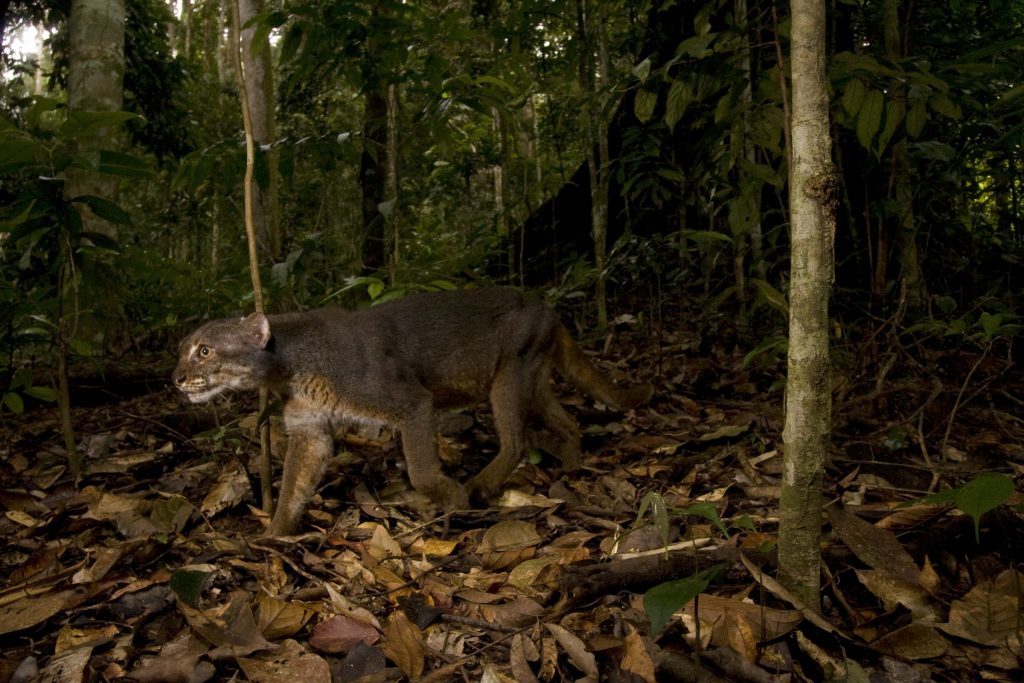 The Bay Cat is so rare and and so elusive that the majority of the biologists studying the species have never seen it with their own eyes. Photo by: Sebastian Kennerknecht

Q. Are there times when you have just had to give up, without the shot? A. There have been three assignments where I didn’t get the photo of the cat (not that I am counting), but I don’t give up. I returned to each of those places, until I got the photograph of the cat. Wild cats, especially many of the small cats, take an extreme amount of patience and persistence. I gladly admit I am fanatical about wild cats, but I think that is what it requires to get good photos of them that can be used for their conservation.

Q. How does it feel to return to a camera trap to find that you have struck gold?

A. When you walk up to a camera trap, you will experience a mix of emotions. Excitement, fear, anxiousness, nervousness. Sometimes you almost don’t even want to check the camera, in fear that you didn’t get anything, because most of the time, that’s the way it is. So when you do get a photograph of a cat, walking the right direction, with all the flashes having fired correctly, you are overwhelmed with pure excitement. I have been known to do rather loud and obnoxious happy dances at my camera traps when it all comes together.

Q. What do you want people to know about wild cats?

A. Wild cats are such incredible animals on an individual level. Getting to watch mother pumas play with their young or seeing lions hunt together as a pride gives you amazing insights into the personalities and complexities of these animals. But even more importantly, wild cats act as umbrella species. If you protect those 60 square miles of the Snow Leopard mentioned above, you protect every single animal that uses that same area. Wild cats, especially small cats, occupy more than two-thirds of the world’s land mass. Save them and you save the terrestrial planet—it is as simple as that.

(Top photo: This photo was taken at 14,000 feet, in the High Andes of Bolivia. Though it looks like a kitten to most people, this is in fact a fully grown Pampas cat, probably weighing around ten pounds. Photo by Sebastian Kennerknecht)