Brooklyn-based artist Eric Losh is no stranger to Global Wildlife Conservation. For several years he has used his talent to design the beautiful holiday cards for GWC partner Saola Working Group, and he is author and illustrator of “Wonders of the Annamites,” a children’s book that highlights the beauty of the species GWC works to save on the border of Laos and Vietnam. He also created the monkey hug e-valentines this year to raise money for GWC partner the Muriqui Project of Caratinga. Most recently Losh has worked with another GWC partner, Small Cat Advocacy & Research, in Sri Lanka on educational illustrations of small wild cats and their habitats. Check out his work at www.elosh.com.

We had an opportunity to chat with Losh about his love for lesser-known wildlife species, the role his artwork plays in conservation and his most recent projects: 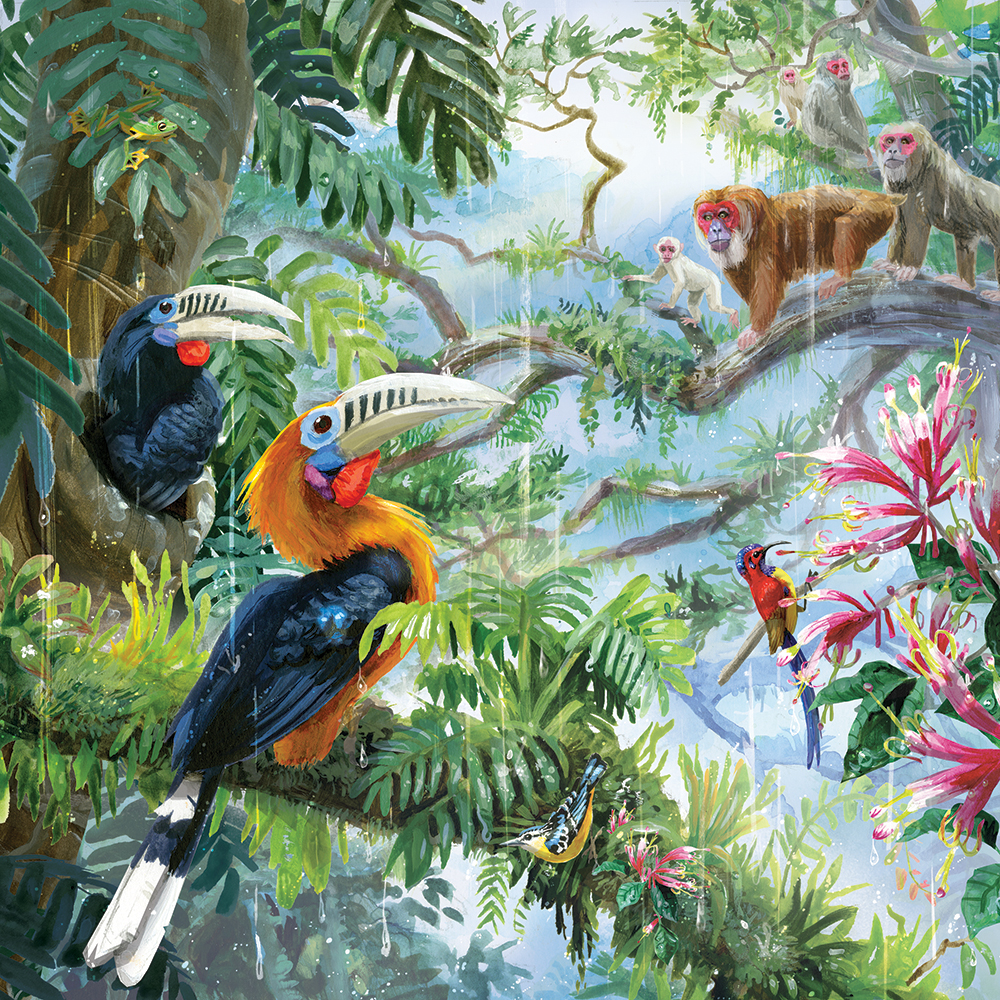 Q. What role can artwork like yours play in helping people appreciate endangered and rare species?

A. My mission is to be able to use my artwork to cultivate curiosity and a love for nature, especially in children. There are so many incredible animal species across the globe, and I seek to shine a light on those that are endangered, rare or relatively unknown to the general public. It’s through my illustrations that I can educate, inspire and empower. I think that an important aspect of my artwork is that it can be a gateway into the science/conservation world and an opportunity that my audience might not otherwise have to learn about an animal in which with they share a planet, or in some cases, a backyard.

When people get inspired by animals and learn about the threats facing them, they can start to change their attitudes and behaviors that may be contributing to the decline. There are many actors that have a role to play in conservation, and my role is focused on getting people interested in animals from a young age, and helping to being a catalyst for a generational shift in general attitude and awareness toward wildlife and environmental concerns. 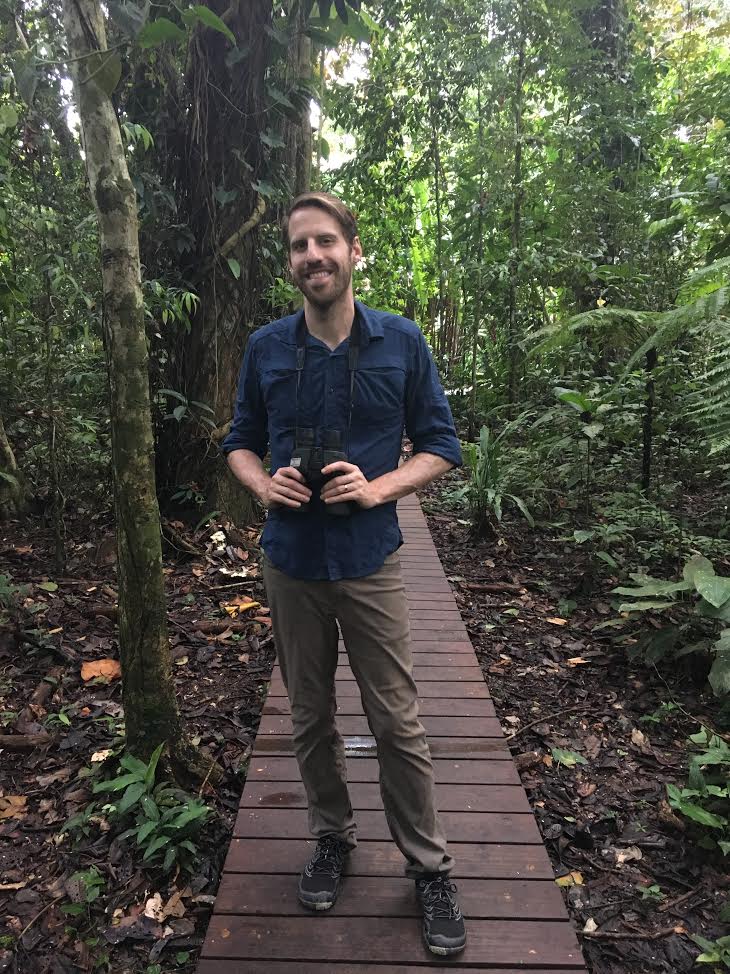 Q. Where do you get the inspiration for your artwork, and what do you hope people feel when they see it?

A. I get inspiration for the subjects from a lot of reading about wildlife, watching documentaries, and from the excitement of being out in nature and observing animals directly. It’s so rewarding to take time to be out in the forest, a local park, or just a backyard to be still and quiet and just observe nature. The world around you comes into focus, and you get these moments of discovery. That’s what I hope my artwork can do for people when they take the time to look at all of the little details that I include. The inspiration behind many of my illustrations also comes out of the knowledge that the animal subjects all have lives, families, motivations, histories and personalities. I want people to connect with the animals’ life stories through my illustrations.

Q. How did you develop your love of animals? How did wildlife become the focus of your artwork?

A. My love for animals developed at a really young age, sparked by my family’s annual trips to the mountains in our home state of West Virginia. I was lucky to have the opportunity to observe everything from songbirds and salamanders to deer and even bears. Nature was ingrained into my early learning, and has been an obsession ever since.

As for my artwork, the advice that I got in art school was to “paint what you know.” I had been drawing animals since I was a child, so as my artistic practice developed, it was natural that I gravitated toward wildlife illustration. It’s my way of sharing and interpreting my own excitement for nature back to the world. When I’m writing and illustrating picture books, my main goal is to create the art that I would have been inspired by when I was a kid. With each piece, if I can get at least one person as excited about nature through my artwork just as I was by artists before me, then I’ve done my job. 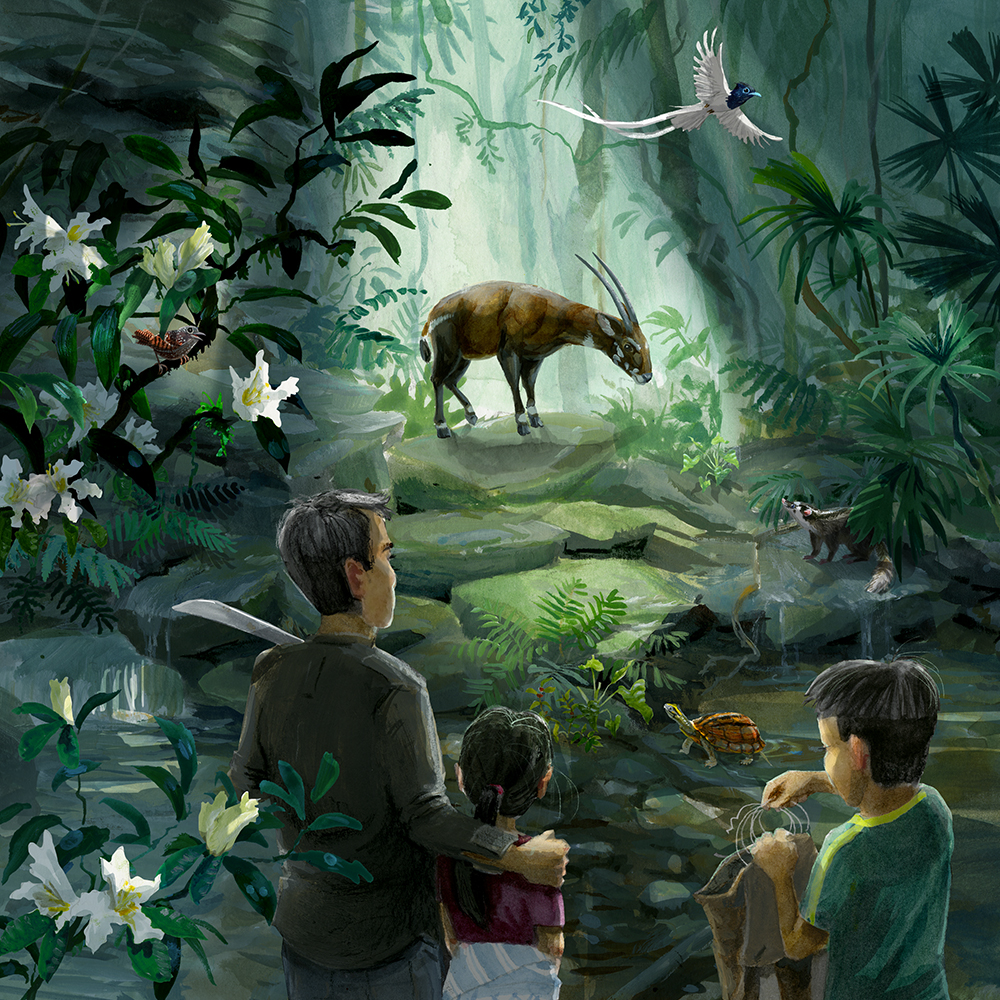 Q. How did you develop your interest in the species of the Annamites specifically?

A. A few years ago I watched a talk online that was given by Bill Robichaud, coordinator of the Saola Working Group (SWG) and GWC’s Saola Conservation Program, about the work being done to protect the endangered Saola in Southeast Asia. I had been fascinated by the Saola for a few years, but I had not known about its significance as a flagship species within the Annamite Mountains of Laos and Vietnam. I reached out to see how I could help, and Bill gave me the opportunity to create the artwork for SWG’s holiday card, which has turned into an annual project. I’ve been able to learn a lot about the ecology of the Annamites from this work, and I was eager to stay engaged. 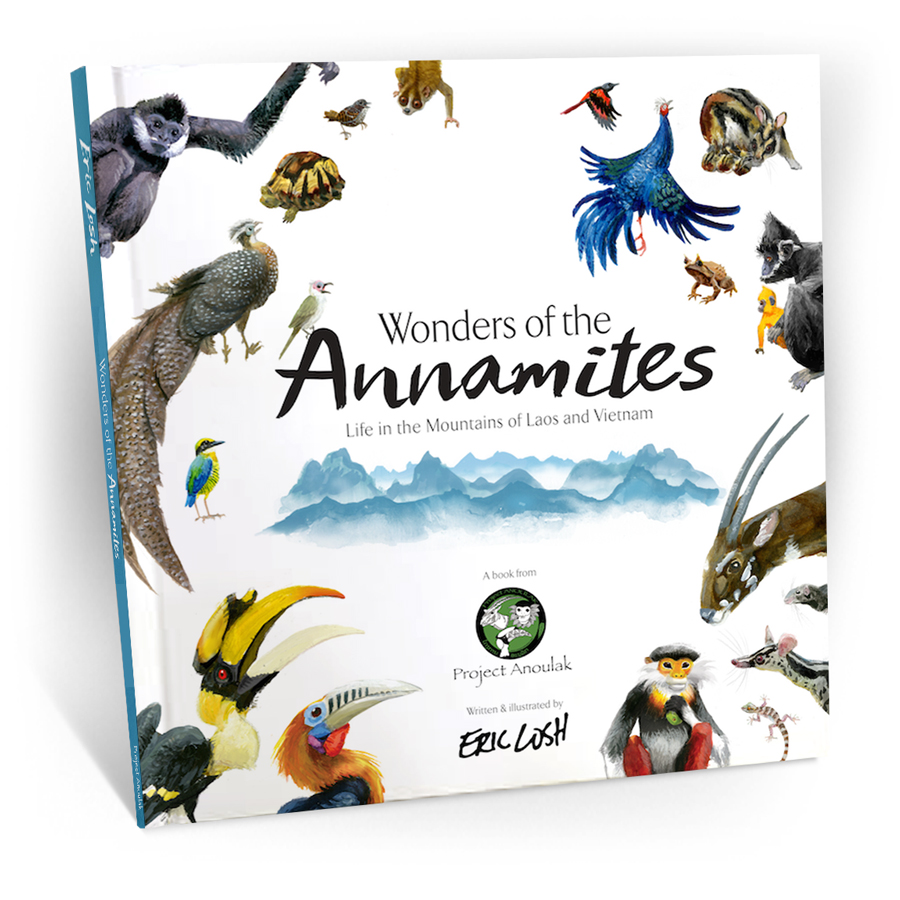 In 2015, Bill connected me with a colleague, Camille Coudrat, who was interested in developing a children’s book for her NGO, Project Anoulak. With her partnership, scientific expertise, and project funding, I went on to write and illustrate “Wonders of the Annamites,” which is the first children’s book to exclusively feature the wildlife found in the Annamites. The book features 60 animal species and the diverse mountain habitats in which they live, as seen by a Laotian family as they travel through the highlands to visit their grandmother. I’ve self-published the book in the United States in English, and Project Anoulak has released it in French, Lao, and Vietnamese. It’s been an extremely exciting project to work on, and I’m honored to bring the animals of the Annamites into the public eye. It’s especially rewarding to know that we’ve created a book that will be enjoyed by Lao and Vietnamese children that can instill pride and compassion for their local fauna.

Q. What is your favorite wildlife species, and why?

A. This is always a hard question, as there’s no way I can narrow it down to one! The Saola is definitely my favorite species from “Wonders of the Annamites,” as it so beautifully epitomizes the mystique of the region. Even though it’s such a large mammal, the rest of the world didn’t know about it until the ‘90s! But I’m also just as intrigued by the acrobatic gibbons who sing at daybreak, the colorful and prehistoric-looking hornbills, and the cat-like Owston’s Civet. Many of these animals are just so completely different from the animals that are seen in traditional children’s books, and I was excited to present them to a whole new audience in this book. 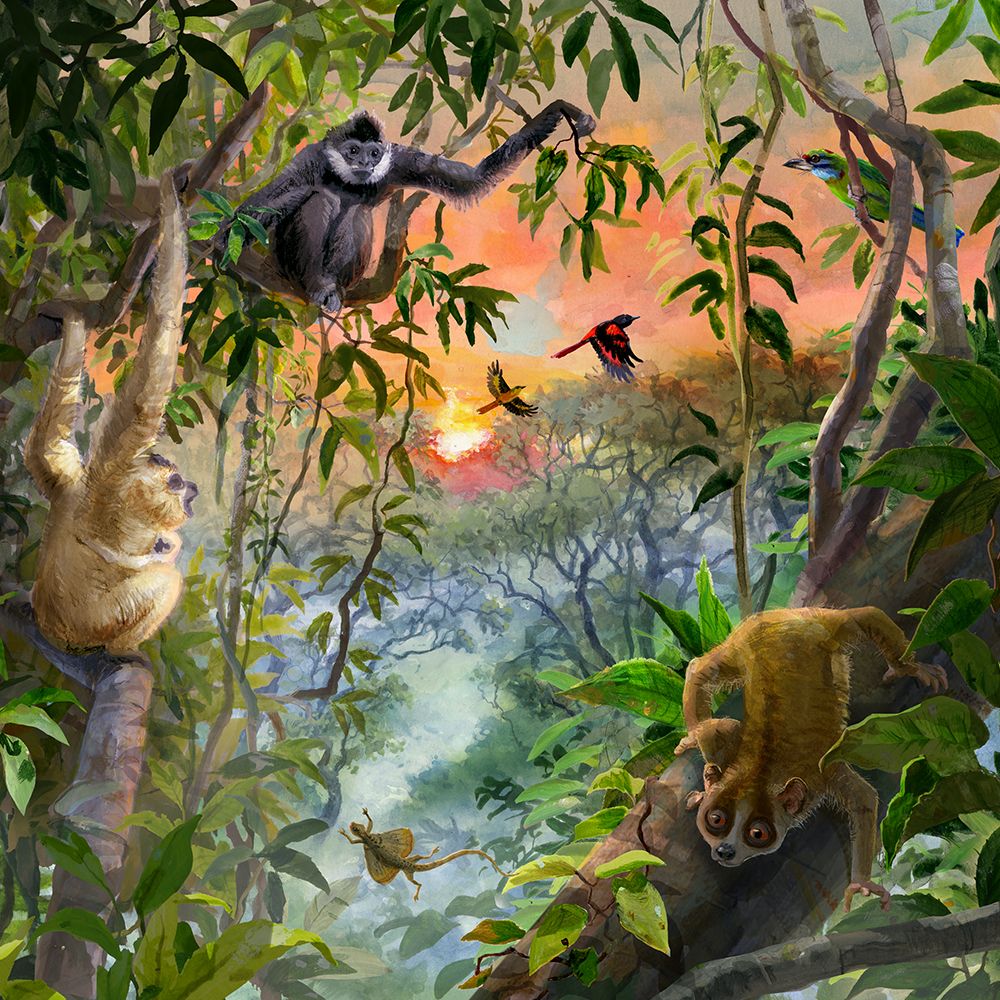 I also have a strong interest in primates, which I explored in my first children’s book “The Chorus of Kibale,” about a Red-tailed Monkey in the Kibale Forest of Uganda. During my research for the book, I came to discover the varied monkey species across Africa known as guenons. From golden, blue, spot-nosed, and red-eared to red-tailed, sun-tailed, owl-faced and moustached, they’re the most colorful genus of monkeys. There’s something about coloration and variations on a theme in the animal world that I’m really attracted to illustrate. I think this is why my wife and I also enjoy birding, which we regularly do in our local park in Brooklyn. Whether it’s birds or monkeys (or frogs, fish, cats, etc.), there are endless combinations of colors and patterns in nature.

Q. What are some of your most rewarding projects, and what’s next for you?

A. My most rewarding projects have definitely been my illustrated children’s books. I’ve loved the freedom and all the possibilities that came with creating the original stories and casting my own “characters” into the pages. I spend a long time researching species, plants, habitats, and animal behaviors, as I seek to translate those learnings into words and pictures that could be enjoyed by all ages. I’ve been fortunate to have NGO partners who have spread the stories across the world to readers in countries from Laos, Vietnam and France, to Uganda, Mexico and Denmark. All the work and time invested in my work is worth it when I get pictures and stories from friends and fans about their children or students who have fallen in love with the books. 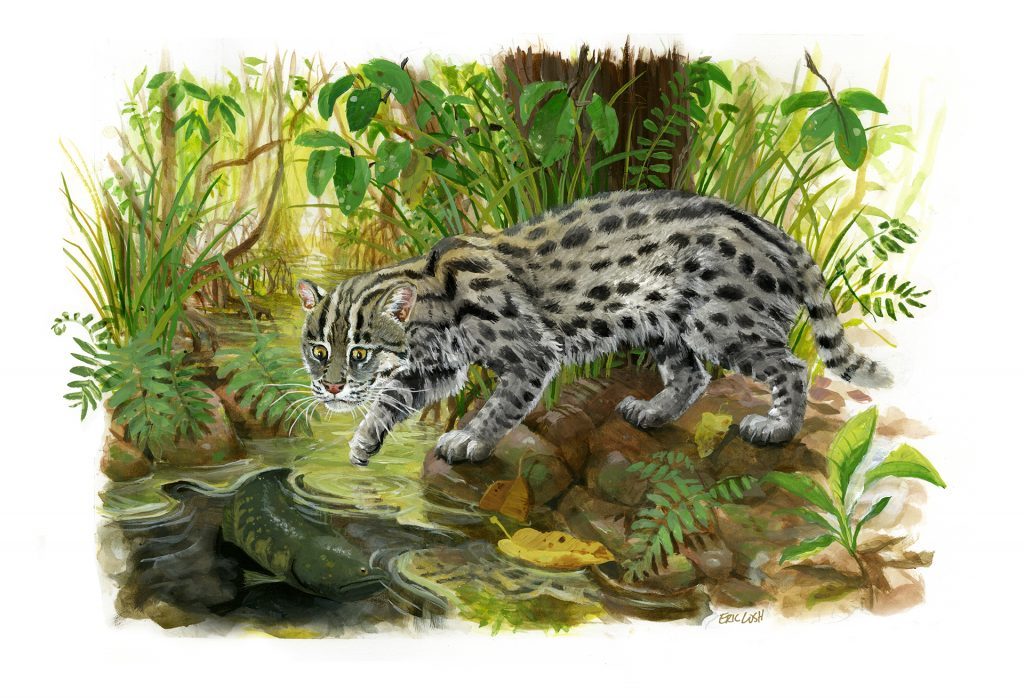 As for current projects, I’ve just finished some wildlife illustrations that I’ve been really excited about for a new NGO called Small Cat Advocacy & Research (SCAR) based in Sri Lanka. The organization works to better understand and educate locals about the lesser-known wild cat species that are found outside (and often inside) the capital city of Colombo. I’ve painted large scientific illustrations of the Fishing Cat, Jungle Cat, and the Rusty-spotted Cat and their habitats that will be used for identification and education purposes.

It’s always hard to tell what I’ll be working on next, and that’s part of the excitement. I have many character ideas for storybooks ranging from Panamanian sloths to Bornean Orangutans to African Forest Elephants, and I’m always on the lookout for the next great opportunity to create work that gets people excited about wildlife.

(All artwork by Eric Losh)