On three small islands off the New Zealand coast, the world’s biggest parrot has been having a tumultuous year: its most successful breeding season on record, followed by the sudden emergence of a deadly disease.

In the span of a few months, the 142 adult Kākāpō (Strigops habroptilus) left on Earth were joined by 86 new chicks. Although not all will survive to adulthood (72 are still alive as of this writing), this is a remarkable feat for a species that only decades ago was feared extinct.

Then in May, a fungal infection called aspergillosis was found among the Kākāpō population; it has already been responsible for several avian deaths. But while this mysterious illness may be a step backward for the future of the species, the Kākāpō’s human guardians have faced challenges before.

The world’s only flightless parrot, the Kākāpō — one of GWC’s priority species — was once a common sight in New Zealand’s forests. Then years of habitat destruction and predation by invasive species including cats, rats and stoats almost wiped them out. With only 18 known birds (all males) left by the early 1970s, the species was considered functionally extinct due to its unsustainable population. However, in 1977 a team of wildlife rangers discovered another population on Stewart Island, reviving hope for the birds’ future. 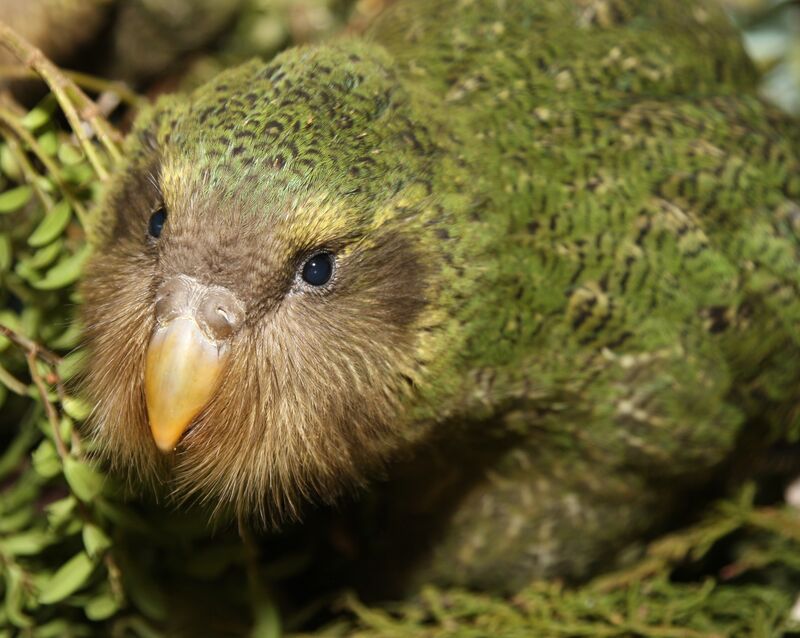 Although New Zealand is undergoing a massive initiative to rid the country’s two main islands of invasive predators by 2050, that timeline may be too late for the Kākāpō. Through its Kākāpō Recovery Programme, New Zealand’s Department of Conservation (DOC) has relocated the remaining birds to three small predator-free islands and is actively managing their breeding until the population is stable.

Although the parrots roam freely on their island homes, each bird wears a radio transmitter “backpack” allowing DOC rangers and volunteers to monitor them and maximize reproductive success.

Kākāpō only breed successfully when endemic Rimu trees (Dacrydium cupressinum) bear lots of fruit, usually every two to four years. Fortunately, the 2019 season was a “mast year” that produced a fruit bumper crop, leading some parrot mothers to begin breeding early enough to lay two clutches of eggs within one season.

When the food supply is low or other factors threaten chick survival, DOC staff will hand-rear the Kākāpō chicks, training them to shelter from the rain, climb trees and identify food sources.

Technology is also giving a boost to the time-honored practices of breeding and raising chicks.

Kākāpō have traditionally suffered from inbreeding, which leads to a lack of genetic diversity. The DOC recently finished mapping the genome of all living Kākāpō, which should help the rangers enhance breeding success by improving understanding about the genetic variability among individual birds and the causes of infertility.

As part of this effort, the DOC has been experimenting with artificial insemination to diversify the species’ gene pool. The quicker a sperm sample is inseminated, the more likely that it will successfully yield a chick — a reality that has led to an unusual experiment.

“We used the drone once this season to transport sperm,” says Deidre Vercoe, the operations manager for the DOC’s Kākāpō/Takahē team. “It’s great to know that this is a possible tool for the future. It’s much quicker than walking the sample for several hours across the island.”

Fake eggs are another tool the program is testing to increase the birds’ odds of survival. Once eggs are laid, rangers remove them from wild nests to be incubated in a more secure environment, temporarily replacing them with 3D-printed “smart” eggs. These eggs produce sounds that mimic the ones chicks make just before they hatch, preparing the female Kākāpō to tend to their newborn offspring.

The people who make it possible

Despite incredible progress, the species is not out of danger yet; it remains classified as Critically Endangered by the IUCN Red List of Threatened Species, and the recent aspergillosis outbreak continues to pose an urgent threat.

Although aspergillosis spores are common in the environment, they typically only cause disease if individuals have reduced immunity and/or there is a high concentration of spores in one location. One hypothesis is that this outbreak was caused by significant spore concentrations in nests on the island of Whenua Hou. According to Vercoe, the disease is “difficult to diagnose early, difficult to treat and often fatal. Kākāpō Recovery is working with others to understand the underlying cause and to prevent as many future cases as possible.” [MAKE A DONATION TO SUPPORT THESE EFFORTS TODAY]

The DOC’s ultimate goal is a wild population of at least 500 Kākāpō — a target that seems within reach with the continued hard work of many dedicated rangers, volunteers and donors.

Bronwyn Jeynes, the Kākāpō ranger for advocacy and logistics, says she has “really enjoyed getting to interact with members of the public, either answering inquiries or showing them Kākāpō, especially kids. People just become entranced by these birds, and the enthusiasm is infectious.”

GWC Chief Scientist and CEO Wes Sechrest visited the Kākāpō project in 2017, where he was charmed by a Kākāpō named Horton and impressed by the drive of the whole Kākāpō team. “Humans have pushed wildlife to the brink,” he says. “And very often, committed humans are necessary to bring species back.”

Jeynes, a donor-turned Kākāpō ranger, epitomizes that drive. “I’ve helped to transport chicks who’ve been sick or had to be hand-reared back out to the islands for release. It’s wonderful to see them go back to the wild … knowing that you helped them to get there and that now they’ll have the chance to return to where they belong and to become the next generation of Kākāpō.”