A Close-Up On The Wild World Of Camera Trapping

By Global Wildlife Conservation on October 17, 2018

Occasionally a wildlife “selfie” will go viral, delighting the world with a candid glimpse of tiger cubs wrestling or penguins dancing. These shots are one in a million—literally. All over the world, our conservationists and partner organizations are using thousands of camera traps to capture millions of images of animals. Most are your basic “scurrying down a path to get a snack” or “sipping from a stream” kind of shots, and we see a lot of blurry rear ends.

This camera-trap image of “cheeky” pine marten was the winner of our 2017 #WildlifePhotoFail contest. (Photo by Terry Whittaker)

That’s okay because we’re not going for gallery-worthy images—although we’ve snapped some pretty cool shots, including in Vietnam’s Pu Mat National Park and the Talamanca region in Costa Rica and Panama, which we’ll be sharing on the blog this week. Camera trapping is more of a numbers game. We go into a remote area, affix heavy-duty, weatherproof cameras to trees and set them to automatically capture animals and humans in motion. From there it’s about collecting enough imagery—and associated data—to establish baseline animal populations, track poaching activity, measure the success of conservation programs and plan future strategies.

Occasionally we’re also able to establish proof of life of a rare and elusive animal. In April 2017, a GWC-supported camera trap in Vietnam’s Lang Biang Biosphere Reserve caught a rare photo of the Large-antlered Muntjac, revealing the park’s potential for saving this Critically Endangered barking deer. 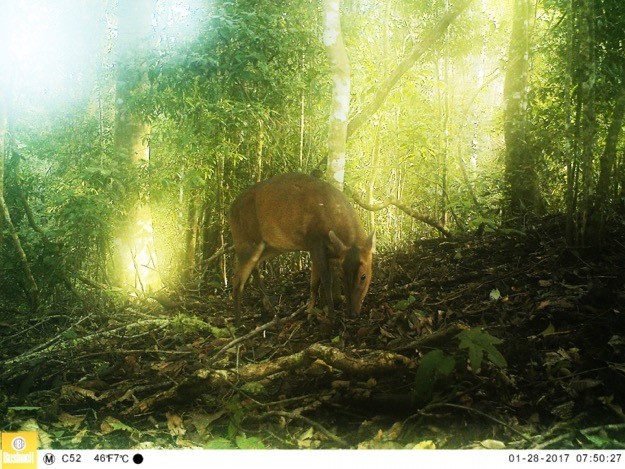 “Camera traps give us a glimpse into the natural world we couldn’t get without technology,” says Dr. Barney Long, GWC’s senior director of species conservation. “Pictures are great assets for conservation. They show people what’s going on in the forests behind them and instill a sense of pride. That’s especially motivating for rangers—imagine if it was your job to protect an animal you’d never seen!”

While rare discoveries are exciting, the bulk of our camera trapping work is about establishing baselines, especially among mammals. After all, you can’t manage what you can’t measure. We count adult animals and babies, track reproduction rates and map distribution patterns. This can help us work with our partners to define the parameters of a protected area and decide what success looks like. We can then continue to track animals to determine if conservation initiatives are spurring population growth or slowing down population declines. We currently have camera traps or work with partners on camera trapping in at least 18 countries. 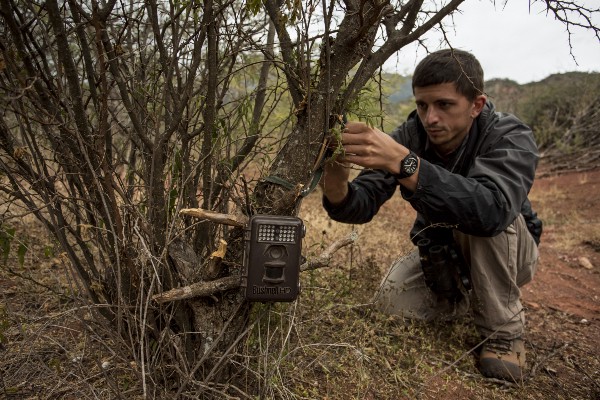 GWC’s Chris Jordan sets a camera trap on the side of a trail in Argentina’s Condor Valley. (Photo by Robin Moore)

Similarly, camera trapping helps us work with partners to shape anti-poaching programs. We can capture humans on camera to identify how frequently they’re encroaching on habitats, and to identify poaching hot spots. We use this information to target our enforcement resources, and to measure their success. If we spotted 20 poachers and only two were arrested, we still have work to do, for example.

Camera trapping yields a lot of photos—we may have 10,000 shots after a 6-month project. We must catalog all of these photos; extract relevant data about species, individual animals and locations; and then analyze the data to glean actionable insights. While much of this work is still performed manually, technology is automating more and more of the process.

Dr. Jim Sanderson, GWC’s program manager of small wild cat conservation, has been on the forefront of camera trapping’s digital transformation. Since 2001, he has personally developed and written more than a dozen apps, collectively called CameraSweet, that work together to sort, store and analyze camera trap images. The programs are all open source, free to download at smallcats.org and used by leading conservationists across the globe.

“Our goal was to eliminate the need to enter camera trap data by hand from a keyboard,” Sanderson says. “Our experiments showed there was a high data entry error rate—7 percent in the first hour, with errors increasing every hour after that.”

Cloud computing and big data analytics are pushing capabilities even further. GWC is working with partners on a range of technology-based solutions including algorithms that can detect individuals of specific species to support intensive monitoring of highly threatened populations, and human identification that enables pictures to be sent in real-time to rapid response teams. We are also working to integrate camera-trap photos into SMART, which is a software program for park management built by a partnership of nine conservation organizations, including GWC.

As the more of our world connects digitally and shares data, we’ll look for ways to harness this technology to drive progress in conservation. And of course, we’ll share those adorable animal selfies along the way.